Skip to content
Sign up for our newsletter
section-ads_high_impact_1
BY BUCK WARGO REAL ESTATE MILLIONS
May 17, 2022 - 12:00 pm 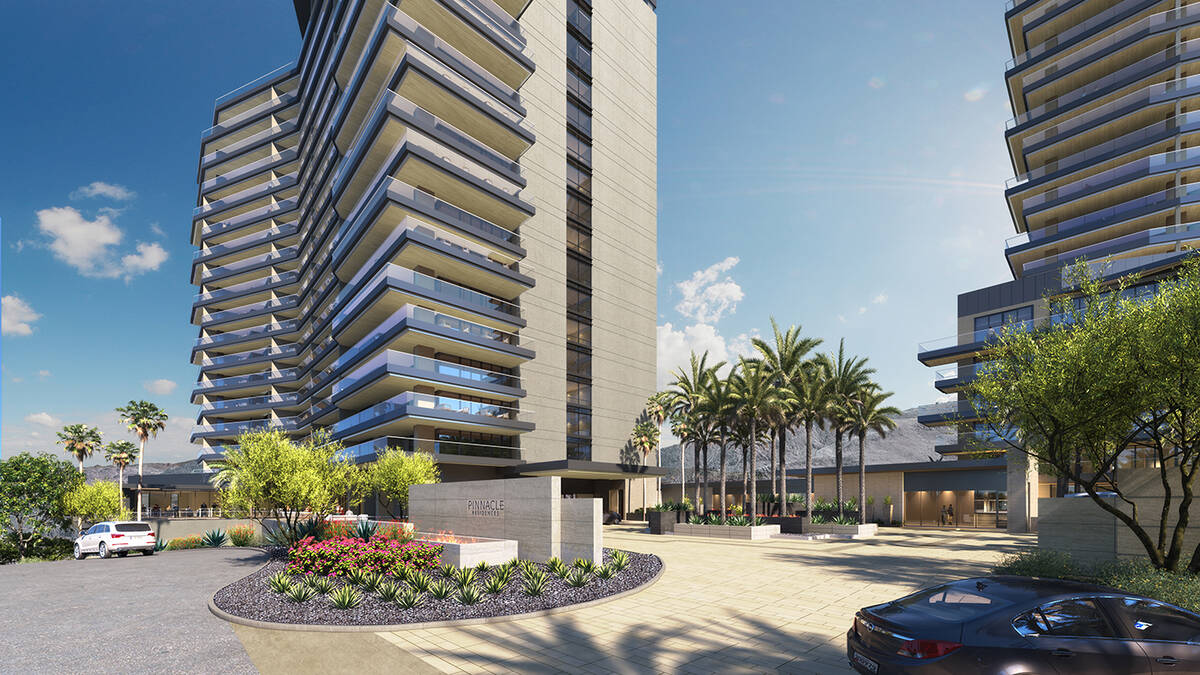 Construction on Pinnacle Residences at MacDonald Highlands will start in June. It will be the first high-rise project to be built in the Las Vegas Valley since the Great Recession. (Azure Resorts) 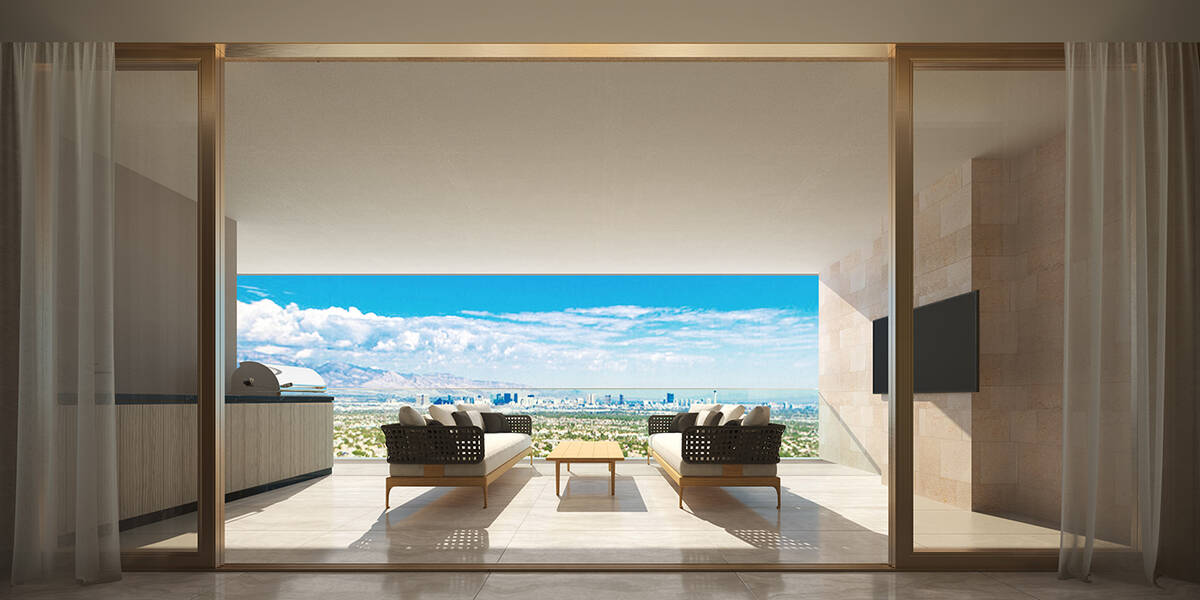 Pinnacle Residences at MacDonald Highlands is a development of Las Vegas- and Mexico-based Azure Resorts and Canada- and New York-based Luxus Development. At completion it will have 171 high-rise condos in two towers. (Azure Resorts) 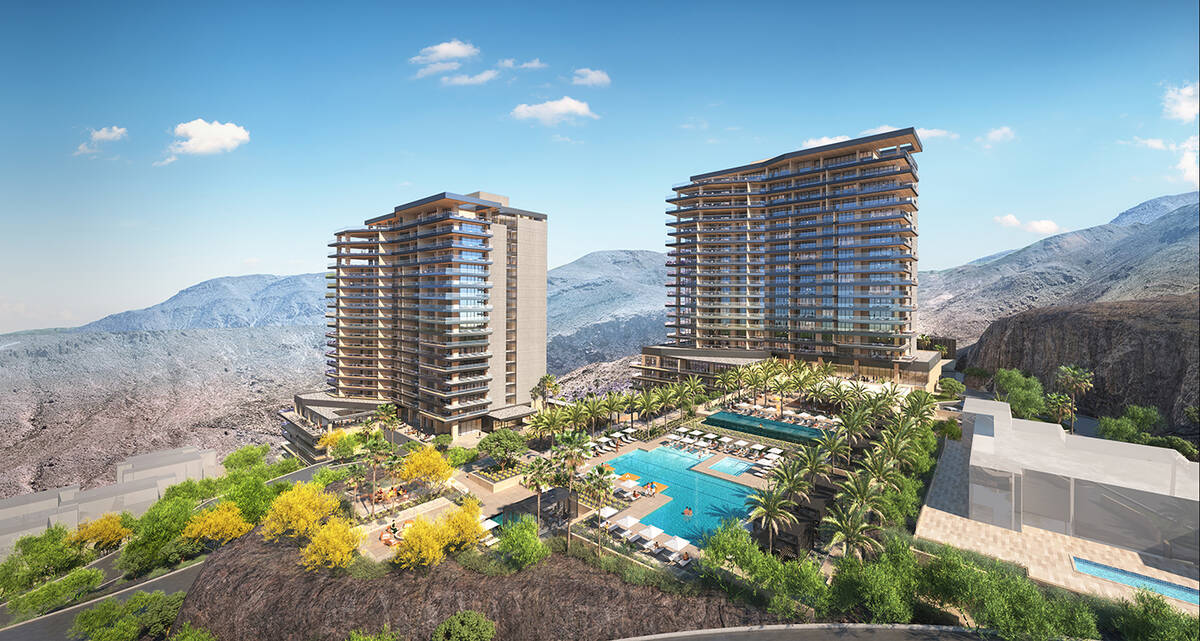 At completion the Pinnacle Residences at MacDonald Highlands will include 171 high-rise condos in two towers. The 11-acre development also will offer 10 single-family luxury homes. The first tower will take 27 months from when construction begins with an opening in the second quarter of 2025. (Azure Resorts) 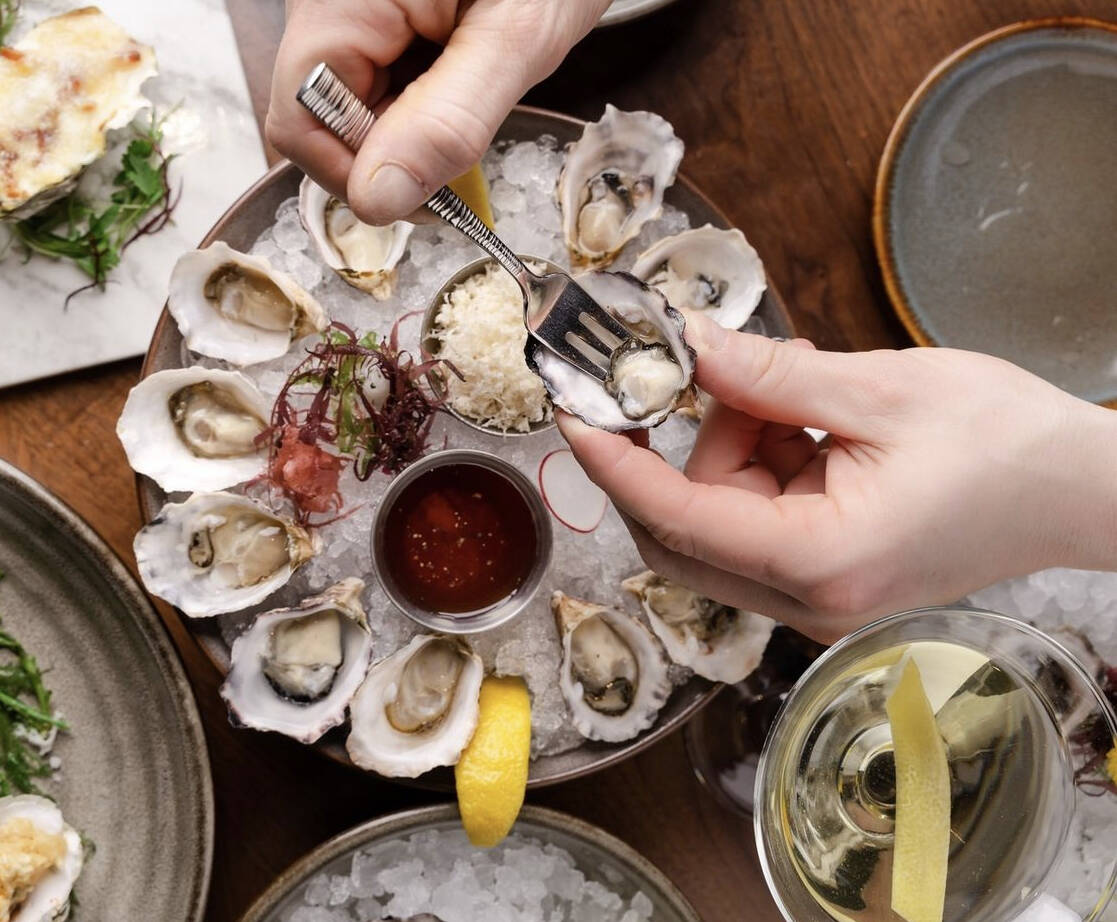 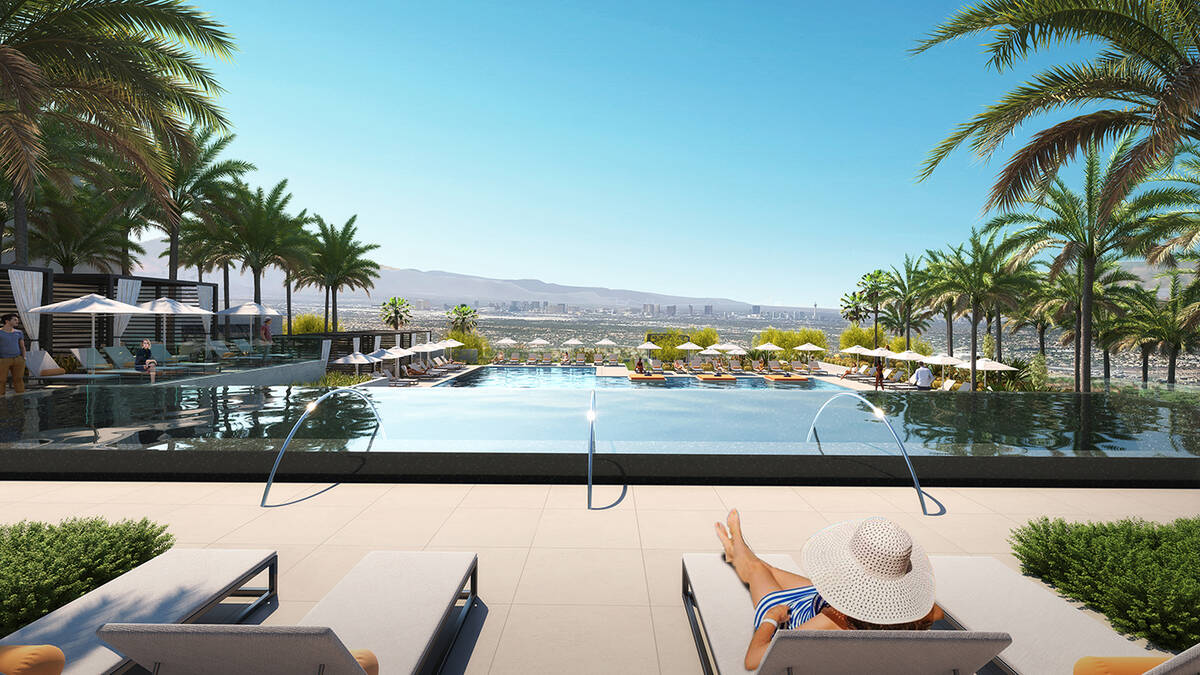 A $900 million luxury resort-style condominium project within the private guard-gated MacDonald Highlands is on track to begin site work in early June after the Henderson City Council gave its approval.

The City Council on May 3 approved a development agreement, zoning changes, tentative map and a design review amendment for the Pinnacle Residences at MacDonald Highlands — the first high-rise that will be built in the valley since the Great Recession.

The project, a development of Las Vegas- and Mexico-based Azure Resorts and Canada- and New York-based Luxus Development, will have 171 high-rise condos in two towers. It also will have 10 single-family luxury homes as part of its 11-acre development that was first announced to Real Estate Millions in November. There also will be two model homes that will be built two blocks away with construction on those starting in 90 days and expected to be completed in 14 months.

Azure President and founder Jim Reilly, a Henderson resident in Seven Hills, said he is thrilled about how the interest in the project has grown over the last few months. This will be Azure’s first project in the continental United States after developing resort residential villas in Mexico and Hawaii.

“We have more than 200 reservations,” Reilly said. “The community has shown tremendous support with this product in this location. It will put the community on more of a global stage.”

Kristen Routh-Silberman, a partner with Corcoran Global Living and the exclusive listing agent for the Pinnacle Residences, said she’s pleased with the interest in the project.

“We’ve had a great response without doing any advertising,” Routh-Silberman said. “This is going to be a one-of-a-kind project.”

The blasting and other site work will begin in June and take five or six months. Construction will start with foundation work in December or January. The first tower will take 27 months from when construction begins with an opening in the second quarter of 2025, Reilly said. The second tower will take another 45 to 60 days to complete.

Reilly said he has seen cost escalations between 7 percent and 15 percent since the project was announced in November and that will impact the prices charged for each unit. The market also swung higher with price escalation, he added.

Prospective buyers, who have already put down between $10,000 and $100,000 for their reservation, will have a chance to secure their units in late September or early October by putting down 20 percent to 25 percent, Reilly said. The unveiling comes as the stock market has lost a lot of value in recent weeks with the Federal Reserve raising interest rates.

“The market has some really wild swings in them right now and luckily the demographic we have is a little bit different than the one for first-time homebuyers,” Reilly said.

“We’re confident that this is a product people want. A lot of our buyers are going to be moving laterally from other homes. As long as pricing remains consistent, then we think the timing will be good. There isn’t much inventory in the luxury space, and there’s not another product that will be competitive to this for the foreseeable future in the city of Henderson. The timing will be right for us. I would have loved to have sped it up a year or two, but it is what it is at this point.”

About 75 percent of the buyers are Las Vegas residents, who will be moving out of single-family homes, and about 10 percent are current owners in MacDonald Highlands and buying as an investment or with a plan to move. The other 25 percent are relocating from high-tax states.

“We haven’t done any marketing out of state yet, so almost everything is through word-of-mouth and the local broker community,” Reilly said.

A lot of buyers are empty-nesters or soon will be, and outlived the need for a 10,000-square-foot house with a pool and yard, Reilly said. People are able to work remotely and live in a place where they don’t have to worry about packages or mail or maintenance.

“They want the flexibility to go to their second or third home for two to three weeks at a time and not have to deal with their primary residence and headaches of maintenance and daily deliveries,” Reilly said. “Our sweet spot is your 45- to 65-year-old. I think we will have more younger buyers once we start marketing into California and other markets. It does provide an easy and flexible lifestyle for those who want to keep traveling and working remotely.

“I was talking to a guy who lives on the Strip and he wanted more of a sense of community, and that’s what we will end up providing here — a sense of community in the suburbs but still having great access to the Las Vegas Strip and all the amenities it provides. You will know your neighbors and have things in common with them and have lunches and dinners and events.”

Reilly said he anticipates 40 percent to 50 percent of the reservations will fall out once specific pricing is provided for units and homeowners association costs. Prices are expected to start “at the $2 million range and go up in excess of $20 million.”

One tower will be 24 stories while the other is 25 stories. There will be underground parking of four to five stories. There are 18 junior penthouses that either have a built-in spa or pool. The four penthouses will have both a pool and spa.

Other units will range from 2,250 to 4,200 square feet with two to four bedrooms. The exteriors will be 550 to 1,200 square feet. There are four ground-floor units tucked in front of the garage that have private plunge pools where you can walk out to them from your terrace.

“You have 270-degree views of the entire Las Vegas Valley,” Reilly said. “All of the units are focused on the midcenter of the Strip and you’ll have views from downtown to Allegiant Stadium and well beyond.”

The project will have four hotel guest suites that condo owners can use when they have friends and family visit. They only pay a cleaning fee.

The 10 homes, which will be the final stage of construction and delivered three to four months after the towers are done, will be situated in front and below the condo towers and have the same architectural style and interior design.

No reservations are being taken at this time for those homes, which will range between 4,500 square feet and 12,000 square feet. Those homes will be single-story, two-story and some with basements. Price points are expected to be between $8 million and $20 million.

“We had some excess land, and we want to allow some select buyers the opportunity to still maintain a single-family home but have it be in a fully served environment,” Reilly said. “They will have access to all of the amenities, management, food delivery service, package delivery and benefits of every condominium owner.”

An announcement is pending this summer on branding and management of the condo towers, but Reilly said it will be a recognizable name to operate the property.

“We’re currently considering the world’s leading luxury hospitality brand,” Reilly said. “This is a one-of-a-kind project so we’re trying to figure out how to provide the most value to our buyers. No. 1 is branding the project and continuing to elevate what we’re offering and since we’re going to sell through 171 of those, we wanted to figure out how to maximize the value for these buyers and create a higher upside for them when they decide they are ready to resell it. Having a worldwide known brand is something that can not only elevate the project but the community and city of Henderson and city of Las Vegas. It also provides certainty for the buyers and helps them understand what they will be getting instead of counting on the developer to deliver it.”

Pinnacle has unveiled plans for Noble Heights, an original high-end culinary concept in partnership with local hospitality veterans and wife-husband business partners Elizabeth Blau and Chef Kim Canteenwalla. Noble Heights will feature ranch, farm and sea-centric cuisine and will not only be open to all residents of MacDonald Highlands but the entire valley. There will even be catering for the condos and residences.

Blau is known for creating the opening restaurant portfolios at Wynn and Bellagio and for transforming the food and beverage philosophy in the city. Canteenwalla has led restaurants and resorts around the world and is the former executive chef for MGM Grand in Las Vegas. Blau and Canteenwalla own Honey Salt in the west valley and Buddy V’s Ristorante at The Venetian.

Blau said she was introduced to the Pinnacle project by Routh-Silberman.

“On any given night when I am in the restaurant (in the west valley), people ask me when we’re going to open on the other side of town,” Blau said. “It was always something in our sights. When we saw Jim’s plan for Pinnacle, it was a no-brainer. We were floored by the design and struck by the extraordinary views, hence the name Noble Heights. We wanted to create something that was a modern steakhouse. We are inspired by the ranches in Northern Nevada and neighboring states and farms and certainly the sea. We want to feel refined and timeless but also have a regional feel to it and extension of the Las Vegas Valley.”

The restaurant will have steaks, pork chop and lamb chops from a wood-fired grill. She said “we will have fun with the seafood.”

The restaurant will be open for dinner seven days a week but also serve weekend brunch, Blau said.

“I think this is going to be something that’s wonderful for the residents but also the community,” Blau said. “With a reservation, we will be open to the Las Vegas community.

This is more upscale than Honey Salt but the menu will have something for everyone.”