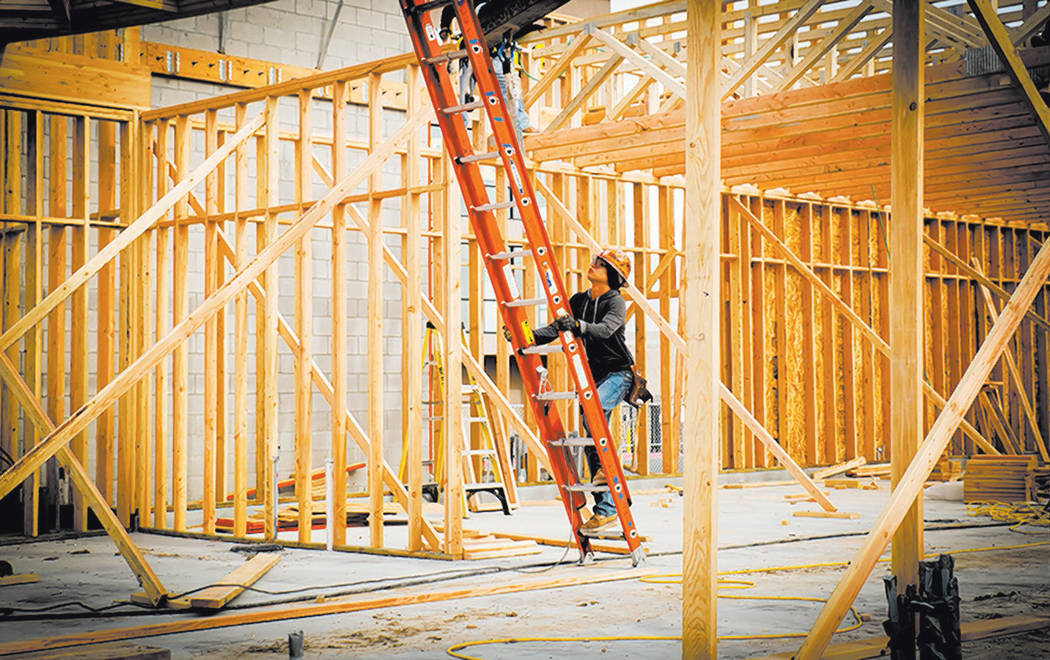 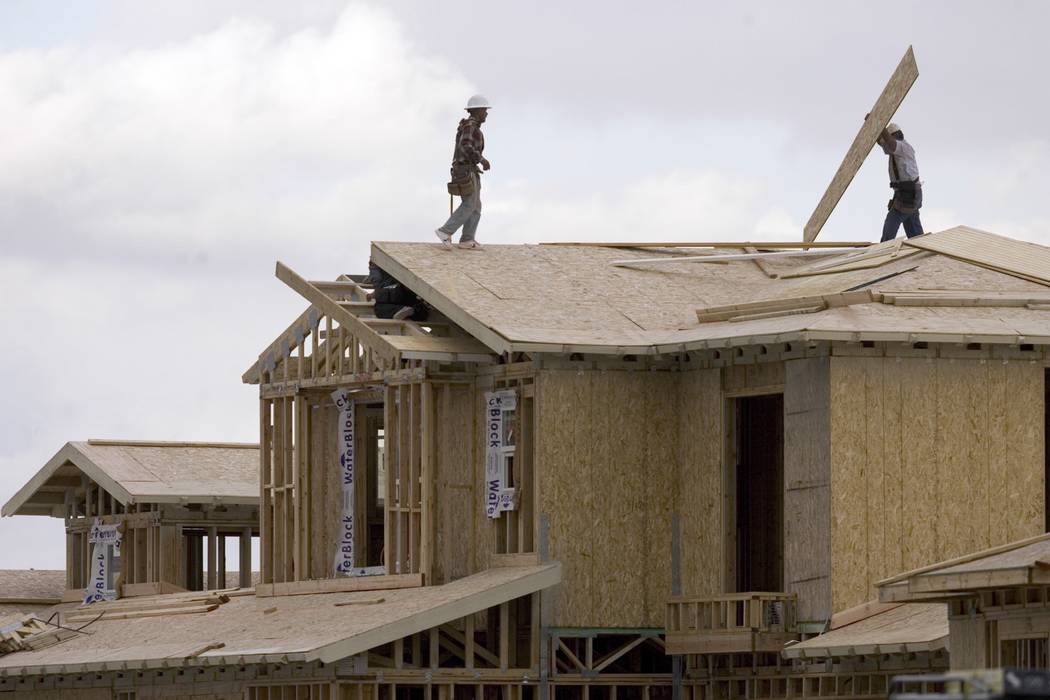 Southern Nevada saw its strongest October new home sales since 2006 during a month prices set a record high, in part because of a surge in million-dollar home closings, and builders expect prices to continue to rise in 2020.

And on the resale front, a UNLV economist this week said at a conference that existing home prices will rise much higher in 2020 and 2021 after saying they’re on pace to increase only 2.6 percent this year. That goes against some national real estate predictions that Las Vegas home prices might decline.

That trend will raise again the issue of affordability in the marketplace. Apartment rents, according to a December report issued by Apartment List, shows Las Vegas rents are up 3.2 percent over the past year, the fifth fastest-growing rate among large cities. Since 2014, rents have grown by 20.6 percent compared with the national average of 11.3 percent.

After being down most of the year in closings of new homes by 1.3 percent through October, Home Builders Research reported, new home net sales — new contracts minus cancellations — in October were 932. That’s 34 percent higher than the 695 in October 2018, and though the numbers aren’t finalized, November appears strong too.

The number is well below the 1,634 closings in October 2006, but the fourth-quarter jump sets the stage for Southern Nevada possibly to surpass 2018 in closings and start 2020 on a strong note.

The $410,414 median price of new single-family home closings in October was spurred in part by 30 high-end homes of $1 million or more — nearly double the amount at the low end of the scale — that can skew the median price, according to Andrew Smith, president of Home Builders Research. That’s a strong month considering there were 123 such closings (20.5 a month) in the first six months of 2019, an increase of 41 percent over the same period in 2018.

Smith said of the 30 homes that closed above $1 million, only four weren’t in a master-planned community. Twenty-two were in Summerlin, which had 101 single-family closings, or 13 percent of the total.

Thirteen of the 17 homes in the valley that closed for less than $250,000 were from Harmony Homes in the Brookfield development and Signature Homes’ Solana Terrace in east Las Vegas.

Smith said the fourth quarter is “getting off to a great start” for homebuilders and shows the consistency that has existed in 2019.

“As we have been expecting, the chance of an increase in net sales by the end of the year seems more and more likely with each passing week,” Smith said. “There are many things contributing to this, not the least of which are mortgage interest rates. Last year at this time we were in the middle of a season of rate increases that peaked in the middle of November at just under 5 percent on average for a 30-year fixed rate mortgage. While we have again seen a very slight increase since early September of this year, the average 30-year, fixed-rate mortgage is just 3.68 percent.”

Home Builders Research reported 10,673 closings in 2018, and the Southern Nevada Home Builders Association put the number it tracks at 11,050.

As he said earlier this year, the builder group’s CEO, Nat Hodgson, said he still expects the 11,000 number to be surpassed by a small amount and fall somewhere between 11,500 and 11,800 next year.

“We came out of the gate in 2019 almost normal, but people freaked out because we were so much down than the first few months of 2018. That was an anomaly,” Hodgson said. “We’re steady and sustainable. I know everybody wants more, but we’re in a good spot. We’re going to be hovering around the 11,000 mark for a few years. Are there things I’m concerned about? Sure.”

Hodgson admits he is concerned about rising home prices, and he expects that to continue into 2020 as builders keep looking at town home construction to make housing more affordable.

There have been 1,241 town home closings through October, an increase of 11 percent over 2018. The overall share of town home construction is 14.3 percent for the year — a number Smith said is lower than expected — but higher than the 12.4 percent in 2018.

Hodgson said he expects that percentage to jump to 16 percent to 17 percent, but not all of it will be inexpensive for those builders going after lifestyle buyers. Don’t expect single-family home prices to go down, he said.

“Every new project costs more money, we’re paying more for labor, and material prices have gone up,” Hodgson said. “There’s no way without making the product smaller or stripping them down to go the other way. That’s why people ask me when’s a good time to buy. I say ‘now’ because the only way it’s going to get cheaper is you’re not getting the same product or something has gone wrong. Unlike 2007, it’s the cost that’s increasing the sales price and not the margins. It’s because of supply and demand. The replacement of today’s product is at a premium, and I don’t see that stopping in the near future.”

Hodgson said he doesn’t want to describe price increases with the word “worry” but added he is concerned and looking at innovative ways to “cushion that increase.” It’s not going to jump 20 percent, but Hodgson said he has his eye on prices.

“I lobby local governments to let them know how this new proposal or that proposal they’re considering on how it increases prices,” Hodgson said.

Hodgson said Las Vegas has required sprinklers in home, and that adds to the cost. Clark County increased fees for public facilities to build in the southwest valley. Permit fees there hadn’t been raised in years and went into effect in July and will increase again in January for a total of 41 percent, he said.

“We’re still at a workshop because it’s still not enough,” Hodgson. “We will have to come up with a magic number. It’s going to keep adding to the cost.”

KB Home and Lennar pulled more than 100 permits each and combined for over 32 percent of all permit activity for the month, slightly above their overall 2019 market share of 28 percent to this point, Smith said.

Master-planned communities are dominating the permit total with 59 percent in October, and the share for 2019 is 52 percent.

KB Home (147) and Lennar (146) led in closings in October, Smith said. They were the only two builders to record more than 100 closings with the No. 3 performer, Richmond American, falling just short with 99.

Smith said that by combining the totals from a consolidated Pulte Homes (62), Del Webb (21) and American West Homes (18), they would break that threshold with 101.

Ten new communities opened in October with Edgewood by Lennar in the east valley reporting 13 net sales through Nov. 24, Smith said. It has an average base price of $291,657.

On the other end of the price spectrum, Smith said Toll Brothers opened Lusitano Ranch in the northwest valley. The project has 36 half-acre lots with four available plans with an average base asking price of $746,995, he said. They haven’t reported any sales, but traffic numbers have been strong, averaging 22 per week, Smith said.

DR Horton was the most active in buying more than 12 acres in three different transactions. American Homes 4 Rent, Beazer Homes, Century Communities, KB Home, Lennar, LGI Homes, Paragon Life Builders and Pulte Homes were among the others adding to their portfolios, Smith said.

Stephen Miller, a UNLV economist, released a report this week that predicts existing home prices — tracking single-family homes over time — will rise much higher than the 2.6 percent he expects by the time 2019 ends but not reach the double digits of surpassing 11 percent in 2017 and 2018.

“The population is growing at 2.1 percent, and I think the demand for housing is there,” Miller said. “It’s a supply and demand issue. Mortgages rates have come down, and that will help the demand as well.”

That prediction contrasts to listing site Realtor.com’s report this week that said median sales prices in Las Vegas will fall 1.1 percent in Southern Nevada in 2020. That contrasts with a national gain of 0.8 percent.

The same report said existing home sales will fall by 9.5 percent, which would be the third-biggest decline in the nation.

Single-family resales in the Las Vegas Valley are down 8 percent in 2019 through October, and town home and condo sales are up 7 percent, according to Home Builders Research. The Greater Las Vegas Association of Realtors is expecting sales numbers and prices in 2020 to be comparable to 2019.

“The overall trends in our housing market have basically been the same all year,” said 2019 GLVAR President Janet Carpenter, a longtime local Realtor. “Home prices have been rising gradually compared to last year and the past several years. Sales have been running slightly behind last year’s pace. Homes are staying on the market a little longer. And our local housing supply is still very tight and only about half of what we’d like it to be.”

As for 2020, Carpenter expects to see more of the same, citing Southern Nevada’s strong job, population and economic growth. She said the factors will continue to drive demand for housing, and reports from the National Association of Realtors and others suggesting modest increases in home prices next year. She expressed skepticism about a report released this week by Realtor.com that predicted existing home prices in Southern Nevada could fall by about 1 percent in 2020.

Miller said he expects a surge in home permits in 2020 with much of that driven by the demand for apartments giving the population growth and affordability of housing.

The median rent for a two-bedroom apartment in Las Vegas is $1,190.