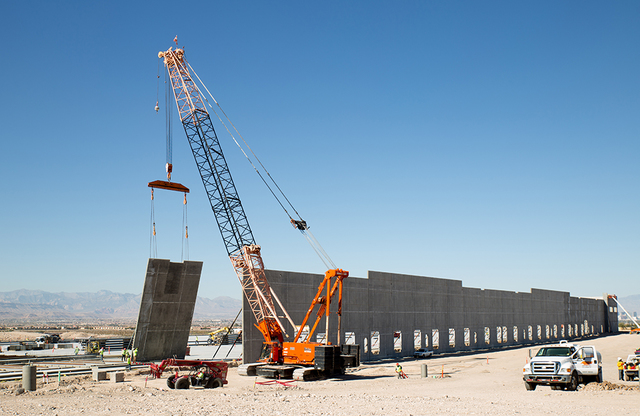 A new speculative industrial project is starting to take shape near the Henderson Executive Airport in Henderson.

The footprint on the other four buildings will be about 600,000 square feet of new speculative industrial space. When the first building is 50 percent leased, construction will begin on the planned buildings at the 28-acre site, Doherty said.

Historically, the land is part of the city of Henderson’s plan to bring development in the region. Once owned by the Bureau of Land Management, a patch of roughly 153 acres was earmarked by the city some five years back for industrial development.

Within a couple years, former homebuilder Terry Manley and Mike Dean, founder of M.J. Dean Construction, set up a deal to purchase the available lots for $13.6 million and parcel them off. In total, the team, running under the South 15 Partners LLC label, foresaw plans of about 2 million square feet of industrial space.

Pannatoni made its move on the complex in September 2015 when it purchased 28 acres for $5.6 million. The region already had seen some growth. in 2013, FedEx built a ground facility totaling more than 300,000 square feet.

Doherty said the region offers a lot of value to its potential users.

One item of value is the project’s proximity to Interstate 15 and the southern end of the valley, Doherty said during a tour of the project. Doherty, along with others from Panattoni and Alston Construction, gave an exclusive tour to class members in NAIOP Southern Nevada’s Developing Leaders Institute in November.

“Some of the ideas behind this whole project, including building a building this big, is 70 percent of all the trucks enter the Las Vegas Valley from the south,” Doherty said.

Many of these trucks end up on the other side of the valley in North Las Vegas, where most of the bigger industrial buildings are, he added.

After truck drivers drop their load, they have to drive back down through the entire city again.

Even more of an incentive is pricing, said Matt Clafton, vice president of construction at Alston Construction, Panattoni’s general contractor on the project.

He went onto say that the lease prices in North Las Vegas are around the 40-cents-per-square-foot range for industrial space, though those rates could become a thing of the past as the average lease rates have been on the rise.

Citywide, asking lease rates have increased from about 55 cents per square foot in the fourth quarter of 2014 to just under 65 cents in the third quarter, according to a third-quarter report on the industrial market from Colliers International Las Vegas.

Doherty said the lease rates at Panattoni’s project sit in the mid- to high-40-cent range, which is slightly over North Las Vegas prices. But projects in the southwest have asking lease rates of about 65 cents per square foot, he said.

Also, in that same time period, vacancy rates in the valley fell from just over 8 percent to 5.2 percent in the third quarter, according to the report.

But Panattoni still is waiting to get its first signed lease on the building. The structure is divisible down to around a little more than 109,000 square feet, according to literature on the project, and features a 36-foot clear height.

Doherty said the project is a new market for the city, which has its challenges on leasing.

“The problem is it’s a paradigm shift to get these convention companies, these hotel supply companies, to come out of the gridlock of that southwest, where they’ve been forever, and get them to move to a property like this that really hasn’t truly been established yet,” Doherty said.

But other projects in the region such as FedEx prove the region is on solid footing.

“When they open up a huge ground facility like that, it shows credibility to be able to get trucks in and out in an efficient manner,” Doherty said.