Skip to content
Sign up for our newsletter
section-ads_high_impact_1
BY LYN COLLIER LAS VEGAS BUSINESS PRESS
October 20, 2020 - 10:59 am

This Blue Diamond home at 4 Montana Court is listed for for $5.35 million. It's a modern take on Zen solitude. (The Ivan Sher Group) 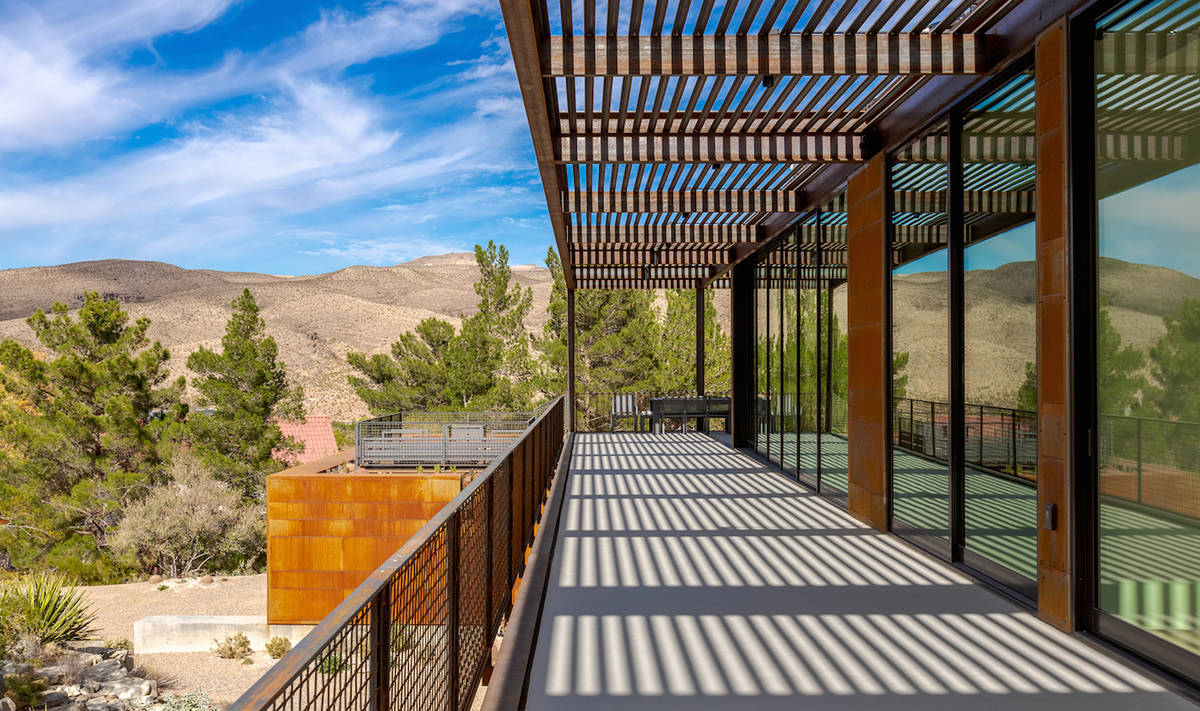 The expansive deck runs along the back of the home, offering views of the Spring Mountains. (The Ivan Sher Group) 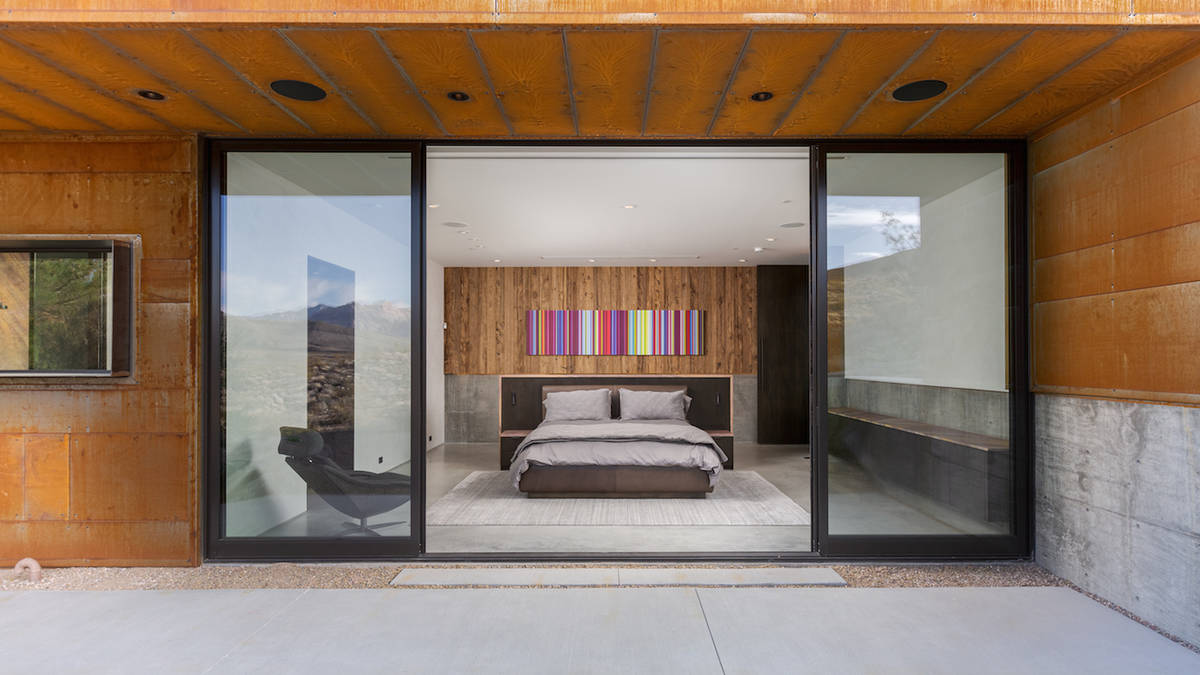 The master bedroom leads to a backyard area that leads to hiking trails, which run throughout the area. (The Ivan Sher Group) 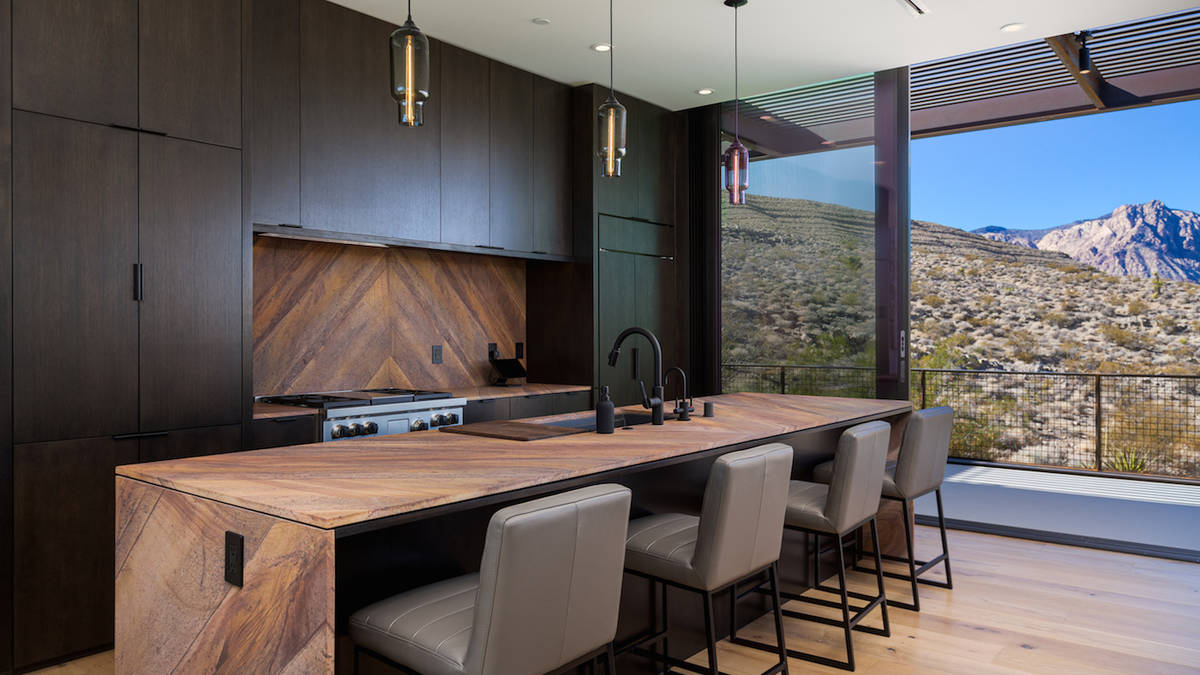 The upstairs kitchen has upgraded Wolf and Sub-Zero appliances and an island with seating. (The Ivan Sher Group)

The home was designed by Punch Architecture. (The Ivan Sher Group)

A seating area on the deck. (The Ivan Sher Group) 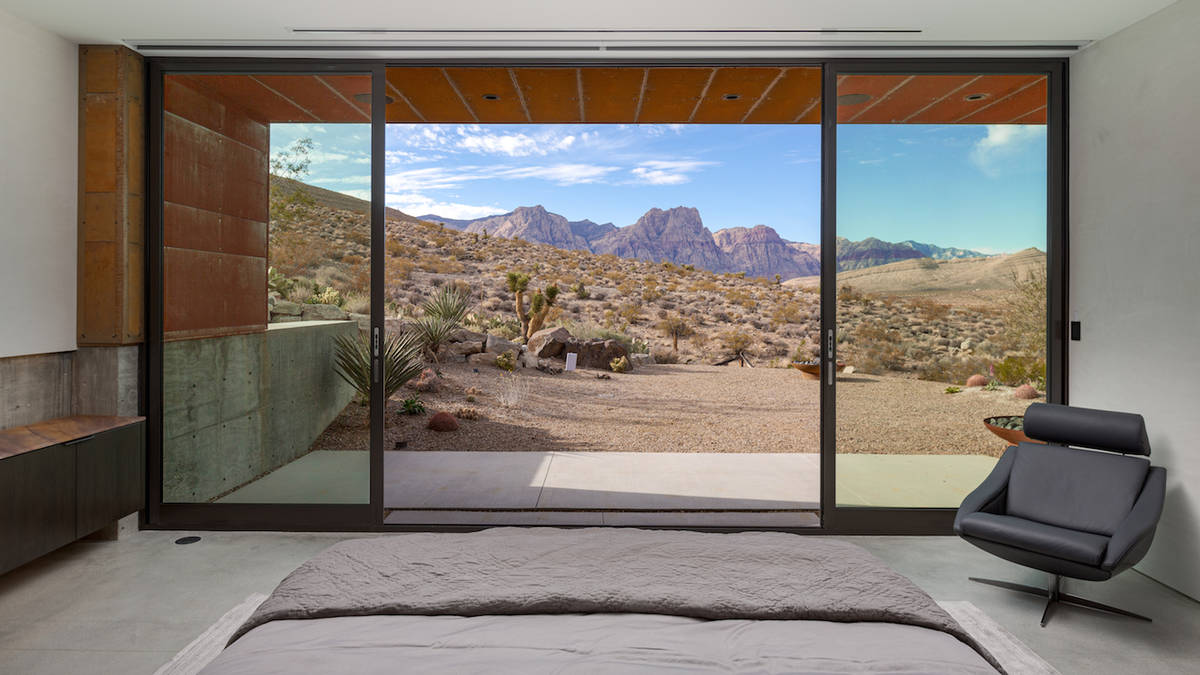 One of three bedrooms. (The Ivan Sher Group) 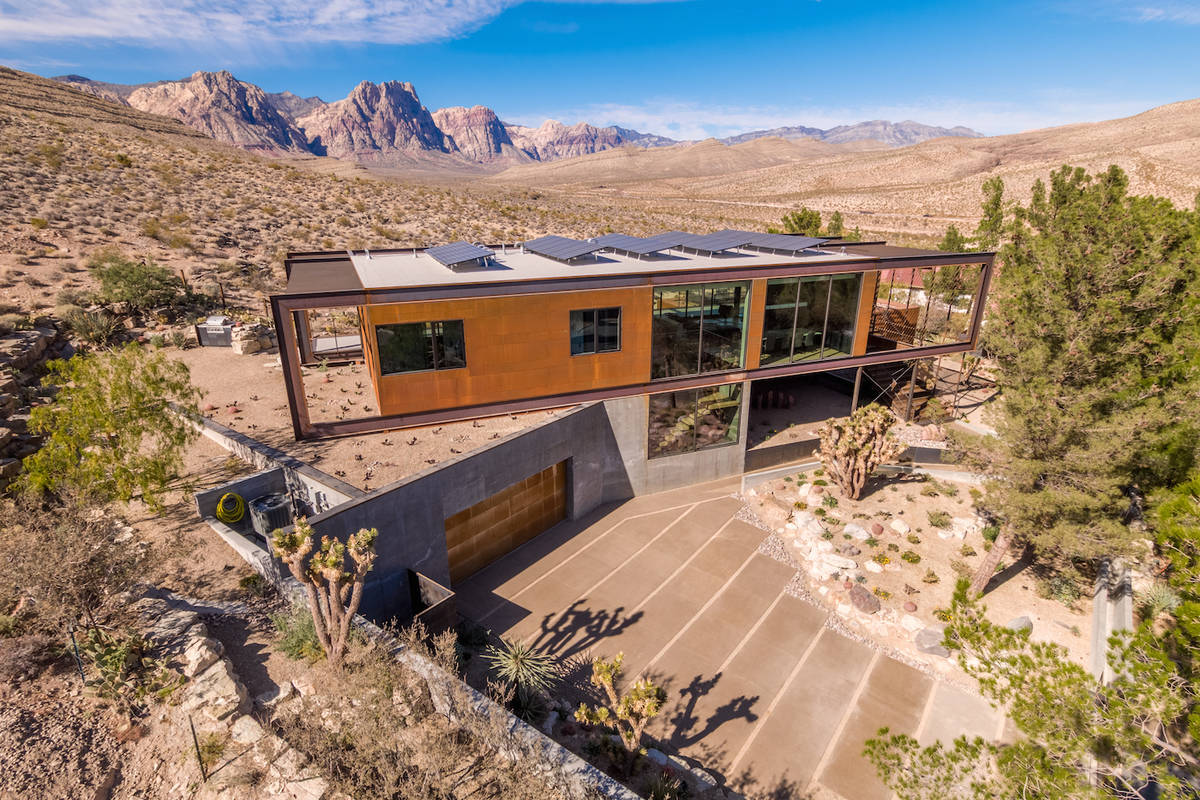 The home has a two-level design. (The Ivan Sher Group) 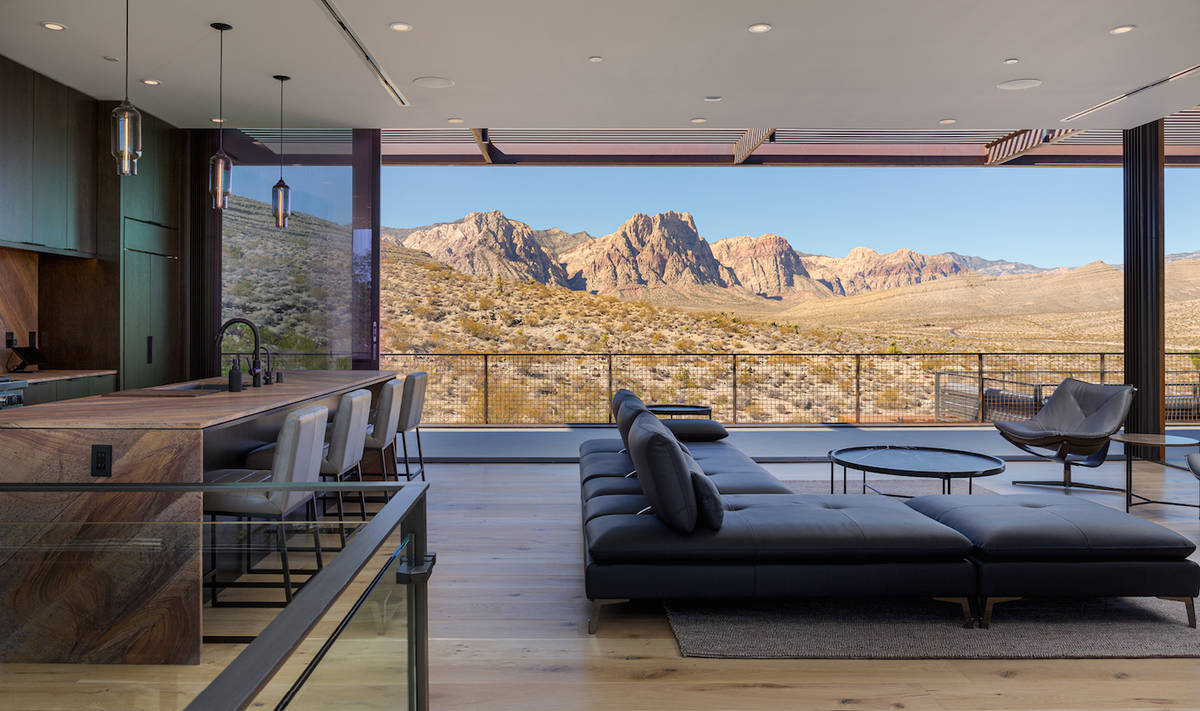 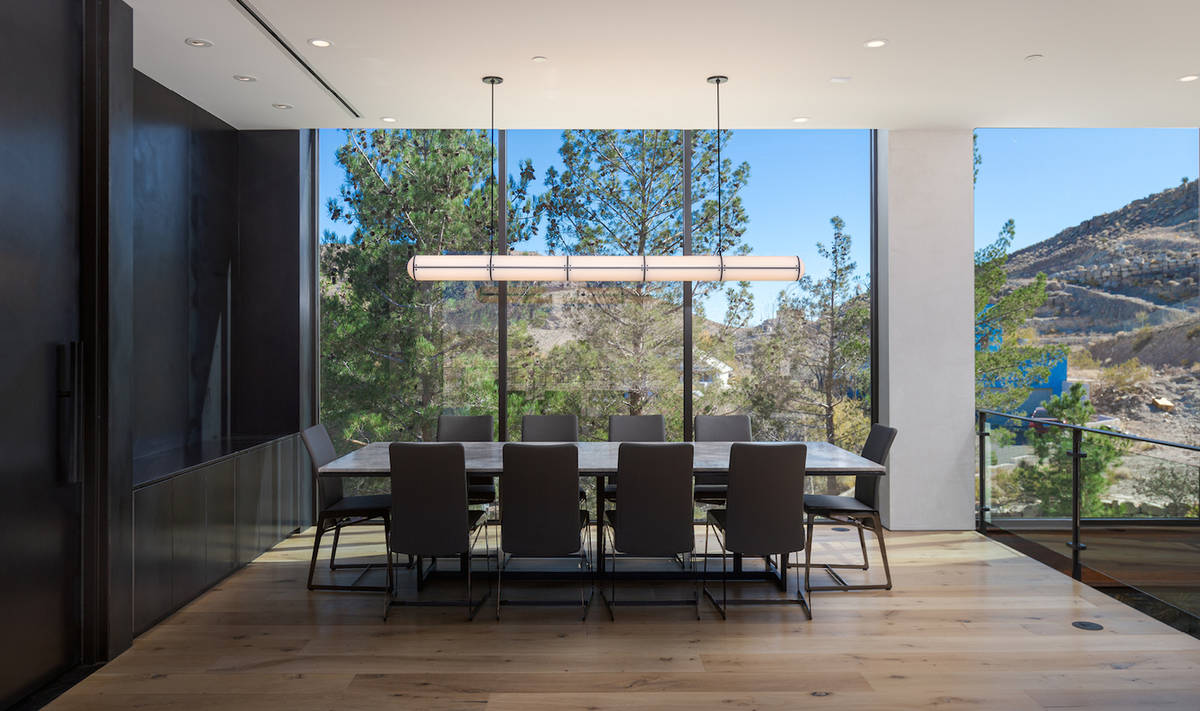 The dining room is on the deck. (The Ivan Sher Group)

The home has two levels. (The Ivan Sher Group) 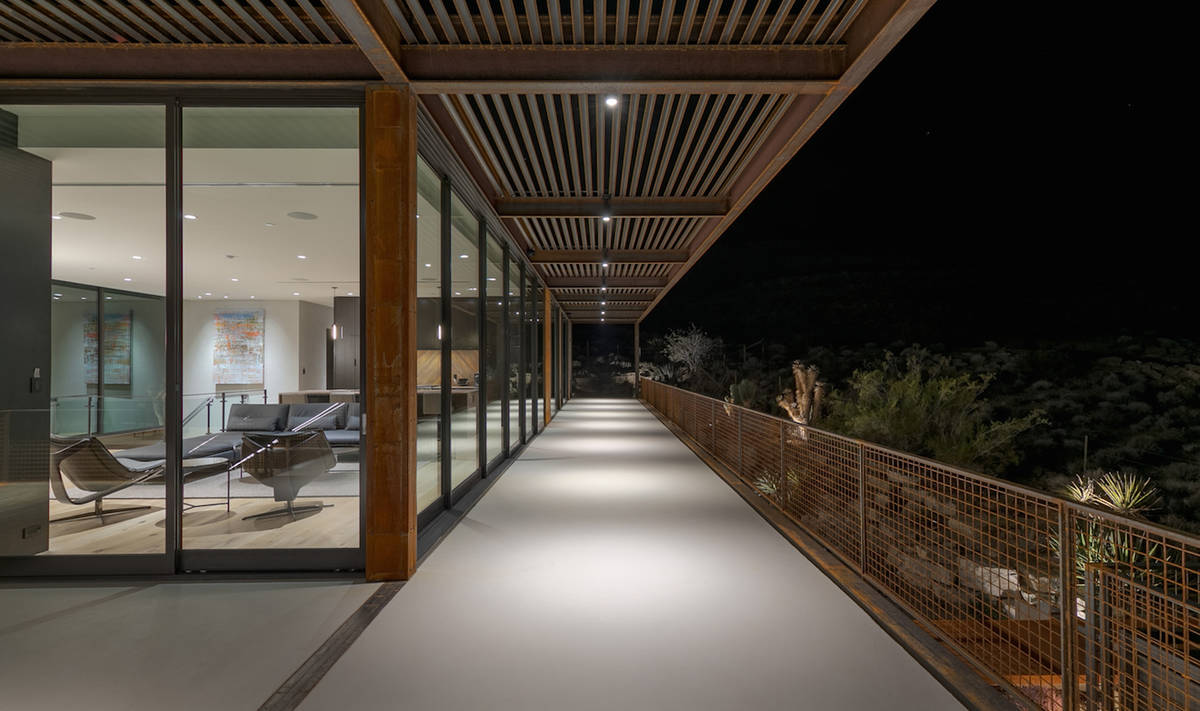 The home has an expansive deck. (The Ivan Sher Group) 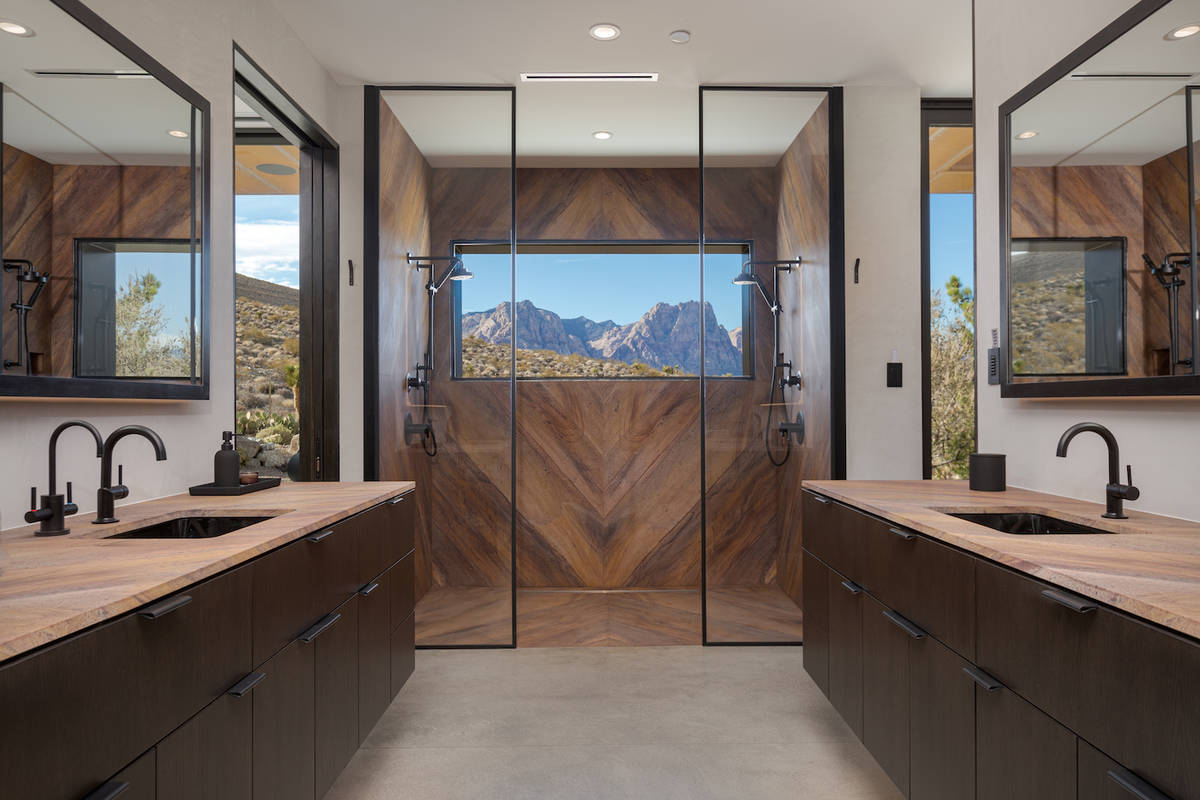 The master bath is in the lower-level master suite. It has high-end, spa-quality finishes. (The Ivan Sher Group) 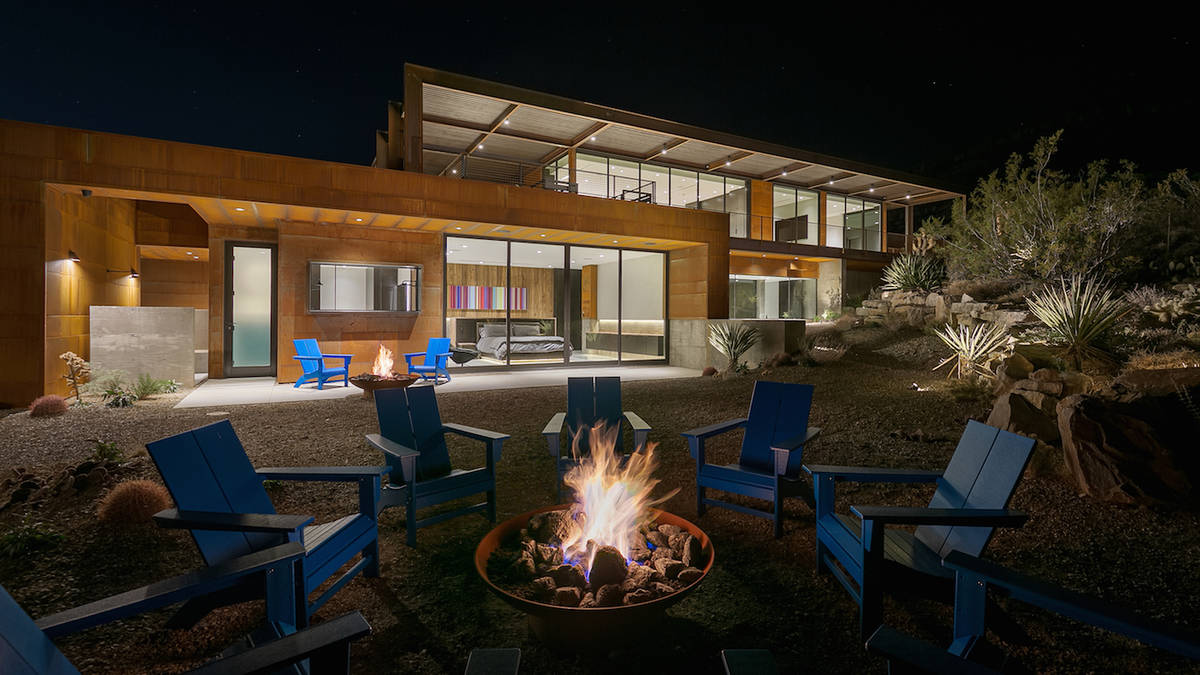 The Blue Diamond home has a fire pit in the backyard at the foot of the Spring Mountains. (The Ivan Sher Group) 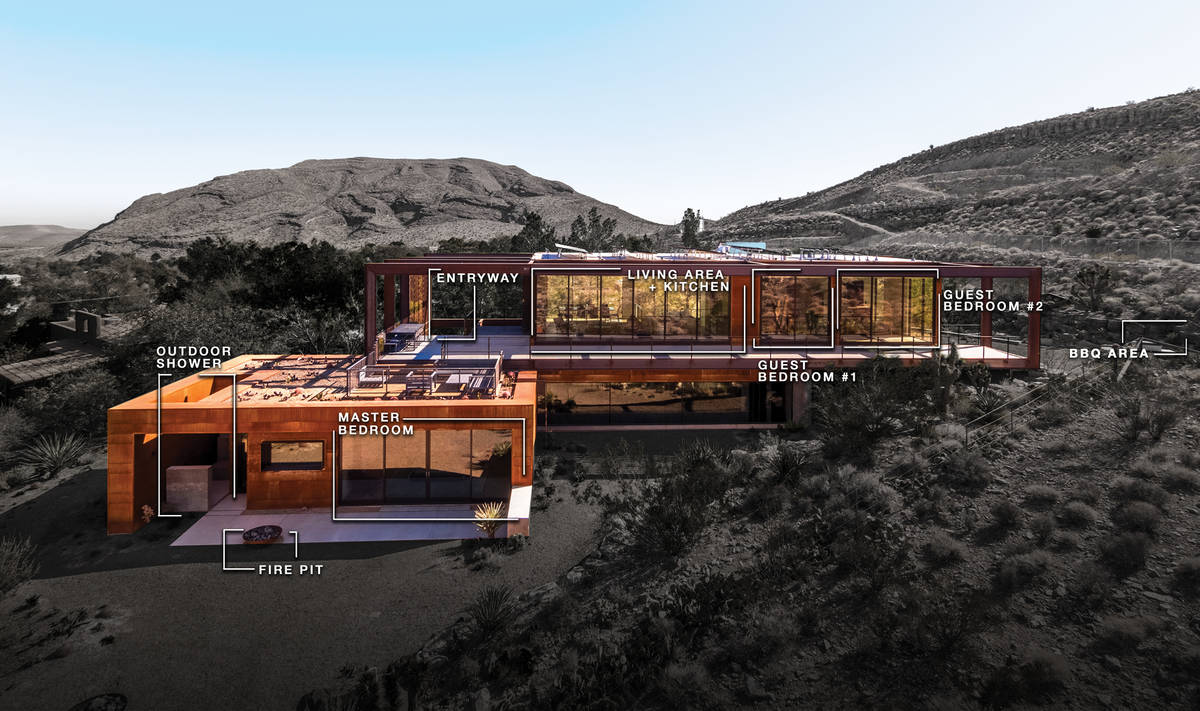 This Blue Diamond home at 4 Montana Court is listed for for $5.35 million. It's a modern take on Zen solitude. (The Ivan Sher Group)

The tiny town of Blue Diamond, which lies about 23 miles southwest of Las Vegas, looks like a sleepy village with one general store and a restaurant. It is likely you will drive by wild burros meandering in the central park when you come to visit. However, for decades it has drawn rock climbers, hikers and adventure seekers of all types. That is because it is nestled at the foothills of the Spring Mountains that circle the Red Rock Canyon National Conservation Area. Blue Diamond started out in the early 1940s as a mining town and now has become the mecca for nature lovers.

Luxury homes above the 1950s-style houses of the town square boast different styles and striking views of the mountains. It’s notable there is no homeowners association for the community, which has about 130 homesites. And, several recreational vehicles were spotted parked on hillside roads.

One remarkable listing is that of 4 Montana Court. The Zen jewel box is snuggled at the foot of the Spring Mountains. Looking out the floor-to-ceiling windows you not only have a view of Red Rock, you are transported there. The desert reds and sandstone whites enter into the second-floor living area next to the kitchen. You can breath in the quiet serenity of the surroundings from the couch or the outdoor deck.

The 3,249-square-foot, modern-style home is a statement of the Las Vegas Valley’s growing sophistication in luxury trends.

The home is understated, yet has all of the smart technology’s bells and whistles — electromagnetic locks and Crestron-controlled lighting, temperatures, sound and window shade control. All of this from an iPad or a smartphone. The home also has upgraded Wi-Fi.

The salute to its natural desert setting starts at the entrance to the home, which is on nearly half an acre. The statement art piece that is in the front yard and showcased from the underground level is a large boulder from the area that has been sliced into sections. It is lit in the nighttime to provide a Zen like visual piece from the subterranean level.

Although the home is made of steel, glass, wood and concrete, it has an organic sensibility to it. “Like a breathing, living element,” said Anthony Spiegel, a Realtor with the Ivan Sher Group, Berkshire Hathaway HomeServices, Nevada Properties. The home is listed for $5.35 million.

Spiegel did not want to disclose the name of the owner. According to public records the home is owned by Chub Nevada Trust and Steinberg David L. Trust, which has the address of a Steinberg Diagnostic Medical Imaging center.

Punch Architecture spent two years creating the weekend retreat for a family who has homes in Las Vegas and other cities, Spiegel said. The home was completed late last year. The firm named it “Minimum Maximum.”

“It’s raw, yet refined,” Spiegel said. “What is so cool about this house is that it has a raw element, but is so deeply refined and sophisticated in its architectural and interior designs and materials that were chosen for both.”

The great respect for its desert mountain setting can be seen in the drought-tolerant landscaping and details of the architecture that provide shade for the home’s glass walls.

The home is well-thought out with the master suite located in the lower level. The bedroom’s design is clever using a desk configuration combined with a wardrobe storage space. It has a view of the mountains and leads to an outdoor retreat.

The upper level houses the kitchen and living areas and two bedrooms. The floors are covered in white oak. It also has access to the large deck that adds more square footage to the home. Outside there is a fire pit with seating area and an outdoor kitchen.

The two-car, oversized garage has lots of storage space and its square footage is not included in the 3,249-square-foot measurement.

Spiegel, who is a Los Angeles native, has been selling Las Vegas real estate since 2005. He said it is rare to have a smaller quality, sophisticated home.

“These owners decided on quality over quantity,” he said.

He added that this could be the trend moving forward as construction costs continue to rise.

“The Vegas market is a very young housing market. It is a relatively young city with a young luxury market. Of the 4,300 homes that are sold annually in the valley, 600 of those are sold for $1 million or more, he said. However, this shallow luxury market has gotten a bit deeper in the last few months and reports show sales have increased 118 percent, he added.

Spiegel said he, like many Las Vegas Realtors, have seen more wealthy buyers from California, New York and Chicago during the COVID-19 pandemic. He said since the crisis, many people living in densely populated urban centers are looking to purchase homes in the suburbs and rural areas, like Blue Diamond.

“I think we have a sort of flight to comfort and space,” he said. “All of us were at home for two or three months. That gave us a lot of time to decide if we liked where we were living or not.”

He said he is seeing buyers that are the wealthiest of the wealthy wanting to make a move out of California because of its “challenging climate.” The state’s higher taxes, wildfires, pandemic restrictions and recent protests have been in the news lately.

“They (wealthy buyers) were always enamored of Las Vegas because of the tax savings, but it was always a dream,” he said. “But now, they are more seriously considering it.”

In addition to California’s woes, he said the decentralization of the workplace where more people are working from home is also a driving force for people to make the move.

“The CEO has found out he can hold his meetings from his computer in any home,” Spiegel said.

“When these jobs are less centralized the local housing market will become less reliant on the local economy.”