Skip to content
Sign up for our newsletter
section-ads_high_impact_1
By Stephanie Annis Special to the Las Vegas Business Press
May 16, 2016 - 1:32 pm 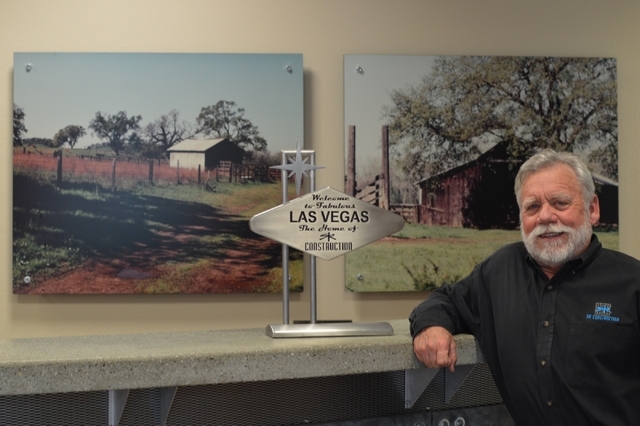 Scott Loughridge, owner of SR Construction, has found a niche in health care construction but also does award-winning work like improvements to the Hakkasan corporate office. Stephanie Annis, special to the Las Vegas Business Press

Scott Loughridge is the owner of SR Construction and Scott’s Ranch, an on-again/off-again family cattle ranch near Sacramento, California.

He went on to the University of Colorado, Boulder where he received his bachelor’s degree in architecture. Loughridge had over 17 years of experience in the industry when he began SR Construction. Scott is his grandmother’s maiden name and the company name honors the 111-year-old family ranch.

Loughridge, together with his wife, started SR Construction as a small business. They worked out of their home while the business grew. Scott’s wife Alice assisted with bookkeeping and paperwork. As SR Construction gradually grew and previous clients began to seek out Loughridge, he moved from his home office to a small 800-square-foot office. Then, in 1998, SR Construction moved to its current location at 3579 Red Rock St.

The compaany is getting ready to celebrate its 25th anniversary.

Q. How did your wealth of experience enable you to be one of the few construction companies to survive the recession?

A. We’ve always prided ourselves on our client base, taking care of our clients and repeat work from those clients. … We don’t do any public work. Our business model’s based on serving the private sector. Our goal is if we take good care of our clients, they’re going to come back to us when they have construction needs.

It was very difficult when the recession hit; it lasted much longer than anybody thought it would. We were fortunate that when we got into health care, those clients are very loyal. They don’t want people working in their hospitals that don’t know how to work in hospitals. Although their capital improvement projects were curtailed … we were able to do some work for them.

What little work that our clients had, they kept us busy. We cut back just like everybody else did. We went from 65 employees down to 17. We worked our way back up to 42.

Q. Do you feel the industry is recovering from the recession?

A. Yes. The issue with us in our business is that we rely on people that have confidence that, whatever business they’re in, it is either going to grow or at least stay the same. For us to do business, they have to spend a lot of money. Now, whether it’s a dentist that’s on a tenant improvement and he’s taking $250,000 out of his saving account or a major corporation that’s spending $25 million, it’s still a significant expenditure from their standpoint. They’ve got to have confidence that if they expend that money — renovate, remodel or build — that they’re going to get a return on that. Yes, the economy is doing better. The issue’s uncertainty; whether it’s because of the election or the world economy. In the back of my mind, my concern is the uncertainty eight to 12 months from now. Are people still going to be confident going forward to make capital expenditures?

Q. How did you come to be involved in the Henderson Hospital project and how is it unique to SR Construction?

A. We started working for UHS (Universal Health Services) down at Valley Hospital in ’95 so we’ve been one of their contractors here locally for 20 years. We’ve done work in other hospitals. We did a six-story addition up at Summerlin Medical Center about six years ago.

So when they decided to build a new hospital, we were asked to submit a proposal and interview for one of the positions on that team. We did that and were selected to be part of that team that’s building that project.

Q. What’s the next big project on the horizon for SR Construction?

A. What we’re seeing is nothing that big, but we are seeing people coming to town that want to build skilled nursing facilities. That’s become a market that we’ve gone after. That’s similar to hospital occupancies; so it’s a health care market that we’re comfortable participating in and can help owners here locally get through the regulatory approval with state health and the county, city, etc.

We’re doing a number of those and then there’s also a group that’s come into town with a new product called the micro hospital. We’re doing the first one of those for them now. We’re waiting to hear if we were successful on the next two; then they have a fourth one after that.

On the first three, Dignity Health is the branded hospital for this facility. There is an option on this first one we’re doing; they’re looking at putting an ambulatory surgical center on the second floor. That decision hasn’t been made yet … but that’s a potential.

Q. What sets you apart from your competitors?

A. We strive to tell clients, potential clients, that I’m an architect that became a contractor. I’ve got two young architects that work for us. One of our senior project managers has an architectural background. So when we talk about doing design-build, design-assist projects, which is the bulk of our work, we actually live and breathe the design process in our company.

We don’t just say we can do design-builds and really only build what somebody designs. We actively participate in coming up with the best, most beautiful design, for that client. But we realize it has to be contained within a budget that the client can afford. So that’s where I think we have ability that may be different than other contractors is because we have that design element and that passion for design in the company every day.

My first job out of school in 1974 was a design-build project. I’ve been doing design-build for 42 years. So, I’ve got a long history and a real passion for that delivery system in our industry. So much so that I’m a founding member of the National Association of Church design builders and I’ve been on the board of the Western Pacific Region of Design-Build Institute of America for 15 years. We’re just starting a local chapter here.