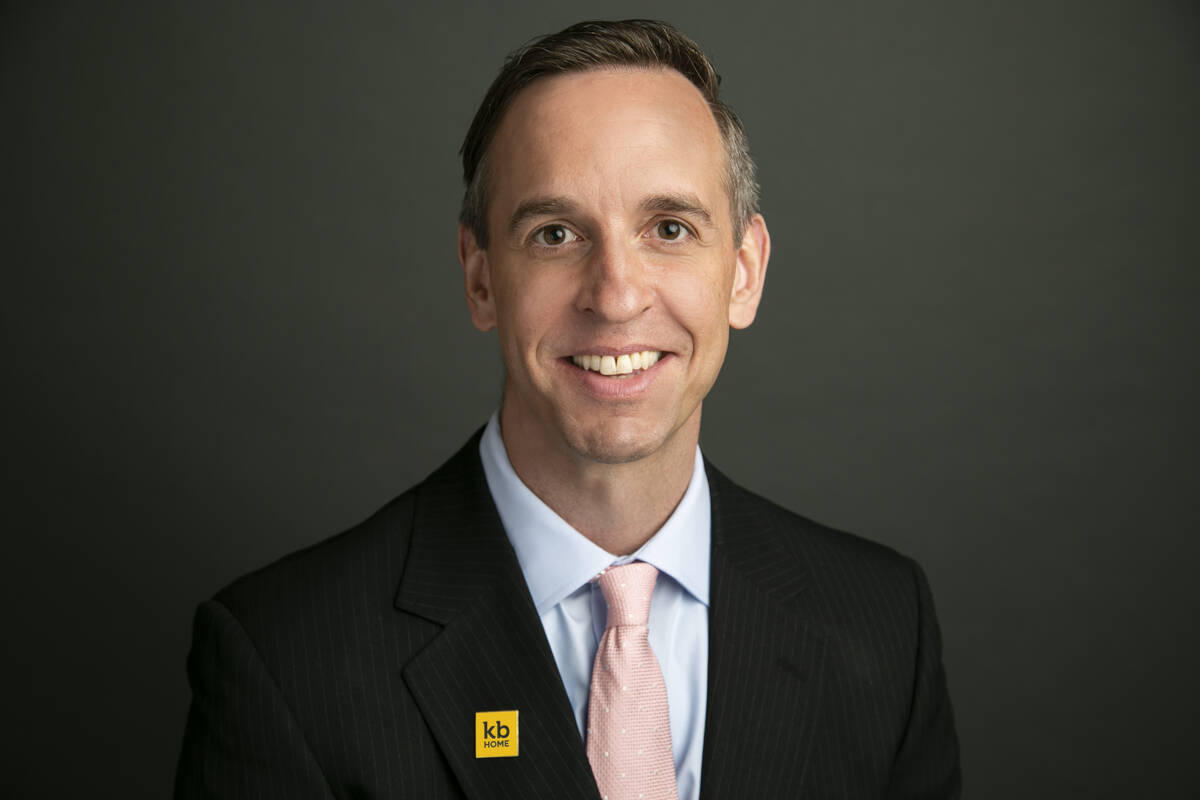 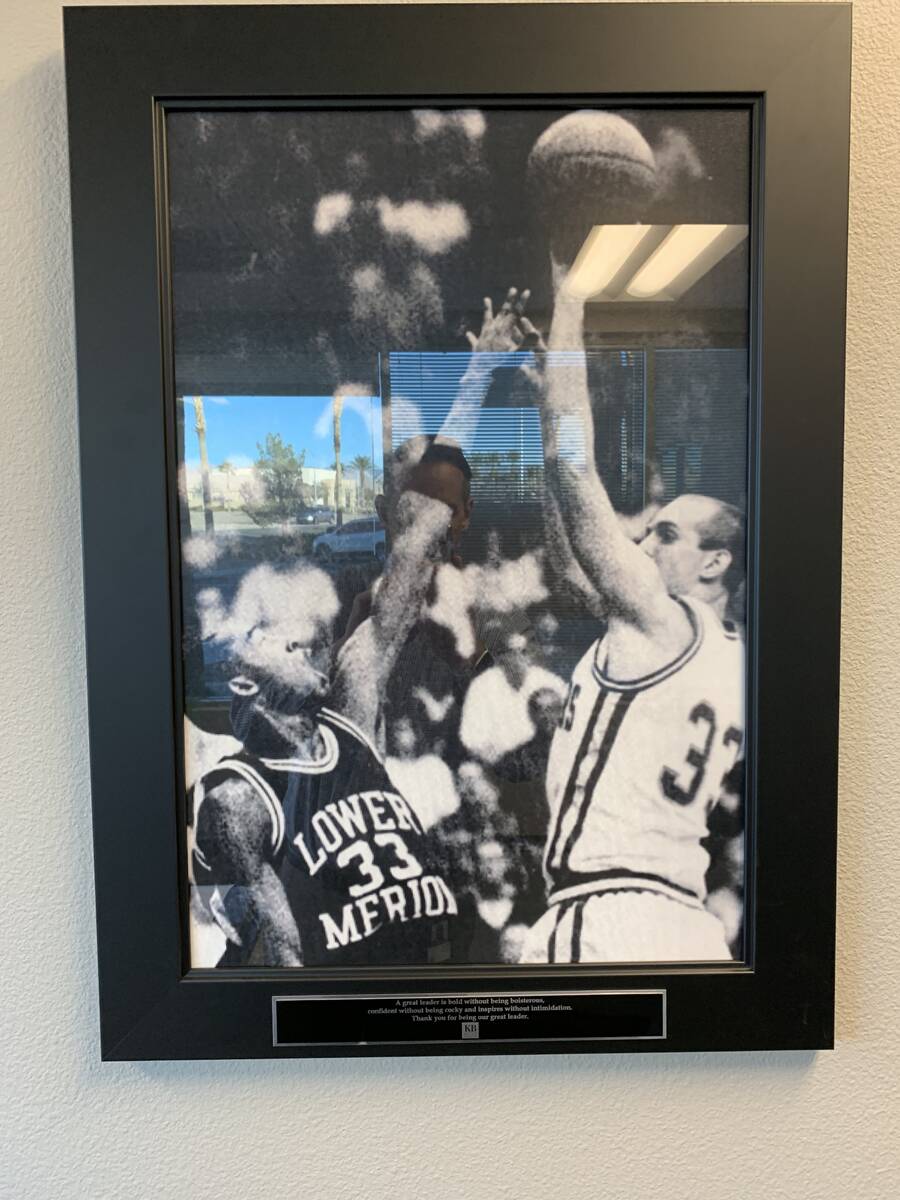 Courtesy of Brian Kunec KB Home's Brian Kunec was a high school basketball star in the Philadelphia area and led his team to the state playoff semifinals, including a win along the way over the late Kobe Bryant’s and his Lower Merion team.

The new board president of the Southern Nevada Home Builders Association is bullish on 2022 coming off the best year for Las Vegas builders since 2006.

“We think 2022 is going to be at least as good as 2021 if not better,” Kunec said. “We are seeing demand far exceed supply. We’re seeing jobs created and people are still moving to Las Vegas. That hasn’t slowed down. We’re still bullish on 2022, and think it will be a great year.”

The 47-year-old Pennsylvania native, regional general manager for KB Home’s Las Vegas, Seattle and Idaho divisions, will spearhead the SNHBA board as it continues to advance the housing and community development needs of the region — including its challenges of the supply chain, labor shortage and limited land supply.

It’s been a long journey for Kunec who at 6 feet 6 inches was a high school basketball star in the Philadelphia area and led his team to the state playoff semifinals, including a win along the way over the late Kobe Bryant and his Lower Merion team. Kunec attended Lafayette College where he played basketball and received a Bachelor of Arts in economics and finance.

Upon graduation, Kunec worked in the New York City area for the accounting firm Deloitte for six years before accepting an offer in 2003 to come to Las Vegas and work as director of finance for what was then known as Shuffle Master, which was later acquired by Bally Technologies.

When an opportunity came open in the homebuilding industry, Kunec in 2004 moved to Pulte Del Webb where he worked as director of finance. He worked his way up to vice president of finance and operations and later worked for Richmond American before moving over to KB Home where he was named Las Vegas division president in 2016.

Kunec served as vice president of the SNHBA board in 2021 before becoming president this year.

“I am excited. It’s a great role to have,” Kunec said. “I look forward to working on behalf of the homebuilders for the industry, itself.”

There’s a lot on the agenda this year and it starts with housing affordability, Kunec said.

“One of the main drivers of housing affordability is trying to increase the supply of new homes because if there’s not enough supply and more demand that’s going to continue to drive the price of homes up and create more unaffordable homes for people,” Kunec said.

One of the big objectives is to work with jurisdictions like the city of Las Vegas and Clark County, for example, to create efficiencies in the approval of new projects, Kunec said. That would help get new communities to market quicker and increase the supply to create more affordability, he said.

The median price of all home types from single-family to town homes rose 20.3 percent year over year in 2021.

“Right now, like everything else in the world, the jurisdictions are dealing with more demand than they have staff and employees,” Kunec said. “They are obviously, doing the best they can with hiring and ramping up. Things are taking longer to get through the pipeline. That’s something we need to work on and one of the biggest things I am going to work with the jurisdictions to try and improve that timeline to get projects quicker to the market.”

Speeding up projects, however, won’t alone solve the problem of rising prices, Kunec said. There continues to remain challenges with getting the supplies and construction materials needed for the homebuilding industry, just like in other industries — a problem that will take time to sort out. In addition, builders continue to have a challenge with getting enough labor to construct homes, which adds to costs and timelines as well, he said.

Without those supply chain and labor issues, builders could have constructed another 1,000 to 2,000 homes in 2021 based on demand, Kunec said. That demand isn’t going away, and builders will have to rise to the challenge to meet it in 2022, Kunec said.

People from California and other states will continue to relocate to Las Vegas for a lower cost of living, lower taxes and entertainment, he said.

“We continue to get an influx of people from outside the marketplace,” Kunec said. “Mortgage rates are starting to inch up but they’re still at historic lows. It’s a great time to buy and people are realizing that as they’re moving to the market or want to upgrade from an old or used home. We’re seeing peak demand because of that. People are able to afford the homes, and I think that’s driving a lot of the success in 2021. We don’t expect that to slow down much in 2022.”

Kunec said there’s likely to be price appreciation again in 2022 because of that high demand and limited supply.

Building with greater density, including town home products, is one way to provide more affordability in 2022. It’s hard to predict what prices will be in 2022 but at least borrowers will obtain the financing they need to help cover the increase, he said.

“As prices have gone up, people are able to borrow more money, which is a positive thing,” Kunec said. “But as long as that continuum of high demand stays in place, we don’t see prices easing in 2022. You’re always going to see pressure on pricing as demand exceeds supply.”

Long term, the industry continues to face concerns with the amount of available land to build more homes, Kunec said. The SNHBA is working with federal lawmakers and local jurisdictions to secure additional federal land for auctions. Legislation to do that is pending in Congress.

“Unless we can get that to happen, land is scarce and it will continue to be a challenge and work against affordability,” Kunec said. “If we can’t get enough land, we can’t bring more homes to the market to meet that demand.”