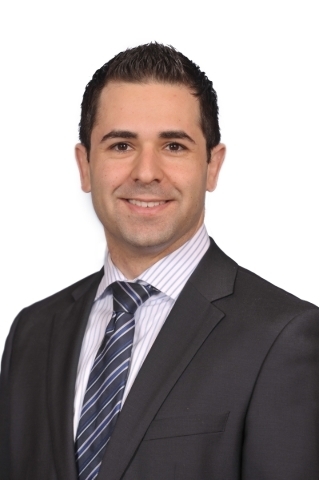 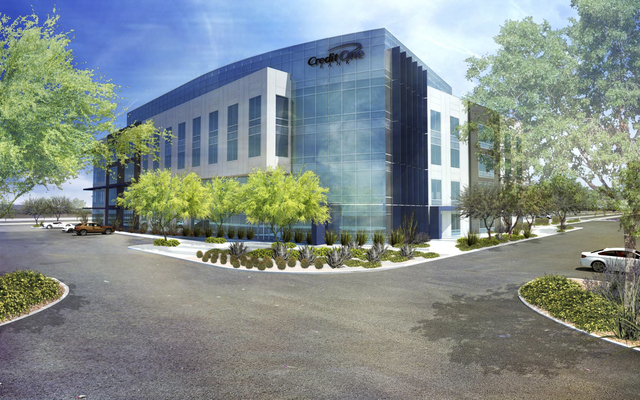 A rendering of Credit One Bank's planned 152,000-square-foot office building, near the 215 Beltway, between Durango and Buffalo drives. (Courtesy)

Leadership at local commercial brokerage MDL Group went searching for a larger space to expand its offices in the southwest part of Las Vegas just over a year ago, not expecting the twists and turns it experienced. At that time, the company’s leaders were looking to either buy or lease an existing structure, but they were eventually led to start construction on a new building.

Hayim Mizrachi, president and principal at MDL Group, said availability of space and climbing lease rates in the southwest submarket were the key elements that led to turning dirt instead of turning a key.

Part of the process of deciding what route to take was evaluating what was available in the market and where MDL wanted to be located: in the southwest submarket, which has also been in high demand for office space tenants over the past several years.

“At the time, we were looking for a building that was 10,000 to 12,000 square feet; there was one very good option off of Rainbow Boulevard,” Mizrachi said. “By the time we went in and reconfigured it for our business, our price was pretty close to replacement cost.”

Lease rates at the time were also taken into account.

The lease rates among all product classes in the office sector have risen since the third quarter of 2014, when the average of asking lease rates, on a full-service gross basis, bottomed out at $2.06 a square foot, said John Stater, research and GIS manager at Colliers International Las Vegas. That number had moved up to $2.18 a square foot, about a 6 percent increase, in the fourth quarter of 2015, when MDL closed on its land parcel.

Average rates in the southwest moved up again to $2.27 a square foot in the fourth quarter of 2016, when MDL broke ground on its 16,500-square-foot project at 5960 S. Jones Blvd., on the northeast corner of Jones and Ponderosa Way.

That number included a 5,000-square-foot building MDL is developing on its 1.93-acre site; that project is up for sale.

Mizrachi said there was some surplus land they didn’t need, so they developed the building.

MDL’s issue with finding certain product types in the southwest office market is not uncommon in Las Vegas.

“Right now, the reason build-to-suits are happening is we’re running out of the nice product along the 215 Beltway,” said Randy Broadhead, a senior vice president at CBRE’s Las Vegas office. “For the most part, buildings are filling in rapidly, and there has been no new construction.”

He explained, “We’re at very high vacancy rates, historically speaking, but in certain areas, pockets of the market, we’re running out of space.”

The region hasn’t been devoid of construction activity since the recession; it’s just slowed down since then.

Construction never came to a halt for Las Vegas’ office sector, though it slowed down, Stater said.

In 2007, there was 3.8 million square feet of space built in the valley, with a little less than half in the southwest and northwest submarkets.

Broadhead said many of developments that have been raised are getting filled: Tivoli Village’s first phase, The Gramercy and office space in Downtown Summerlin.

Howard Hughes Corp. is expanding on its Summerlin project, with the announcement of a planned six-story, 152,300-square-foot office building at Pavilion Center and Griffith Peak drives. The building is speculative.

“In general, office development in master-planned communities is on the upswing, as creating shorter commutes and putting the workplace closer to home has both eco-friendly benefits while boosting quality of life,” said Kevin T. Orrock, president of Summerlin. “Specifically in Summerlin, the success of our Downtown Summerlin Class-A office tower, One Summerlin, easily supports the addition of a second office building in the area.”

The limited amount of space between the southwest and northwest also has led to more build-to-suit projects.

Credit One Bank, a national credit card company, broke ground on its 152,000-square-foot office building at the end of 2016.

John Coombe, Credit One’s senior vice president of communications, said part of the decision to move to the southwest corridor was the convenience for a large part of its employee base.

Build-to-suits are a good tool for out-of-state companies, but some organizations don’t have time to wait.

Taber Thill, a senior vice president at Colliers International Las Vegas, said Las Vegas has missed out on a couple of opportunities.

Thill said anything over 25,000 square feet in the office sector is a challenge across the valley.

In the southwest, putting together a large parcel of land is also not easy along the 215 Beltway, though it’s one of the areas of town where land is available, Thill said.

Once land dries up, there could be new types of development.

“If they run out of that (available land parcels) and rents catch up, then you’ll probably start seeing some vertical construction, probably more along the lines of Class A office development,” Thill said.