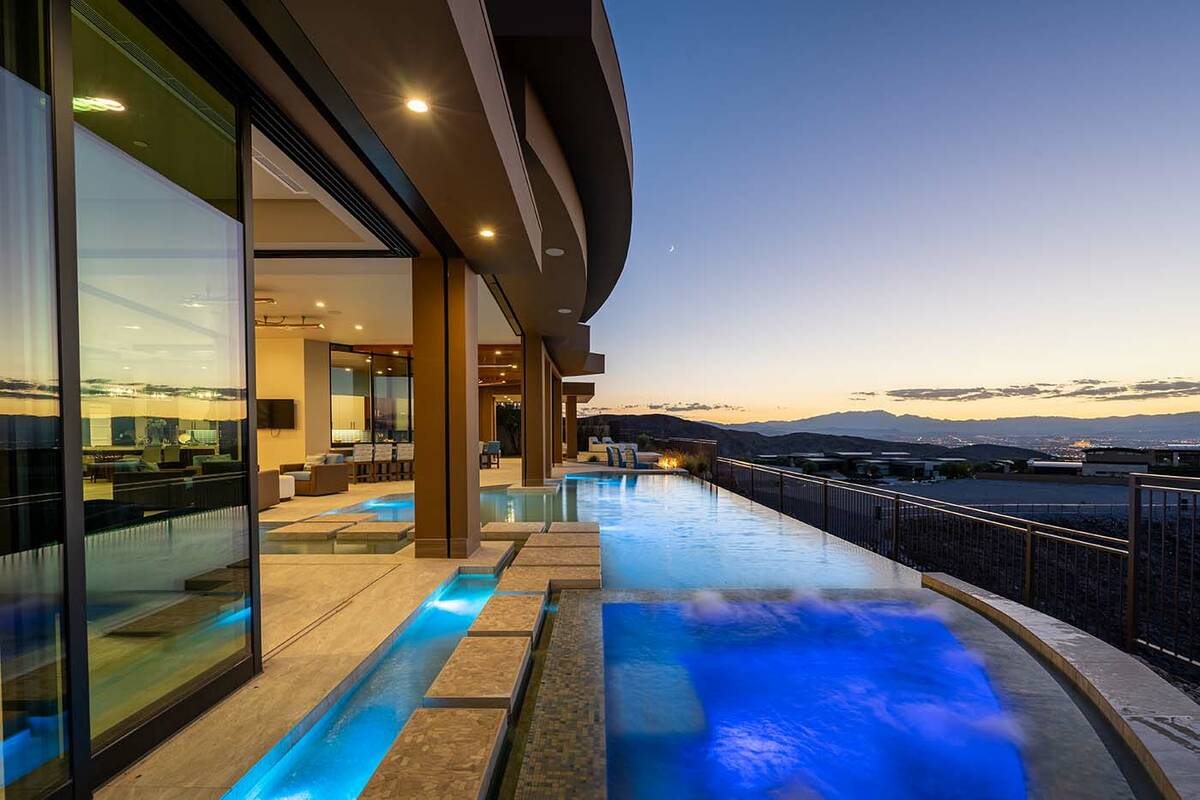 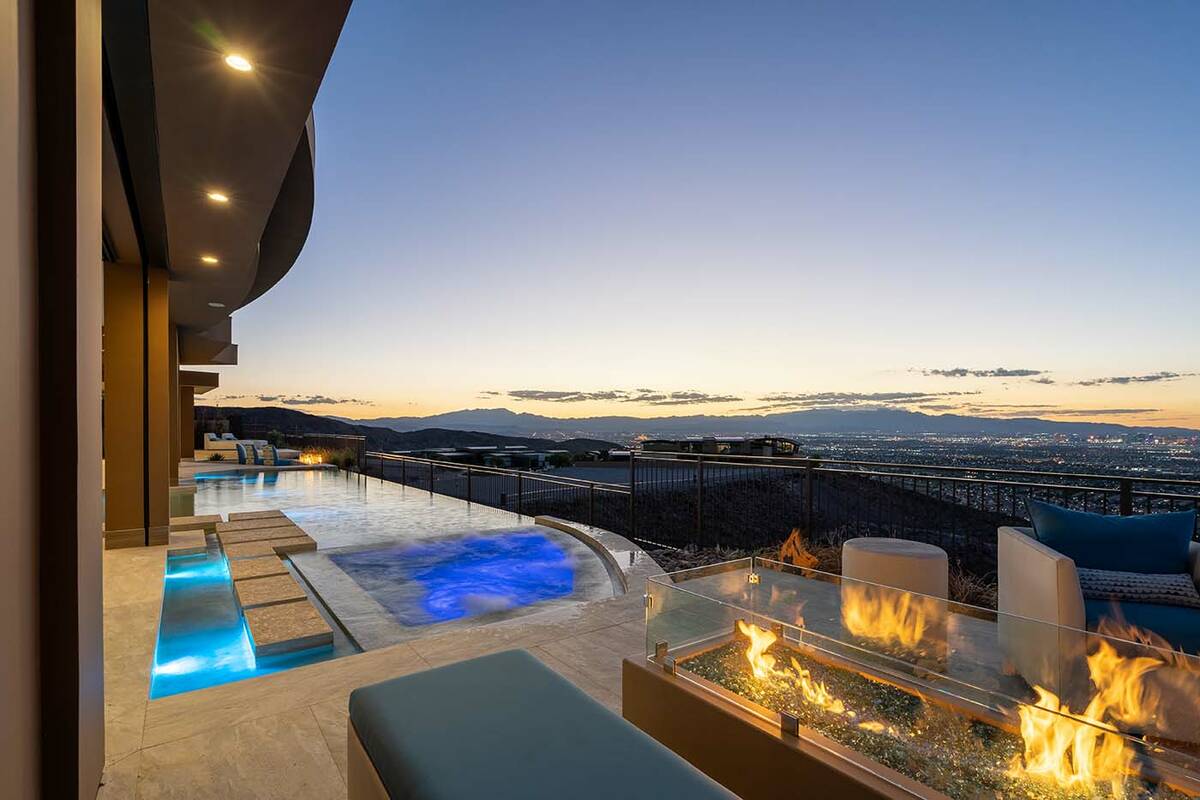 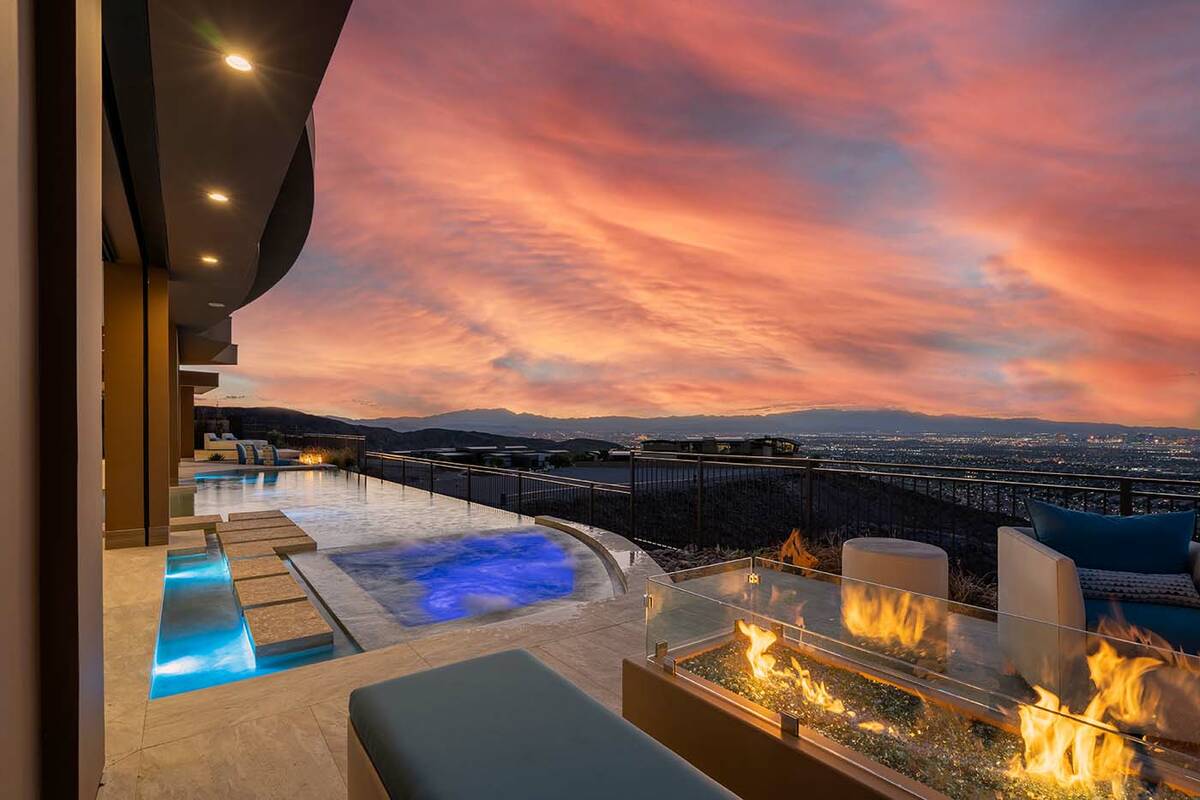 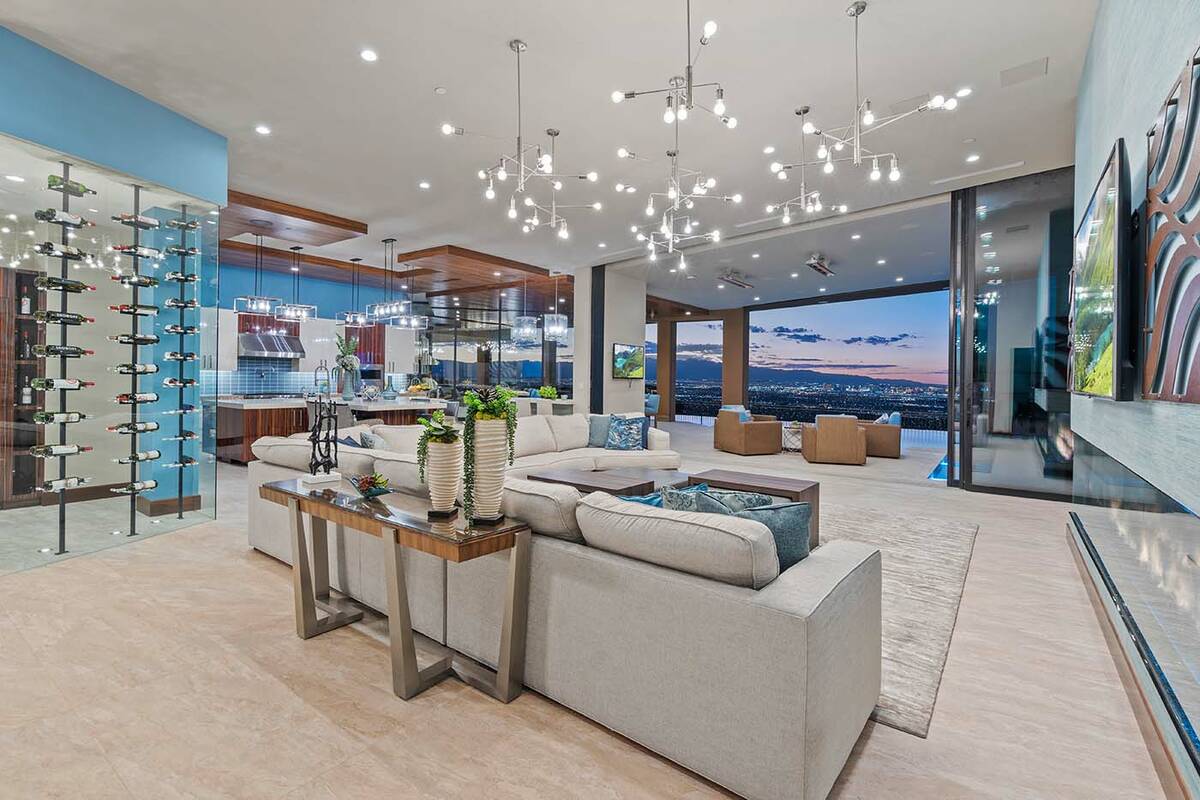 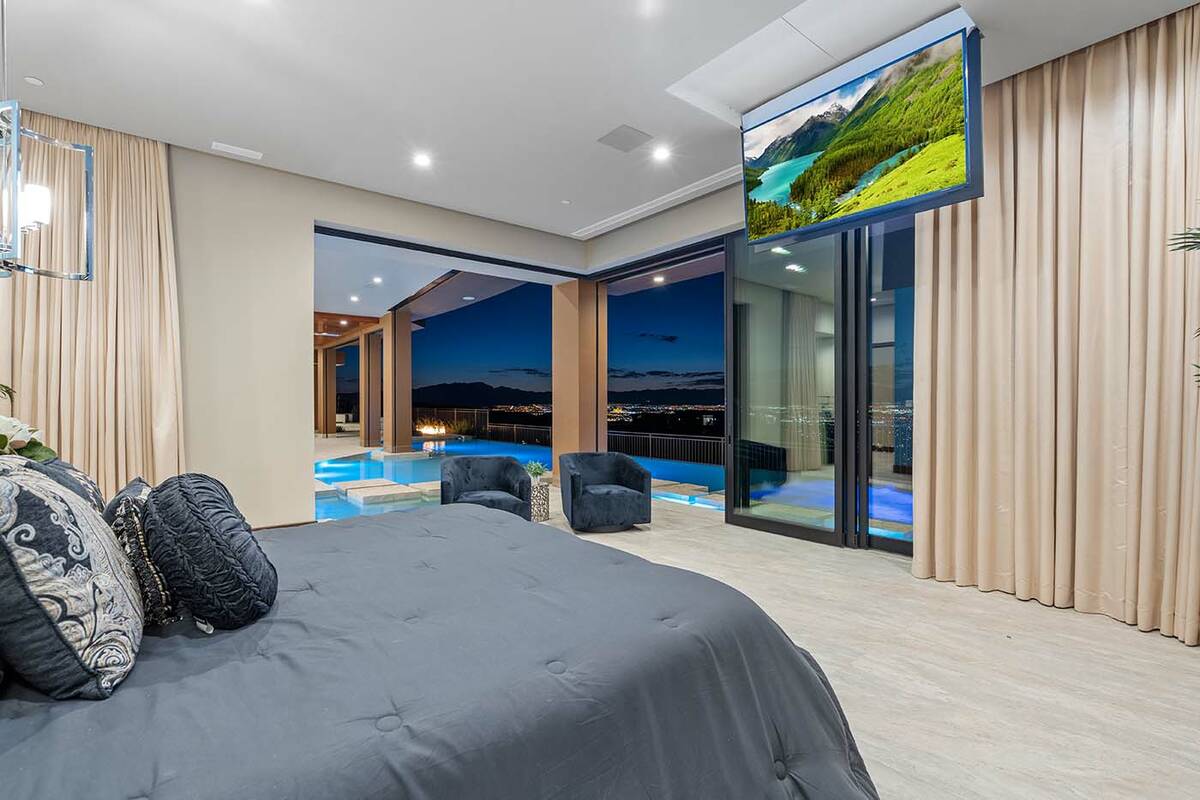 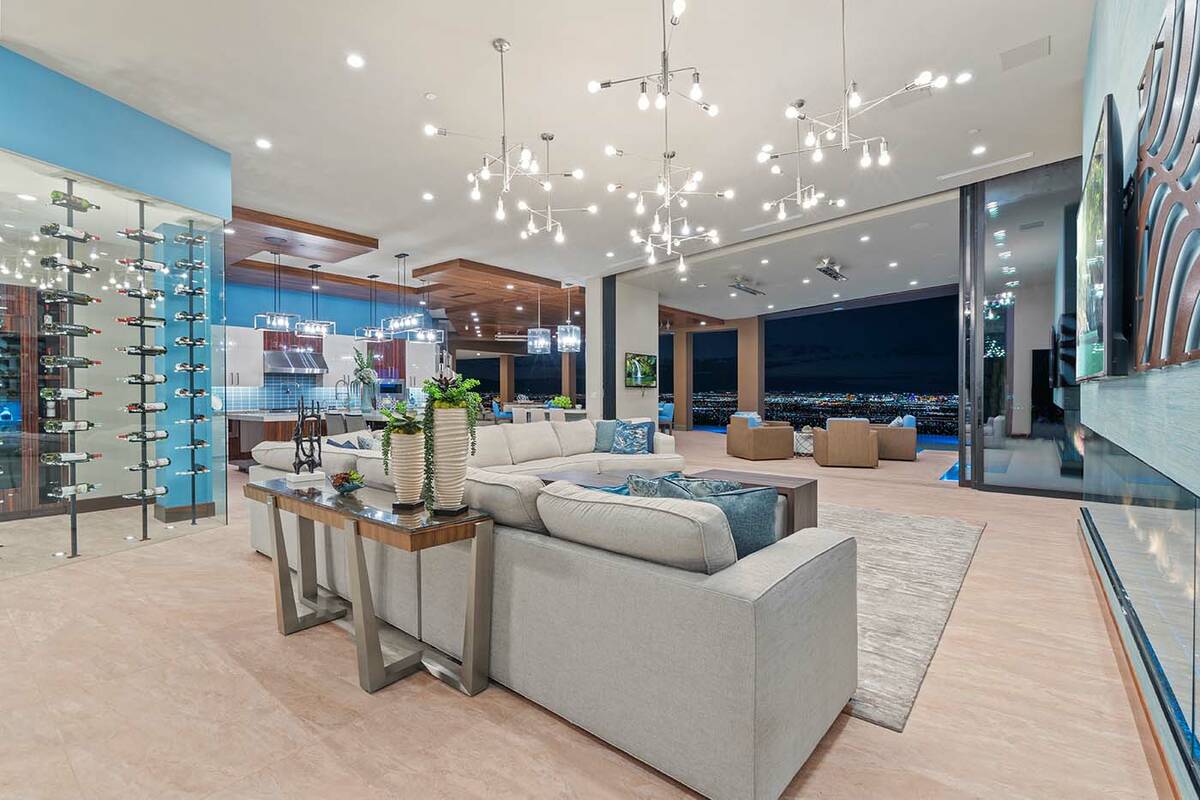 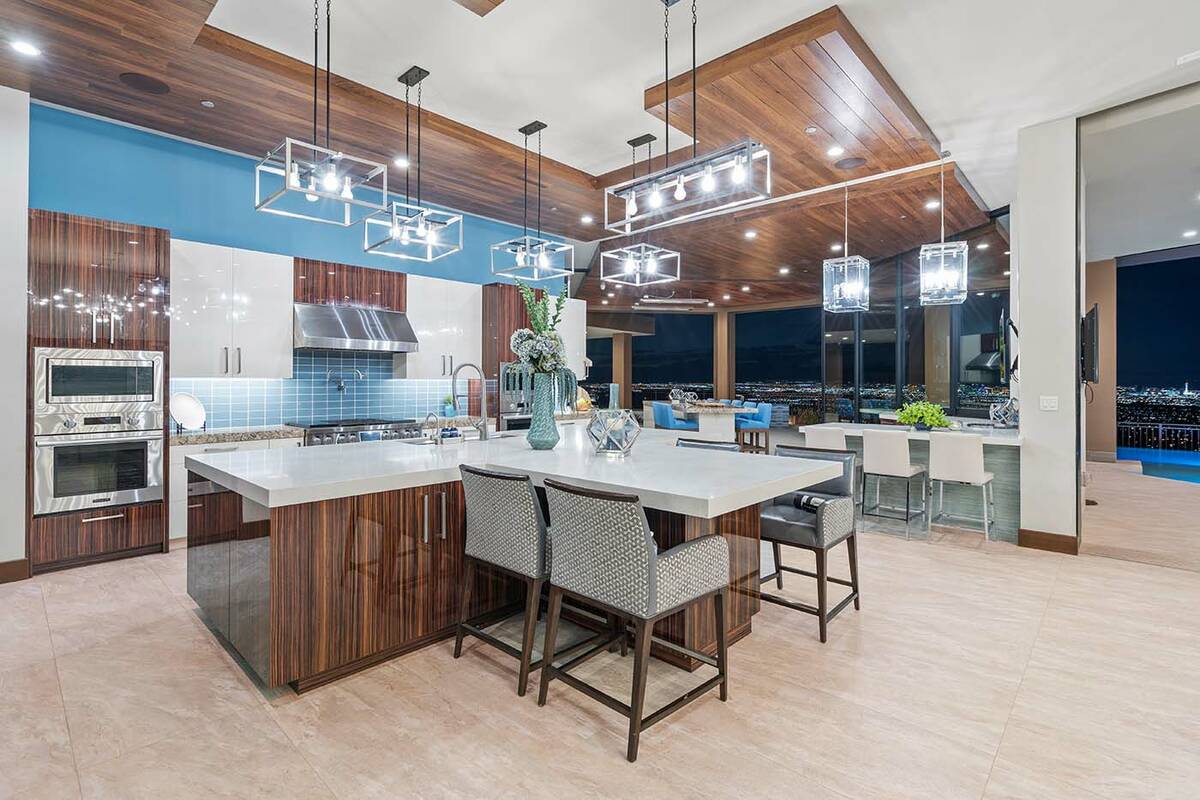 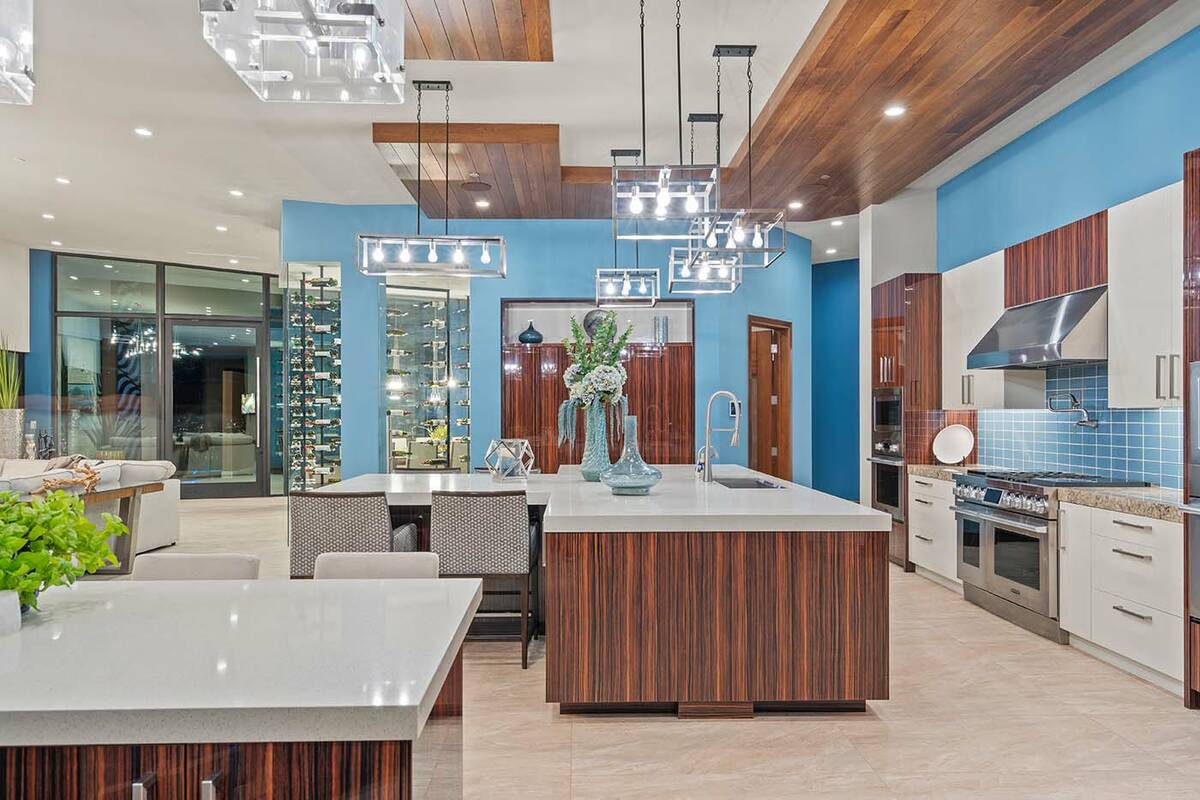 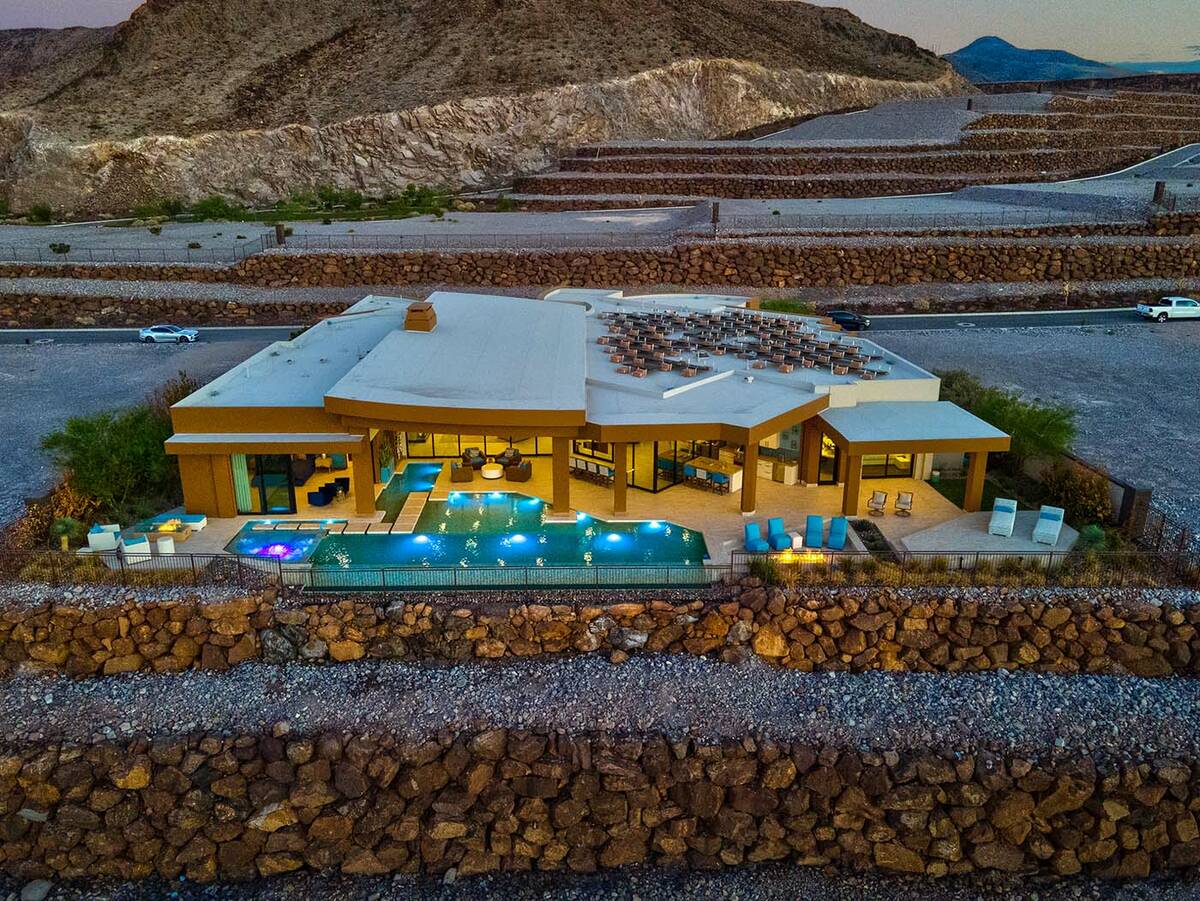 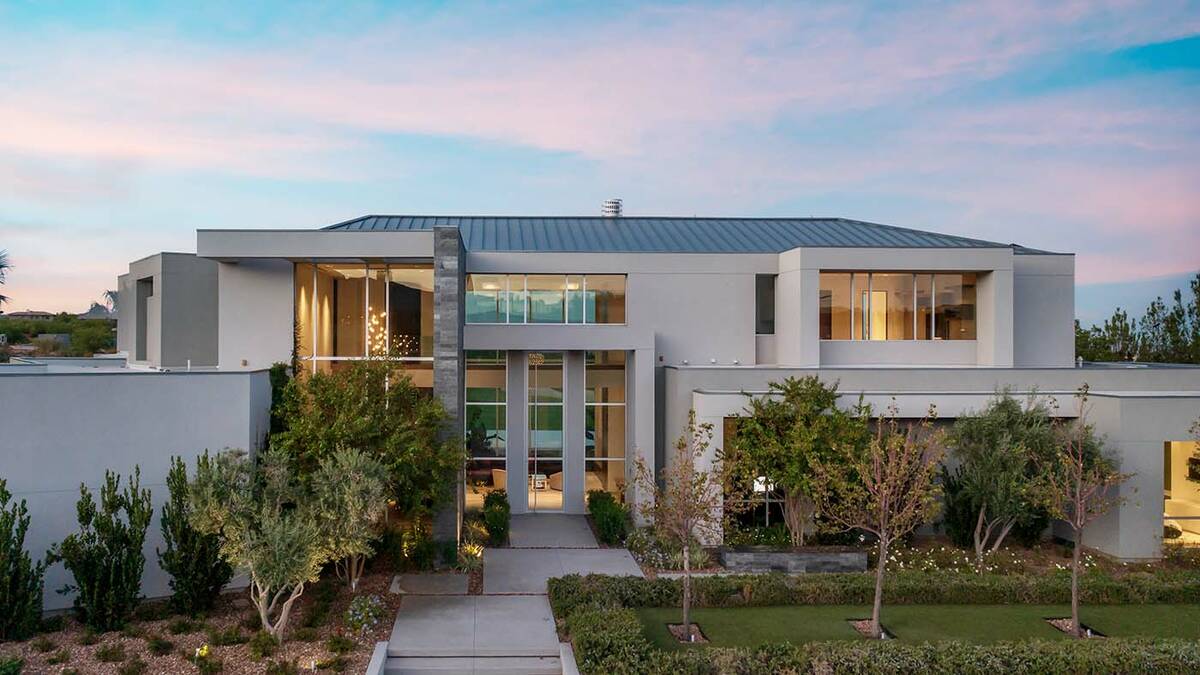 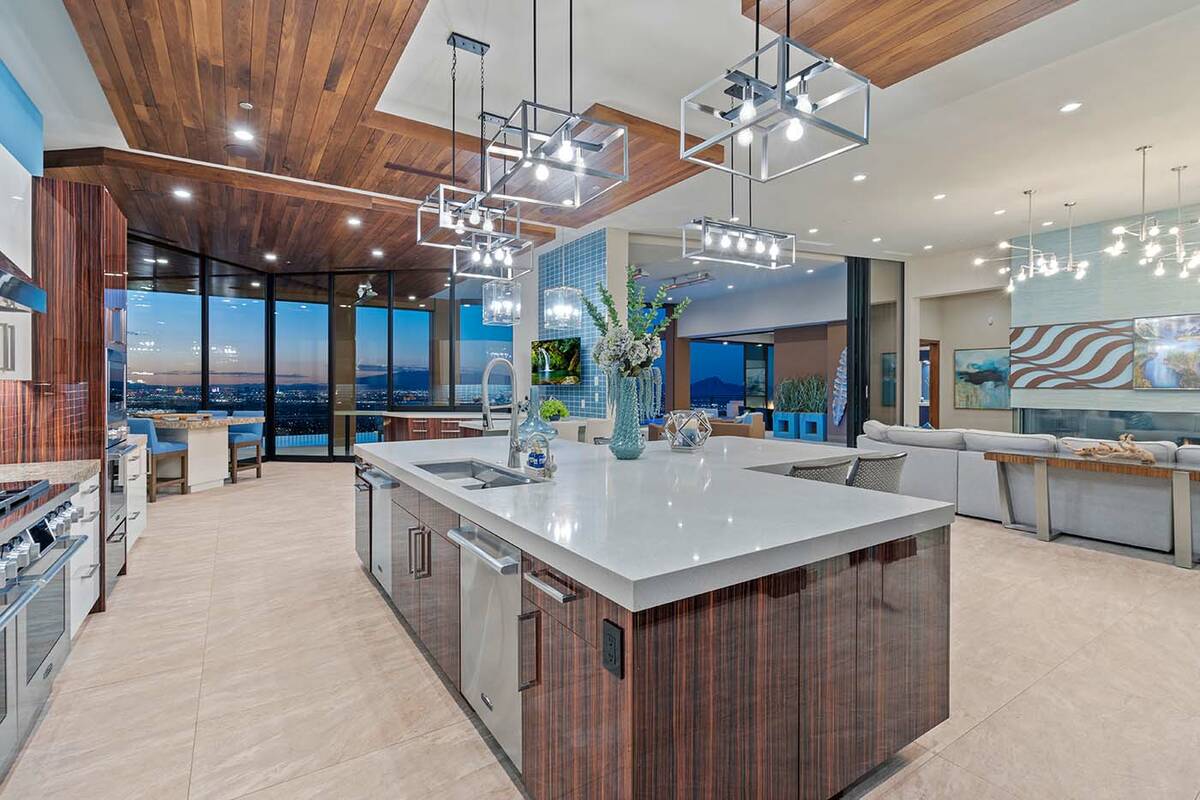 eXp Realty The No. 2 sale in November was for $6.6 million in Ascaya in Henderson. Built in 2021, the one-story home that sits on 0.5 acres measures 6,330 square feet with five bedrooms, four full baths and two partial baths. 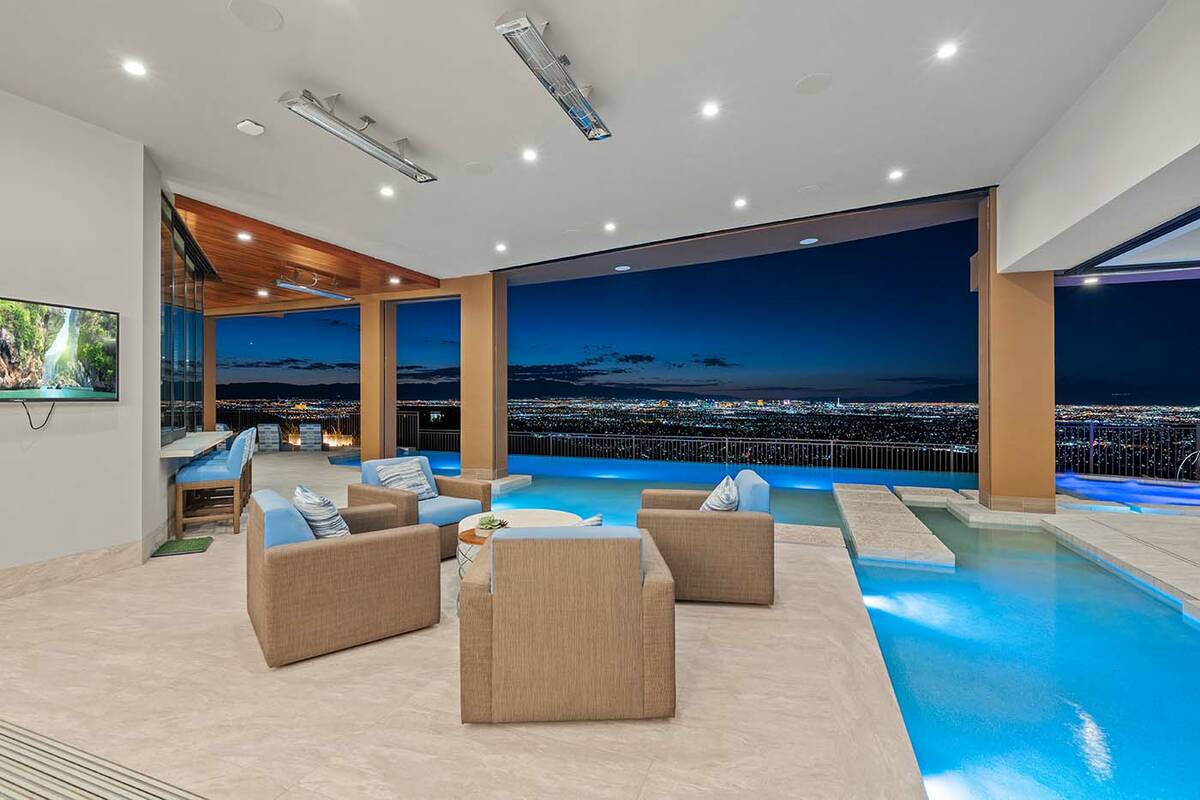 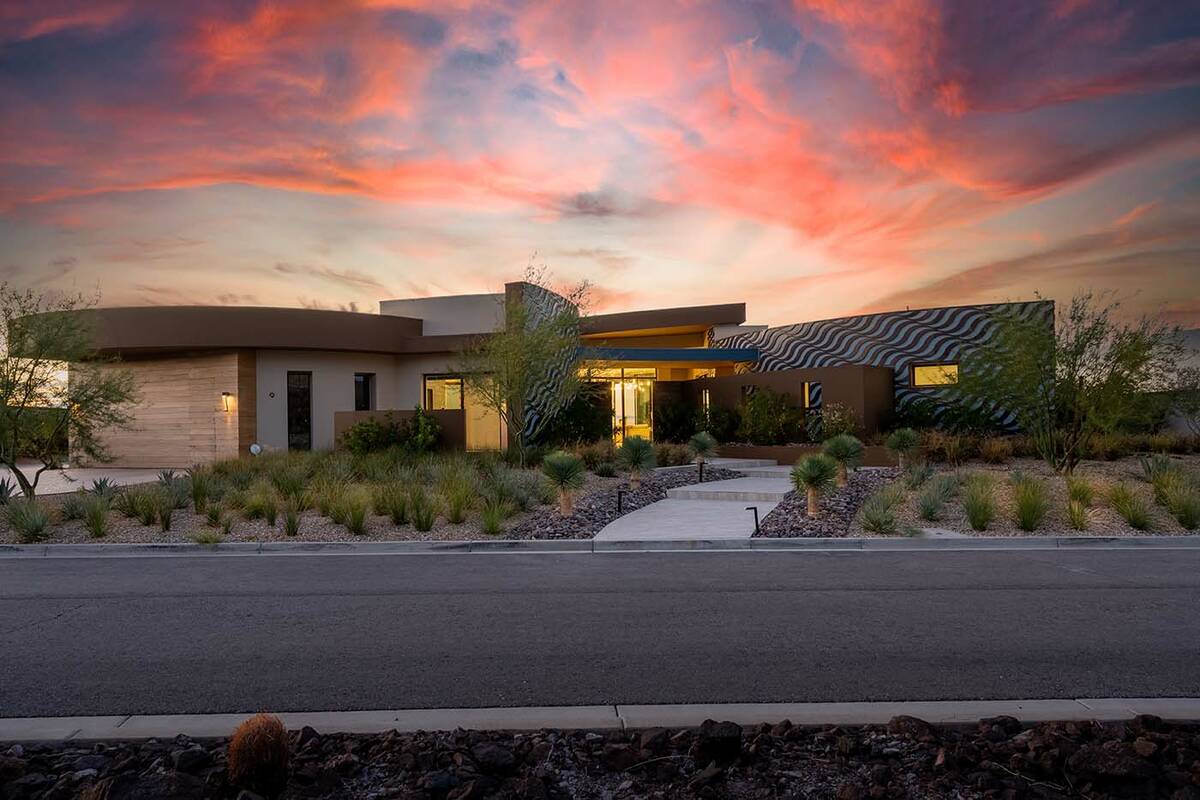 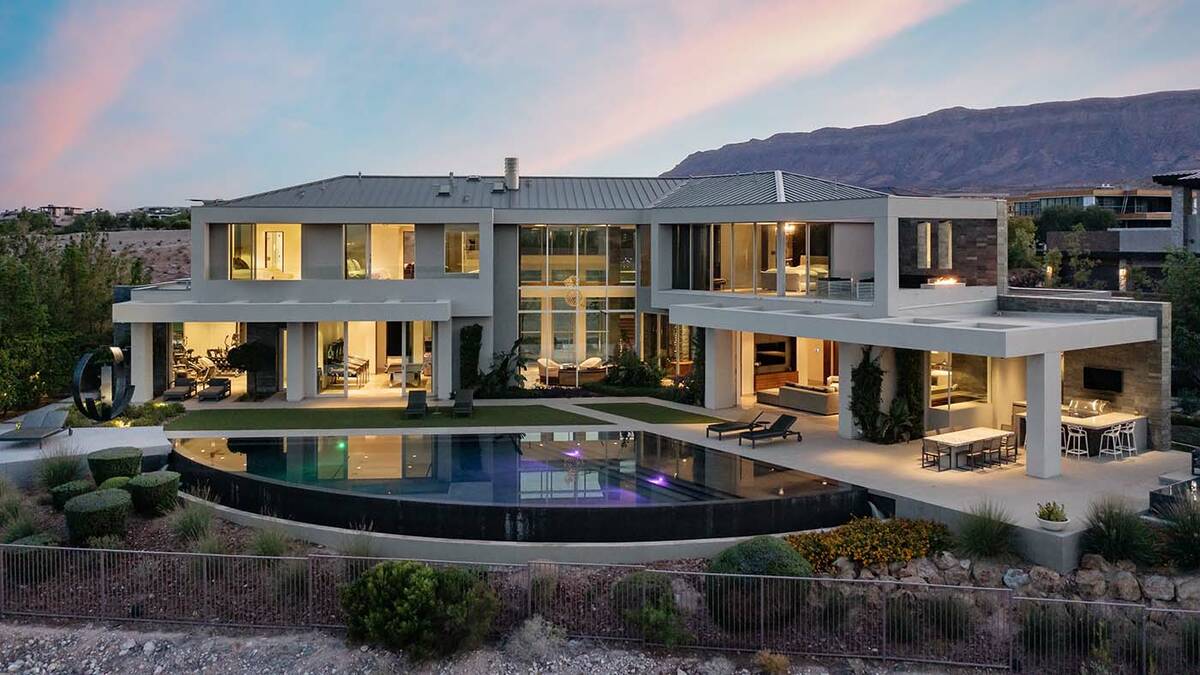 Simply Vegas The $10 million Summerlin home is situated along the fifth fairway at Bear’s Best golf course with a large backyard and a pool. 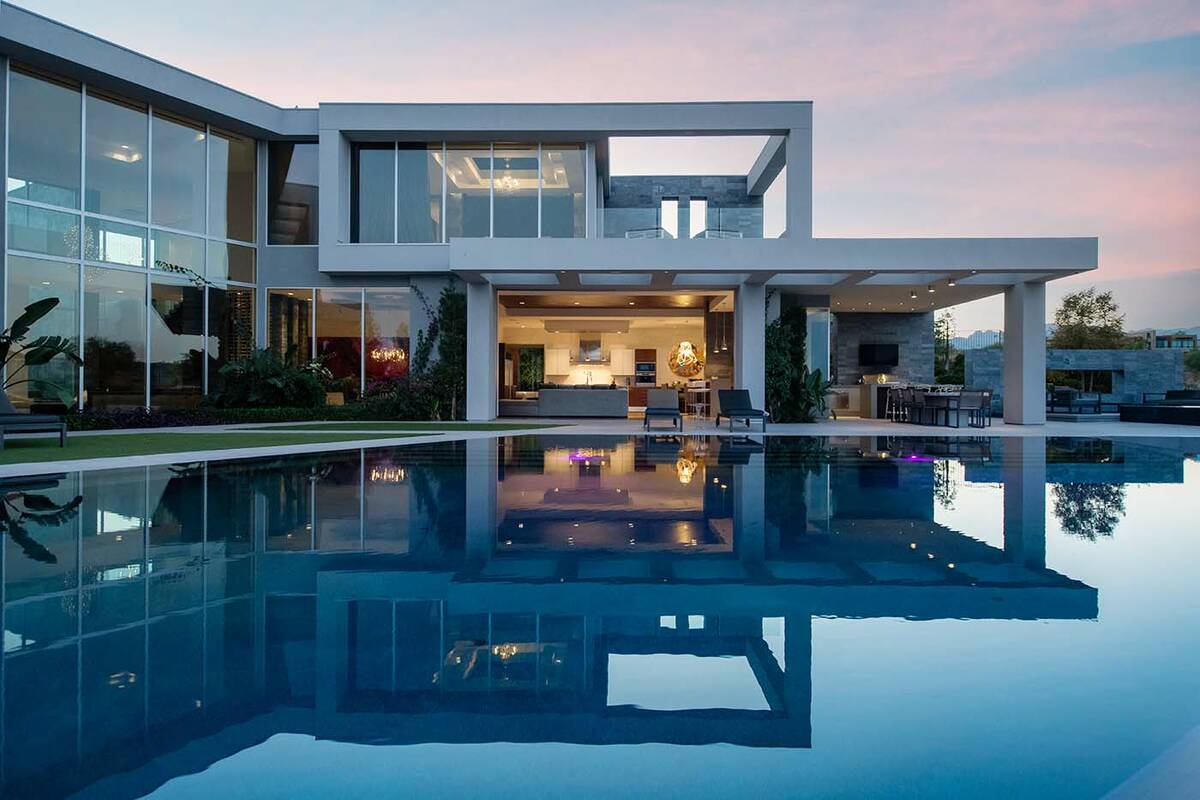 Simply Vegas This Summerlin home fetched $10 million and was the top luxury home sale in November for Las Vegas.

As the luxury home market records its slowest month in more than two years, the uber luxury category delivered in November with a $10 million sale in Summerlin

The two-story custom home on 0.64 acres in The Ridges measures 7,733 square feet with four bedrooms, 5½ baths, gym and movie theater. There’s a four-car garage for the home built in 2014.

“It’s a beautiful modern home with exceptional views of the city,” Ernstone said. “All the bedrooms have en suite baths.”

The home is situated along the fifth fairway at Bear’s Best golf course with a large backyard and a pool, Ernstone said.

The No. 2 sale in November was for $6.6 million in Ascaya in Henderson. Built in 2021, the one-story home that sitson 0.5 acres measures 6,330 square feet with five bedrooms, four full baths and two partial baths.

Listing agent Joe DiRaffaele with eXp Realty, said, “The creative design of this masterpiece is the living spaces all open to the infinity-edge pool that overlook the entire valley below.”

The primary suite features the same indoor/outdoor experience, views and steps to the pool. The primary bath has a walk-in closet with a dressing room and an indoor/outdoor shower. Each of the five bedroom suites have their own entrance to the patio and outdoors.

Charles Eshnaur of Signature Real Estate was the buyer’s agent.

The No. 3 sale of the month was a $5.1 million home in Lake Las Vegas in Henderson. The one-story home built in 2021 measures 5,793 square feet and sits on 0.5 acres. It has four bedrooms, four full bath and two partial baths. It has a four-car air-conditioned garage. Gene Northup with Las Vegas Sotheby’s International Realty is the listing agent and buyer’s agent.

Designed by architect Mark Ross Johnson, who drew the sky bridge over the Grand Canyon, it was built by Las Vegas Luxe Design Build. The home with 14-foot ceilings has a theater and game room, office, wine wall, glass pocket doors and porcelain floors. The backyard has an infinity pool and rooftop cabana with great views of Lake Las Vegas, Northup said.

There were 71 closings of $1 million and higher in November, the fewest since there were 69 in July 2020 as the luxury housing market started to take off after the initial slowdown from the COVID-19 pandemic, according to Forrest Barbee, corporate broker at Berkshire Hathaway HomeService. There were 105 sales in October.

Ernstone said it’s difficult to tell where the luxury market is heading but his best guess is that the market will pick up in March. The rising mortgage rates were part of the Federal Reserve’s plan to ease inflation, he added.

“We have seen very few houses come on the market so we’re not anticipating any reduction in prices,” Ernstone said. “We are not seeing the insane pricing movements we have seen in the last couple of years. There’s an opportunity for buyers to find a house they really like and not be in multiple-offer situations.”

Ernstone said his $10 million sale shows that for the right house, there are buyers in the market.

Northup said he believes the slowdown in the housing market is temporary, but there’s so much going on in the financial markets that it’s distracting the upper-income buyer.

“First we had the stock market (decline) and the crypto crash and FTX, every time there’s uncertainty in the market everyone stops and watches,” Northup said. “I think they’re stopping and watching. People like consistency and security in life.”

Northup said because of all “the good things going on in Las Vegas” with the F1 race coming in November, the Super Bowl in February 2024, and the prospects for an NBA and MLB team, even if there’s a U.S. recession, the city will be well-positioned. When people stop going to Europe, they come to Las Vegas, he said.

“We are optimistic next year that we are going to have a pretty decent year on the upper end,” Northup said. “The lower end is a whole different story. The interest rate has locked that lower end.”

Barbee said it is difficult to tell how long this luxury slowdown will last. It started in June with the inability of monthly closings to match the comparison to the same months in 2021, he said.

“It seems everybody is being affected by what’s going on politically and economically,” he said. “It hit luxury last.”

Barbee said because supply has slowed down and that has contributed to fewer closings as well. There’s a lot of people that would like to sell but there’s no place to go, he added.