Skip to content
Sign up for our newsletter
section-ads_high_impact_1
BY BUCK WARGO LAS VEGAS BUSINESS PRESS
March 8, 2021 - 10:16 am 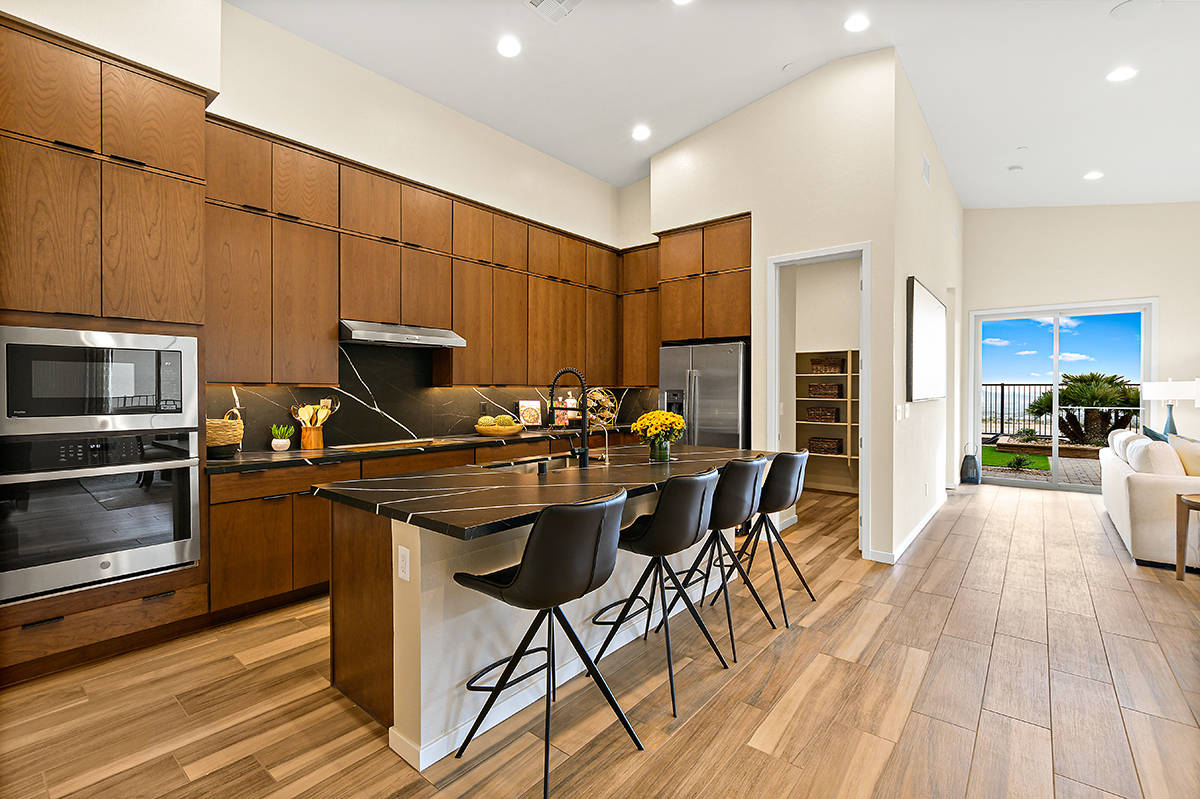 Taylor Morrison started sales in November at its Cascades project in the new Redpoint Village project in Summerlin. It’s a gated community with 54 homesites. Homes prices start at $410,000. (Taylor Morrison) 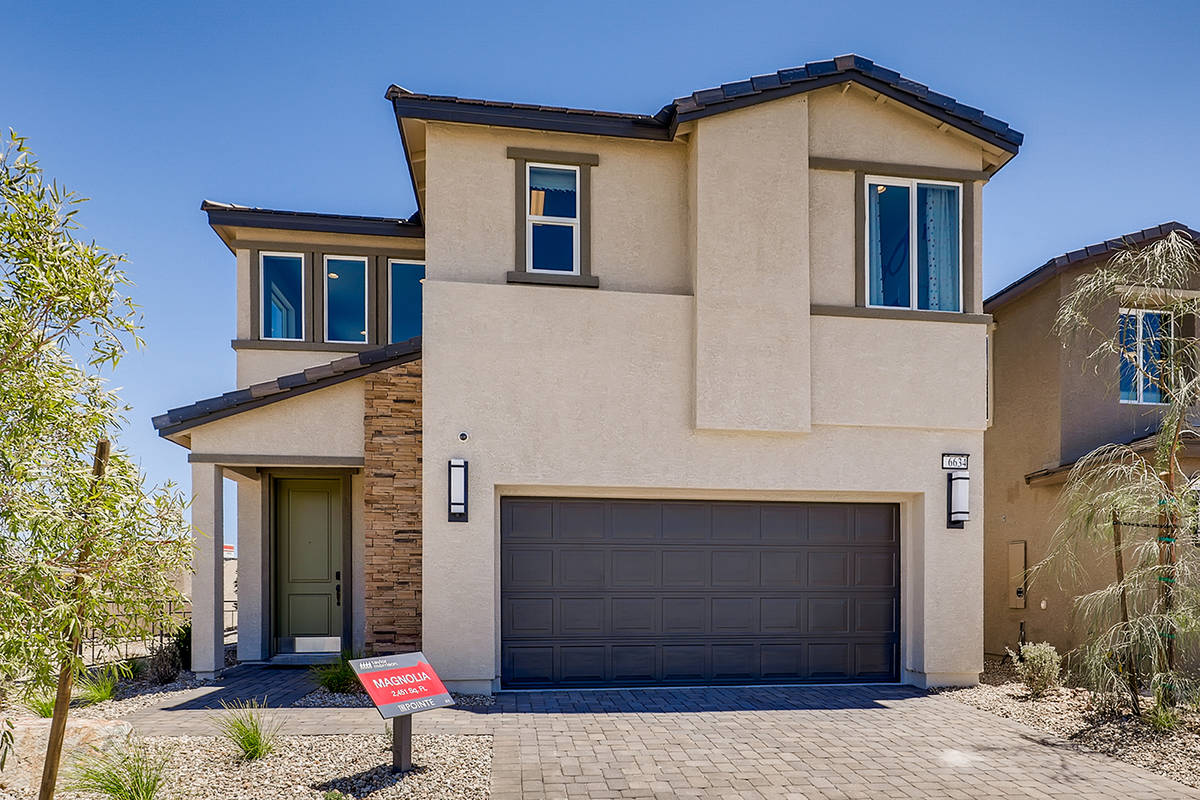 After one year of building homes in Las Vegas, Arizona-based Taylor Morrison has plans to expand its footprint across the valley. Taylor Morrison entered the local market when it merged with William Lyon Homes in 2020. (Taylor Morrison) 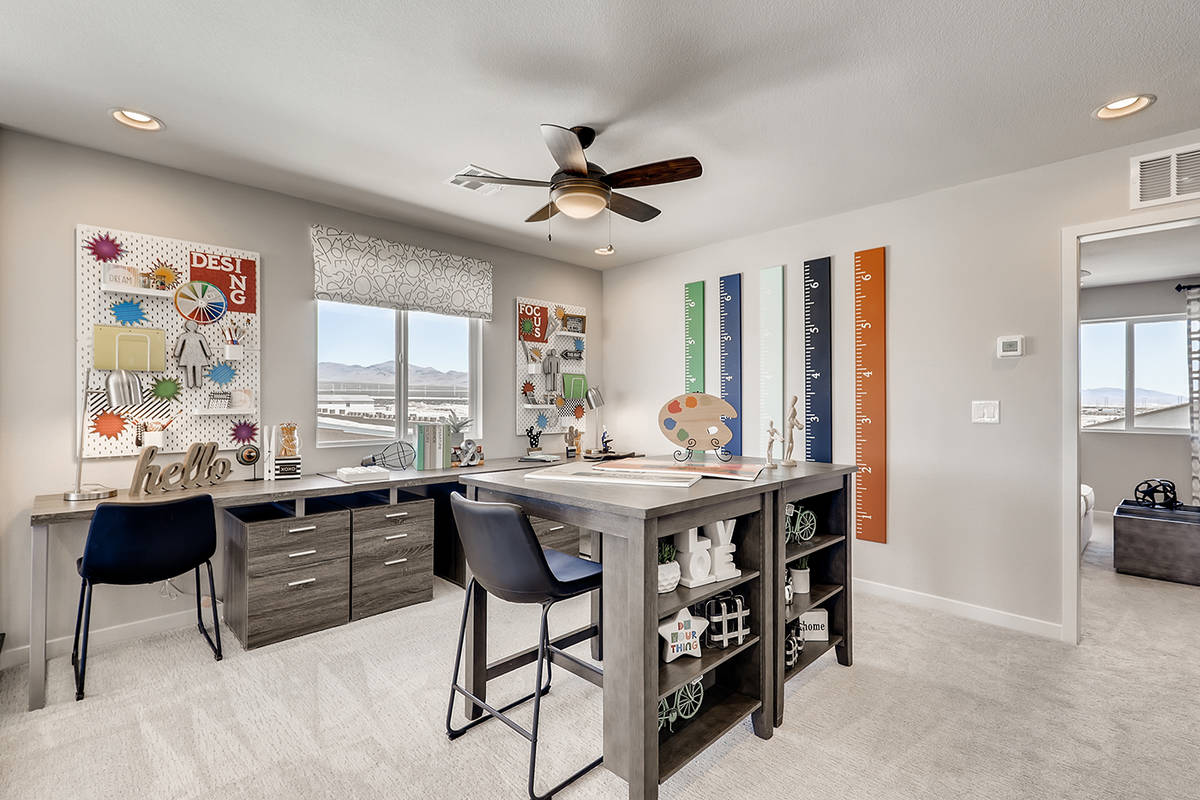 Taylor Morrison launched its first community in July at Palmer Ranch in North Las Vegas at the start of the COVID-19 crisis. The 85-acre development where more than 405 homes will be built will offer homes that range in price from $305,000 to $440,000. (Taylor Morrison) 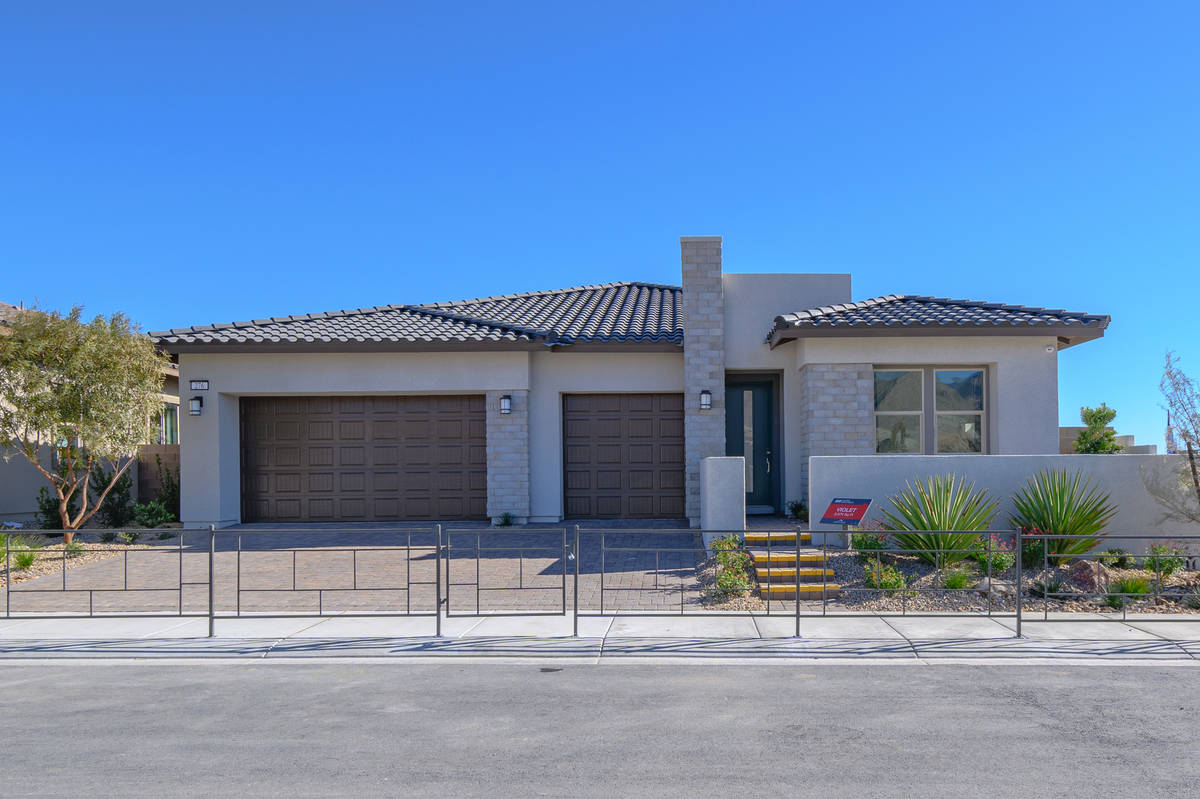 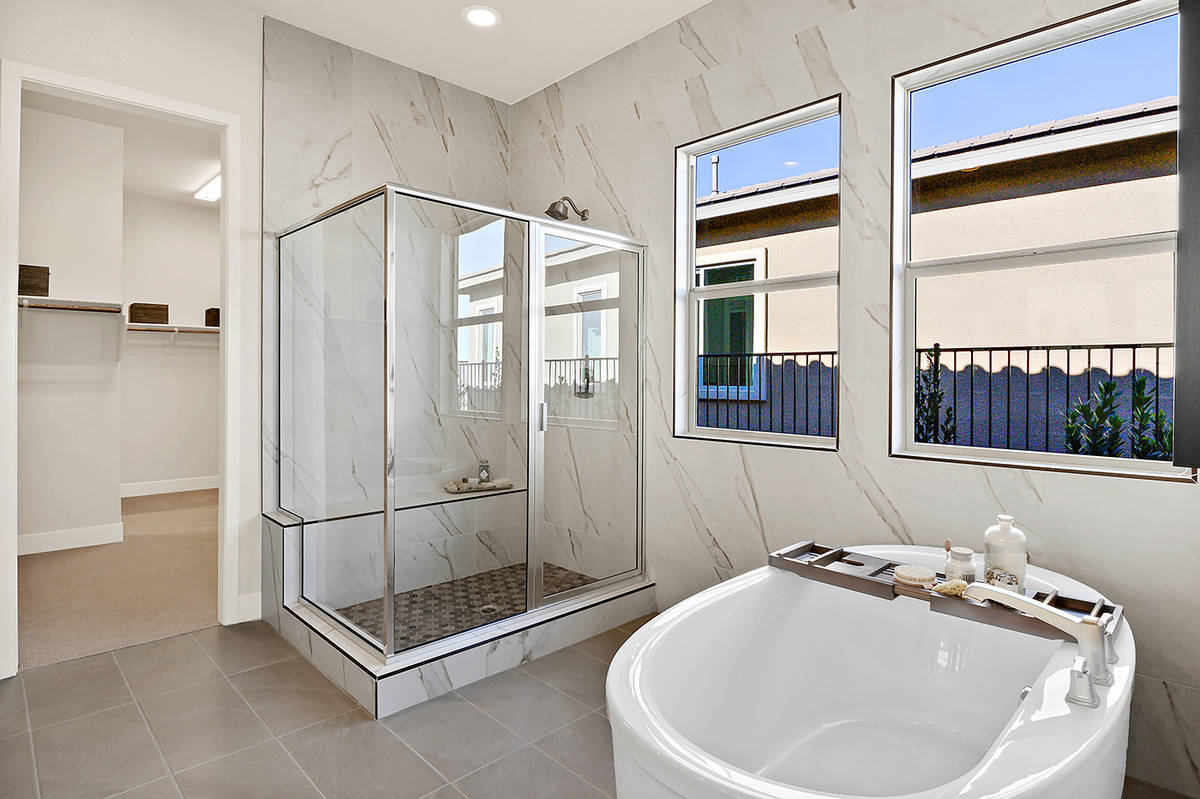 It’s been quite a 12 months for new Las Vegas homebuilder Taylor Morrison, and in 2021 the Arizona-based company said it will be more aggressive and expand its footprint in the valley.

Taylor Morrison was in Las Vegas for only a month in 2020 after its acquisition of William Lyon Homes when the coronavirus pandemic shut down casinos and businesses and sent a shock wave through the valley’s economy — more so than other parts of the country that have a more diversified economy.

Builders faced cancellations as customers lost or feared for their jobs, and the recovery of the housing market didn’t start until June. But it unexpectedly skyrocketed after that.

In both years, Taylor Morrison and William Lyon ranked No. 11 in the valley among net sales.

Look for that to change in 2021, Division President James Gomez said. Taylor Morrison opened several communities in the second half of 2020 and plans to expand its reach across the valley even more in 2021.

“In 2021 we should at least double our business,” Gomez said. “We’ve been super aggressive with our land acquisitions since 2019 and have been blessed with some really good relations with the folks over at the Howard Hughes Corp. in Summerlin, other master plans and large land sellers. Our strategy was to grow scale. I want to get into the top-five position share in the valley but not to just have unit count. There are so many benefits in Las Vegas to being large, and we’re pursuing that. This is probably the most concentrated market from a competitor standpoint. The top 10 builders have about 90 percent market share. In contrast, Dallas’ top 10 have 50 or 55 percent.”

In November 2019, a $2.4 billion deal was announced between the two publicly traded companies that took Taylor Morrison into Nevada, Oregon and Washington for the first time and added to its inventory in California, Colorado, Arizona and Texas — making it the fifth-largest builder in the nation.

No one counted on COVID-19 right after the merger closed in February 2020.

“It could have not been more perfect timing for a merger to happen, said Gomez, who joined William Lyon in January 2019 and oversaw the merger in Las Vegas.

Since 2013, William Lyon had moved into the high-end semi-custom luxury market “that was a phenomenal opportunity for a number of years,” Gomez said. “As those opportunities started winding down, I immediately saw an opportunity to move in a way to significantly grow our scale economies in the market and grow our community count and reinvent ourselves. The better part of 2019 for me at William Lyon was finding projects all across the valley at a wider dispersion of price points from $300,000 to $800,000. I had a once-in-a-career opportunity to completely reinvent our product portfolio. When the merger happened, the timing could not have been more perfect because we were at the cusp of rolling out our new communities and product and making a significant splash with the Taylor Morrison brand in the marketplace.”

Gomez said he has been part of four mergers in his career, and this one has been the best cultural match on many levels and a smooth transition.

Taylor Morrison launched its first community in July at Palmer Ranch in North Las Vegas during what Gomez said had to be one the toughest years possible, dealing with COVID-19 and restrictions placed on the homebuilding industry from construction to just showing model homes to buyers.

There also have been challenges with the high price of land because of limited availability and with high lumber prices and lack of materials and products from supply chain disruptions because of the pandemic. That has led to delays in the delivery of homes anywhere from a couple of weeks to three months, Gomez said.

Buyers have been plentiful.

In 2019, the builder was averaging 29 percent to 35 percent out-of-state buyers, and today it’s 50 percent to 60 percent of buyers from outside Nevada. Two-thirds are from California, and the trend is people moving from high-density areas because they can work from home, he said.

“The local economy suffered more than most markets,” Gomez said. “But we rapidly started to see after the massive spike in fear and shutdown that when things started to open a little bit, there was a significant pickup of in-migration of people fleeing from New York City, Los Angeles or San Francisco. That has been a tailwind in a way for the Las Vegas market.”

Demand has been strong with a lack of supply of resales homes. One of the problems, however, is a standing inventory of new homes in the low hundreds in the marketplace, Gomez said. It should be 500 to 1,000, he said.

“People will come in to buy homes, but we’re not, as an industry, able to meet the demand for people that need inventory right now,” Gomez said. “We have an aggressive goal to start a number of new inventory homes here in the first and second quarter based on these low numbers. We’re doing the best we can to serve the community.”

It has another Redpoint project called Savannah — 170 lots and two product lines in the high $500,000s and mid-$600,000s — that opened in November. Taylor Morrison closed on a site west of that in which 120-home development will start later this year. South of the Reverence development and south of Lake Mead Boulevard, Taylor Morrison is working to have a 126-home project similar to Cascades.

“We’re blessed to have worked out a number of land transactions with Howard Hughes and couldn’t be more excited how well they have gone out of the gate,” Gomez said. “Summerlin has been one of the top-ranked masters plans in the United States and a great partner to work with. Homes are in such high demand there.”

William Lyon had developed Silver Ridge and Sterling Ridge in the Ridges in Summerlin, building more than 900 homes with the highest prices at $1.7 million. It also has its Affinity town homes and condo project that is 80 percent completed with 575 units. It is priced in the mid-$300,000s to mid-$400,000s.

It also will be building homes north of St. Rose Parkway near M Resort. Taylor Morrison is closing out its Peaks and Lago Vista communities in Lake Las Vegas and plans to buy more land and build there in the future. He said they would love to build in Cadence in Henderson if they have a chance.

“I not only see great opportunities in Summerlin but in Lake Las Vegas and Henderson,” Gomez said. “There’s a lot of solid opportunities where larger products could work. It’s just a matter of finding the ones that make the most sense, today.”

Gomez said Taylor Morrison will be participating for the first time in federal Bureau of Land Management auctions and those near McCarran International Airport.

Taylor Morrison also has its Mountain Falls master plan in Pahrump with single-story homes that start in the low $200,000s. They start at 1,430 square feet to 2,500 square feet.

“We get a number of buyers from Las Vegas that want to live in a golf-course community and just move away from the bustle of the city,” Gomez said. “People from Seattle and California have come into that area as well.”

What Taylor Morrison is building also meets the demand during the COVID-19 pandemic, he said. There is a greater focus on healthy homes with the installation of easier-to-clean surfaces and appliances, advanced filtration systems for air and water and low-VOC paints.