Skip to content
Sign up for our newsletter
section-ads_high_impact_1
BY STAN HANEL LAS VEGAS BUSINESS PRESS
October 5, 2021 - 10:01 am 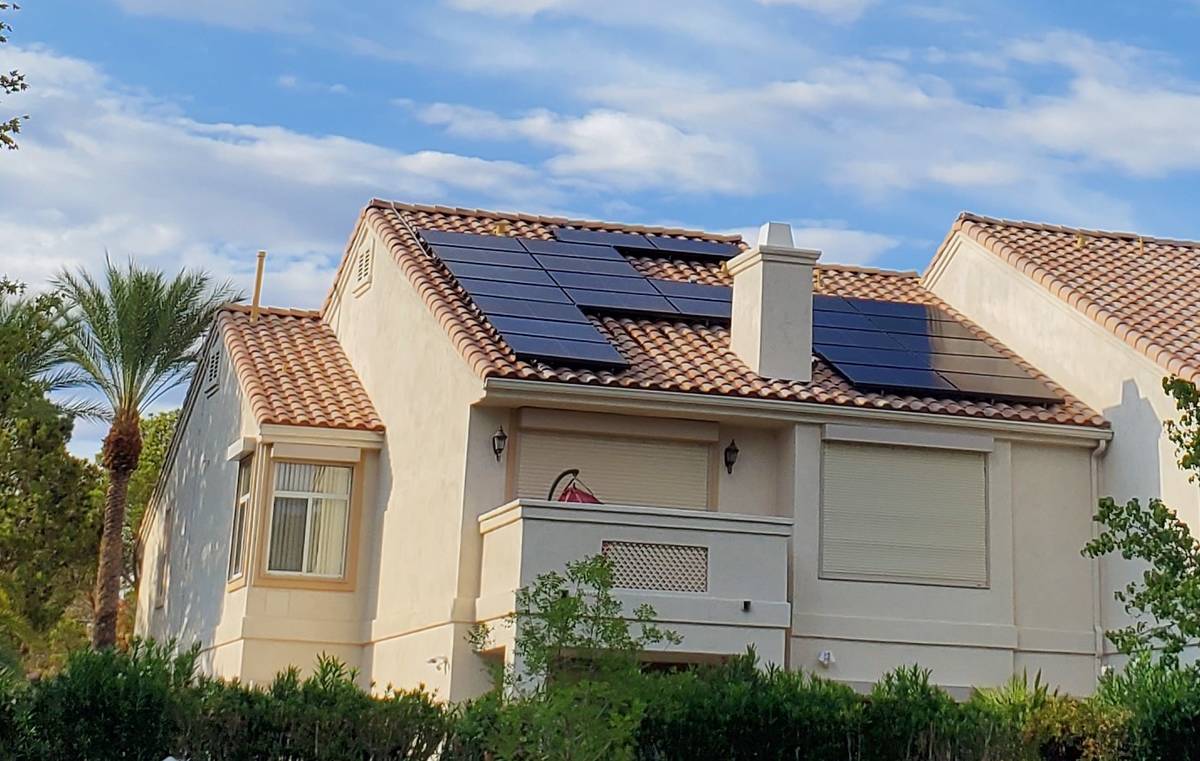 Homeowners who want to harness the power of the sun have a little more than two years to take advantage of the federal investment tax credit before it diminishes and then ends in 2024. (Stan Hanel RJRealEstate.Vegas)

The desert sun shines brightly on the Las Vegas Valley about 300 days out of every year.

How many homes and office buildings in Nevada have installed photovoltaic solar panels to harvest those ambient light waves and convert them into electricity? More than 50,000 homes and businesses, according to NV Energy.

Any homeowners who would like to join this exclusive club have a little more than two years to consider the opportunity before an important federal investment tax credit diminishes and then ends in 2024.

The Energy Policy Act of 2005 established the Investment Tax Credit to encourage the adoption of renewable energy across the country. Currently, residential homeowners can receive a 26 percent credit on their federal tax returns for the installed cost of a photovoltaic solar power system by using IRS form 5695 (Residential Energy Tax Credit). The 26 percent credit will decrease in 2023 to 22 percent and end during 2024 unless the federal government acts to extend it.

Net-metering credits from NV Energy can lower a monthly power bill by returning at least 75 percent of the market value of every excess kilowatt-hour generated by installed solar panels, when used by the NV Energy utility grid.

Technology innovations have lowered the cost of solar panels, inverters, electrical equipment and mounting hardware over the past two decades. The average cost of an installed 6-kilowatt solar power system has fallen dramatically, from approximately $50,000 during 2008 to about $15,000, after federal tax incentives.

NV Energy also offers additional rebates and incentives for the installation of supplemental battery storage systems, which can continue to provide electric power to a home when the sun isn’t shining.

More information about the NV Energy PowerShift programs for residential home owners, including a Rooftop Solar Calculator tool and the net-metering program application procedures, can be found at the utility’s website, nvenergy.com/cleanenergy/solar.

When shopping for a rooftop solar power installation company, homeowners should be wary of sales people and marketing campaigns on social media that use fear of rising utility rates and diminishing federal tax incentives to try to push people too quickly into installation programs and service contract agreements.

An installation estimate should be in writing, and a potential customer should never be pressured to make an immediate decision on a solar panel system or service contract.

Potential customers might take the time to check out a solar panel installer to make sure the company has a legitimate Nevada contractor’s license number that has been registered with the Nevada State Contractors Board. The five-digit license number and the contractor’s integrity can be verified through the NSCB website at nscb.nv.gov.

A transparent listing of a contractor’s past work history is available through this website, including any complaints, infractions or violations. Also on file are the contractor’s company business license in the state and the company’s monetary limit for the work it has been evaluated to do, based on filed financial reports.

The Nevada State Contractors Board is a consumer protection agency that handles more than 15,000 registered licenses for companies in all the construction trades. A Nevada contractor’s license is required to pull permits from local government building departments.

Electrical work on a home solar power system is considered a “life-safety trade” and will require a permit, especially when electrical wiring from a system is connected to the local utility grid.

Shoddy construction or business practices can be addressed by filing a formal complaint with the Contractors Board. The agency can investigate, verify and enforce workmanship violations or infractions up to four years after a rooftop solar system has been installed. Enforcement can entail fines and suspension of a contractor’s license if an investigation verifies a consumer complaint.

When a homeowner uses an unlicensed contractor, any infractions or violations become the responsibility of the homeowner, who may be required to hire a licensed contractor to repair faulty work and bring it back into code or safety compliance.

If fraud was perpetrated by an unlicensed contractor and a complaint is filed with the Contractors Board, there are fewer enforcement tools available other than a criminal lawsuit.

The COVID-19 pandemic of 2020-2021 has been another “bump in the road” for the local rooftop solar power installation industry, forcing job layoffs and causing supply chain problems.

Nationwide, the industry employed 231,000 workers during 2020, down 6.7 percent from 2019, according to a Solar Foundation research study. But employment has been rebounding during 2021 with the rest of the national economy, and the industry is projected to grow as much as 30 percent by the end of 2022.

Many local homebuilder companies have installed pre-wired electrical harnesses and enlarged conduit space to accommodate installations of residential solar power systems within their new communities. But the final decision to install a photovoltaic panel system on a new home has usually been left to the homebuyer as an option.

New homebuyers have an option to either lease the power generated by the solar panels on their rooftop or own the panels and power system outright as part of the overall price of the home.

Under a Sunnova LeasePlus agreement, there are no upfront costs for the solar panel system installation. The homeowner pays a flat monthly fee to Sunnova for the power provided by the panels and maintenance and remote-monitoring services that are included.

For a homeowner who buys the solar power system outright as part of the home cost, Sunnova offers a 20-year installation warranty and a 25-year equipment warranty.

The company provides high-quality and high-performance solar power products from vendors like LG, Hanwha and Enphase. Under either the lease or purchase plans, homeowners also have the option to add an additional battery storage system after the solar panel system is activated to provide backup electric power to a home.

Battery storage solutions from Sunnova include the Tesla Powerwall, Generac PWRcell and Enphase EnCharge. Each battery storage system is covered for up to 25 years through a combination of a manufacturer’s limited warranty and additional coverage from Sunnova.

Other independent solar power installation companies within Nevada have endured the ups and downs of industry growth by developing new business models.

“The lesson we learned was to diversify,” said Louise Helton, president and founder of 1 Sun Solar in Las Vegas. Her solar power company moved away from a reliance on residential solar installations to larger commercial projects that included hospitals and office buildings. 1 Sun Solar enlarged its solar installation project operations beyond Nevada to include bigger markets such as Florida and Texas.

Robco Electric found a diverse mix of residential and commercial projects to continue to sustain itself, locally.

The next decade of the 2020s should bring growth opportunities to the emerging rooftop solar power industry in Nevada despite declining federal government incentives.

Alongside its PowerShift programs, NV Energy plans to expand its electric power grid within the state through a $2.5 billion investment in its new Greenlink Nevada initiative, which was approved by the Public Utilities Commission of Nevada in March.

The utility will be building high-voltage transmission lines during the next decade that will connect more substations across the state into a big inverted triangle that will have one major hub point in Las Vegas.

“Greenlink Nevada is a transmission line initiative that we think is going to transform Nevada’s energy landscape for the decades to come,” said Carolyn Barbash, vice president of transmission development and policy at NV Energy.

Greenlink North will originate from a new Fort Churchill substation in Yerington. The substation will serve as a hub to connect with the Robinson Summit substation in Ely to the east, the Reno/Carson City/Sparks region to the northwest, and the Harry Allen substation in Las Vegas. The Greenlink North transmission line to Ely will provide more electric power infrastructure through the middle of the state over a length of 235 miles, while running parallel to U.S. Highway 50.

Greenlink South will traverse 351 miles from the new Fort Churchill substation in Yerington to the Harry Allen substation northwest of Las Vegas. This transmission line will link the northern and southern parts of the state through its western regions.

The transmission line projects should come online in stages between 2026-2031, although recent state legislation from Senate Bill 448 will be pushing the utility to finish the project by 2028.

The new Greenlink Nevada initiative can build out a more flexible statewide power grid over the next decade. An expanded grid could more effectively combine distributed energy resources like rooftop solar power systems with utility-scale resources in a way that would benefit all Nevada ratepayers within both urban and rural regions of the state.

More information about the Greenlink Nevada transmission line project can be found at the NV Energy website at nvenergy.com/cleanenergy/greenlink.