Skip to content
Sign up for our newsletter
section-ads_high_impact_1
BY BUCK WARGO SPECIAL TO LAS VEGAS BUSINESS PRESS
November 20, 2018 - 9:36 am 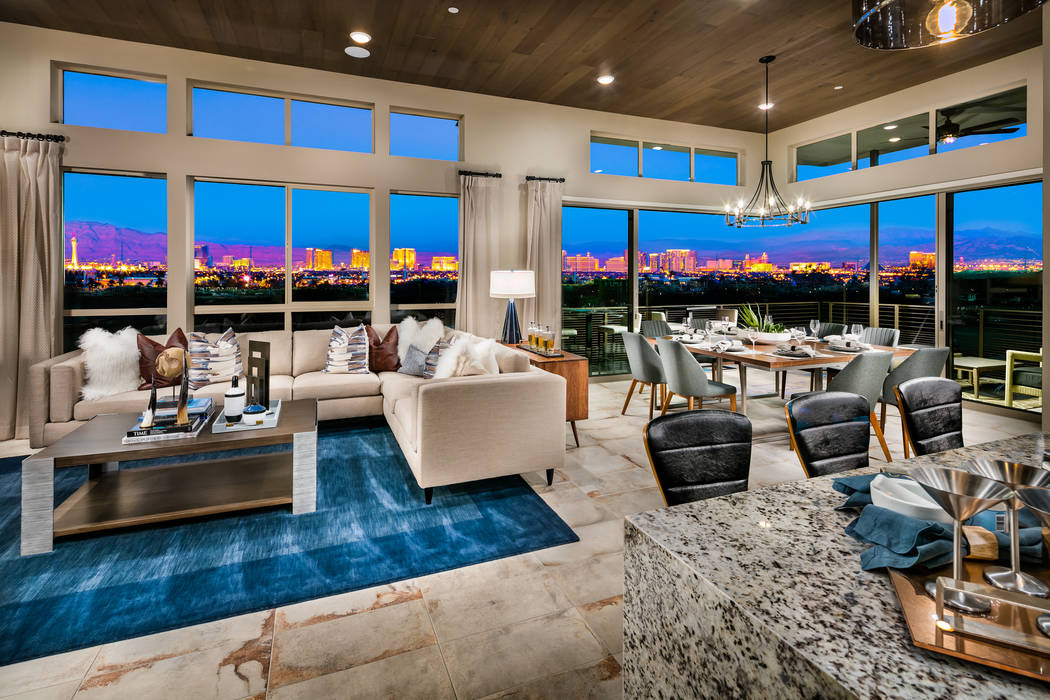 Those on the Inspirational Tour were impressed with Las Vegas' age-qualified communities. This is the Apex model at Shea at Trilogy Summerlin. (Trilogy) 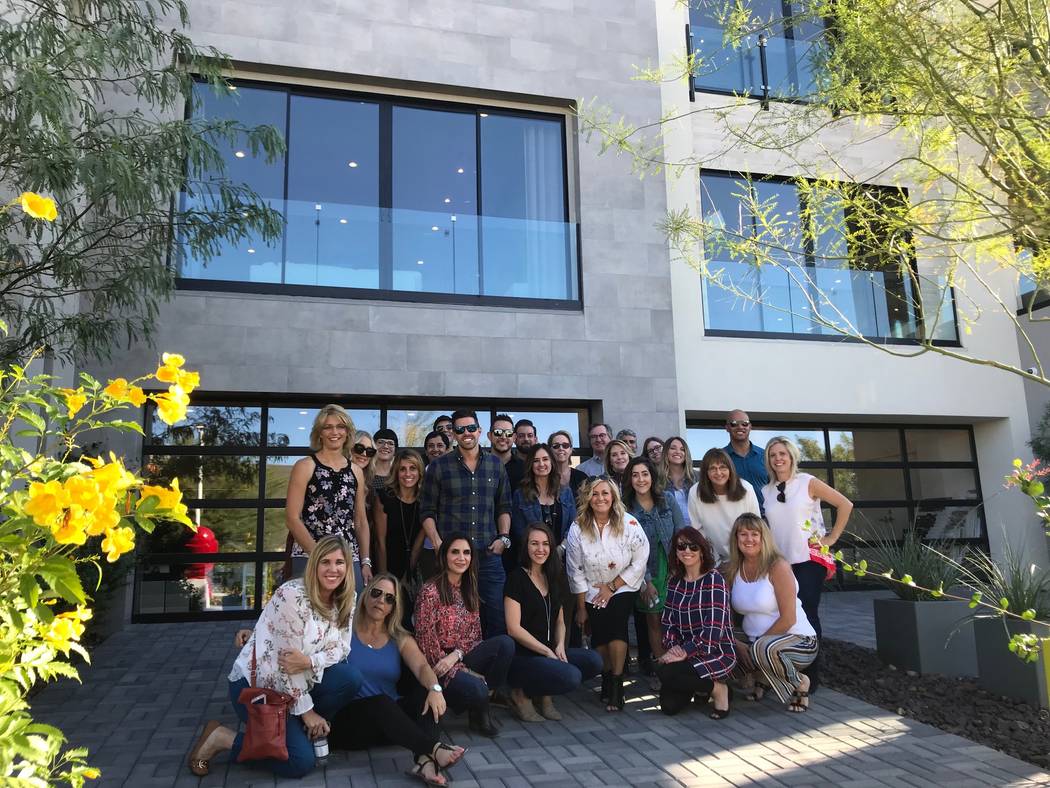 Las Vegas recently hosted more than 30 representatives from homebuilders, interior merchandisers and architects from Southern California and Denver looking at new product from Las Vegas in what was called the Inspirational Tour. (Team PMP) 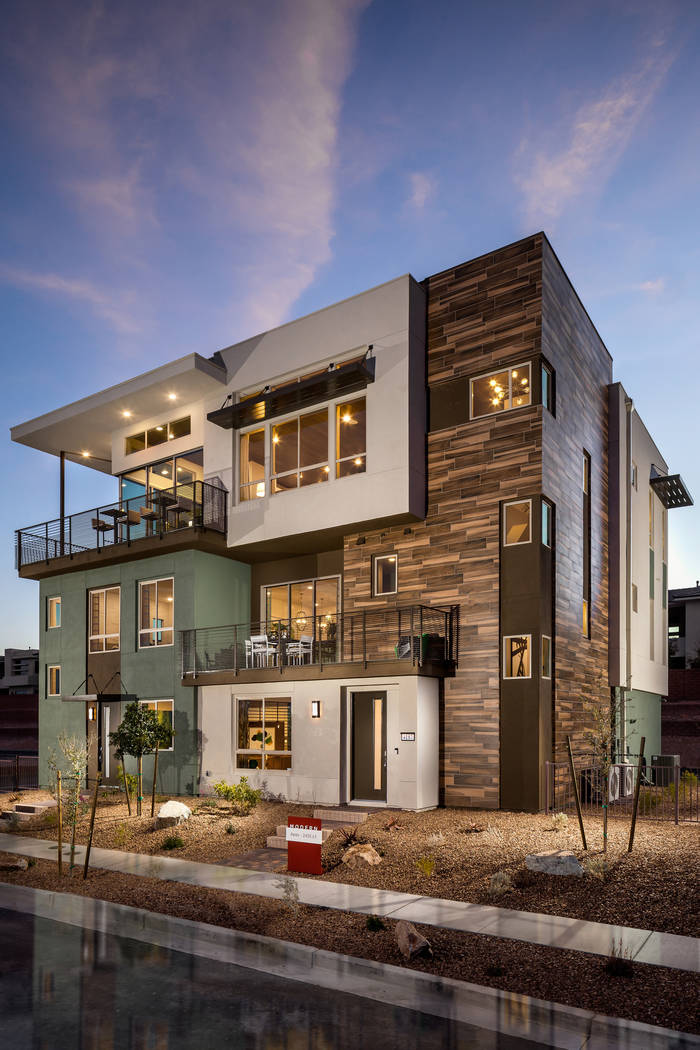 Shea at Trilogy Summerlin, an age-qualified community, was on the Inspirational Tour. (Trilogy) 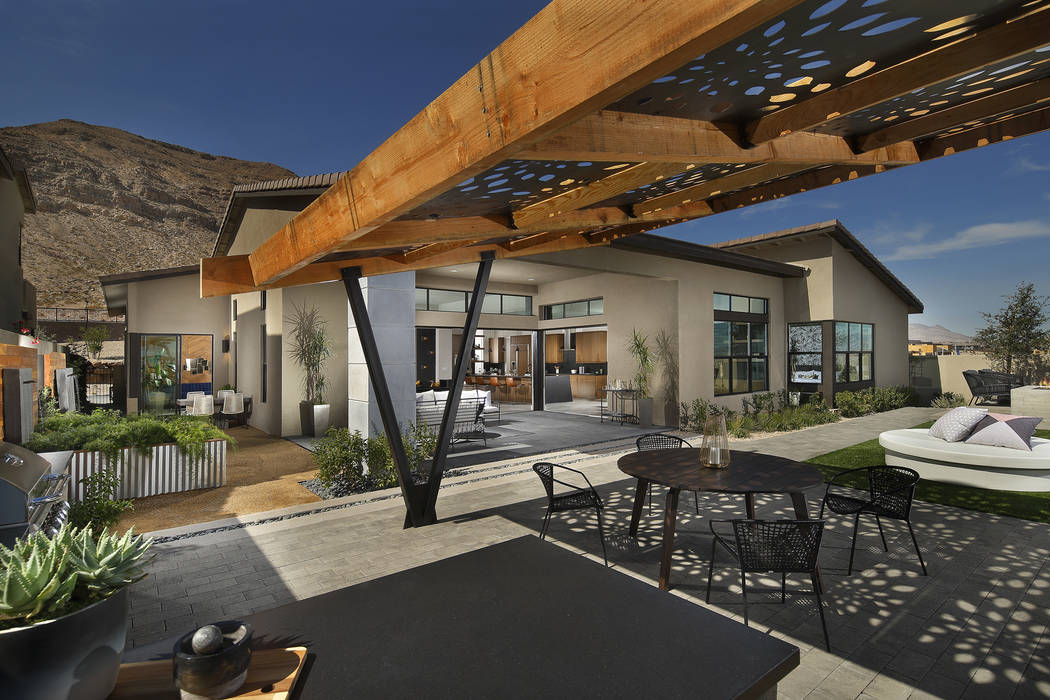 Homes in Nova Ridge in Summerlin have a modern design. (Pardee Homes) 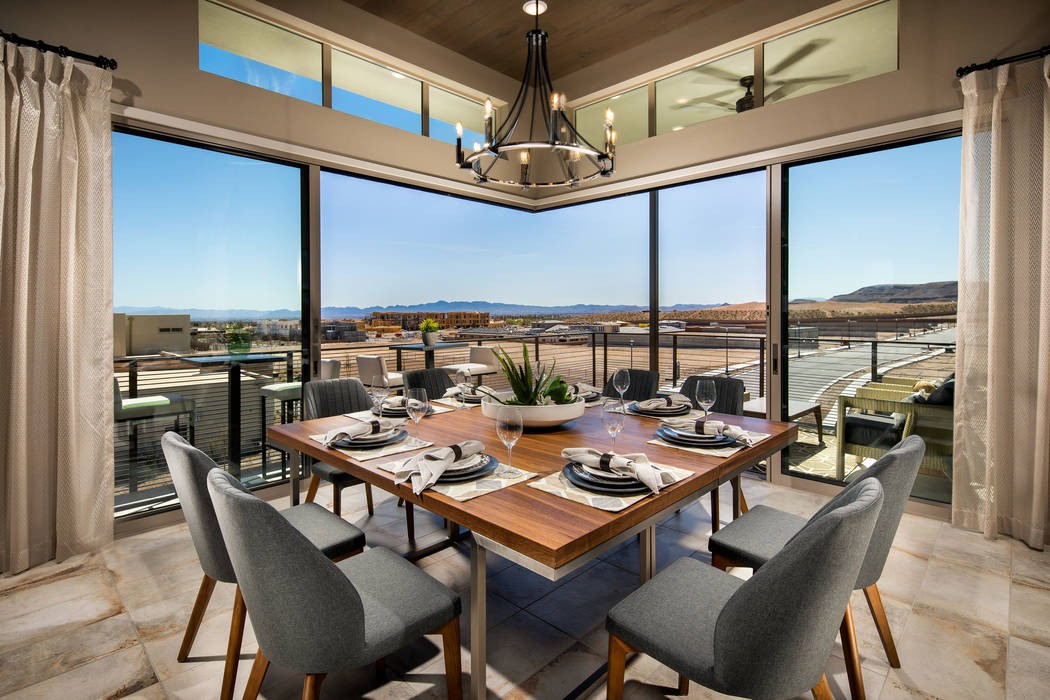 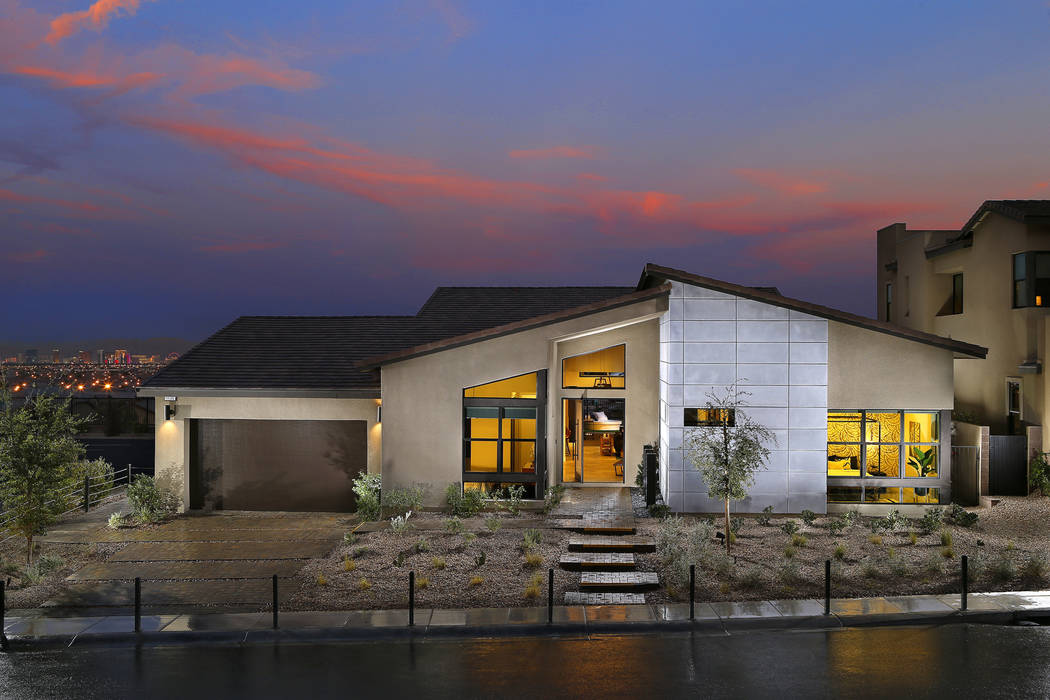 Homebuilder Pardee Homes has been creating a modern look for its product for a few years. Shown is a home at Nova Ridge in Summerlin. (Pardee Homes) 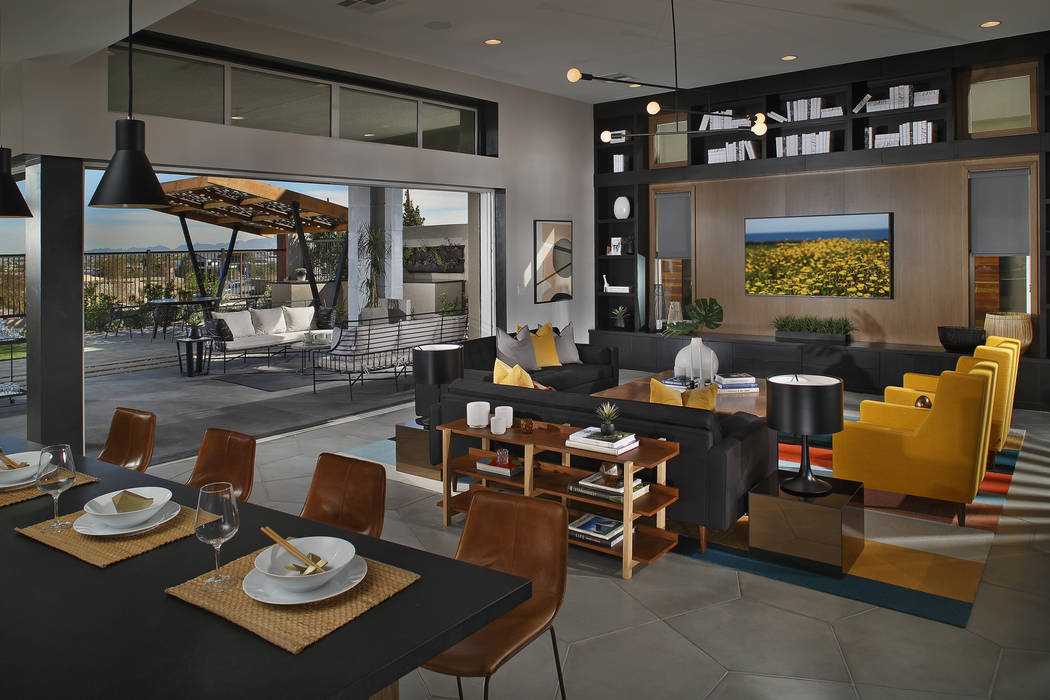 A lot has changed with Las Vegas home design since the rebound of the housing market following the Great Recession, and it’s caught the attention of the building industry in the West.

Las Vegas recently hosted more than 30 representatives from homebuilders, interior merchandisers and architects from Southern California and Denver looking at new product from Las Vegas in what was called the Inspirational Tour.

They left impressed and looking to take what lessons they’ve learned here back to their own markets to replicate.

They’ve saw a variety of award-winning homes and town homes of various price ranges, including luxury production and age-qualified communities.

The members of the Sales & Marketing Councils of Denver and Southern California said they were struck by the contemporary design that has permeated the Tuscan and Mediterranean designs that have long dominated homebuilding in Southern Nevada. The visitors cited the use of windows and doors to create an indoor/outdoor living experience and even the upgraded use of materials from stone and countertops to windows and doors to ceramic tiles that look like wood.

“There’s a lot of cutting-edge designs happening here that haven’t happened in the past,” said Southern California-based Lisa Parrish, chief creative executive with Team PMP, which sponsors home Gold Nugget building awards nationally and organized the Las Vegas tour. “You have great indoor outdoor living because you have the climate for it, and that’s fantastic.”

What’s so impressive, Parrish said, is great contemporary designs that permeate in production homes throughout price ranges of $600,000 and above where in other locales that wouldn’t happen until $1.5 million.

“Contemporary and indoor and outdoor design is reaching every price point,” Parrish said. “It’s no longer just luxury. It’s interesting in how contemporary has taken off here and been embraced. In some markets, it’s still shied away from. They don’t want to be pioneers.”

Nat Hodgson, CEO of the Southern Nevada Home Builders Association, said as Las Vegas recovered from the economic downturn that collapsed the housing market a decade ago, builders realized that they had to do something different to separate from homes built in the 2000s that were on the resale market.

“You have to do something to set yourself apart, and I know our designs that the builders have done in the last four years — there were only couple of builders doing the contemporary. Now, just about all of them are building contemporary never-seen-type designs that you saw (in luxury custom homes) where they are applying them now to production homes.”

Hodgson said unlike California, Las Vegas doesn’t have millions of homes that has saturated the market, and that makes it easier to change.

San Diego-based Ken Perlman, a principal with John Burn Real Estate Consulting, spoke with the group when they visited Las Vegas. Perlman echoed that by saying Denver and Southern California are more mature markets while Las Vegas is “still early in the cycle,” in its development and is evolving.

The group met at Regency at Summerlin and the visitors spoke highly of the active-adult communities for those 55 and older that they saw on their tour.

“Las Vegas is as advanced as any market when it comes to active-adult space,” Perlman said. “They’ve been doing it a long time, and other markets haven’t had as much built.”

That was collaborated by some of the homebuilder executives in Denver who said there’s limited active-adult building there. What they saw in Las Vegas was beyond just having a clubhouse but homes with an edgier design, greater privacy, nice street appeal and walkability. They mentioned some active-adult communities in Denver have higher density and are more conservative ranch-style homes compared to what’s available in Las Vegas where outdoor living is embraced.

Southern California executives talked how Las Vegas has embraced contemporary design on a widespread basis whereas in their region there are only pockets of it. They talked about the use of higher-end materials, appealing gates and windows and doors that pivot open. They also talked about the desert-style landscaping being at a higher level.

“It’s a great opportunity for people in our industry to get to see products and ideas that we may not have in our own market,” said Alisa Poncher, director of training and implementation for William Lyon Homes in Denver. “It’s very innovative here, modern and fresh. I would not have expected to see what we saw, but it was definitely cutting-edge product here. And I loved the active-adult. In addition, I wasn’t aware that there was so much high-end luxury product in Las Vegas.”

Dottie Sweeney is Toll Brothers’ assistant vice president of market for the Western Region that covers areas from Seattle and Boise in the northwest to Las Vegas and Arizona in the southwest to Colorado in the east, said it was great for the group to see some of the new trends of Las Vegas builders and specifically cited the materials.

“We saw the use of tile and use of flooring, and windows that open up and make the indoor-outdoor living wonderful,” Sweeney said. “Even the finishes on the countertop are high-end and clean and easy to maintain. A few years ago, things were so ornate and not attainable, and this is very classy. I learn from every market, and it’s nice to see Vegas has a lot to offer. It’s more modern than you expect, and a lot more trends picking up here than anywhere else in the country. It’s definitely an attraction.”

Tyler Jones, owner of luxury Blue Heron with its modernistic designs, said the tour is a sign that Las Vegas is maturing and becoming more sophisticated. Southern Nevada has typically followed the trend of Southern California with Tuscan and Mediterranean styles, but that has flipped in the last five years.

Jones likes to use water, lighting, fire as important design elements that he said fits the energy of Las Vegas.

“I think California is trailing and looking back this way to see what is going on,” Jones said. “We’re driving and pushing innovation, and there’s a lot of momentum going on right now.”

“We’re growing up and have finally matured,” Mayo said. “There’s an excitement and success story that has happened in Las Vegas since the downturn.” Mayo pointed to his own active-adult community, Regency at Summerlin, where the homebuilder executives gathered for an overview on the Las Vegas housing market. Going with all contemporary architecture was “out of the norm for us” and something builders are reluctant to do without including Tuscan, Mediterranean and Spanish Colonial.

“We stepped out of the box and forced buyers to face three or four different styles of contemporary architecture,” Mayo said. “It was a little nerve-wracking in the beginning, but it has been very well-received. There’s a quality and permanent nature of the architecture we designed.”

Homes measure 1,700 square feet to 2,200 square feet in one-story with an emphasis on indoor and outdoor living, he said. It has expansive areas of glass and private side courtyards.

“It has big open spaces and more of a minimalist approach than a lot of small cut-up rooms,” Mayo said. “It has rooms with dual functions. It was a bit of a gamble because people in this product range typically have been in a house 10, 20, 30 or 40 years and have amassed a lot of things, and they’re reluctant to downsize. We have achieved a design that lives really comfortably, and it’s extremely successful.”