Skip to content
Sign up for our newsletter
section-ads_high_impact_1
BY BUCK WARGO LAS VEGAS BUSINESS PRESS
January 19, 2021 - 8:30 am 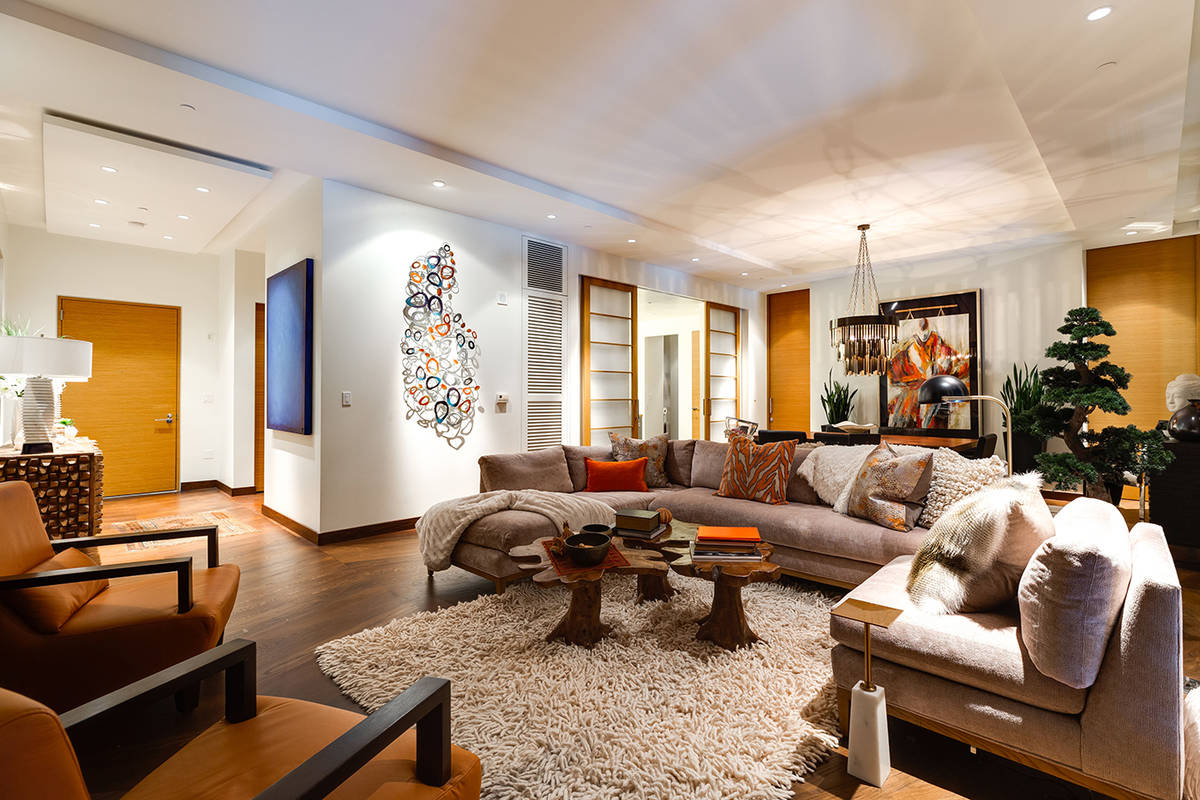 The highest-priced penthouse of 2020 was in the Waldorf Astoria on the Las Vegas Strip. It sold for $4.5 million. (BHHS Nevada) 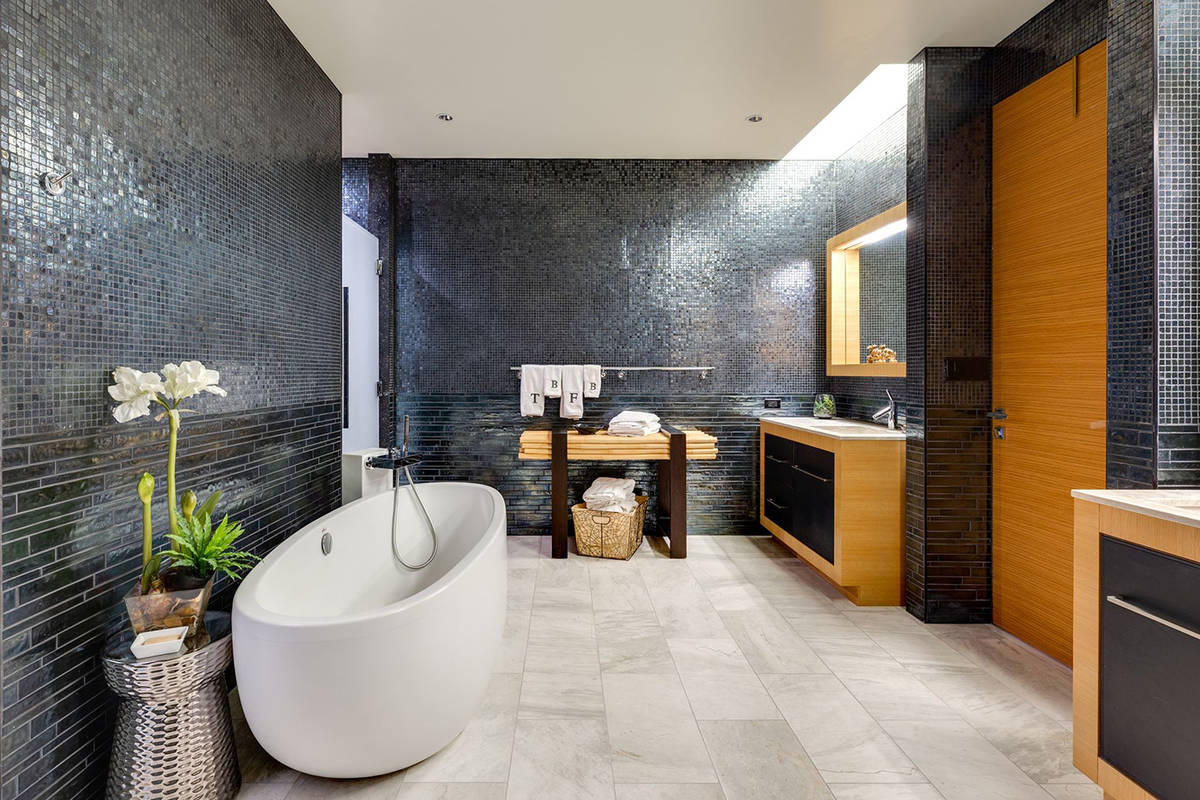 The Waldorf Astoria penthouse in the CityCenter on the Las Vegas Strip features dual master bedrooms, each with a master bath. (BHHS Nevada) 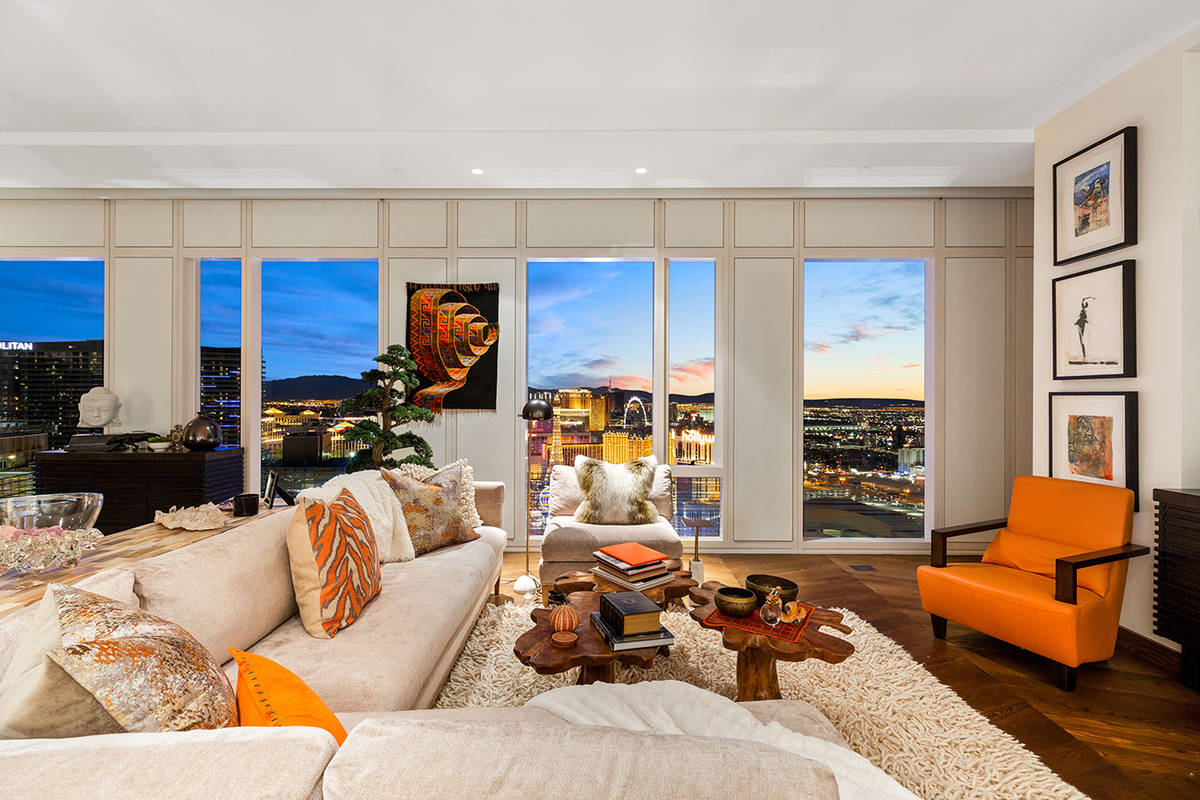 The Waldorf Astoria penthouse has sweeping views of the North Las Vegas Strip and the entire Las Vegas Valley and mountains. (BHHS Nevada) 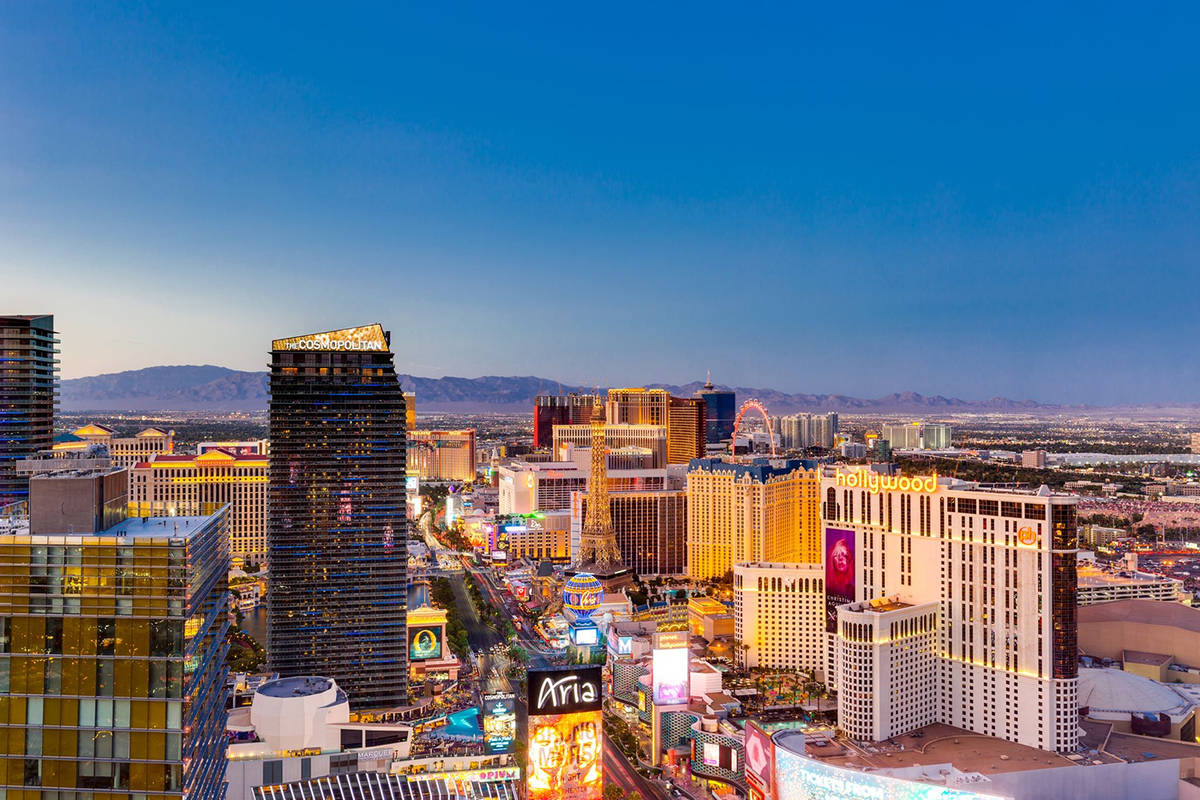 The Waldorf Astoria penthouse has views of the North Las Vegas Strip and panoramic views of the entire valley and mountains. (BHHS Nevada) 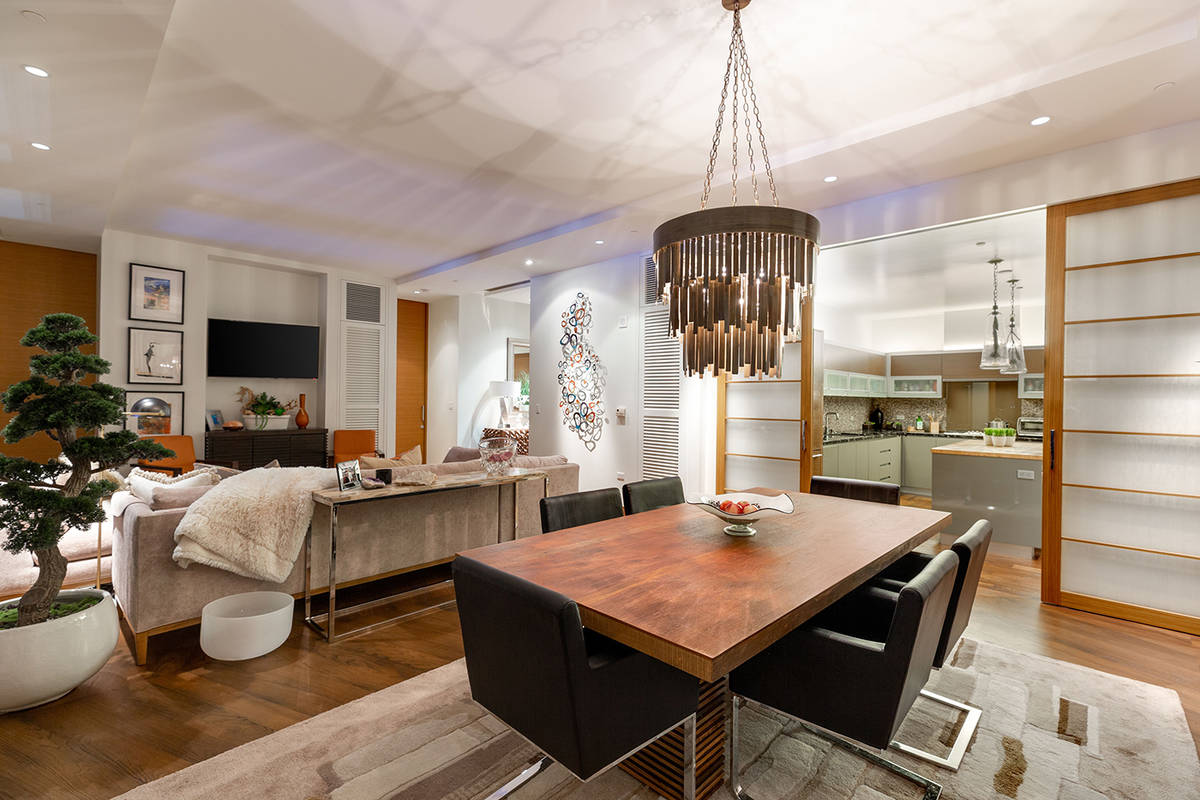 BHHS Nevada The 2,756-square-foot Waldorf Astoria penthouse has its kitchen and dining area near the large open living room. 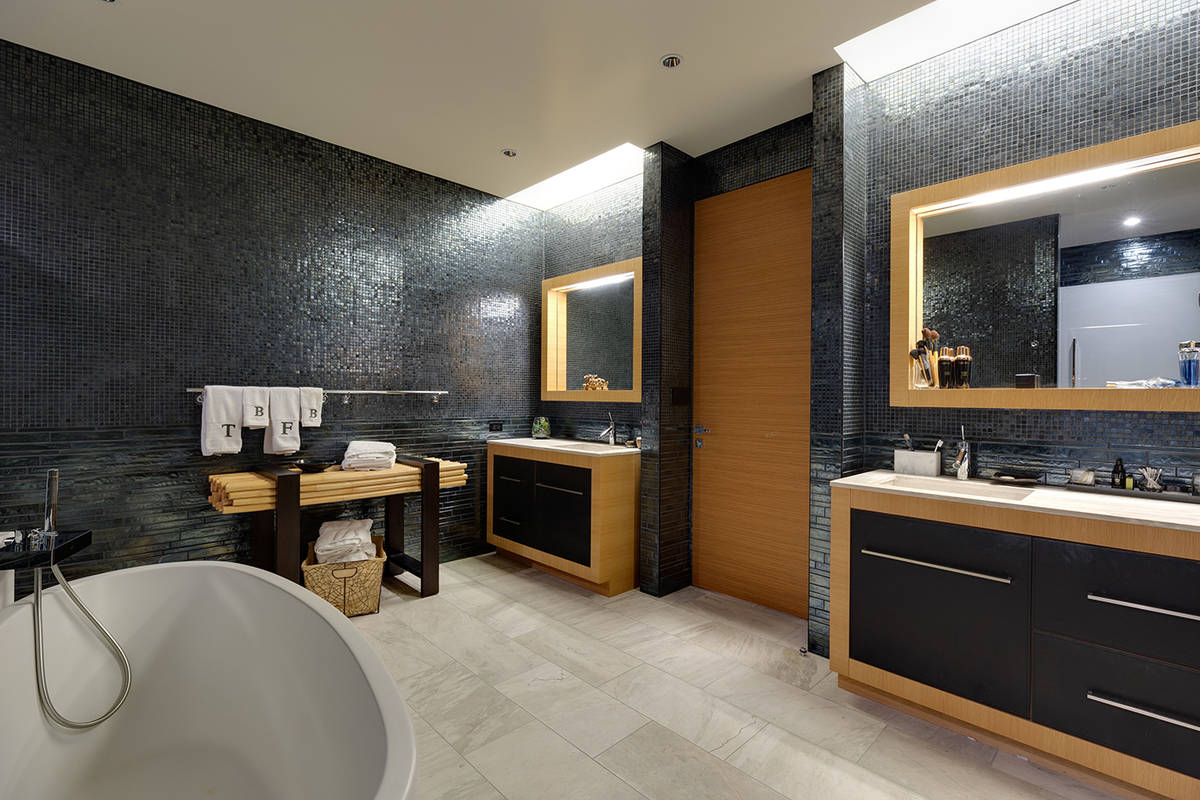 One of 2.5 baths in the Waldorf Astoria penthouse. (BHHS Nevada)

A penthouse at the Waldorf Astoria set the record in 2020 as the highest-selling condo in Las Vegas with a price tag of $4.5 million.

The December sale was a bright spot in an otherwise dismal year for the luxury condominium market that unlike luxury homes took a hit because of COVID-19, according to Realtors. Rob Jensen of the Rob Jensen Co. reports that there were 50 high-rise sales of $1 million or more in 2020, down 20.6 percent from 63 in 2019.

The top sale of the year was a penthouse unit on the 43rd floor of the Waldorf Astoria, which has a condo tower on the upper portion of the building and hotel on the lower level at CityCenter.

It’s described as modern design meets Zen. It features dual master bedrooms and a large open great room, according to Frank Napoli, a Realtor with Berkshire Hathaway HomeServices who was the listing agent and buyer’s agent.

“It has an incredible north Strip view,” Napoli said. “Not only is it on a high floor in the building but situated on the most popular view corridors in the building. It provides a completely unobstructed view looking right up at the most sought-after and beautiful part of the Las Vegas Strip. It looks over the neighboring tower and buildings. At night the view is spectacular and during the day it has a panoramic view of the entire valley and mountains.”

Napoli called the floor plan spacious and open, and one of the few units in the building where there is a great-room feel. The dual master suites are on the opposite end of each other, and the den is great for an office, movie theater and workout room, he added.

The seller was Hollywood producer and filmmaker Brenda Markstein. The buyers were Peter Koehler and Kory Rydberg who earlier this year sold a unit at the Waldorf Astoria for $2.65 million, according to Clark County property records.

“The high-rise market has definitely had its challenges for 2020 whereas the single-family residential market has done quite well,” Napoli said. “I own in the (Waldorf Astoria). What I have noticed that has contributed a decline in sales numbers (in high-rises) is the pandemic. Buildings have been forced to shut down amenities and certain operations and limit use of amenities. That played a part in the decline of high-rise sales and, of course, our neighborhood, which is the Las Vegas Strip, and all of the amenities we enjoy there such as dining, entertainment and sports. These pandemic restrictions affected the use of our extended community outside of the building.”

At the Waldorf Astoria, for example, restaurants, room service, gym and other amenities that serve the hotel and condo units were limited or shut down.

What also has hurt sales, Napoli added, is limitations in travel.

“Most people come here for the entire package to dine, go to a show and sporting event and to gamble,” Napoli said. “That entire experience is limited right now so I don’t think we’re drawing the same clientele as we used to, that is a high-rise buyer.”

Napoli said he’s glad the year ended strong for him. Besides the $4.5 million sale, he represented the buyer for a unit next to it for $3.65 million in November. Those were the two highest sales in the Waldorf Astoria in 2020, he said.

“In this climate, it shows the strength and desirability of the Waldorf Astoria and the amenities and type of clientele this building attracts,” Napoli said. “The building is resilient and highly sought after, and I expect better performance as we get back to normal operations in the building and on the Las Vegas Strip.”

Any rebound in the high-rise market in 2021 depends on COVID-19 and how quickly the city gets back to normal operations, Napoli said. It’s the out-of-state buyer that has a home in another state and wants to establish residency in Las Vegas or someone who wants a great experience when they visit because they want to live like they’re on vacation, he said.

“I can imagine that once we start bringing these types of prospects back to Vegas that the high-rise market will take off again,” Napoli said. “Prior to the pandemic, there was a lot more consistency in sales and higher numbers. I don’t think the market for high-rises is dead at all, and I think it’s only going to get better in 2021.”

Jensen said it’s clear in 2020 that high-rise buyers were looking to avoid buying high-density places with elevators and common areas and wanted their own space in luxury homes during the coronavirus pandemic. But as sales are depressed and some prices are coming down, that means there will be an opportunity for those looking to buy in 2021, he said.

“It’s a softer market which means there are opportunities for buyers looking to take advantage of it in these conditions,” Jensen said. “It’s not going to be like this forever. This high-rise product is so expensive to build and probably a long ways away for Vegas.”

But that recovery could take longer than 2021 as the vaccine is just starting to get rolled out to the nation.

Mahsheed Barghisavar, broker, owner of Mahsheed Real Estate who lives at Panorama Towers, said she saw a lot of people move out of high-rises in 2020 because of the coronavirus. When people are locked down in a high-rise “with no backyard, pool and no nature you start going a little stir crazy,” she said. Besides amenities being shut down, some high-rises aren’t even allowing deliveries, she said.

“That’s made it difficult to sell because everyone wants a home, and even I want a home right now,” Barghisavar said. “I do think the high-rise value will go down a little bit. There are some desperate owners. I have a doctor and he’s about to get laid off, and he’s going to lower his price below market value of his $900,000 unit (to $849,000 and probably to $825,000). Those units (priced) at more than $1 million may need to come down $150,000 to $200,000 to get it to move. If you are in Waldorf of Veer Towers you have a better chance of it moving. But it may take until 2022 to come back because all of the energy right now is toward homes and yards.”

The previous No. 1 sale of the year was reported by Real Estate Millions in July when Las Vegas philanthropist Karin Sporn sold her condo at One Queensridge Place for $4 million. It measures 5,100 square feet with four bedrooms.

Randy Char, broker and president of Char Luxury Real Estate, pointed out that all high-rises aren’t the same. One Queensridge Place, for example, has a direct elevator and private parking area.

“It has 16 elevators so you can distribute the traffic versus other places,” Char said. “They live more like homes.”

The luxury high-rise market “won’t be like this forever” because most buyers live out of town and don’t have to move, Char said.

“It’s a discretionary purchase, and there’s no urgency for them to travel to Las Vegas to buy a unit,” Char said. “I think when we normalize, amenities will open up, travel becomes easier and people will come back and buy more high-rise units when Vegas comes back,” Char said. “That’s the silver lining.”