Skip to content
Sign up for our newsletter
section-ads_high_impact_1
By Craig A. Ruark Special to the Las Vegas Business Press
October 18, 2015 - 3:03 pm 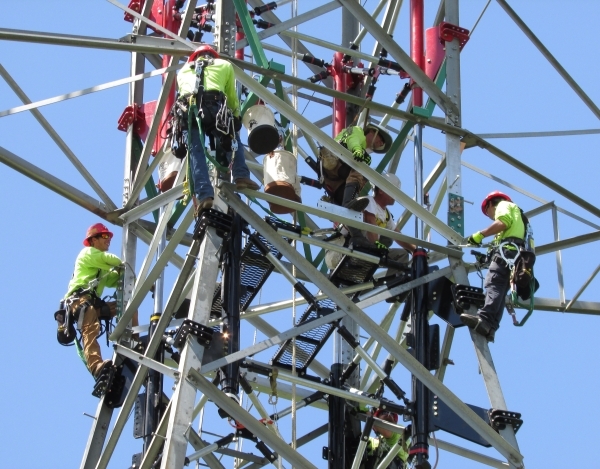 An Ampjack America crew works on raising the height of a power transmission tower without a crane and without disrupting service. (Courtesy, Ampjack America) Undated, October, 2015

Imagine working on a steel tower, 75 to 100 feet in the air, with only your skill and a safety harness protecting you from falling. If that doesn’t sound dangerous enough, imagine up to 500,000 volts of electricity pulsing through wires only a few feet from your body.

That is the environment Ampjack America workers face each day in the field.

Ampjact America is the U.S. subsidiary of a Canadian company with its U.S. headquarters in the Howard Hughes Center on Flamingo Road. Recently, the company received a $1.3 million contract to raise the height of 15 high-voltage power line towers in North Dakota. This is the first of four contracts that will include an additional 20 towers that distribute power into South Dakota. The company is also working on engineering designs for four additional projects that will raise the heights of 45 to 50 towers in the U.S.

Ampjact is the only company with patented tower-jacking technology that allows a crew to unbolt the top section of a high voltage transmission tower — with the live transmission lines still attached — and raise that section an additional 15 feet.

It’s a tough task against thousands of pounds of downward pressure. Once the top section is raised, the crew will install a new 15-foot permanent support section onto the tower. This type of work used to be performed with a crane, but that required a larger construction footprint in what is often a very narrow or environmentally sensitive area. It also meant cutting power to that section of the line during the course of the work.

The design of this tower-jacking equipment took several years to perfect, according to Luke Chaput, president of Ampjack. “It took a lot of R&D (research and development), experimenting with various designs, and a few setbacks along the way,” said Chaput.

When it came time to expand the service to the U.S., “Las Vegas was the logical choice,” explained Chaput. “The corporate tax structure offered by the State of Nevada along with the amount of direct flights to and from McCarran Airport makes Las Vegas a great place to do business.”

While the Las Vegas office is small, the company does employ, on a contract basis, between 10 and 20 highly skilled linemen who travel to job sites under the project management of Ampjack. All of the money for the U. S. contracts and the payroll passes through a bank in Las Vegas.

The reason that the towers need raised is to comply with regulations governing the distance between the ground or other objects and the lowest point of the transmission line between the poles. With the increasing need for additional power, many power companies are having to increase the amount of power running through the power lines. That increase in power causes an increase in the amount of heat produced which in turn causes the line to stretch and sag lower than is allowed.

In addition to raising towers, Ampjack also engineers and designs new towers and specializes in tower restoration and failure mitigation. Its website is www.ampjack.ca.