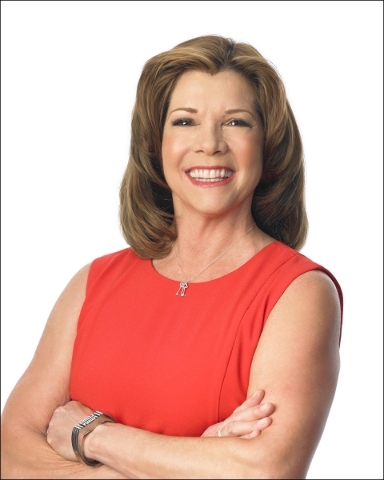 Sales executive Linda Bonnici will be honored with a lifetime achievement award from the Nevada Broadcasters Association at its gala Aug. 15. (Courtesy)

Two days after Linda Bonnici moved to Las Vegas from Westland, Mich., she landed a job as a front desk receptionist for Broadcast Associates, KFM/KVEG, in 1977.

“I had two job offers; one working in the office of a construction company and one as a receptionist at a radio station. Being 20-years-old, a radio station sounded more fun,” Bonnici said. “From that moment I learned the industry and found that I was good at talking to people.”

She went on to become an account executive at the radio station before transitioning into the same role for Sunbelt Communications, the parent company of KVBC-TV Channel 3. She was promoted to local sales manager and moved on to the same role for Landmark Media Enterprises, also known as KLAS-TV Channel 8, or 8 News Now. There, she moved up the ranks to general sales manager before retiring in June as vice president of sales.

She’ll culminate her experience with a Lifetime Achievement Award, which will be presented to her Aug. 15 by the Nevada Broadcasters Association at its 20th annual Hall of Fame Gala at the Four Seasons Hotel.

Q. What sparked your passion for the broadcast industry?

A. I really loved having the ability to come up with a marketing plan for a company and seeing their business grow through the help that I was able to provide. It was really rewarding to see someone’s business change and know that you had a part in it. Whether it was a small business or huge car dealership or department store, regardless of size, you knew you played a role in increasing the amount of customers. Seeing people’s businesses succeed was the driving force.

Q. How would you describe your experience in the industry?

A. It was quite interesting. I didn’t start selling advertisements until 1980, and there were very few women in the industry. I looked different from everyone else walking through the door, which gave me a unique opportunity. A lot of businesses were used to seeing men and to be a woman was an advantage. There were a lot of men making these decisions, and there were many times that people didn’t think I knew what I was talking about and that I couldn’t make the deal. I can’t tell you how many times a man said to me, “Well, sweetie, this looks great so bring your boss by and we’ll make a deal.”

During that time, a lot of our customers weren’t ready for females to be decision makers. Over time, I was able to form trusting relationships and it didn’t matter that I was a young female.

Q. How did you help pave the way for other women in the industry?

A. I met with other women in the business and together we recognized that we didn’t have any leaders ahead of us so we said we should form a group that would allow us to learn to manage and be leaders. We formed Women in Communications, which is one of the things I’m most proud of. It allowed other women to have a place once a month to learn and not feel like they were stupid for asking questions. We brought in speakers who taught us how to be managers and do things good leaders do as well as speakers from big businesses. I really I think it helped me grow because it was one of the opportunities for me to be a leader in that group and helped bring more women into the media business.

Q. In your opinion, what are the overall effects of ownership changes for a broadcast network?

A. I’ve seen it happen in radio over the years; where family-owned companies were gobbled up by public broadcasting companies. I’ve watched how they changed. They became different in personality and their process and policies. It’s a totally different environment going from family-run business feel to publicly traded corporation. Everything is much more formulized.

Q. Do you anticipate a drift away from broadcast at some point in the future?

A. Like all mediums, it will go through an evolution of change. Digital is very much a part of all of our lives and that’s what I believe will happen to television, to radio; they’ll add digital in to be more diverse instead of just being one specific delivery system. Who knows what will happen with networks and if they’ll continue to need affiliates. I think it will depend on how strongly they feel they’re distributing their signals. They’re businesses, and they’ll do whatever is most profitable. On the television side, being a local conduit of news and programming is something that the community wants.

Having a great network is icing on the cake and things would change drastically if there was no network. It would become survival of the fittest and we wouldn’t have five and six news stations, we’d have two or three. At some point, you can’t have that big of an expense without a large enough revenue stream to support it. It has to change, evolve and survive, and they’ll do anything to make sure that they do.

Q. Do you anticipate that spectrum sales will have a major impact in Nevada?

A. I’m surprised how slow it’s evolved across the country. I think it’s something we thought people would jump in right away and that hasn’t occurred. It’s been more of a wait and see game. I don’t think cellular companies have been as aggressive locally. They’ve made a few huge national deals but it’s not as high of a priority as we originally thought. Some folks might do that when they feel they’ve settled out and figured out how much they need. It’s in a wait and see mode for now.

Q. What does it mean to you to be honored by the Nevada Broadcasters Association?

A. I can’t believe they chose me. I’ve certainly been in broadcasting awhile but don’t feel like I’m old enough to earn a lifetime achievement. I feel like I’ve definitely put my heart and soul into the business and made some impact but it seems too soon for it to occur. I’m grateful and happy to accept it, though.

Q. What does the future have in store for you?

A. Right now I’ve had many conversations and job offers but I’ve told everyone the same thing — it’s the first time in my life that I haven’t worked, so I’m going to take full advantage of it. I’m not doing anything for the rest of the year other than travel and do things I’ve always wanted to do more of. After the first of the year, if I feel like I need something more or something that that speaks to me, then I’ll get involved. For now, I’m thrilled about my future and what’s to come.