Skip to content
Sign up for our newsletter
section-ads_high_impact_1
By Valerie Putnam Special to the Las Vegas Business Press
July 24, 2015 - 12:06 pm 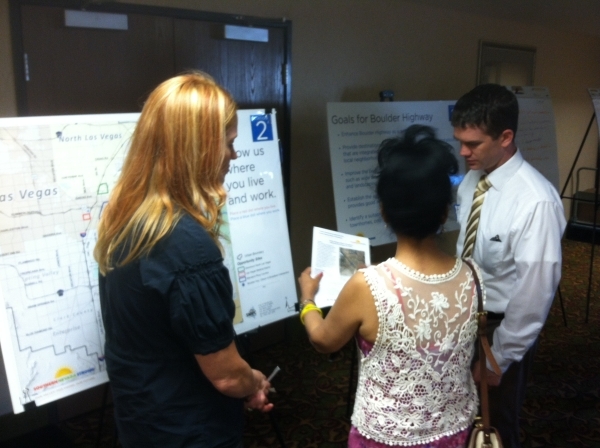 The painful Great Recession has become a catalyst for change in the Las Vegas Valley.

Using a $3.5 million federal grant, the city of Henderson took the lead on a regional planning project, Southern Nevada Strong. The project is this yearâs Green Award winner in the innovation category.

“I don’t think anyone wants to experience the recession in the same way we did in 2008,” said Stephanie Garcia-Vause, Henderson’s director of community development and services and director of the Southern Nevada Strong project. “We were ill-prepared.”

Southern Nevada Strong is the first federally recognized regional plan for the area that integrates developing quality jobs while offering a range of housing options near transportation.

Before the recession, the region’s rapid rates of population growth caused uncoordinated growth around the region.

Throughout the project, residents emphasized two priorities for the region: high-quality public education and well-paying jobs.

“Are we creating the right places in our community for the right employers?” Garcia-Vause said. “If we are able to attract more jobs, we can build a sustainable future, and we wonât experience the recession we did in 2008.”

The project provides a roadmap to diversify the regional economy and improve Southern Nevada’s quality of life by using a development approach that incorporates infill development, transit-oriented development, revitalization of downtown districts, re-purposing underutilized retail and industrial land along key corridors and creation of a variety of quality housing options for all income levels.

The strategies in turn will support education by improving the environment around the schools.

Henderson — on behalf of the Southern Nevada Regional Planning Coalition — has been the coordinator and received the $3.5 million Sustainable Communities Planning Grant from the U.S. Department of Housing and Urban Development.

The valley was one of 30 regions receiving grant funding from the Partnership for Sustainable Communities Initiative, an interagency partnership of HUD, Department of Transportation and the U.S. Environmental Protection Agency.

At the time, the coalition did not have the staff resources to take on the project. Henderson stepped up and offered its resources. Henderson’s Long Range Planning Division in the Community Development & Services Department managed the project.

“Our mayor and council recognized the importance of a regional plan,” said Garcia-Vause, who was given authority to hire six temporary employees. “They were willing to have their staff take the lead when no one else stepped up to the plate.”

Henderson also devoted $400,000 worth of time to the project.

Over the the past three years, the city worked with representatives from more than 150 local governments and agencies throughout the valley.

“The biggest innovation of SNS is the collaboration of all the various parts,” said Cass Palmer, chair of the SNS Community Engagement & Equity Task Group. “Nothing to this extent has ever been done before.”

“Our residents live regional lives,” said Debra March, Henderson mayor pro tem and chair of the Southern Nevada Strong Consortium Committee. “And when we plan across the region, whether its land use, housing, education, job creation or transportation we are more effective and meet the needs of our community individually and collectively.”

Getting more than 70,000 resident responses, the outreach data collected helped identify the four opportunity sites used in the plan as well as the two main priorities residents want to see improved: education and jobs.

The Southern Nevada Strong plan was unanimously adopted by SNRPC and each of the local jurisdictions. The Regional Transportation Commission, the federally designated Metropolitan Planning Organization for Southern Nevada, was selected to administer the implementation of SNS.

Early in July, the EPA accepted the plan. That federal designation allows Southern Nevada to be more competitive for future federal funding.

“This is a living product that is wonderful,” Palmer said. “Something the entire community can be proud of.”