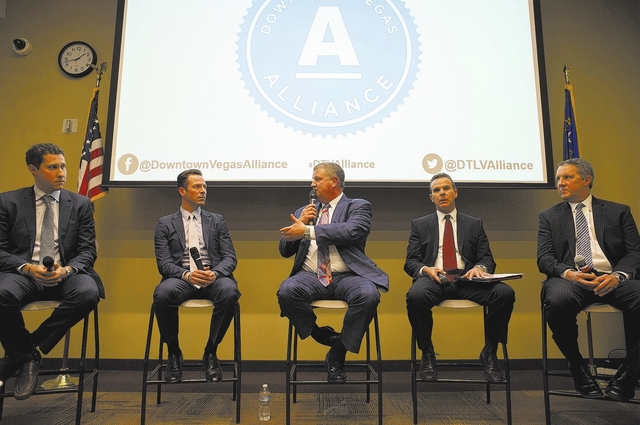 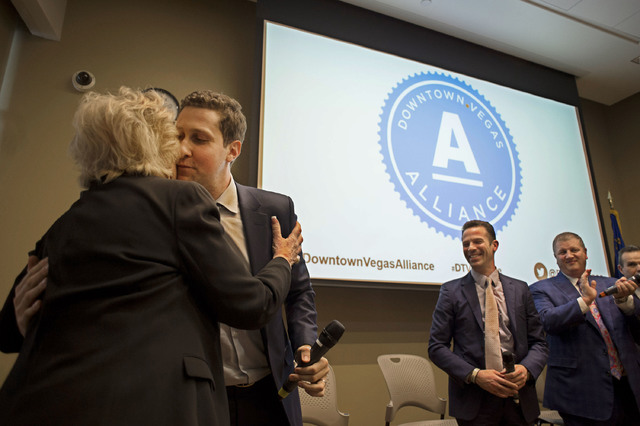 Several of downtown Las Vegas’ most powerful authors of development and the glitz and glam spoke at a panel about their visions for what’s to come and what they’d like to see in the region in the coming years.

At the Molasky Corporate Center at 101 N. City Parkway on Feb. 2, five well-known names in the casino industry sat in front of an audience filled with policy makers and reporters: Derek Stevens, owner of the D, Golden Gate and other property in the region; Jim Sullivan, vice president and general manager of the Fremont, owned by Boyd Gaming; Seth Schorr, chairman of Downtown Grand; Joe Woody, chief financial officer of the El Cortez; and Jonathan Jossel, CEO of Plaza Las Vegas.

Patrick Hughes, president and CEO of the Fremont Street Experience and Slotzilla, moderated the event and opened it with a positive fact: Downtown experienced a 4 percent growth in gaming revenue, while Clark County collectively increased its revenue by 1 percent.

According to the Nevada Gaming Control Board, the exact figure was 4.2 percent, or $564.6 million.

Many on the panel agreed that reinvestment from players such as Tony Hsieh and the city’s leadership was a consistent force that brought the region back to this point.

Nongaming revenue is also an important facet for the region.

“Investing in our nongaming amenities keeps our current customer base and also expands us to a new customer,” Sullivan said.

Sullivan said the California Hotel just went through renovations of its restaurants and sports book and has been moving toward nongaming attributes since the 1970s — noting The Filament Bar.

Stevens said his Downtown Las Vegas Events Center is also an important piece to bringing in nongaming revenue and new crowds. The center holds concerts and food festivals. Stevens pointed to a new event that was going to bring a “headbangers” festival, which will draw a minimum of 15,000 to the region.

“We’re just trying to bring more and more people down,” Stevens said. “I realize there’s going to be some growth in nongaming, but I’m interested in growing both sides.”

This was also the sentiment of Sullivan, who said the gaming was linked to nongaming attributes. This has pushed the group to expand its convention center space.

Schorr added that the Grand is also very active on the e-sports element and wagering on skill-based gaming.

The adding of amenities to downtown benefits all the operators in the region, according to Schorr, who pointed to things such as the Smith Center as a positive.

On the other side of investment is how to keep the city clean, an important element, according to Stevens.

“The basic elements, the safety, the cleanliness, we have to continue to work on the homeless issue and the busker issue,” Stevens said. “Those are really the key factors that can predicate what the growth rate is going to be in 2020.”

Stevens added that the region needs to make it so the downtown traveler can get around the city in an easy manner: using such things as cabs, Uber and better highway access.

Hughes added that Project Neon could have some impact on accessibility, though he didn’t know how much.

Being in the mix might also be an important part of growth.

Schorr added that having more people live downtown is also an important part of its success.

A success in this department was the groundbreaking of a 226-unit mixed-use housing development at the end of 2015 at 917 E. Fremont St. And other projects such as the renovation of The Ogden and Juhl towers, which is heading to the market in the spring. At first, Juhl will be offered to current renters.

The event was sponsored by the Downtown Vegas Alliance, a group focused on downtown Las Vegas’ growth. The group’s members include some of downtown’s biggest labels and others in Las Vegas, including Downtown Project, Downtown Grand and Switch Communications.