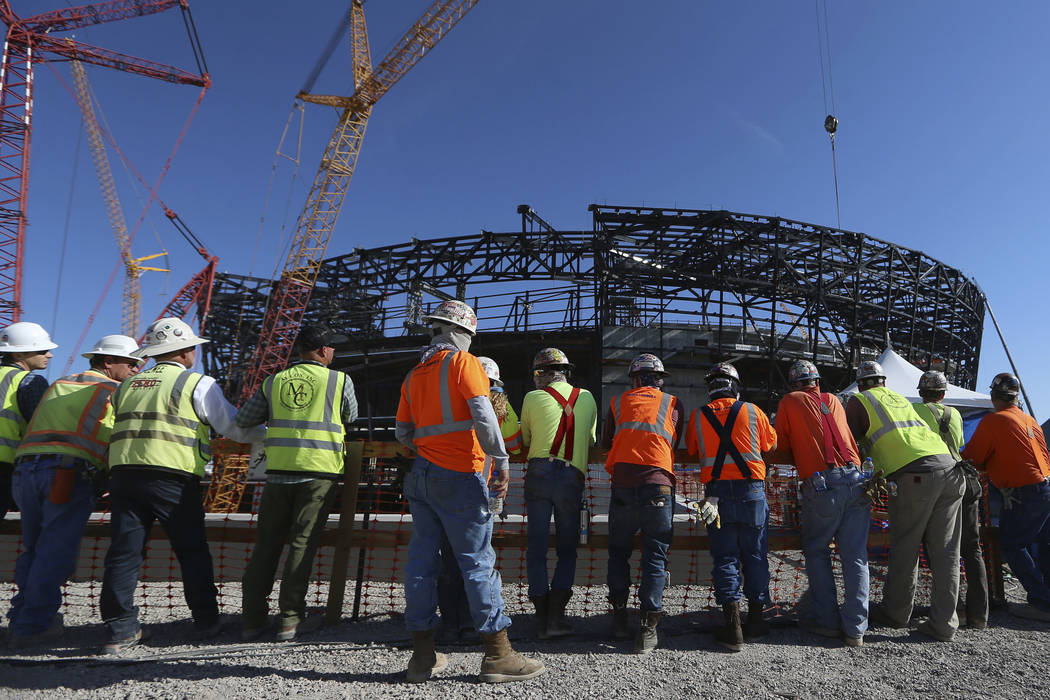 Thornberg is bucking the trend of 74 percent of economists surveyed by the National Association for Business Economics who said they were concerned enough with some of President Donald Trump’s economic policies to expect a recession by the end of 2021. Some 38 percent said it will happen in 2020, 34 percent next year and 2 percent this year. Thornberg, director of the UC Riverside School of Business Center for Economic Forecasting and Development, is reflective of that one in four who aren’t expecting a recession.

Economists have fretted about a slowing economy in Europe (Germany is already in recession) and China, and fears about an ongoing trade war with the Chinese.

That might worsen after Friday when President Trump said the U.S will raise duties on $250 billion in Chinese goods from 25 to 30 percent and tariffs on another $300 billion from 10 to 15 percent. That was in response to China announcing new tariffs on $75 billion in U.S. goods. China had previously announced it won’t buy U.S. agricultural products.

Thornberg said she foresaw the Great Recession in the last decade and doesn’t get why people are so pessimistic about the economic forecast at this time despite global developments.

“This is not the first time in the last 10 years where you had this massive spasm of pessimism, and then it fades away.” Thornberg said. “My greatest disagreement with the naysayers is I understand the global situation is a little tenuous and some ripple effects but not as big as people are pretending. You would be foolish not to suggest that there aren’t some ripple effects in the trade war with China. The question is whether that can bring down the U.S. economy.

“The answer is wrapped up in the American consumer. They are a little over 70 percent of the economy, and they are really the balance that keeps the boat upright. If the consumer is out of whack, it can be ugly, but if the consumer is in good shape, they have the ability to push us through what otherwise is a serious problem. As I look at the American consumer, today, I see sunshine and light. For all the ongoing pessimism being pushed forward by the folks in the media you really don’t look at consumer in a reasonable way and come away with anything but good news.”

Thornberg said the labor market is tight, wages are rising, interest rates are on their way down, and because of changes in mortgage lending the burden on consumers is lighter. People’s savings rates are healthy at 8 percent and the housing market is stronger after a weak first half, he said.

“If the consumers are as healthy as they are, they can help the U.S. economy weather a lot of these external influences that people are worried about,” Thornberg said.

Analysis shows it was consumer and government spending that helped GDP in the second quarter with personal consumption up 4.3 percent, the highest since the fourth quarter of 2017.

Thornberg said it’s rare that economists are on the same page but he believes they put “too much weight” on financial market performance like when the stock market declines as it has in the last two weeks.

Thornberg joked that economists are like doctors and are called as needed. He said he hasn’t heard from people in Las Vegas that say how well the economy is going here.

“Isn’t it great,” Thornberg said. “People are moving in, and there’s a lot of good job growth that’s healthy. Unemployment rate is low, incomes are good and housing market is steady. The gaming industry is one of the issues for the region. Clearly, gaming is not going as well as in the past. I think that has a lot to do with the demand for entertainment changes that you are seeing in Vegas with sports.”

Thornberg is among economists and banking executives who are coming to Las Vegas or recently attended conferences here to talk about the economy and the business climate. What happens across the country impacts Las Vegas with visitation.

Sharon Miller, the head of small business for Bank of America attended the MGM Women’s Leadership Conference, said the bank surveys business owners twice a year to understand their concerns.

The No. 1 concern from business owners is the cost of health care and how do I make sure I have the right benefits for my employees,” Miller said. “We are in a 50-year low for unemployment levels, and it’s an economy where business owners have to attract talent and keep talent.”

Miller said she took notice of the construction of the $1.9 billion Raiders stadium that’s being financed by Bank of America.

“When I think about the Las Vegas economy, I see cranes and homebuilding,” Miller said. “All that is good for the local economy. I used to live in Las Vegas, and I have seen that boom and bust. Everyone I talk to it seems there is optimism in this city as well.”

Miller said women continue to open up businesses at fast pace of twice the rate as men. She attributes one reason for that is women leaving the corporate world to start their own business. Some may have left to start a family and then launch a business, he said. They have started the Bank of America Institute for Women’s Entrepreneurship to make sure women have the right information, tools and resources to know how to thrive in their business as they grow.

Some 58 percent of those surveyed reported increases in revenue in the past 12 months and 64 percent said they expect increases in the coming year.

Brian Duncan, Wells Fargo’s business acquisition manager for the Desert Mountain Region that includes Nevada, Arizona and Utah, said two thirds of businesses said the trade talks affected their businesses very little or not at all.

“When we asked what is the most important thing for them as attracting new customers as their top challenge,” Duncan said. “I get the feeling in talking to business owners in Nevada that they are focusing on things that they can control. The trade wars and tariffs are not something they have control of. They are focused on trying to grow their revenue and their business. Trades and tariffs affect larger businesses than smaller ones.”