Skip to content
Sign up for our newsletter
section-ads_high_impact_1
By BUCK WARGO SPECIAL TO LAS VEGAS BUSINESS PRESS
October 7, 2016 - 1:00 pm 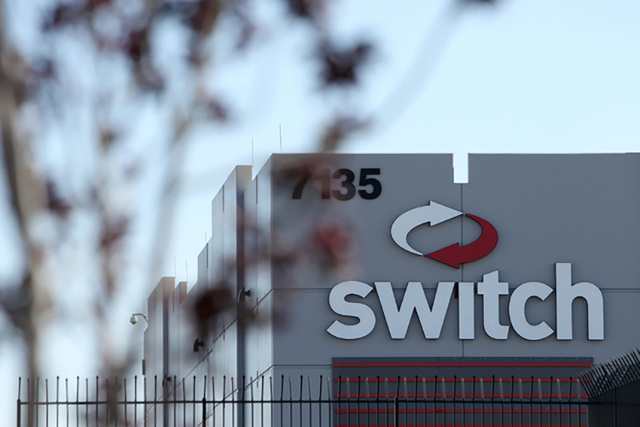 Switch, the Las Vegas-based company that operates data centers for some of the largest companies in the world, used the fifth annual Governor’s Conference on Business held Sept. 30 at the Rio to ceremoniously turn on its superloop connecting Las Vegas to Reno with 500 miles of fiber optic cable along U.S. Highway 95. (Erik Verduzco/Las Vegas Business Press)

The recovery from the Great Recession and the importance of diversification took center stage at the Governor’s Conference on Business, and nothing epitomizes that more than Switch.

The Las Vegas-based company that operates data centers for some of the largest companies in the world used the fifth annual conference held Sept. 30 at the Rio — with more than 800 people in attendance — to ceremoniously turn on its superloop connecting Las Vegas to Reno with 500 miles of fiber optic cable along U.S. Highway 95.

“This is something that will change the future of Nevada,” said Adam Kramer, executive vice president of strategy for Switch. “The superloop will connect Las Vegas to Reno and Reno to the Bay Area and the Bay Area to Los Angeles and Los Angeles to Las Vegas faster than you can blink an eye.”

That 500-mile stretch between Reno and Las Vegas never had been connected, Kramer said. Previously it could be done only by going through California or Utah, but now businesses can use Switch data centers in two parts of the state, he said. It will provide world-class access to internet continuity.

“As Nevada continues to be an attractive spot for companies from California to move … and avoid natural disasters and taxes, they need their connection to California and 40 million eyeballs in the Western U.S.,” Kramer said. “They can come to Nevada and maintain that continuity and do that business.”

Last year, the company unveiled plans to build a $1 billion, 3 million-square-foot data center near Reno. It also announced an additional data storage site in Las Vegas near where it already has two adjacent to the 215 Beltway.

When that was announced at Gov. Brian Sandoval’s State of the State speech in January 2015, the governor said that would make Nevada the most digitally connected state in the country, and it has, Kramer said.

“Gov. Sandoval has been the champion for the new Nevada and (to) make sure we transform the state so we never have a repeat of the Great Recession,” Kramer said. “It was a promise we wanted to deliver on.”

The connectivity means that businesses in rural Nevada will have access to the same fiber as Clark and Washoe counties, Kramer said. It means rural hospitals and schools will have greater connectivity, which is also important for telemedicine in the state, he said.

Kramer said no one just runs a business any longer. Instead, everyone is running a technology company, even small businesses. This applies equally to making payments, selling goods on eBay and posting to social media.

“You need the internet to run your business, and whether or not if you know it, you rely on the data center to do what it is you do,” Kramer said.

Sandoval said Nevada has plenty of work to do to move up on lists that compare states, but it’s nice to be a leader in this area. When he travels abroad, elected officials are amazed to learn Nevada has the largest data center in the world.

“For those who may not know me, I’m hyper-competitive, and for me to stand up here and say we’re the first in the nation and likely the first in the world to have a system like this, this is really a big day, and you have been able to see a moment in history made by our state,” Sandoval said.

Sandoval said it’s important to understand where Nevada was to show how commitment and perseverance can pay off. Nevada went from being the fastest-growing state in the country with 1.2 million jobs to losing 186,000 jobs over three years during the recession.

The jobless rate hit nearly 14 percent, the highest in the country. The state also led the nation in foreclosures and bankruptcies.

In the construction industry, Nevada lost 80,000 jobs. There were 30,000 jobs in hospitality. There were half-finished projects along the Strip and strip malls that were empty.

“It was almost overwhelming,” Sandoval said. “It would have been easy to give up, but that’s when Nevadans came together. We recommitted ourselves to building a new and stronger Nevada. We knew we had to diversify our economy.”

Sandoval announced to the crowd how jobs have grown every month since 2011, 68 consecutive months. It’s momentum from businesses expanding and opening new locations, he said.

Sandoval not only touted Switch but the Tesla battery factory in Reno and the Faraday Future electric car plant in North Las Vegas. He mentioned Amazon, Apple, Zulilly and others coming to the state. The state has been aggressive in using incentives to lure companies.

“It’s starting to happen,” Sandoval, saying the state held back one announcement until the conference. “As of August, Nevada has officially gained back every single one of those jobs in five years.”

The unemployment rate fell from 14 percent to just over 6 percent, he said. The claims for unemployment are now below the rate of 2006, when the economy was the best it’s ever been, Sandoval said.

“That’s another strong indicator of how our economy is doing,” Sandoval. “We had to diversify. We had to change our economy in meaningful and sustainable ways, but we’re always proud of our historical drivers in hospitality and construction.”

Sandoval said 36,000 trade and transportation jobs have entered the market, more than 34,000 jobs have been added in professional and business services, and health care fields have hired more than 25,000 people.

“These are jobs that didn’t exist before,” Sandoval said. “This is exciting, and we have to build upon that success. Our state has always welcomed hard work, individualism and independence. That’s why we’re happy with the success of attracting the new industries that will define the next generation of innovation and why existing companies continue to make global headlines. … Our state is leading and our state is bold and our state has courage and vision, and other states will look to us and say, ‘See what Nevada is doing.’”

Sandoval said it will be important during the 2017 legislative session to focus on education and workforce development to make sure Nevada has the people trained to fill those positions and that they have the skillset to succeed.