Skip to content
Sign up for our newsletter
section-ads_high_impact_1
By Craig A. Ruark Special to Southern Nevada Business of Medicine
June 19, 2016 - 8:00 pm 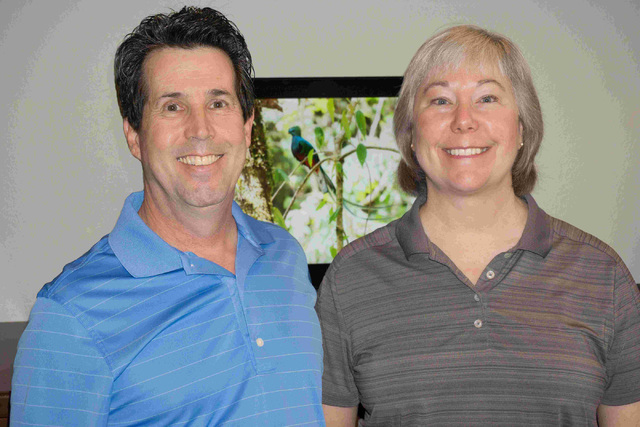 Jeff Saffer and Vicki Burnett are the driving forces behind Quetzal, a program that helps make biomedical research searchable. Craig A. Ruark, special to the Las Vegas Business Press

Jeff Saffer and Vicki Burnett became entrepreneurs out of necessity.

The spouses, who hold doctorates and are biomedical researchers, hit a wall in being able to search for the scientific literature they needed.

So they worked to get it.

“The ability to find authoritative documents is very important,” Saffer said. “When searching the answer for an illness, you do not want to end up at John Doe’s blog and find out that his grandmother got better when she wore a green dress.”

The pair was struggling to understand the flood of information their work was generating. Out of frustration, the couple developed a rudimentary algorithm for a search engine to narrow their search results to more credible sources.

What started as a programming tool for their own research blossomed into a useful search engine for other research groups, too.

In 2008, the couple formed Quertle, an analytics company. (Quertle is a made-up word formed by combining “query” and “article”). Their initial free site became popular and was used in 192 countries worldwide. They hired programmers to help perfect their search engine, and the knowledge they gained over the next seven years led them to launch a new subscription-based program in 2015.

That program is Quetzal, named for a turquoise-and-red tropical bird that the Aztec and Mayan people regarded as the “bringer of wisdom to mankind.”

“However, just being able to search information does not bring wisdom because it is filled with misinformation and can be difficult to comprehend,” Burnett said.

“The way we do things with our artificial intelligence and quantum logic methodology is that we not only find the right document, but we make it intelligible for people to understand what is there and what ties those particular results to their query,” Saffer said. “That is where we are trying to provide the wisdom and not just a list of results.”

The Quetzal search engine uses information from defined sources; it is a licensee of the National Library of Medicine and has access to information from all the biomedical articles published through it, as well as Toxline, PubMed, Biomedical News, U.S. Patents, and the Agency for Healthcare Research and Quality.

When a query is made, Quetzal looks at the documents stored in the database via a computer code that uses artificial intelligence, pattern matching, quantum logic, computation linguistics, and computational statistics. Those methodologies combined let the computer understand what the authors are talking about, then map the user’s query against points the author is making in the document so that the person searching receives a display of highly applicable query results.

Besides searching out information, the Quetzal site lets researchers hold real-time online discussions with colleagues about documents they have found. Unlike regular online chat rooms, Quetzal lets users invite selected individuals into the conversation. That conversation is encrypted to prevent hackers from ‘listening in.”

“The biomedical industry is very competitive, and there are a lot of people out there, trying to get a corporate advantage over their competitors,” said Saffer. “We do our best not to let that happen,” Burnett said.

When the couple started their company in 2008, they were living in Boulder, Colorado. They moved to Henderson in 2010.

“People don’t realize that having an international airport that’s always open can be critical for a business; not like in Denver when it closes down in the winter for snowstorms,” Burnett said.

Saffer said, “Of course, the tax structure, which is perhaps the number one reason for our relocation, along with the environment, made Southern Nevada a very desirable place to live.”

Wanting to inspire more diversity and bring additional bioscience industry to Nevada, Saffer and Burnett joined Lucine Biotechnology President and CEO Chandler Marrs to found the Parallel Innovation Labs project. The trio began holding monthly meetings they called the SciTech Hookup and invited other independent researchers to join them over cocktails. That effort grew into an annual conference with more than 300 attendees and more than a dozen vendors.