Skip to content
Sign up for our newsletter
section-ads_high_impact_1
By STAN HANEL SPECIAL TO LAS VEGAS BUSINESS PRESS
March 27, 2017 - 1:05 am 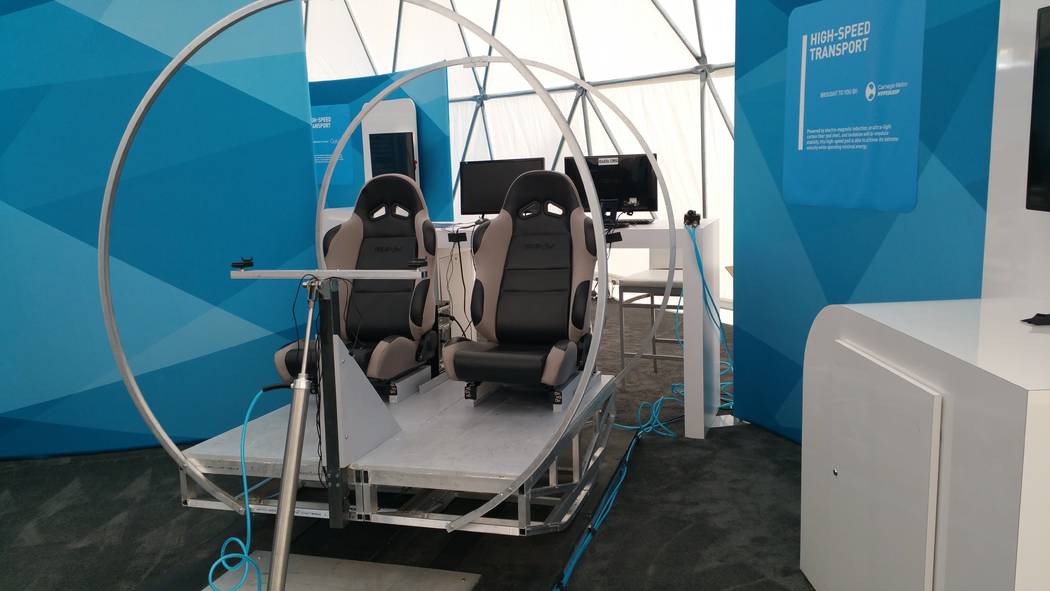 HyperLoop One recently constructed a DevLoop test track system in North Las Vegas. The test environment will use a vacuum pump to reduce air pressure within the tube to test a full-scale Hyperloop pod under real-world performance conditions by June. (Courtesy)

Kitty Hawk, North Carolina, December 1903: Orville and Wilbur Wright, two bicycle mechanics, launched their home-built “heavier-than-air” flying machine four times off sand dunes at a nearby beach, taking advantage of the strong tailwinds there. Orville’s first flight stayed aloft for 12 seconds and traveled 120 feet. Wilbur flew the farthest that day, staying suspended in the air for 59 seconds and traveling 852 feet. Over the next 100 years, the aerospace industry built on their pioneering achievements to reach ever-farther distances and speeds, culminating with the landing of the first astronauts on the surface of the moon in 1969.

North Las Vegas, Nevada, June 2017: Employees at Hyperloop One are hoping for a “Kitty Hawk moment” of their own when their company launches its first test of a high-speed pod that can accelerate and glide on waves of opposing electromagnetic fields. The pod’s speed will be accelerated even more by encasing the vehicle in a long, evacuated tube that will minimize air pressure resistance. The net result should be a high-speed vehicle that can travel faster and cost less to construct than traditional magnetic-levitation trains in Japan and China.

Hyperloop One unveiled and tested its linear electric motor technology on its proving grounds in North Las Vegas last May. The company plans to verify a more complete evacuated tube system through its newly constructed DevLoop test track within the next three months.

Bruce Upbin, communications manager at Hyperloop One, gave a presentation about his company’s technologies to attendees at the CONEXPO/CON-AGG trade show at the Las Vegas Convention Center March 2017.

Upbin noted that the airline industry is no longer growing but consolidating. Roadway systems in major urban areas are subject to gridlock and traffic jams. High-speed railways in other countries have achieved only incremental gains in time and speed while employing expensive technologies like cryogenically cooled magnets.

Hyperloop One hopes to achieve speeds up to 750 miles per hour for cargo and passenger pod modules, as each vehicle zooms through evacuated tunnels within a seamless flow of other computer-controlled pods. That’s four times the speed of most existing mag-lev trains.

“L.A. to Vegas in 18 minutes,” Upbin noted. “One-day roundtrips are possible as you eliminate time and distance.”

Las Vegas could become a transportation hub and gateway to major cities in five surrounding states with that kind of connection speed. Once a cargo pod reaches its stopping point, automated drones or shipping trucks could complete delivery of each package to the “last mile” of a target destination.

At the North Las Vegas test site, individual sections of Hyperloop tube have been mounted on top of concrete pillars and welded together to form the DevLoop test track system. The company obtained a large-scale vacuum-pumping system and has begun monitoring the amount of air pressure reduction possible within the DevLoop tube system.

The cargo and passenger pods are equipped with permanent magnets embedded as a Halbach array within the base of their chassis platforms. Each design iteration has been developed and tested in smaller vacuum chambers within the company’s Los Angeles development center.

An aluminum track will be built along the bottom inside floor of the DevLoop tube system in Nevada. The metal track will serve as a repelling surface for the Halbach array installed in the base of each pod. As the permanent magnets move at high speed over the aluminum surface under the traveling pod, they will induce eddy currents in the metal track that in turn create a magnetic field of opposite polarity. The repelling magnetic fields will continue to suspend the pod above the aluminum track as it surfs on this magnetic wave within the low-pressure atmosphere of the enclosed tube system.

Unlike traditional mag-lev trains, the Hyperloop system does not require as many electromagnetic propulsion points. Once acceleration has been amplified to a fast-cruising rate of speed within the low-pressure tube, the need for additional acceleration or deceleration by active electromagnetic pulse generators can be spaced farther apart along the length of the tube, as each pod glides over the aluminum track.

The original transportation concept of using evacuated pneumatic tubes for transporting pods and people has been envisioned by engineers and scientists such as U.S. rocket pioneer Robert Goddard for more than 100 years.

Today, some commercial bank drive-up windows still continue to allow customers the convenience of depositing money into a cylindrical pod that is inserted into a pneumatic tube. Close the tube chamber door, press a button to send, and the cylindrical pod is sucked up and delivered to the teller window inside the bank while the teller talks with the driver through an intercom system.

The most recent wave of Hyperloop development interest was christened and jump-started by Elon Musk, CEO of both SpaceX and Tesla Inc. Musk published an open-source research paper during 2012 that outlined a vision for his Hyperloop system, with a design that employed linear induction motors and compressed air. Like a combination of a railgun and an air-hockey table, the system would scoot frictionless pods through an enclosed, low-pressure tunnel system. The enclosed Hyperloop tube system could be routed underground, on the earth’s surface, or above ground on elevated platforms, in the same way as a traditional subway system.

Musk continues to encourage research toward his Hyperloop transportation concept among international university engineering teams. SpaceX hosts a periodic engineering competition at company facilities in Hawthorne, California, where a half-scale test track system has been constructed.

Competing teams can propel their vehicles within the evacuated tube track by using either standard rail, compressed air or magnetic levitation. Cameras and test equipment inside the evacuated tube can monitor the performance of each vehicle over each section of track, in order to gather data for analysis after each test run.

Musk and SpaceX are also investigating and developing high-speed tunneling machines that would need to dig tunnels at least three times faster than existing systems in order to make the Hyperloop tunnel systems less costly to build.

For more information about Hyperloop One, visit the company website at: hyperloop-one.com.