Skip to content
Sign up for our newsletter
section-ads_high_impact_1
By Craig A. Ruark Special to the Las Vegas Business Press
March 7, 2016 - 5:38 pm 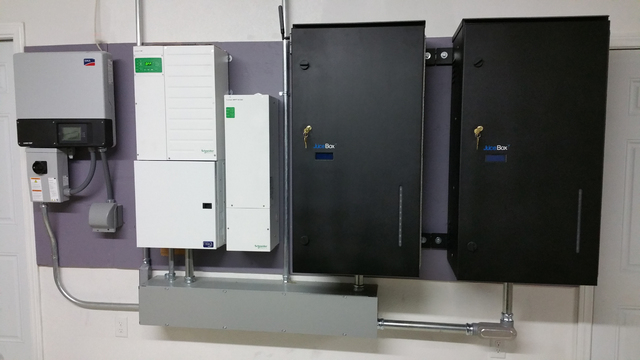 If innovation truly is the mother of invention, a deal between a Silicon Valley energy storage firm and a Las Vegas solar installer may be just what Nevada’s solar industry needs.

In January, the Public Utilities Commission of Nevada (PUCN) redefined the residential rooftop solar industry with its revision of net energy metering regulations. The decision has resulted in the loss of perhaps thousands of solar industry installation jobs, launched several lawsuits and spawned a bid for a ballot measure.

So when opportunity knocked, JuiceBox Energy, a Silicon Valley-based company with offices in Las Vegas, opened the door to what utility companies such as NV Energy might consider a Pandora’s Box.

Teaming with Las Vegas-based Bombard Renewable Energy, one of the leading installers of residential solar in Las Vegas, JuiceBox is providing a battery system that is capable of both peak shifting and power backup.

Because of the PUCN decision to reduce the amount of compensation that rooftop solar customers will receive from selling excess solar energy to the grid, rooftop solar investors may not see a return on that investment within their lifetime.

The JuiceBox system works by capturing and storing the energy generated by a rooftop solar system and then dispensing that stored energy during “peak energy” rate hours as defined by NV Energy.

“While no system is designed to take a household entirely off the grid,” said Greg Maguire, vice president of operations for JuiceBox, “we can significantly reduce the amount of money paid to energy utilities by reducing the amount of energy consumed during peak energy rate hours.”

With the JuiceBox system, the house draws power from the solar system first, the JuiceBox batteries second, and the utility grid third. In this way, nearly 100 percent of the power generated by the rooftop solar system is used by the homeowner. In a rooftop system without battery storage, much of the energy is generated during the daytime hours when residents are at work or school and unable to use the power. The excess power is then sent to the power grid where the utility purchases it at a significantly discounted rate.

JuiceBox allows the homeowner to use the power generated by the rooftop solar system to operate normal appliances and air conditioning system, and send the excess energy to a battery storage system, during the hours when NV Energy charges the most for its power. In the evening, when the batteries are drained, the household uses power from the grid when the rates are the least expensive.

Bombard Renewable Energy completed its first installation of the JuiceBox Energy storage solution in January at a Las Vegas home. The installation includes dual 8.6kWh JuiceBox Energy storage systems (17.2kWh total capacity) and an 11kW solar array. It is predicted that the annual energy savings provided by this system will be around $16,000 per year. For every 6kW of solar system installed on the roof, there is one inverter and the capability to install up to two 8.6 kW JuiceBox storage systems. JuiceBox batteries are composed of lithium-ion nickel manganese cobalt and deliver a minimum of 4,000 charging and discharging cycles over 10 years of operation and average about $10,500 installed after federal rebates.

“Residential solar is here to stay in Nevada,” said Bo Balzar, operations manager of Bombard Renewable Energy. “Bombard is excited to be the first solar installer in the state to join JuiceBox Energy on its intelligent, grid-connected energy storage system. This type of net energy metered solar PV power system will allow ratepayers to contribute to the sustainable energy future of Nevada by increasing their use of renewable energy, and lowering their costs, for many years to come.”

JuiceBox started the research and development on the product in 2013 and installed its first system in 2015. To date, the company has installed the systems in seven states, predominantly where energy rates are high, the need for backup power exists, where there is a focus on green energy, and where time of use rates are applied. Nevada fits each of those categories.

The next project on the books for JuiceBox is an energy management system that controls the thermostats and water heaters the way the customer wants the system to work, with the slogan “We put the customer in charge.”

According to Maguire, “By investing in a JuiceBox Energy System, you are increasing your self-consumption, reducing reliance on the grid, creating a backup power, and powering a greener future.”