Skip to content
Sign up for our newsletter
section-ads_high_impact_1
By BUCK WARGO SPECIAL TO LAS VEGAS BUSINESS PRESS
March 20, 2017 - 12:14 am 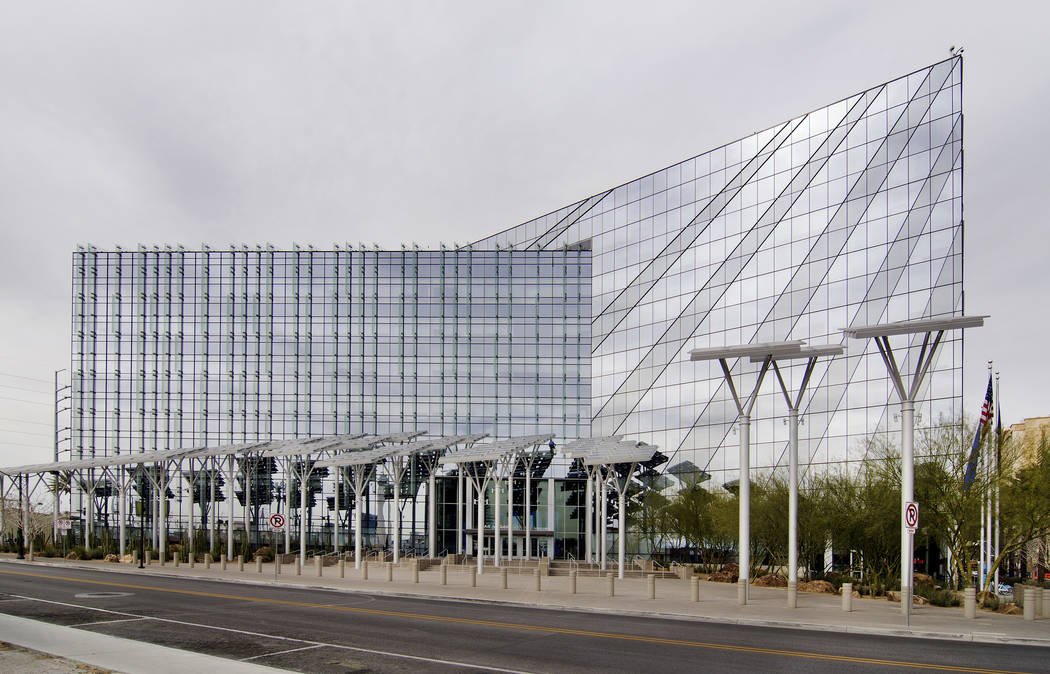 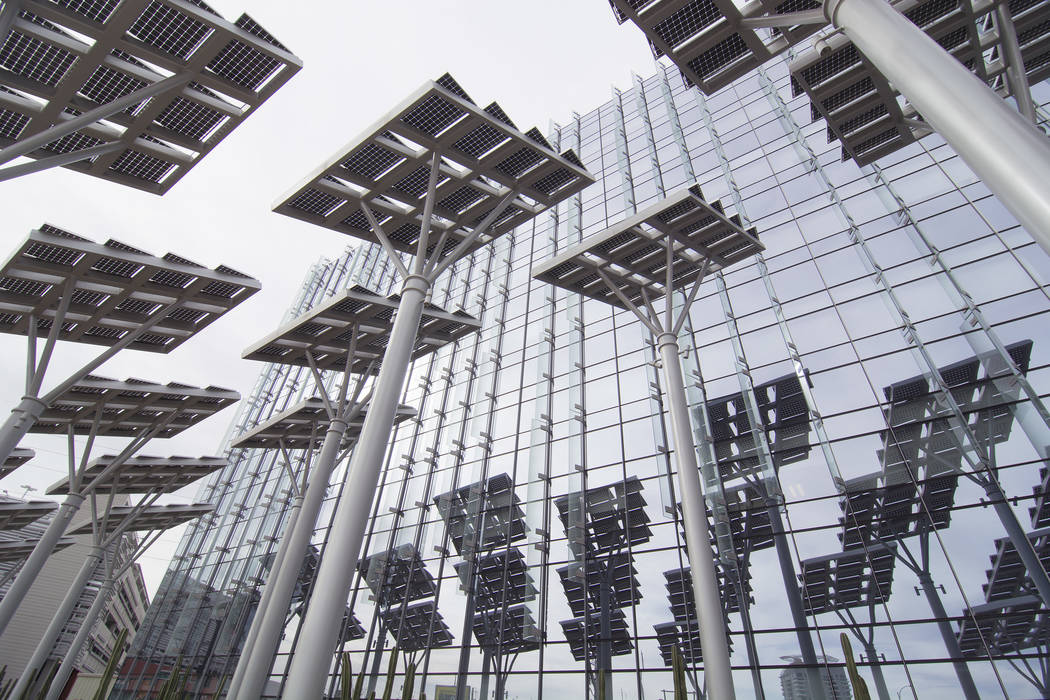 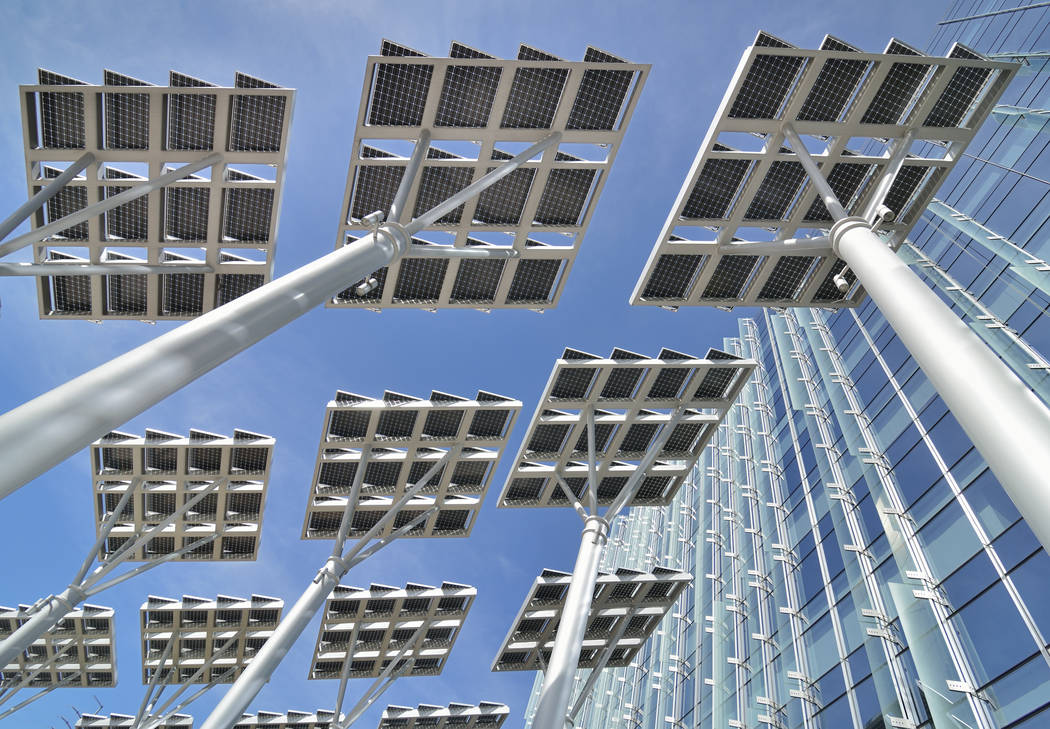 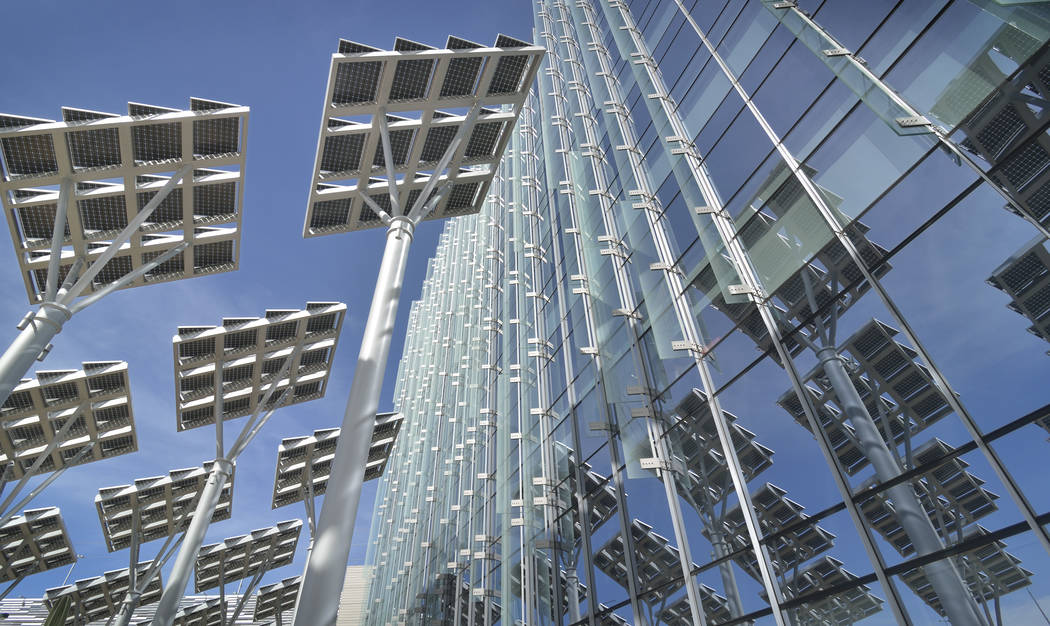 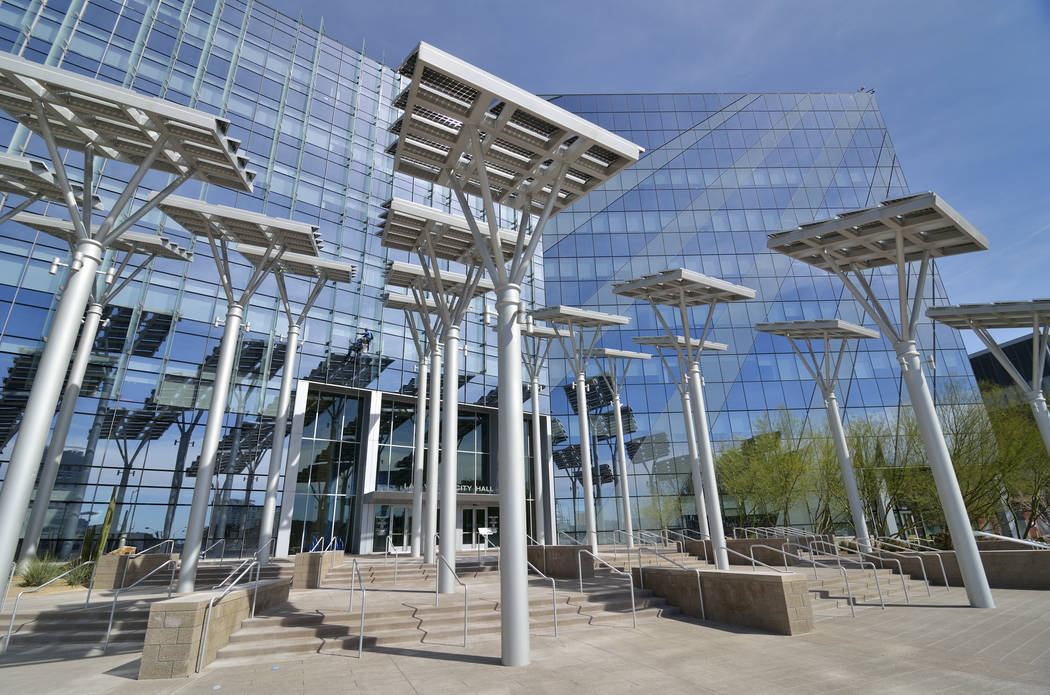 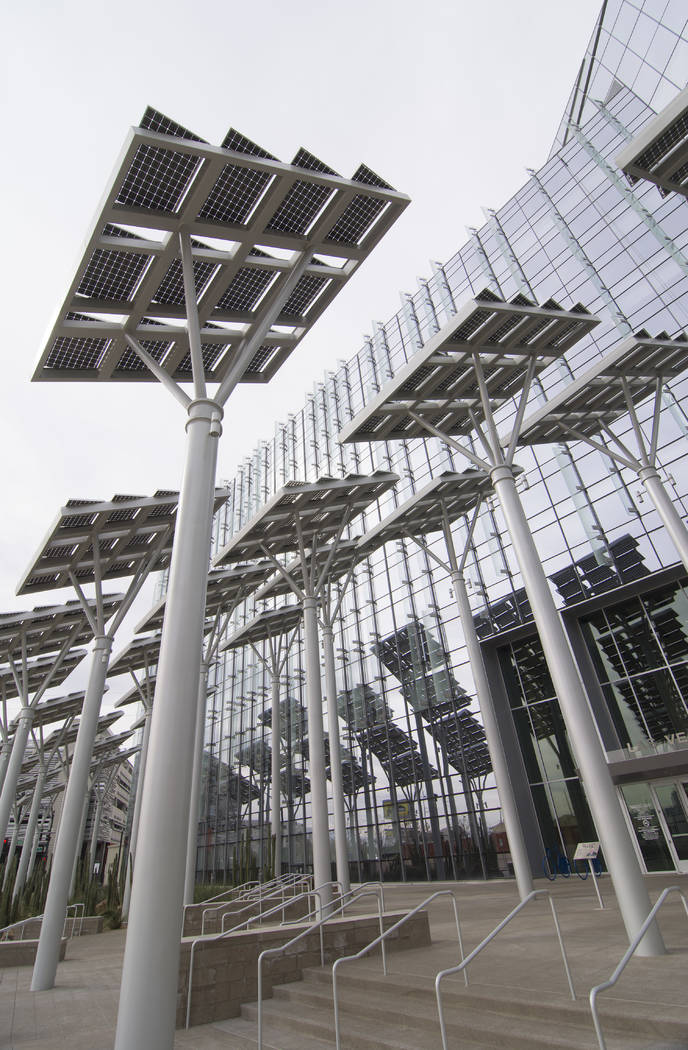 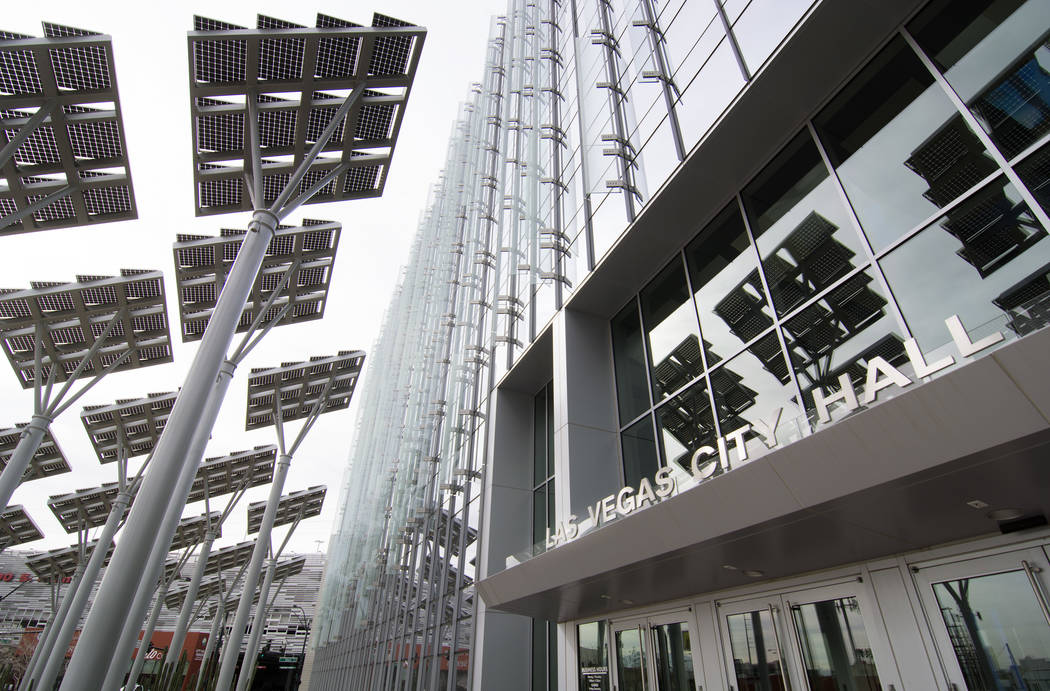 Municipal governments have learned energy efficiency not only helps the environment but can save millions of dollars, and they show no signs of backing off their strategy.

The city of Las Vegas deems itself the leader in the region when it comes to being green for energy. It recently completed an agreement with NV Energy to deliver 100 percent of the city’s retail energy load from renewable energy sources, according to management analyst Marco Velotta. That makes Las Vegas one of four cities across the country to do so, he added.

“We have done quite a bit as a city,” Velotta said. “This is something the mayor and the council believe in, and in 2008, a strategy was put together and plan put in place, and we achieved a lot of the goals we set out to accomplish. We’ve had a great deal of success.”

Most of the energy the city gets from NV Energy is from the Boulder Solar photovoltaic power plant. The city also will be getting hydropower this year from Hoover Dam, which Velotta said is a first for the city. As of this year, every kilowatt hour comes from a renewable source, he said.

“All together, that renewable energy is going to set us apart from all other municipalities that have only begun to discuss that as a goal,” Velotta said. “It takes years and a substantial investment in order to accomplish something like that.”

Las Vegas pays small premiums to use renewable sources, but when combined with energy-efficiency projects, the city has reduced its overall energy costs by more than $5 million a year, Velotta said. The city paid about $15 million a year in energy costs in 2008, and now the annual bill is less than $10 million, he said.

Las Vegas has 40 city buildings and facilities where there are elements of solar panels to provide power, Velotta said.

City Hall, for example, has three solar panel systems. One is across the street from City Hall at its parking garage.

There’s a system on the rooftop of City Hall and a solar tree system in front of the building in public view, Velotta said.

“Last year we generated 300 kilowatt hours and 10 to 15 percent of the building’s total,” Velotta said.

The city’s green initiatives include its fleet of electric vehicles and installation of bike lanes to encourage people to bike as an alternative form of transportation, Velotta said. Light rail also will be part of the city’s future.

Las Vegas has switched from mercury vapor, high-pressure sodium fixtures to LED lights to reduce energy consumption. Some 80 percent of the streetlights have been retrofitted so far. In addition, 15 of the largest energy-consuming facilities have undergone upgrades to reduce their energy use, he said.

Heating and air-conditioning systems have been upgraded and windows replaced to keep heating and cooling inside the building, Velotta said. There have been other changes with lighting controls and mechanical controls such as thermostats.

“We’re going to continue looking for ways to be more energy-efficient and keep costs down and be sustainable,” Velotta said. “A lot of people from around the country want to know what we have done. We often share our stories with other communities, not just in the Southwest, but nationwide and worldwide. It’s good to find out what other communities do and what works in some places and doesn’t work in other places. That’s beneficial for us.”

“This has a much smaller carbon footprint than gas or coal-fired electric generating plants,” Goldberg said. “A considerable amount of the power for our wastewater facility and for many of our water pumps comes from hydroelectric production at the dam.”

North Las Vegas City Hall is a LEED (Leadership in Energy and Environmental Design) gold building certified by the U.S. Green Building Council. The building is designed to reduce energy and water use and reduce greenhouse gas emissions, according to Goldberg. The largest use of solar panels is on the roofs of the parking structures at City Hall.

Many vehicles in the city fleet are hybrids that run cleaner, use less fuel and conserve energy, Goldberg said. Several city vehicles run on propane — a green energy source — and there are electric car-charging stations at City Hall, she said.

Street lights and facilities such as Craig Ranch Regional Park have LED lighting, and the city is in the process of systematically upgrading all of its street and trail lights to LED to reduce power consumption by as much as 50 percent, she said.

“Several of these lights are also remote-controlled with smart controllers that let us monitor and control, remotely, in real time, exactly how much light is needed, therefore enabling us to adjust the settings remotely and immediately to be extremely energy-efficient,” Goldberg said.

North Las Vegas offers PayNearMe, a smartphone application that enables customers to obtain their billing information electronically and pay their bills at multiple third-party locations, Goldberg said. That conserves paper and reduces driving, which also cuts down on greenhouse gas emissions, she said.

“There are many things we’re doing to not only meet energy but environmental, economic and social needs of today without compromising the ability of future generations to do the same,” said Henderson spokesman Keith Paul.

Henderson is in the midst of a lighting retrofit project to convert all of its park and trail lights to LEDs. Several years ago, street lights were converted to reduce energy consumption, and all new city-built facilities are required to meet silver-level LEED certification levels set by the U.S. Green Building Council.

“Our North Community Police station is a prime example of that,” Paul said. “When that was built, it was built with solar panels that are able to generate more than 12 percent of the station’s power needs. Sky lights were put in, and windows were placed in such a way to reduce the need for electric lighting.”

“When we build the buildings, there’s some sort of renovation project,” he said. “They’re built to a level certified, and that way it’s always providing a savings in the use of air conditioning and electricity use.”

Henderson moved all of its servers to Switch, not only decreasing power usage but its CO2 footprint, Paul said. The city is using much less power because Switch is a green-certified building as well, he added.

Since 2004, Clark County, through its Real Property Management Department retrofits, has saved more than $17 million and achieved 27 percent reduction in energy consumption within its facilities, said Shane Ammerman, an assistant planning manager.

“Every year, our departments go through and try to retrofit our buildings and save money with new technology and lighting,” Ammerman said.

The county’s 2,700-vehicle transportation fleet uses alternative fuels. Street lights have been converted to LEDs, and 190 intersections have been upgraded, which provides for 50 percent energy savings, he said.

“When we put in new school crossing flashers, they are LED technology, and some of those locations have solar panels for power,” Ammerman said.

“Those were our heaviest users in terms of residents coming to them, but also as far as using energy because both of them have pools,” Ammerman said. “We have educational kiosks associated with those where school-age kids and can come in and check it out and see how solar works and how you turn sunlight into energy.”

Clark County has three LEED-certified buildings, two silver and one gold, Ammerman said. Buildings have a laundry list of items to reach that level from reducing energy and waste to limiting water usage.

The Department of Social Services, through a federal grant for urban development and neighborhood stabilization, retrofitted 230 homes between 2010 and 2013 with an annual energy savings of $806 a year per home, he said.

Even the Welcome to Las Vegas sign has been retrofitted with solar panels to reduce its energy cost, Ammerman said.

In looking for more charging stations in Nevada, state officials will apply for federal and other grants to deal with an increase in electric vehicles on the roads. About a half-percent of the state’s 2.4 million registered vehicles operate on electricity or are plug-in hybrids. The plan calls for building additional charging stations along U.S. Highway 95 between Reno and Las Vegas, a project called the Nevada Electric Highway.