Skip to content
Sign up for our newsletter
section-ads_high_impact_1
By BUFORD DAVIS LAS VEGAS BUSINESS PRESS
October 17, 2016 - 1:42 am 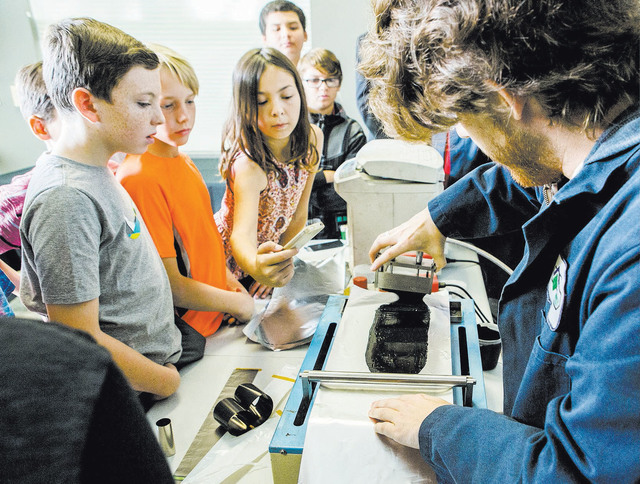 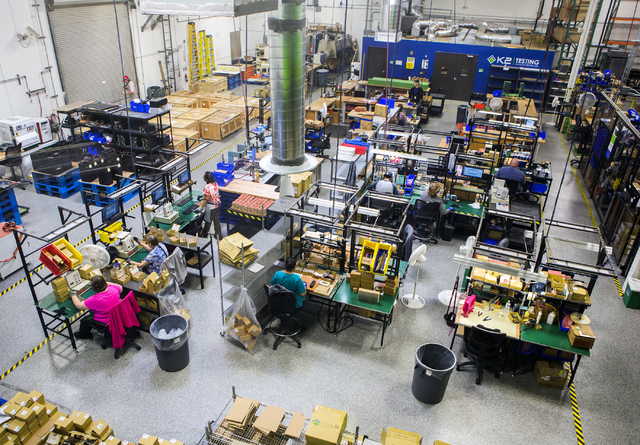 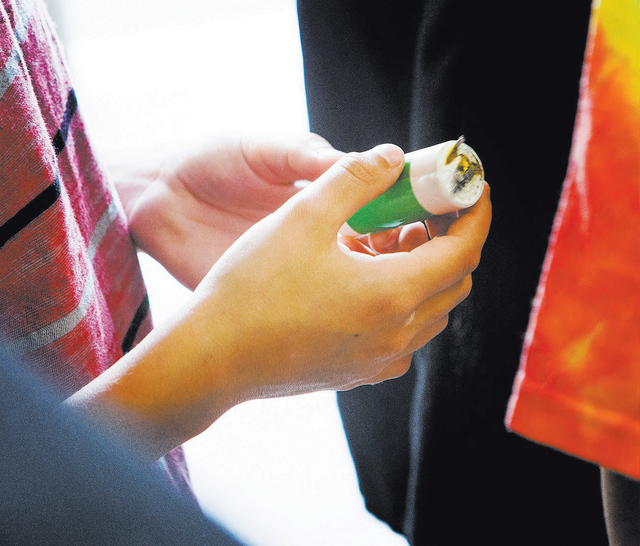 About a dozen students huddle into a tight semicircle, every face set in unbroken concentration as Joe Turner and Harley Haskins, K2 Energy Solutions chemical engineers, demonstrate the principles of battery-cell production using an array of materials spread across a small portable table.

“It was pretty cool,” said 11-year-old sixth-grader Louis Gasparre. “I expected it to be boring, but it turned out to be fun.”

Gasparre and his classmates were among the 1,200 Clark County School District middle and high school students participating in National Manufacturing Day. The event, which took place on Oct. 5, is an initiative to promote the industry and grow the viable workforce by giving young people a firsthand look inside production facilities.

The event is sponsored collectively by three industry organizations: Manufacturing Extension Partnership; National Association of Manufacturers; and Fabricators & Manufacturers Association, International. It began in 2012 with 240 participating businesses in 38 states and has expanded each year. More than 3,000 businesses in all 50 states, plus Puerto Rico, Canada and Mexico took part in the 2016 NMD.

K2 Energy Solutions, which hosted 40 students, is among the 11 regional businesses offering tours during this year’s event. The company produces lightweight, high-energy-density lithium-iron-phosphate-powered batteries and related products for a range of clients, including the U.S. military.

“Right now we have about 72 employees here, and as we expand to the new building, we will keep gradually growing,” said Dr. Johnnie Stoker, founder and chief executive officer of K2 Energy Solutions. “Eventually our goal is to have our own full-size cell production facility, which would employ over 100 people in addition to what we have right now.”

K2 was founded in 2006 and has grown into an international company, with a sister facility in Suzhou, China, 60 miles west of Shanghai. Stoker said the company intends to become an increasingly major world player in lithium battery production, with plants worldwide supplying regional markets.

“I think kids need to realize these kinds of technical jobs are cool,” said Stoker. “We do a lot of neat things, and we need to encourage kids to go into these careers. That is why we are open to this.”

Stoker said he wants students to understand the practical applications of STEM disciplines (Science, Technology, Engineering, Math) so they will be more inclined to pursue these courses of study.

“There’s a real misperception about manufacturing,” said Patricia Lee, NMD project manager. “There’s the idea that jobs are disappearing; that they are dirty and low-wage. They are thinking about things that happened in the ’70 and the ’80s. Manufacturing today is high-tech. It is a very different industry today, sometimes hidden in business parks all over the country, and we want to open those closed doors so young people can see that and get excited about it.”

Lee said the industry is seeing a trend toward reshoring, businesses bringing manufacturing operations from overseas — principally China and Southeast Asia — back to their home countries.

“There are a number of factors that drive this,” she explained. “The need for a labor force with the necessary tech training and skill is one. Another is more control over the process and product. This is something that is difficult to manage from overseas. And a third is the cost and difficulty with shipping product from overseas facilities.”

The manufacturing sector of the Las Vegas Valley economy has made significant progress in recent years, observes Anthony Ruiz, senior director of communications and public affairs of the Las Vegas Global Alliance.

“Our region is transforming right now,” he said. “You see how far we’ve come after the recession. The next step is building a sustainable workforce pipeline where students know these careers are available for them and these companies exist.”

Ken Chapa, economic development officer for the city of Henderson, sees the event as placing a spotlight on the imbalance that has developed between available manufacturing jobs and workers with the skill and training to hold them.

“We went to a purely knowledge-based economy, and somewhere along the line, these manufacturing jobs dried up,” said Chapa. “Then they came back, and there’s this gap.”

Chapa advocates for the industry with prospective job-seekers, pointing out that starting wages often approach $30 per hour.

“You are learning a craft, a skill that a lot of people don’t have nowadays,” he said. “You won’t ever be looking for work. You will always be in demand.”

Snehal Bhakta of the CCSD Career and Technical Education Office has observed that initiatives like NMD can prove beneficial in helping students plan future career paths.

“It is a giant piece of the puzzle,” he explained. “It can help them figure out, ‘OK, what do I want to do?’ A lot of times we think of conveyer belts, that sort of thing, but manufacturing today is a very heavily technological and scientific industry. We are showing them there are a lot of opportunities.”

Bhakta said many participating students find that the manufacturing industry is not for them, and that is valuable also. Among them is CCSD sixth-grader Bailey Kachinsky, 11, who was part of the K2 Energy Solutions touring group.

“It was amazing,” she said during a late-morning lunch break at the facility. “It is very different from what I thought it would be like.”

Bailey said she is grateful for the experience, but believes her passion lies elsewhere.

“I think I want to be a chef. Food really inspires me. It has been building my confidence to do what I can do in the kitchen,” she said.

So is a manufacturing career out of the question? “No, I would consider it,” she said. “It was really interesting to learn about.”