Skip to content
Sign up for our newsletter
section-ads_high_impact_1
By STAN HANEL LAS VEGAS BUSINESS PRESS
August 29, 2016 - 3:40 am 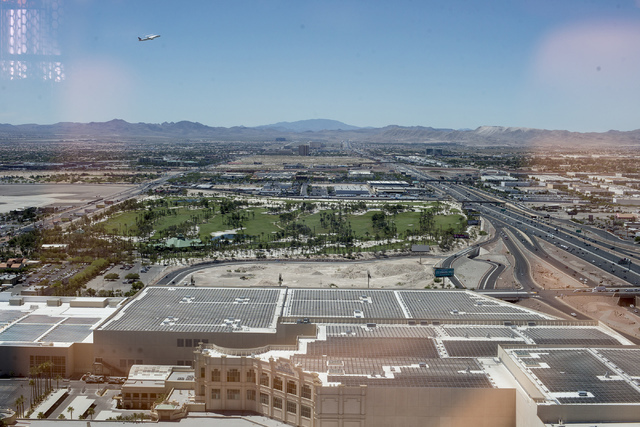 The solar power farm atop the convention center at Mandalay Bay, now ranking as the largest rooftop array in the nation, is pictured in Las Vegas June 17. (Bridget Bennett/Las Vegas Review-Journal) Follow @bridgetkbennett

Is a 100-year old monopoly model for electricity generation within the state of Nevada undergoing political and technological upheaval? The resulting aftershocks may change how commercial businesses obtain electric power for daily operations.

Las Vegas Sands Corp. and MGM Resorts International are sponsoring a Nevada Energy Choice Amendment initiative that will allow voters to consider Question 3 on the Nov. 8 statewide ballot to “vote in favor of making electricity markets open and minimizing the regulatory burden on the electric energy sector” with a Yes vote, that would propose changes to the state constitution. A No vote would allow statewide utilities to continue operating as regulated monopolies.

The breakaway companies also are invoking Nevada Revised Statute 704B, enacted in 2001 by the state Legislature, to allow large-scale customers of a state utility to seek their own “providers of new electric resources.”

If the decoupling negotiations with the utility can be resolved, these corporations will seek to buy or produce their own electric power from independent generation resources at wholesale prices, instead of paying the commercial retail prices charged by the monopoly utility regulated by the Public Utilities Commission of Nevada.

MGM Resorts International has partnered with NRG Energy to install an 8.3-megawatt photovoltaic solar farm on the roof of the Mandalay Bay Convention Center. The facility consists of 26,000 solar panels and is currently the largest rooftop solar farm in the country. When the sun is shining, the panels can provide 25 percent of the electric power required for daily operations of the resort and convention center below it.

The transmission and distribution infrastructure, administered as a utility grid by NV Energy, must connect to all 1.3 million clients of the utility within Nevada so that electricity continues to flow on a reliable basis 24 hours a day and all year long.

However, utility-scale solar farms are now becoming cost-competitive with fossil fuel plants for NV Energy and Berkshire Hathaway Energy Services, as well. In 2014, the company negotiated a 25-year power purchase agreement with Sun Edison for electricity generated by a 100-megawatt solar farm known as the Boulder Solar Project at a wholesale rate of 4.6 cents per kilowatt-hour.

This was followed by a 2015 agreement with First Solar to buy electricity from the 100-megawatt Playa Solar 2 for just 3.9 cents per kilowatt-hour, the lowest-cost electricity available in the country at that time, according to a Bloomberg financial analysis.

During the PUC rooftop solar industry hearings of 2015, commissioners questioned why 1.3 million customers of NV Energy should continue to subsidize rooftop solar clients to buy electricity from their rooftops at retail purchase rates, while wholesale purchase rates from solar farms were now so much lower.

Energy and Environmental Economics Inc., also known as E3, completed a more recent study of the economic impact of the Net Energy Metering program on all ratepayers. Calculations of benefits and costs of rooftop solar installations by 30,000 NV Energy customers resulted in a net cost of $36 million to all 1.3 million ratepayers, according to the report.

This study contrasted with two other NEM research studies by SolarCity, in cooperation with the Natural Resources Defense Council, and by Brookings Mountain West Institute that showed a net annual benefit of $7 million to all NV Energy ratepayers for the installation of rooftop solar systems.

As of Jan. 1 this year, the cost for non-solar ratepayers to connect to the NV Energy grid in Southern Nevada was approved at a retail rate of $12.75 per month by the PUC, while ratepayers who installed rooftop solar panels on residential homes through the utility’s Net Energy Metering program would pay $17.89 per month. Over the next 12 years, that connection rate would increase every four years to $38.51 per month by January 2028.

After the new 2016 NEM rate schedules went into effect on Jan. 1, NV Energy was permitted to diminish the price it pays for excess energy generated by rooftop solar panels. Reimbursement for excess solar energy returned to the grid is now valued at 9 cents per kilowatt-hour during 2016, but then continues to decrease every four years to just 2.6 cents per kilowatt-hour by 2028.

As a result, many small business owners and developers in Southern Nevada have suspended installation of photovoltaic solar panels on the rooftops of commercial buildings, parking structures, and residential homes during 2016, while waiting to see how recent decisions by the PUC shake out.

“Southern Nevada contractors have been able to bring rooftop solar power to customers at about $3 to $4 per watt installed,” said Bo Balzar, who is an operations manager at Bombard Renewable Energy.

Balzar is also a member of the Technical Advisory Committee for Distributed Generation and Storage, that will be making recommendations to the Governor’s New Energy Industry Task Force in September.

Lennar Corp. chose to remove installed solar panels from the rooftops of a new housing development in Nevada and discontinue a solar power sales option, when the PUC decision was announced in December 2015.

In late July, NV Energy, with the support of the Governor’s New Energy Industry Task Force, filed Advice Letter No. 585-E on PUC Docket 16-07029, to request consideration to “grandfather” existing rooftop solar owners who participated in the net energy metering program prior to January 2016.

“This advice letter seeks separate rates that would apply to grandfathered private generation customers. Grandfathered rates would be identical to rates applied to customers under the full-requirement tariff for a period of 20 years. Eligibility for grandfathered rates is determined based on whether a private generation customer had an interconnected system, or an active and approved application for net-metering service pending on Dec. 31, 2015.”

Small business and residential homeowners that are still considering moving forward to install rooftop solar energy systems under the new 2016 NEM cost structure are looking at the use of battery-backup systems, smart inverters and additional time of use rate schedules provided by NV Energy, in order to connect to the grid but conserve rooftop solar power generation for times when the sun isn’t shining.

More information about solar power technologies, government policies, and provider companies can also be found through the Solar Energy Industries Association at www.seia.org.

The Las Vegas Business Press is owned by the family of Las Vegas Sands Chairman and CEO Sheldon Adelson.