Skip to content
Sign up for our newsletter
section-ads_high_impact_1
By CRAIG A. RUARK SPECIAL TO THE LAS VEGAS BUSINESS PRESS
March 29, 2016 - 8:30 pm 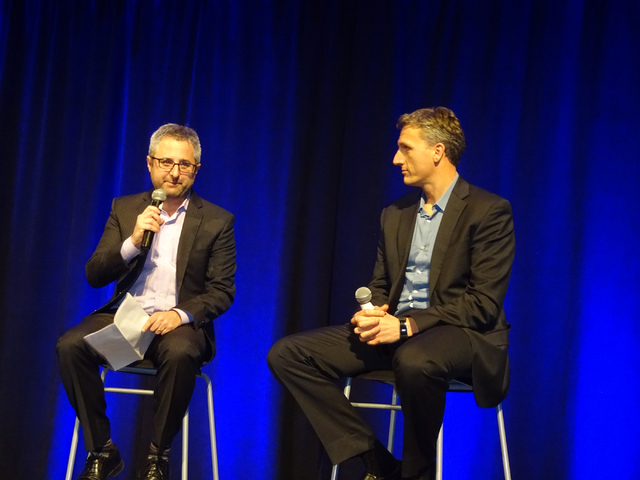 Brandon Hurlbut, left, co-founder of Boundary Stone Partners and former Department of Energy chief of staff, interviews Lyndon Rive, CEO Solar City, about the state of solar and the grid during Convene for Green 2016, an event staged by Green Chips. (Craig A. Ruark, special to the Las Vegas Business Press)

Just a matter of weeks after the Public Utilities Commission of Nevada made its final ruling on the net energy metering rules for residential rooftop solar, Green Chips hosted a one-on-one discussion between Brandon Hurlbut, former chief of staff at the U.S. Department of Energy, and Lyndon Rive, CEO of Solar City.

Not surprisingly, their view of energy’s future is at odds with PUCN’s decision.

During the discussion, Rive described the basics of residential rooftop solar and his ideas on ways utility companies need to change their business models.

“Utilities don’t make money selling energy,” Rive said. “They make money deploying infrastructure (building more power plants and distribution lines), and the way that they recoup the cost of building that infrastructure is through energy sales.

“Don’t get me wrong — we still need a centralized infrastructure, and the utility is still a very important part of the ingredient. But with the implementation of residential solar, you can now start incorporating more equipment into the solution which can make the grid more stable and provide the same services at a lower cost. You need this scale.”

Rive pointed out that “States like California and New York are asking, what is the right long-term policy? How do you create a system that is fair to everyone?”

A recent Public Utilities Commission decision in California has kept the state on a positive glide path to building a distributive grid where everyone can benefit. The first thing they did was institute a time-of-use charge, meaning the energy that you put into the grid is priced at the value of energy at that time.

New York, on the other hand, is using a different approach by trying to reinvent the way a utility makes its money. They are instigating a revenue reform and instead of motivating a utility to build more infrastructure, they are creating an open field, where the residents and businesses put in the infrastructure. The government then tasks the utilities to use that infrastructure, make money from it, and provide quality, consistent service to the end users.

In response to these two approaches, the critics ask, if everyone goes solar, who pays for the grid?

According to Rive, “that question is over exaggerated because, in reality, you are going to have phases in which solar is deployed.”

In the first phase, solar is straight forward net metering, which is what Nevada had until December of 2015.

The second phase is how solar can provide more services to the grid. Instead of just producing energy, solar will also provide voltage control and reactive power. This technology is here today, and these are services that can be utilized by the grid administrator at the utility company.

The third phase is storage, which allows for demand load shifting.

“If Edison came back today, he would be right at home because nothing has changed,” Rive replied. “Most energy is still generated in a centralized location and then transported hundreds of miles to get to a person’s house.”

However, according to Rive, technology has advanced to the point that solar can make a positive impact on the grid.

“The idea that we can deploy a solar system with a smart inverter that can provide reactive power and voltage control 24/7 used to be years away. With current advances, that technology will be available at the end of this year and will be a default part of all new solar systems installed. We used to be able to store energy one way, and now we can go two ways,” Rive said.

“So a home can be solar paneled with a battery, have smart appliances and a programmable thermostat that would all work together, and the consumer would pay for everything,” Hurlbut asked.

“Exactly,” Rive said. “And the long-term manager of that interfacing technology will be the utility.”

The utility will remotely control how much energy is sent to the grid from each rooftop solar system. Instead of having one big power plant with a dispatch load that they manage, they could have hundreds of thousands of little power plants with instantaneous reaction to areas where peak loads are needed.

“So that is what I see as the future is a smart community, but the utility will be very much involved,” Rive said.

However, NV Energy is resisting change. “Warren Buffett suggested that non-solar customers have to pay more than solar customers in Nevada, in order to pay for the grid,” Rive said. “Solar is not a hardship; it is a net benefit.”

A study by Energy + Environmental Economics (E3), was presented to the PUCN in 2015, and shows solar as a $144 net benefit to all ratepayers. In contrast, a cost study completed by NV Energy said that Nevada net energy metering customers are being subsidized in the amount of $1,544.11 per month.

Rive argues that when solar is deployed, that infrastructure is adding value to the grid. But, because of the way utility companies make their money, by adding utility scale infrastructure, they can never admit that small distributive energy projects such as residential rooftop solar adds value.

The utilities claim they can purchase utility scale solar for 4.8 cents per kilowatt hour, which is true for new systems, but that figure does not take into consideration the cost of transmission and line loss meaning the amount of energy lost per mile to transport that power hundreds of miles to the end users.

“If you look at all of the utility-scale systems in service with over 300,000-megawatt hours that have been contracted across the U.S., the average rate is 13 cents per kilowatt hour. Then you add distribution costs and line loss on top of that; you are at roughly 15 to 16 cents per kilowatt hour. If you add all of the net metering customers together, you get about 150,000-megawatt hours with a net meter rate of about 11 cents without the distribution costs and line loss,” Rive said.

In the end, according to Rive, “State policies need change and move from just consuming energy to consuming cleaner energy. We have seen this in regulatory policy standards which starts forcing the transformation from burning coal and natural gas to renewable energy sources.

“But I think we are making a big mistake by putting our environmental future into the hands of a few companies. The biggest driver of innovation in any industry is competition. When you don’t have competition, the product will not evolve. So in order to have the grid evolve, you have to open it up and let the industry compete for it. Then amazing products will be created which would be a benefit to everyone. This is why distributed energy is so important.”