Skip to content
Sign up for our newsletter
section-ads_high_impact_1
BY BUCK WARGO LAS VEGAS BUSINESS PRESS
June 25, 2019 - 10:39 am 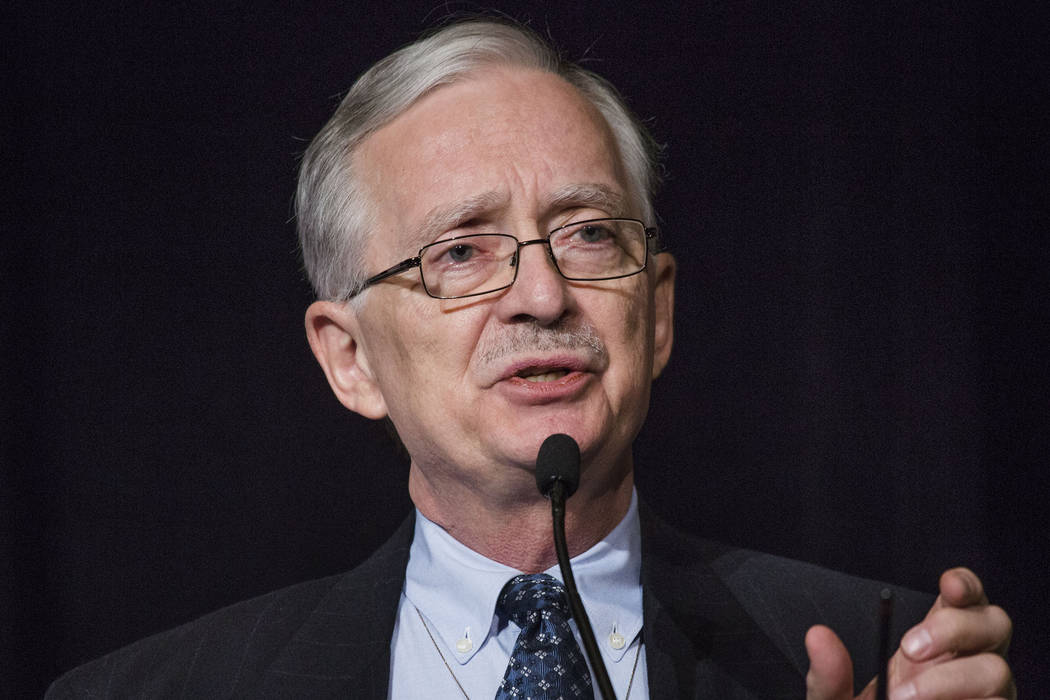 As a UNLV professor touted the strengthening of the Las Vegas economy through 2020, development heads of the valley’s three cities touted projects and opportunities that will spur job growth over the next decade.

The dual events took place Thursday with NAIOP Southern Nevada holding its monthly breakfast at The Orleans to hear from city economic development chiefs and the Center for Business and Economic Research Director Stephen Miller, who also unveiled his midyear economic forecast at the M Resort.

Gina Gavan the director of economic and business development with North Las Vegas, made a breaking announcement by disclosing plans for a hydrogen fuel cell battery plant that will be constructed at the Apex Industrial Park. The first phase of the project on 20 acres will have an $83 million investment and employ 50 people with high-tech jobs, Gavan said.

In the last 4½ years, North Las Vegas has had 10 million square of industrial development. In the next three years, there’s 15 million square feet of industrial development in the valley’s pipeline and most of that is in North Las Vegas, she said. Gavan said there’s plans for homebuilders to construct 15,000 homes in the city in the next five to eight years.

“North Las Vegas has come a long way,” Gavan said. “At one point during the recession, one of every three homes was in foreclosure and people were out of jobs because we’re a blue-collar town. We have made strides. We have got a lot of major public homebuilders, and we have seen Craig Road explode with light industrial and amenities. North of Craig Road we have a different reputation, and we have some work to do with the in-fill areas.”

Bill Arent, director of economic and urban development for Las Vegas, said the city has a hidden asset in the northwest, north of the Paiute reservation, that’s dedicated to economic development and commercial and light industrial projects.

In the upper Las Vegas Wash north of Skye Canyon the city has put out a request for proposals to develop 1,100 acres that would include not only residential but commercial to bring in large employers, including for light industrial. The Las Vegas City Council will get two proposals and review the plans in the next two to three months and select a partner for development that could start within the next 24 to 36 months and take seven to 10 years for a build-out, he said.

Arent told the commercial development industry to keep an eye on future uses at Neonopolis, including one that could be “transformative.”

Ken Chapa, interim director of the office of economic development and tourism in Henderson, touted the commercial development in West Henderson with manufacturers and the Raiders practice facility. He said Water Street in downtown Henderson “is on fire” with businesses relocating there and spurred by catalysts, including the Golden Knights hockey arena.

“We’re seeing that diversity of new jobs coming into the market that helps us with our goal to diversify who we are and what our assets are,” Chapa said.

As part of that diversification, Google’s plan for a $600 million data center under construction near Warm Springs Road and Boulder Highway will be transformative, Chapa said. The Boulder Highway corridor also will have commercial, retail and mixed-use opportunities.

“The next step you will see will be all of these tech companies storming in now because the backbone is there,” Chapa said. “We will see the benefit of catalyst project moving in, and hopefully we will see more investment from tech companies that we are going after from 25 to 150 employees and larger ones along the way.”

Even without offering incentives after three to five years, Nevada “burns every state on the West Coast,” Chapa said. The asset management people see that, he added.

“The one thing we have against us is the workforce (development), but we’re addressing that,” Chapa said. “We’re making that side of the business case stronger and stronger.”

Chapa said people shouldn’t dismissed the importance of call centers. Many other cities started with them, and they’ve proven to be a great training ground for the next level of managers, he said.

As for other opportunities in Las Vegas, Arent said the office market hasn’t recovered completely since the Great Recession, and the city is trying to help that along by working with tenants to get them into downtown offices.

“We’re doing small investments and grants for multifamily projects and grants for office tenants coming into assume vacant office space,” Arent said. “We realize we can’t get new offices downtown until we take care of these existing assets.”

Casino development continues to add to downtown’s vitality, and the city continues to invest in downtown with not only infrastructure but with projects like the expo under construction for the World Market Center that will open in 2020. There’s also an investment for a new canopy at the Fremont Street experience, Arent said.

Las Vegas continues to go after technology companies to locate in the city, adding “we’re going after the big boys” without disclosing any details. “We’re taking a risk as a city that you see more mature cities around the country do. That speaks volumes when working with companies working with Las Vegas,” Arent said.

In his presentation at the M Resort, Miller said there’s no indication of any recession, but there are some signs of weakening in the national economy.

There continues to be concerns about slowing economies across the world and a trade war with China over tariffs could weaken it and spread to Nevada.

“I don’t see a recession in the near-term even though some signals may be wavering a bit,” Miller said. “The key is what happens with China. If we get a positive resolution on that, I don’t think a recession is in the cards. However, if trade talks collapse, and the U.S., and China get into a game of pushing up tariffs, a recession becomes more likely.”

Miller said based on their assessment of the international and national trends, the Southern Nevada economy “will continue to see improvements in 2019 and 2020.

“We anticipate that the economic growth in the Southern Nevada economy will generally outperform the national economy since we started our local recovery later and from a much deeper hole than faced at the national level.”

Miller said he expects the Southern Nevada population will grow by 2 percent in 2019 and 2020.

Miller projects personal income in Southern Nevada will grow 6 percent over the next two years.