Skip to content
Sign up for our newsletter
section-ads_high_impact_1
By Buck Wargo Special to the Las Vegas Business Press
June 5, 2016 - 8:00 pm 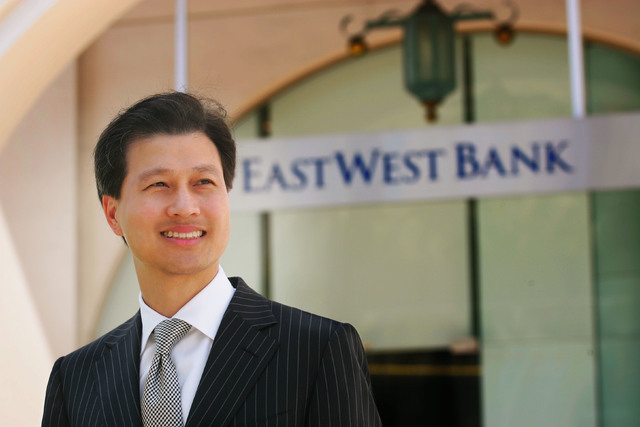 Dominic Ng, CEO of East West Bank, sees a bright future for Asian investment in Las Vegas. He is photographed outside the bank's office in Pasadena. (Courtesy/photo by Ringo H.W. Chiu)

Dominic Ng and his East West Bank have placed a bet on Las Vegas, and he sees it paying off big.

The Southern California-based bank that caters primarily to Asian-Americans, opened its first and only branch on Spring Mountain Road in Chinatown two years ago and was profitable in its first year, according to Ng, its chairman and chief executive officer.

Today, the Las Vegas branch has $179 million in deposits among its 1,100 customers and has total loans of $125 million. Some of its named clients include Chenco International Investment Corp. and Lee’s Liquor.

What started in 1973 as a savings and loan targeting the Chinese-American community is now an international bank with more than 130 branches from the East Coast to the West Coast and branches in Hong Kong and China. It ranks among the 25 largest banks in the U.S. with assets of $33.1 billion.

It’s those Asian connections and relationships that Ng said could help businesses relocate to Nevada.

“I have witnessed some of our customers who have been California residents for many years and who have moved to Las Vegas because they don’t want to pay 13.5 percent state tax,” Ng said. “They look at Las Vegas as a viable alternative for lifestyle and day-to-day living. The summers get a little hot, but some of them have summer homes somewhere else too.”

Ng is a native of Hong Kong and a University of Houston graduate. He became the head of East West Bank in 1991 after working at the Deloitte &Touche accounting firm. Forbes named Ng as one of the 25 most notable Chinese-Americans.

California and New York continue to get a lion’s share of the attention from those who’ve migrated to the U.S. from Asia, Ng said. It’s an evolving process in which they first go to a place where they feel safe with their investing such as in New York, Los Angeles and San Francisco, according to Ng.

“You give them two to three years to hang around and keep investing, and they see the prices are going up,” Ng said. “They see it’s getting more and more expensive, and they say they didn’t know the labor laws were like this, and they didn’t know they were taxed like that. They try to get a permit and it takes six to nine months. Suddenly, they became Americans and start complaining the same way as Americans. Then they start looking at alternatives once they get comfortable. We will see more and more Asian-Americans moving into Las Vegas. We think naturally with our brand being the largest and most respected Asian-American bank, we will get our lion’s share of business.”

East West Bank has done business in Las Vegas for the past 20 years, long before it brought a branch to the city, Ng said. Many clients based in California had development projects and investments in Las Vegas but East West Bank couldn’t open a branch relying on 20 to 30 customers, he said.

“Without a branch in Las Vegas, we have never been able to get the deposits,” Ng said. “For years, we had thought about whether we should open a branch in Las Vegas. One of the issues in the past is that it wasn’t that much business to open a branch out of state because, keep in mind, 20 years ago and 10 years ago we were only California-centric. Since 2009 we were fortunate to acquire another bank (United Commercial Bank) in California that had branches in Seattle, Boston, New York, Atlanta, Houston and even Hong Kong and Shanghai. We were already out of state anyway and now the whole idea of going to Las Vegas makes perfect sense.”

East West Bank opened the Las Vegas branch in April 2014. Ng said it usually takes two to three years for a strong branch to make a profit and five years before many others do so. Las Vegas was profitable in its first year.

It helped that existing customers made referrals and the retail branch in Chinatown where people shopped attracted new customers, Ng said. East West Bank has a reputation for serving Chinese-American customers and with more Asian immigrants moving to Las Vegas over the last decade, that has created a bigger customer base to draw from, Ng said.

“It just shows how strong the Las Vegas market is and the pent-up demand because we already have clients there,” Ng said. “It makes it so easy. Clients said of course we’re going to move deposits to you, and we are going to do more banking with you because we’ve already been doing business for the last five to 10 years or so.”

Hae Lee, the owner of Lee’s Discount Liquors, said he moved his accounts to East West Bank a year ago. Lee got to know Ng and said his bank offered a great package and great service.

Lee’s Liquors uses East West Bank for operating accounts, credit card transactions and loans. Lee’s has 17 stores in the Las Vegas area, one in Mesquite and plans to open a 19th in Northern Nevada.

“They were new to the area, and we decided to make the move,” Lee said. “They were a very large bank, and I was impressed with their assets.”

The vast majority of the bank’s Las Vegas retail customers are Chinese-Americans. While on the business side, 60 percent of the business comes from non-Asians, Ng said. It takes time to develop those relationships but that figure among Asian-Americans will grow, he said.

Most business loans deal with commercial mortgages and sometimes equipment purchases, including loans to doctors. Most business customers are in the real estate business, but Ng said East West Bank needs more investments coming into the state to expand into other commercial banking businesses.

Ng, whose bank does business with a Faraday sister company, said that’s just the first wave of Chinese investment in Nevada. Companies from mainland China looking at not only electric cars but clean energy and other manufacturing will consider Nevada because of its low taxes, lower labor costs and strong business climate, especially compared to California.

“I have plenty of discussions with businesses and one entertainment business from mainland China which is looking at building a studio or manufacturing plant in Nevada because they feel the labor costs and business climate are all pretty good,” Ng said. “It’s too new at this point, but I would expect in the next 10 years it will be a tremendous opportunity. We believe setting our branch in Las Vegas will be a pretty good value proposition simply because the growth opportunities will be higher than other states.”