Skip to content
Sign up for our newsletter
section-ads_high_impact_1
By Jim Pawlak Special to the Las Vegas Business Press
December 13, 2015 - 7:53 pm 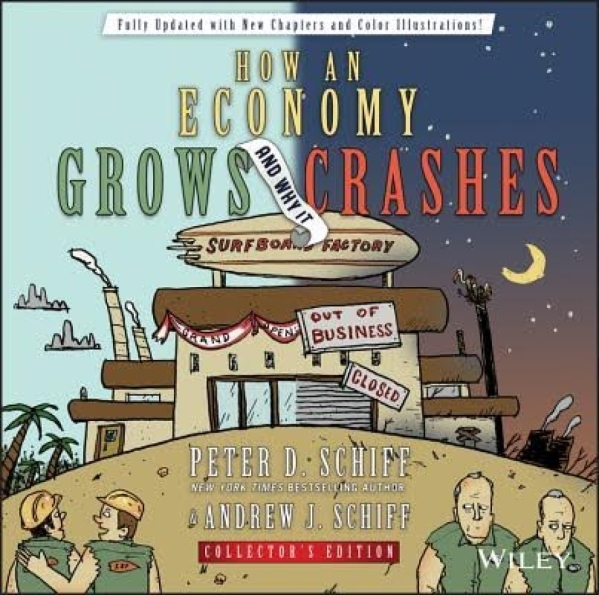 How an Economy Grows and Why it Crashes DEC 2015

“How an Economy Grows and Why It Crashes” by Peter Schiff and Adam Schiff, John Wiley & Sons, $34.95

Imagine three guys on a tropical island eeking out an existence by catching fish bare-handed. Then one invents the fishing net. The inventor loans the extra fish he catches to the other two while they make their own nets; the loan is repaid in fish two for one. Three lives are changed because fishing goes commercial.

Attracted by this growing industry, other residents come to the island. While many fish, others provide services to the fisherman and their families.

Prosperity booms as consumer spending grows; in the background, the roles of banking and government expand. With hut options limited, the cost of huts spirals. High mortgage payments see more islanders living from paycheck to paycheck and using credit to excess. Inflation begins because the government keeps printing “Fish Reserve Notes,” increases taxes and goes into debt to fund its projects and the agencies needed for oversight.

Using the simple, yet complex, island economy as a metaphor, the Schiffs stress the human aspects over the dizzying array of charts and graphs most economists use to “explain” economics. With wry humor and illustrations, they teach Econ 101. Learning highlights include:

• People get rich only by providing something of value to others. If the net inventor had not loaned fish to the other guys so they could eat while making their nets, they would still be catching fish bare-handed. All three profited from the loan.

• Advances in productivity allows for expansion into other areas — and more leisure time. The three soon built a mega-fish catcher that catches more fish than they can consume. They created an export business. One began building surfboards so he could be the big kahuna of the waves; it evolved into a surfing school. Another began creating designer leaf-ware for island residents and tourists; the third worked on canoes and carts for transporting fish and people.

• Save, save, save! Savings shield people and economies from the unexpected. By under-consuming, people build wealth needed to maintain their living standards in the event of job loss or retirement. From the economy’s standpoint, savings (i.e. reinvested profits) create business growth and economies of scale that make goods available to more people at lower prices.

• The role of a bank. Loans on the island are predicated on risk. The borrowers with savings and good credit ratings get the lowest rates. The rates on the loan portfolio determine the rates paid on savings accounts and longer-term deposits. As banked savings swell, loan rates drop — money in the vault won’t generate profit. The bank monitors credit quality because relaxing credit standards will ultimately increase defaults.

On the island, interest rates rise and fall based upon supply of money and the demand for loans. The banks know that artificially low rates actually encourage borrowing/consumption and discourage savings.

The tipping point comes when a large sector of the economy collapses (i.e. fishing industry, hut building) and businesses/consumers can’t repay their loans. Banks founder. Government intervention, in the form of make-work projects drive up the deficit. Loans are made to troubled industries deemed too big to fail with the knowledge that the taxpayers won’t come out whole — which leads to either higher taxes or higher deficits.

• Key takeaway on inflation. When a government’s deficit increases, the value of its currency goes down. The three results: 1. Wages and prices go up because it takes more money to buy what you used to buy. 2. As prices increase, the incentive to save goes down — why save when the things you want will cost more tomorrow? 3. Those on fixed incomes find that their retirement nest egg won’t last as long as they’d planned.

The Schiffs simplify economics by explaining cause, effect and things that interfere with market forces.