Skip to content
Sign up for our newsletter
section-ads_high_impact_1
By Craig A. Ruark Special to the Las Vegas Business Press
February 12, 2016 - 1:36 pm 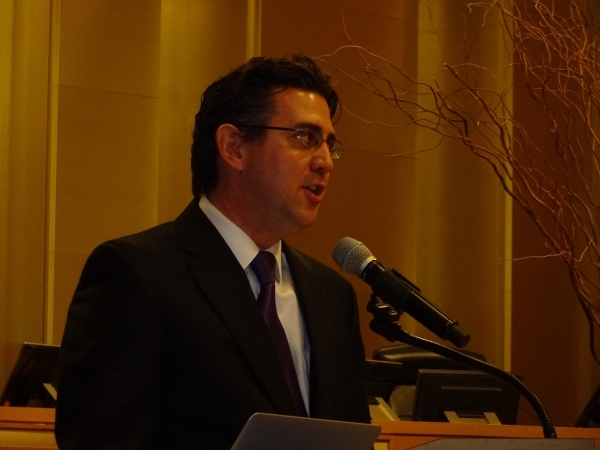 Jeremy Aguero of Applied Analysis tells a philanthropy conference volunteer hours are up sharply across the Las Vegas Valley. (Craig A. Ruark, psecial to the Las Vegas Business Press)

The aphorism “A rising tide lifts all boats” seems to be the theme for Las Vegas Valley nonprofits during this first quarter of 2016.

Led by founder and CEO Julie Murray, the Moonridge Group surveyed large corporations and small businesses in Nevada to determine the amount of funds and donated time given to charities, the types of charities and causes, and the expected returns on those charity investments.

The statistical results of the survey were presented by Jeremy Aguero, principal analyst at Applied Analysis, who gave a guardedly optimistic report.

While encouraging people to think more about corporate philanthropy, Aguera explained, “People have started counting things that they had not counted in the past. So while some of the numbers presented may seem like a huge leap forward, it may be a result of better and more meticulous accounting by the companies that are doing the giving.”

At the top of the list and perhaps the seemingly most impressive figure is the number of volunteer hours reported. In 2015, it reached 445,000, up sharply from last year’s 260,000.

Just as the decision-making process has changed, so has the priority for the types of charities. Where health and social services used to dominate the pie chart, it now occupies just 26 percent. The leader is education at 44.2 percent with 25.8 percent of that going to higher education. One hundred percent of the companies surveyed cited education as a key element of corporate philanthropy, reflecting the fact that education is the key to a better workforce and to attracting a more diverse business economy.

“Education is the silver bullet,” said Aguero. “Education is an underlying element that corporations can default back to because it deals with their bottom line and because the return on investment is clear, consistent and far-reaching,” cited Aguero.

Survey participants were asked to explain their “most important factors in giving,” and the results (in the order of importance) seemed to run along the same lines of most business decisions:

Not surprising, a national study found that women are more charitable than men at every income level. Predictions are that women are expected to inherit 70 percent of the $41 trillion in intergenerational wealth transfer that will take place over the next 40 years. Estimates are that by 2025, 60 percent of U.S. billionaires will be women.