Skip to content
Sign up for our newsletter
section-ads_high_impact_1
By Craig A. Ruark Special to the Las Vegas Business Press
December 19, 2015 - 11:18 am 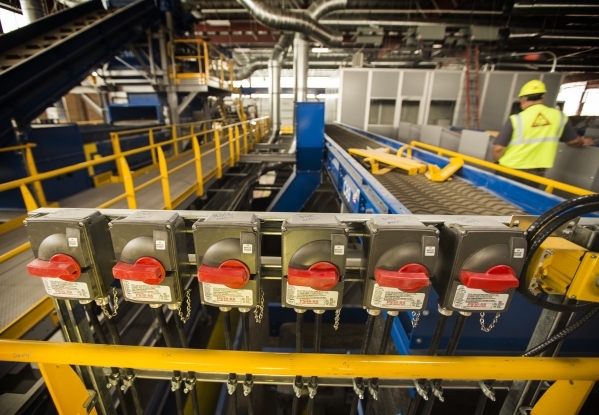 The all-too-common photos of garbage dumps filled to capacity, nearly overflowing with plastic trash bags, put a visual explanation point on the fact that Americans produce a lot of waste.

That being said, the recycling movement started several decades ago by hard-core environmental activists to help save the environment is now becoming a necessity as we start running out of places to dump the accumulated waste.

In the Las Vegas Valley, both household participation rates and the amount of material being recycled are increasing. And for businesses that recycle, they are able to see a significant cost saving on their monthly bill from Republic Services.

The majority of office waste, 75 percent or more, consists of paper products and plastic water bottles, both valuable commodities sought by waste recycling companies. By implementing a recycling program, a business can decrease the amount of its annual garbage collection bill by adding one or two less expensive recycle bins and eliminating multiple trash containers as well as reducing the number of trash pickups.

The cost of a standard 3-cubic-yard container with two pickups per week is $288 per month. The charge for a once-a-week pickup is only $144. In contrast, the cost of a 3-cubic-yard recycling container is around $130 per month, for two pickups per week. It is possible for a business to save $3,000 to $5,000 per year on trash removal by establishing an office building-wide recycling program.

The two challenges for business recycling are making sure that each employee participates and that the recycling stays clean, meaning that food-contaminated trash must be kept out of the recycle stream.

According to Bob Coyle, a government relations and recycling consultant for Republic Services, all of the hotels in the resort corridor and downtown Las Vegas participate in recycling.

Outside of the resorts, Republic serves about 20,000 commercial businesses, and of that number, there are about 3,500 recycling customers. But among those 20,000 businesses, there are auto repair shops, restaurants and other type businesses that don’t generate a lot of recyclable material because of food waste, grease and oil contamination. Because Republic does not break out office buildings separately,”we feel that the current business recycling customer base is a pretty good number, and we have significantly penetrated the available market,” Coyle said.

As a business, one of the advantages of recycling is the appeal to the environmentally conscientious customer who is looking to do business with companies that care about the environment.

The largest gain in recycling participation has come from individual residents.

Before 2009, each residence was provided with three “milk crates” — the familiar red, white and blue containers that hold 12 gallons of recyclable material each for a total of 36 gallons of capacity. The crates took up a lot of storage space in the garage, compounded by the fact that they were emptied every other week only and required three trips to the curb on recycling day. Also, the containers were open and on windy days were a challenge to residents to keep the paper and plastic contents from blowing away.

And those residents that had watched the recycle truck go through the neighborhood were frustrated by the fact that they took the time to separate the paper, plastic, and glass material, only to have it all co-mingled in the recycling truck. Needless to say, participation in the recycling program was low.

In just those two cities, “We have seen roughly a 500 percent increase in recycling,” Coyle said. “We used to get 2 to 3 pounds per week on average per home, and now we are seeing between 12 and 14 pounds on average per home.” The reason for the increase is convenience.

Under the single-stream recycling program, each home receives a 96-gallon container with wheels and a lid that is emptied on a weekly basis, nearly tripling the recycling capacity and convenience to the residents. Because of the weekly collection of a single bin on wheels and the elimination of recycling day confusion (on the same day as normal trash pickup each week), Republic Services has seen an estimated 90 percent participation rate.

But the capacity issue has been resolved with the Dec. 2 opening of a new 110,000-square-foot recycling center with advanced recycling technologies. The new recycling center is capable of separating and processing 70 tons per hour, up from the 25 tons per hour capacity in the old building. The new facility was designed and constructed based upon estimated valley-wide recycling needs, about 150,000 tons annually based upon the current population, and the estimated growth in recycling for the next 10 to 15 years and the ability to process up to 265,000 tons of material annually.

Coyle said, “That all depends on what is happening with the medical marijuana business applications. Our agenda item has been pushed back a number of times due to the soccer stadium at the tail end of last year and on-going medical marijuana licensing issues this year.”