Skip to content
Sign up for our newsletter
section-ads_high_impact_1
By Kim MacQuarrie Special to the Las Vegas Business Press
September 27, 2015 - 6:53 pm 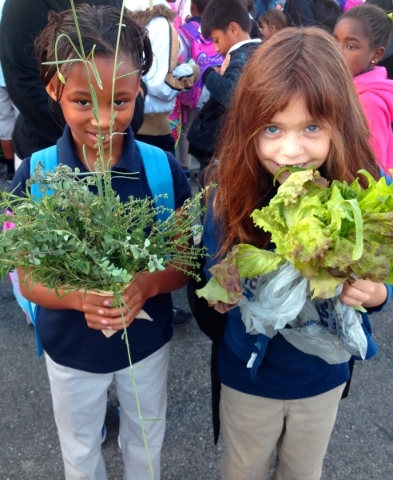 If you happened to pass by John S. Park Elementary School near Charleston and Maryland on any Tuesday morning during the last school year, you would have thought you had stumbled upon a student protest of some kind —students out on the sidewalks waving banners and signs and shouting out to the parents dropping other students off at school.

However, if you took a closer look at the signs and banners — many painted in garish reds and greens — you’d see that this was not a protest but that the signs sported hand-drawn vegetables and the students were shouting slogans like “Okra! A dollar a pound!” Or, “Kohlrabi! $2 a bundle!”

The basic premise of the program is to teach students how to create and run their own farmers market. At its most extraordinary, it’s a revolutionary way to combine health, science, math and nutrition lessons — with business skills. Students use the produce from their school garden to launch a business that opens its doors to the public at harvest times and at schools with big gardens like John S. Park, that can be as often as once a week. Perhaps the most extraordinary thing about it is that it’s a business run by eight to 11-year-olds.

The Farm-preneur Program began as a solution to a problem that a local nonprofit, Green Our Planet, ran into in the fall of 2013. Green Our Planet is a conservation organization that runs a free crowdfunding platform for green projects and part of its mission is to help local schools fundraise so that they can install “Outdoor Garden Classrooms.”

These are typically five or six raised garden beds complete with soil, seeds, and automatic irrigation built by a local farming company, Garden Farms. They are used as natural laboratories where students can be taught STEM subjects (science, technology, engineering and math) outside. Numerous studies have shown that “hands-on,” experiential learning is one of the most powerful ways a student can learn.

By early fall of 2013, Green Our Planet had helped roughly a dozen schools obtain gardens, the gardens were planted and the students were learning. By mid-fall, however, more and more teachers began to ask: “What do we do with all of the vegetables?”

In order to devise a sustainable answer to that question, the Farm-preneur program was born.

Kat Coveney, a GATE teacher at John S. Park Elementary School in downtown Las Vegas, was the first teacher to step forward to help design the program. “I believe in allowing students to figure out the solution to problems,”Coveney says.

This year, she has moved on to become a GATE facilitator in the CCSD. “And so when I asked whether they would like to create a farmers market, it was then up to them to figure out how to do that: from how to present the food to their customers, the kind of advertising they wanted to do, how to create their profit and loss sheets, what to plant in the garden in order to make the most money, and so on. It was a bit chaotic at first, but since then it’s turned out to be a tremendous hands-on learning experience for students.”

“It took off like wildfire,” says Ciara Byrne, co-CEO of Green Our Planet. “We had so many requests from so many schools that we realized we needed to make it into a program. That’s when together with teachers like Kat Coveney we came up with the idea of “Farm-preneur”—combining a traditional school garden program that also allows students to create their own business model from it.”

Around this same time, Green Our Planet, together with the nonprofit food bank, Three Square, was awarded a $65,000 grant from the American Honda Foundation. The purpose of the grant was to create Nevada’s first pre-K-5thgrade curriculum that allows teachers to teach science in their school gardens.

The two nonprofits hired 12 CCSD teachers and three local farmers from Garden Farms to create the lessons, which they did over an eight-month period. Each grade was themed — second graders study “Bug Detectives”; third grade coversthe “Science of Soil” and so on. When it came to 5th grade, it was a unanimous decision that, along with a unit on food justice, the curriculum would revolve around the creation of a farmers market — complete with a business model, advertising and marketing plans, etc.

“What better time is there to learn about how a basic business actually works,” says Coveney,” than to begin in elementary school?” Zappos CEO Tony Tsieh, after all, began his own business career by creating a worm business while in elementary school. Ben Franklin was a printer’s apprentice at 12 and founded his own newspaper at 15. Elon Musk, of Tesla and SpaceX fame, taught himself computer programming at 10 and sold his first video game at 12. Now he is preparing space ships that he hopes will lead to the first human colonies on Mars. So why not farm-preneurs?

Part of the business model of the gardens is that many of the day-to-day expenses are sponsored by local corporations. John S. Park School, for example, has a memorial garden that was built by the Sportsman Family to honor the memory of Jacob Sportsman and now the garden is sponsored by downtown local eatery, Vegenation.

In 2014-2015, 26 CCSD schools organized and carried out farmers markets, using the proceeds to re-invest in their garden programs. More schools try the program each year. Green Our Planet, which has recently helped to install its 75th school garden and has a waiting list of 30 more schools, is helping to expand the school markets.

This past summer, chef Brett Uniss, formerly at Honey Salt and now the executive chef at Andiron, tasted the cherry tomatoes grown at Gibson Middle School and said “I’ll take as many as you can grow! I just love buying vegetables that are grown by the students in our school district. It’s a very exciting movement happening within our community.”

Kim MacQuarrie is a writer, a four-time Emmy-winning documentary filmmaker, and a social entrepreneur. Together with Ciara Byrne, he co-founded Green Our Planet in 2013. Green Our Planet operates a free crowdfunding platform that can be used to help fund any green project anywhere in the world.