Skip to content
Sign up for our newsletter
section-ads_high_impact_1
BY BUCK WARGO LAS VEGAS BUSINESS PRESS
May 5, 2020 - 9:24 am 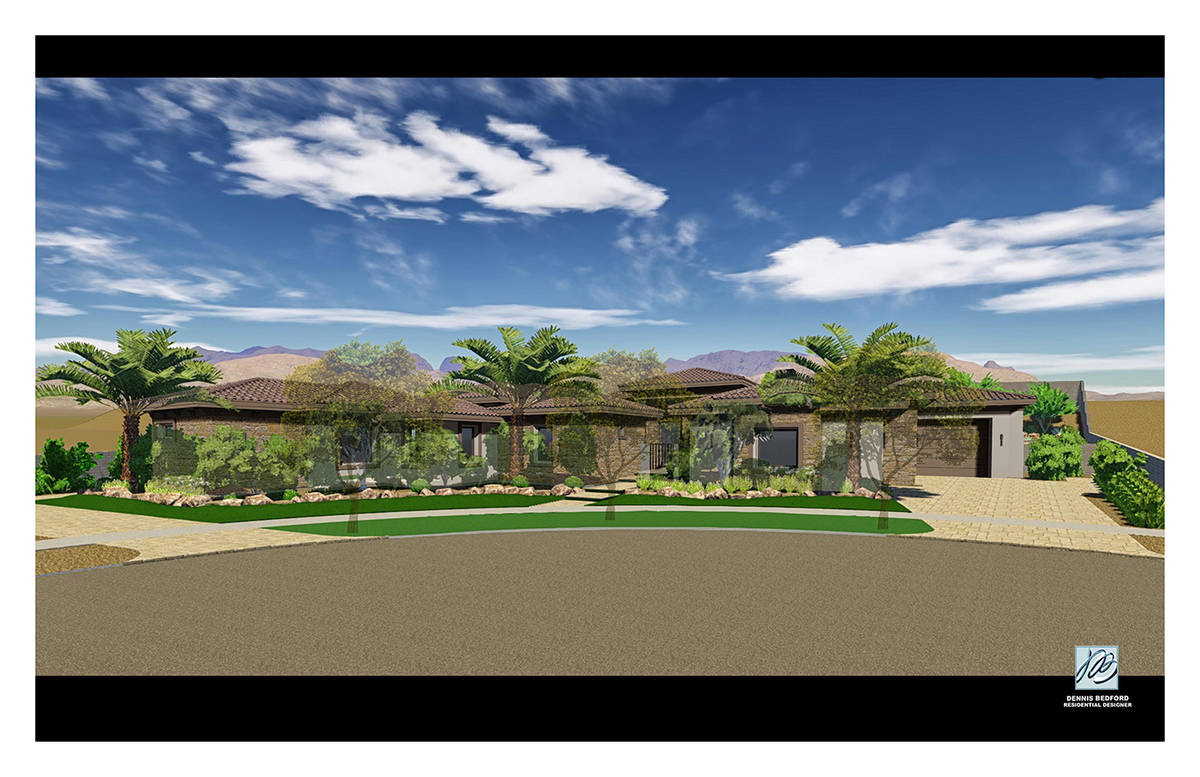 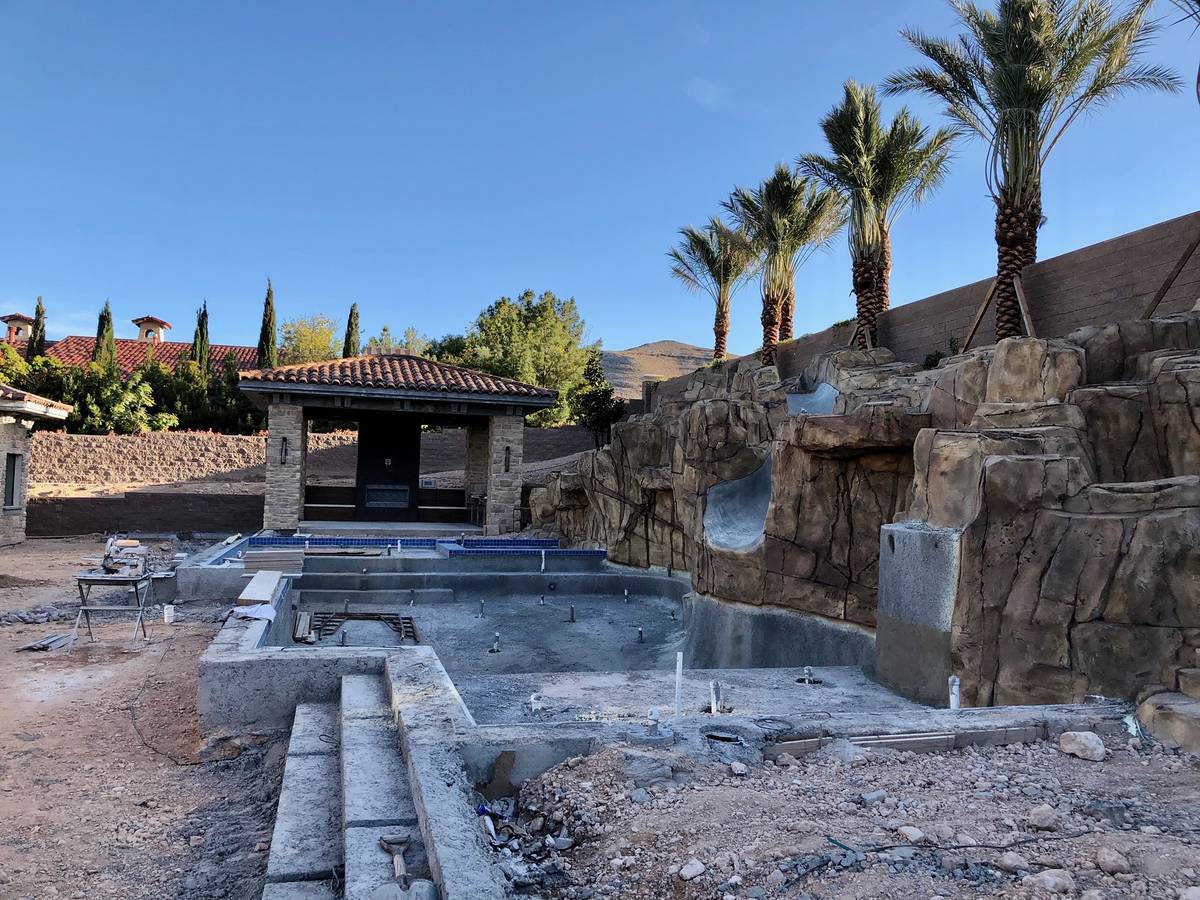 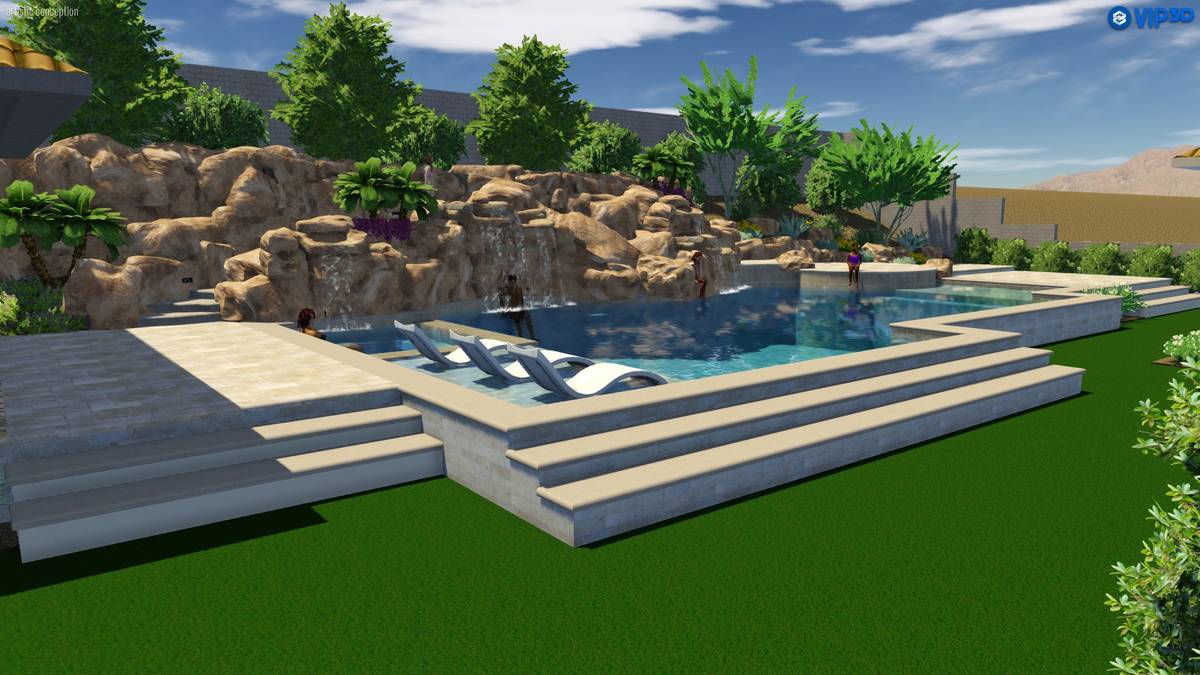 This rendering shows the Southern Highlands home that is being built for a former NBA player Jordan Farmar. (Domanico Custom Homes) 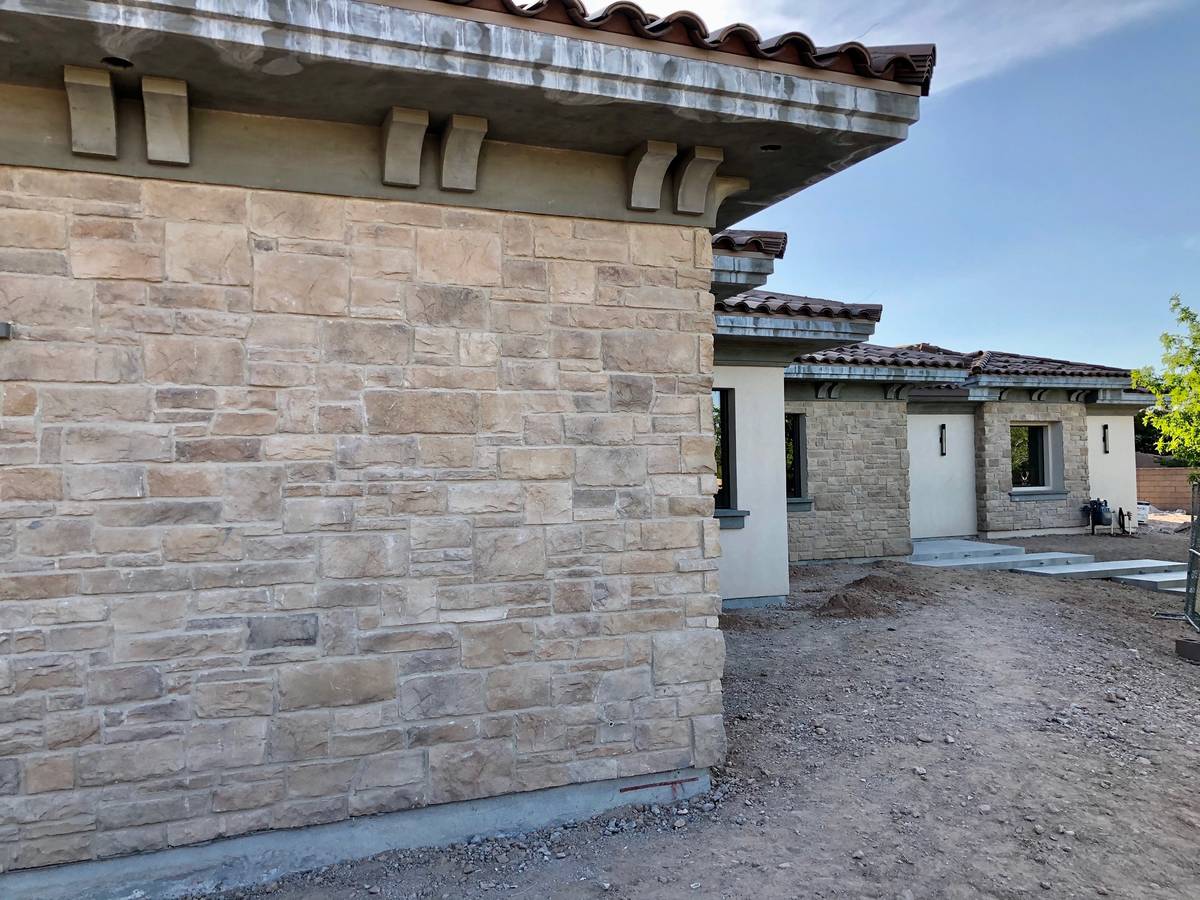 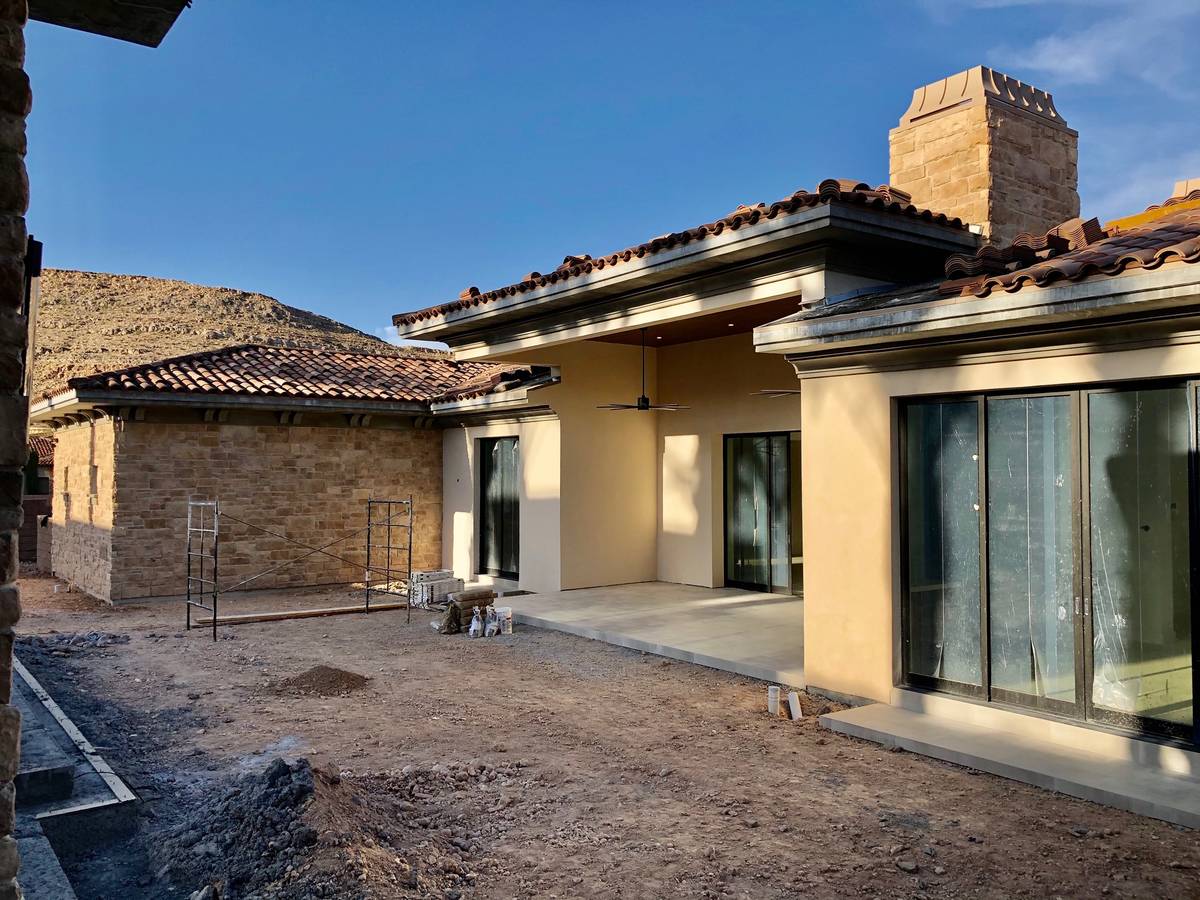 The home is expected to be completed in May. (Domanico Custom Homes) 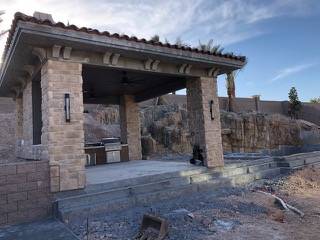 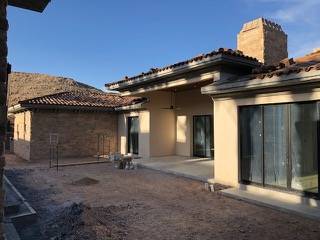 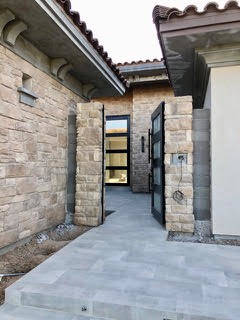 The home has a five-car garage and casita. (Domanico Custom Homes)

Jordan Farmar, a former NBA player and two-time champion with the Los Angeles Lakers, loves calling Las Vegas his home for the last six years. He now has a hand in building his own.

The Los Angeles native, his wife, Jill, a former professional soccer player, and their two daughters will be moving into their new home in Southern Highlands in May.

Domanico Custom Homes is constructing the home valued at $3.5 million, and Farmar and his new carpentry skills have helped it along.

The 33-year-old Farmar, who is retired from the NBA, lives in Southern Highlands in a home he has occupied for the last few years. Before that, Farmar bought the 2016 New American Home in MacDonald Highlands in Henderson, which was showcased at the International Builders’ Show in Las Vegas. He lived there for less than a year before moving back to Southern Highlands in a 4,000-square-foot home.

“I moved to Vegas (as a tax shelter) while I was still playing,” Farmar said. “The more we stayed out here, the more we fell in love with it and the less I wanted to be in Los Angeles. Now I don’t like to go there at all. I go there and handle my business and come back as soon as possible.”

Farmar said he chose Southern Highlands, which he called a “hidden oasis,” because he loves its fully grown trees. Its proximity to the Strip, Interstate 15 and McCarran International Airport makes it an ideal location as well, he said.

“As soon as I get out of the community, I’m on the 15 freeway and go anywhere I want in town from there,” Farmar said. “There’s no traffic and amazing sports and shows and entertainment and then go back home in 10 minutes and be hidden in Southern Highlands. It has everything L.A. has to offer without having to deal with the things I don’t like — the state taxes, the traffic and craziness of people.”

Farmar said the lockdown caused by COVID-19 hasn’t had a big impact on him and his family. He said feels for those who are unable to work because of the shutdown. Farmar is the owner of Dream Adult Day Care, which closed like other businesses because of the coronavirus. He also owns an apartment building in Southern California and a CBD manufacturing and distribution company, CBDfx.

Farmar is awaiting his new one-story home on a half-acre lot on Chalk Hill Court, which will be done in May. It measures 6,550 square feet and has three bedrooms with a classroom between his daughters’ bedrooms for home schooling. It has a theater just off the kitchen, a yoga/workout room, a five-car garage and a casita in the front portion of the home for friends to stay in.

Farmar has played a role in its construction, which he called rewarding, and he’s excited to move into a home where he and a friend built the woodwork, closets, vanities, kitchen and cabinetry.

“That’s pretty unusual,” said Ernie Domanico, the builder’s founder. “I’ve never had a guy in this price range that was able to do what he did. The cabinets are beautiful. You don’t find a basketball player (who) builds his own cabinets and does a fantastic job. Some people don’t understand construction at all, and he totally gets it.”

Farmar said he took up carpentry as a hobby two years ago and with a friend helped build his kitchen before deciding to do Farmar’s home.

“It is more rewarding because I know every nook and cranny,” Farmar said. “I have been there every single day for the past year while it’s being built.”

The home has a transitional contemporary open design on the inside. The living room has a 16-foot ceiling. There’s walnut cabinetry and black finishes for door handles and plumbing fixtures. The walls are white with a Santa Fe finish to make it more homey and have character, Farmar said.

The home has a Mediterranean feel on the outside that fits in with the neighborhood with a clay roof and stone on the exterior and stucco. The backyard has a covered pavilion.

“It has a $350,000 pool in the backyard that’s just beautiful,” Domanico said. “The lot behind his house is 15 feet higher, so he has a big hill, and we built a pool into the hill. He has a big slide for his kids and waterfalls and places to drop off. It’s something. Most people say it reminds them of one of the pools at a hotel.”

Farmar said his favorite room is the movie theater, which has two levels. It will have a 130-inch screen and two large couches to sit at least a dozen people.

“It will be my space to go and relax and watch shows and sports when those finally come back,” Farmar said.

The housing market has slowed since the onset of COVID-19, but that doesn’t mean activity has halted.

Homes are closing and construction is continuing, even though sales slowed in April and a greater number of buyers canceled.

Domanico is not only finishing up the Farmar home but is two months away from completing another luxury home in Southern Highlands. This one is a spec home with no buyer in mind.

On Monday, Domanico plans to start construction on a second spec home in the master plan. The two-story home will measure 6,100 square feet and will have a transitional contemporary design. It will have five bedrooms (two of which can be for other uses), a pool and a spa. It will be listed for $3.2 million.

Domanico said most of the spec homes he builds are $2.5 million to $4 million, which is in the biggest demand.

Domanico said he has buyers continue to look at his nearly completed spec home in Southern Highlands. However, that doesn’t mean he’s not a little nervous about selling it while there’s a global pandemic ongoing.

“I’m 72 and have seen everything,” Domanico said. “I have been through the (2008 economic collapse and Great Recession). We’re still having interest. I’m going to go ahead with another home. If you wait, construction financing will only get more expensive, and they will only lend us less money. I’m not going to go out and spec three houses at the same time. I got controlled aggression.”

The economic collapse in 2008 and the Great Recession halted his homebuilding business. He didn’t start building again until 2013.

Domanico said he has two other lots in Southern Highlands where he plans to build spec homes, and those are undergoing architectural review. He said he’s not in a hurry to start them and wouldn’t start until he sold the one nearing completion.

Darin Marques, a luxury Realtor with Huntington & Ellis, is listing the nearly completed two-story home at 39 Vintage Canyon St. for $4.5 million. It measures 6,750 square feet and has four bedrooms along the Southern Highlands Golf Club.

Marques said Southern Highlands has become more of a destination for athletes with the relocation of the Raiders and their practice facility nearby in Henderson. Raiders coach Jon Gruden and quarterback Derek Carr are building homes in Southern Highlands.

Domanico also has deposits to build two homes in the Summit measuring 8,000 square feet each and costing $1,000 a square foot.

Domanico has been building in Las Vegas since 1974. After graduating from college, he bought a vacant lot as a real estate investment and instead decided to build a custom home that earned him a $3,000 profit. He became a licensed general contractor in 1979, specializing in custom homes and has built more than 100, which are spread out in Southern Highlands, Spanish Trials, Spanish Hill, Red Rock Country Club, Seven Hills and MacDonald Highlands.

Prior to the recession, Domanico built a 13,000-square-foot house that was sold to Gavin Maloof for $10 million in Southern Highlands. It had six bedrooms, an elevator, a 10-car garage, a pool, a waterfall and a putting green.