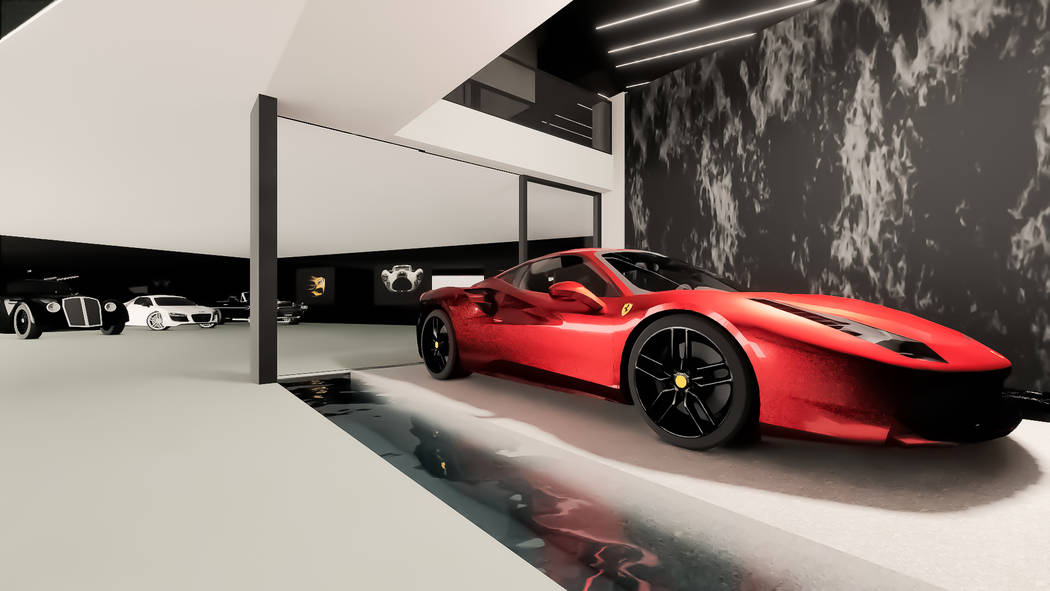 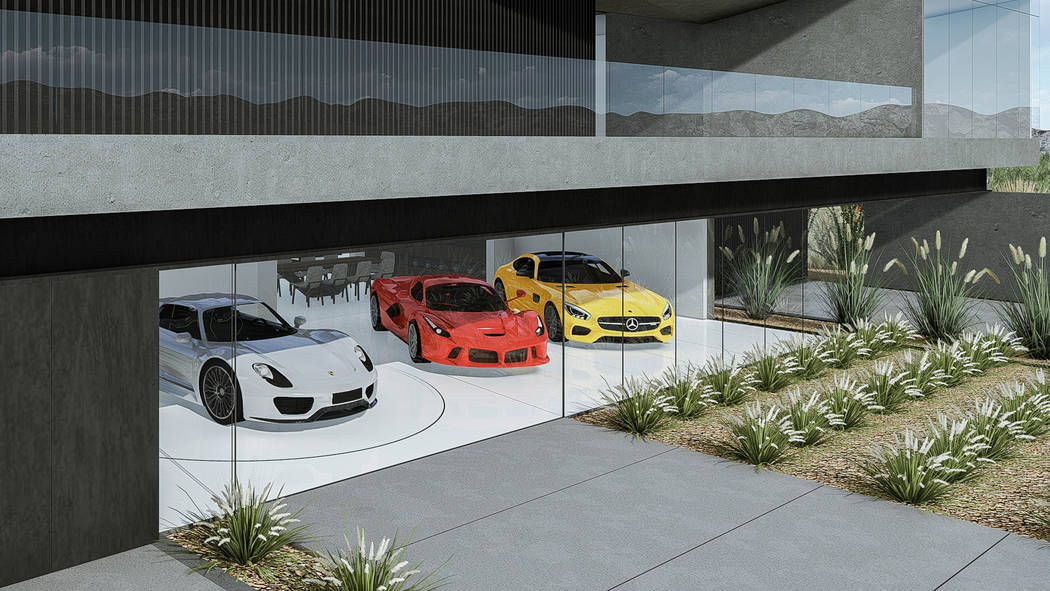 This artist's rendering shows a Blue Heron home with a garage that can show off its owner's expensive cars. (Blue Heron) 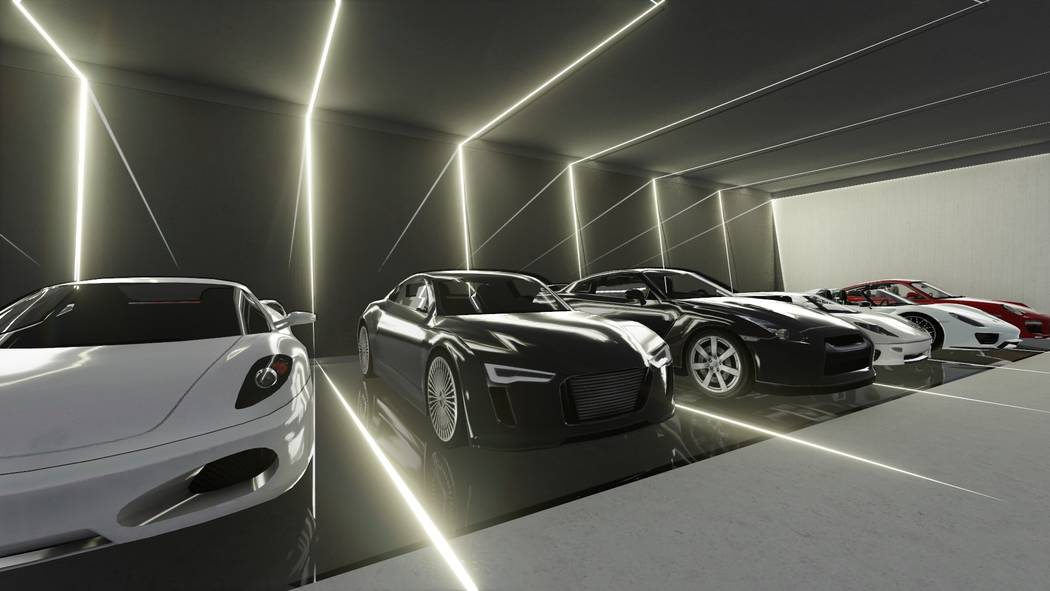 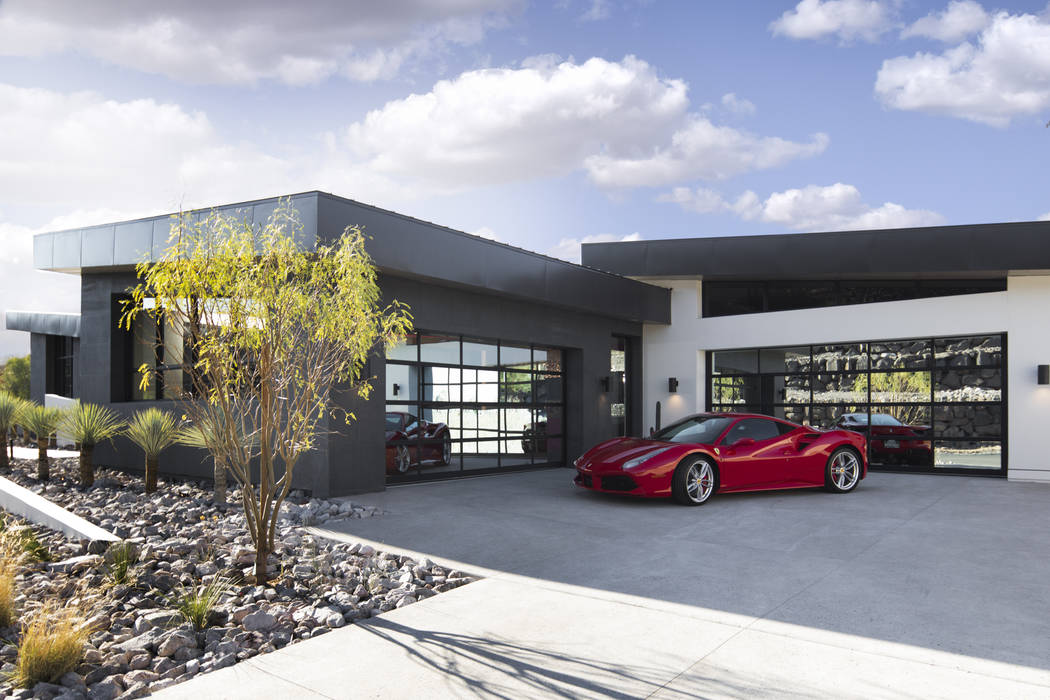 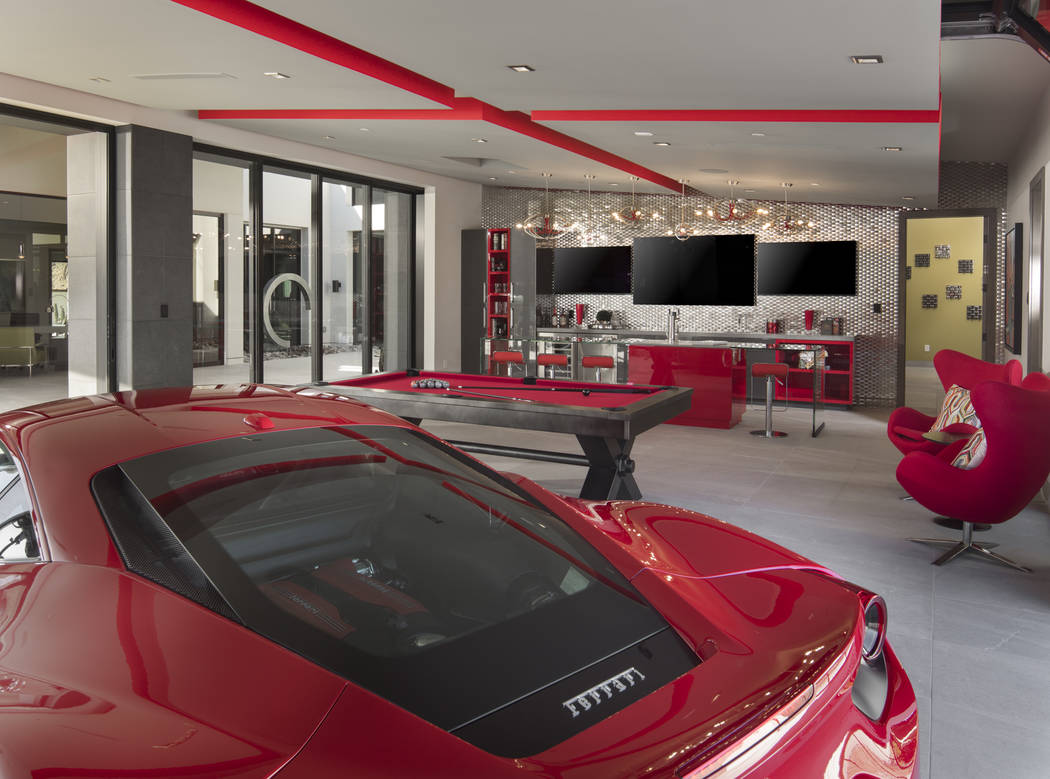 The 2019 New American Home has a garage that doubles as an air-conditioned man cave with a pool table, televisions, refrigerator and bar. (Sun West Custom Homes) 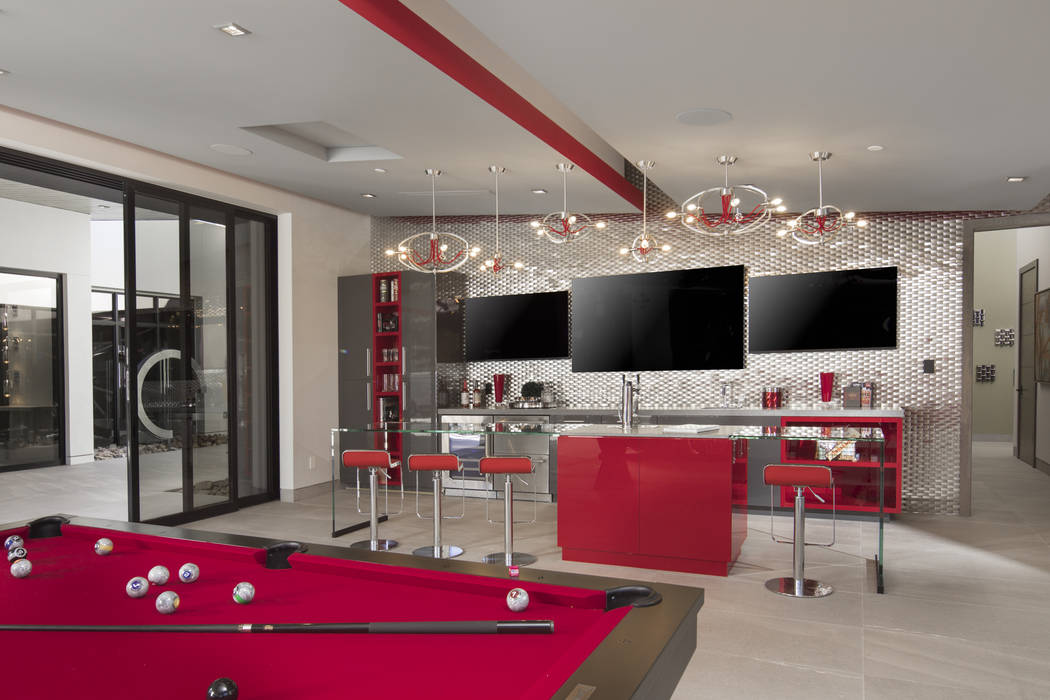 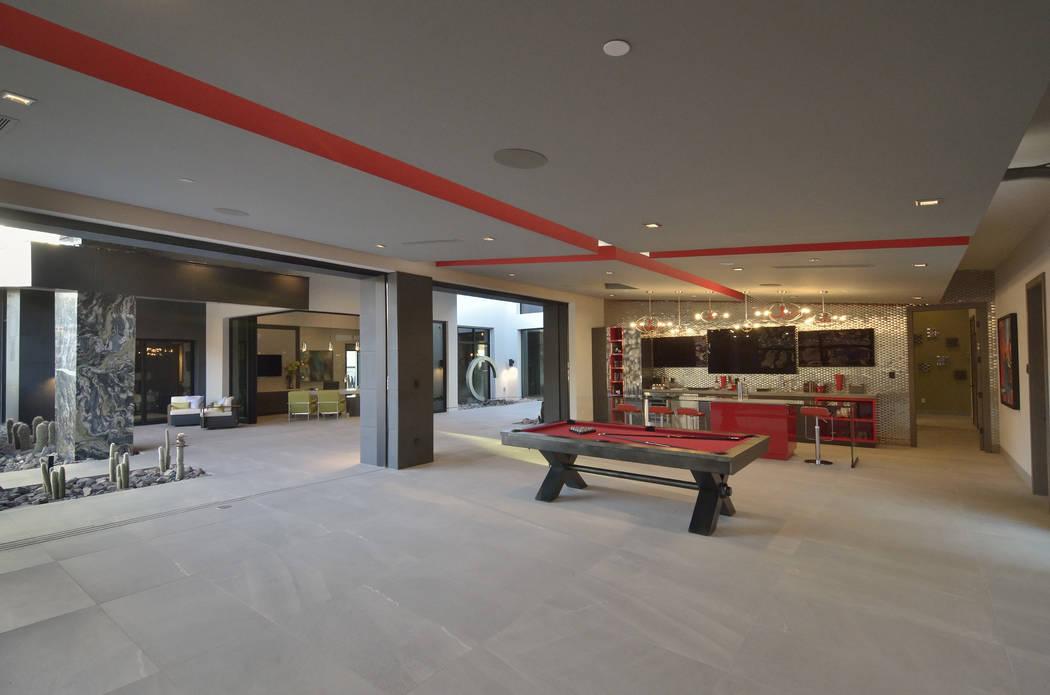 The home's garage that includes a recreational area is off the entrance to the home. (Bill Hughes/Real Estate Millions)

When it comes to luxury homes in Las Vegas, it’s not just about the great room, master bedroom or even the pool.

For some, it’s all about the garage.

Garages play an important role in the design of homes and that trendline is growing even stronger in what customers are seeking from builders these days, and what buyers of existing luxury homes want.

Many luxury homeowners have an affinity to own and collect a lot of cars beyond their everyday sport utility vehicle or sedan, whether it be sports cars or classic vehicles. They like the convenience of having some of their collection at home rather than stored at a warehouse.

Some even do their garages in style with air conditioning and higher-end finishes and even use them as hangouts or public displays for their cars. In one case, a garage doubles as a basketball court.

Susie Perrine, the owner of Las Vegas International Realty, said garages are important to the luxury buyer looking for a resale home. The majority of luxury buyers want a six-car garage at the minimum and many want at least 10-plus car garages, she said. Nine out of 10 times, it’s men that have the biggest interest in the garage, she said.

Perrine said there are many homes on the market today that feature garages holding 10 or more vehicles, including the former home of actor Nicolas Cage in Spanish Hills.

Kristen Routh-Silberman, a Realtor with Synergy/Sotheby’s International Realty, said the bigger the garage the better chance a luxury home has of getting sold and faster.

Routh-Silberman said when it comes to luxury homeowners — men tend to collect cars and watches while women collect jewelry and shoes. She cited one garage in MacDonald Highlands that has a Ferrari hanging off the wall.

The link between luxury homes and cars in garages was evident by MacDonald Highlands recently hosting an exotic car show called Las Vegas Concours d’Elegance. it brought people from throughout the country to the fairways of DragonRidge Country Club to view the cars.

MacDonald Highlands developer Rich MacDonald said a luxury car show and people who display their cars attracts the profile of buyers in his community.

“You have a bunch of high-income individuals who could afford to live here, and it shows off the community nicely,” MacDonald said. “There are a lot of wealthy guys that like to collect cars. Boys like toys, and a lot of our residents have a ton of cars. Everybody loves cars, but it’s just an issue of having a place to put them.”

MacDonald said he is building a spec home in the community that will have 15 parking spaces underneath just for that reason. There are some residents in the community who have more than 100 cars, including sports cars such as Maseratis, Lamborghinis, Ferraris, muscle cars and vintage vehicles dating to the 1920s, he said. One home that sold recently had a garage for 15 cars, he said.

“If you can get 10 cars in a garage, they are as happy as clams,” MacDonald said. “They keep many in warehouses, but they like to keep some close to home. When friends and family come over, they can go play with them, basically. It’s like having something you are proud of and can enjoy.”

Even builders of luxury homes have an affinity for large garages, not only to house vehicles but for other functions.

Dan Coletti, the owner of Sun West Custom Homes, has built luxury garages in MacDonald Highlands, Ascaya and Summerlin. He owns a home in The Ridges with a 1,250-square foot attached garage that can hold six vehicles and a second detached garage measuring 1,100 square feet that can hold four. He has the space to store power tools, welder, metal cutters and grinding machines where he works on projects.

“We have been making the ceiling heights a minimum of 12 feet and our owners would sometimes have us install car lifts so they can stack two cars in (one) space,” Coletti said. “They love that so you don’t have to have a bigger garage.”

Some buyers are requesting air conditioning, depending on how much they use the garage and whether they need it to acclimate classic cars that could otherwise be damaged by the heat, Coletti said. About 30 percent of customers ask for something special for the garage, he said.

“We are even making some big enough and with air conditioning so they can have a sitting area where they can look at their nice cars and enjoy the space,” Coletti said. “We even tile the floors sometimes to make them like a nice showroom. I think garages are trending to a higher quality and nicer finishes to become more deluxe.”

Nothing says that more than when Sun West built the 2019 New American Home displayed at by the National Association of Home Builders’ show in Las Vegas in February. The approach to the home in Ascaya in the Henderson hills starts with a courtyard and glass-walled showroom garage for exotic cars that doubles as an air-conditioned man cave with a pool table, televisions, refrigerator and bar. It’s visible for those approaching the front door, and added about $400,000 to $500,000 to the cost of the home, Coletti said.

“If someone can afford a nice house, they want the ability to show off their nice car,” Coletti said. “They worked hard to get that car and instead of being locked under cover, they like that it can be seen all the time.”

Tyler Jones, the founder of luxury builder Blue Heron, said interesting and large garages are a common feature in homes requested by buyers. About one in five want more than a traditional garage that holds four vehicles, he said.

Jones said he’s designing an 18-car garage in a boomerang shape with a man cave in the middle with a pool table, bar and living space immersed in it with glass walls where you can see vehicles in every direction.

Jones said he’s building a home in the Summit in Summerlin with a 11-car garage in the basement in which, as your walking to entry, it looks like the car is floating on water.

In a design proposed for a luxury home in Pahrump adjacent to a race track, the plans called for a four-level, glass elevator to take vehicles to different floors of the home, including the master bedroom on the fourth floor.

“We’re finishing them like a home with tiling on the floor and same windows and pocket doors and glass walls in the home,” Jones said. “A lot of times we have a full bathroom. Some people are into their cars. They are fun, sexy, beautifully exquisite and fast.”