Skip to content
Sign up for our newsletter
section-ads_high_impact_1
By JEFFREY MEEHAN SPECIAL TO LAS VEGAS BUSINESS PRESS
January 29, 2018 - 6:46 am 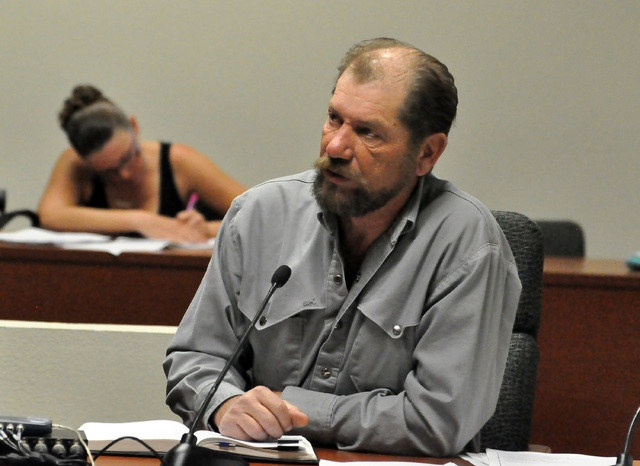 Large homebuildng companies in Las Vegas and beyond, along with commercial developers looking to fan out to the Pahrump Valley, could find available water resources in the valley, despite a recent order by the state engineer to restrict domestic well drilling in the unincorporated town some 60 miles west of Las Vegas.

Nevada State Engineer Jason King issued order number 1293 in December, putting a halt to domestic well drilling without first obtaining 2 acre feet of existing water rights in the Pahrump Basin for parcels without water rights relinquished to them. The order doesn’t include existing domestic wells that need to be rehabilitated or redrilled.

Several major builders such as William Lyon Homes and Beazer Homes currently have hundreds of lots under construction or planned in subdivisions in the Pahrump area where a water utility is available to connect to, along with approvals from the state engineer on some projects already. The state engineer must sign the final map before homes in a subdivision can be connected to a utility.

Local utilities do have room to take on more projects in the Pahrump area.

Three major water utilities in Pahrump don’t have an endless stream of water rights for development, but they do have thousands of acre-feet of available water resources for the expected 1.5 percent annual growth projected to occur in the region over the next five decades, according to estimates by the Nye County Water District.

According to material presented at a Dec. 11 meeting of the Nye County Water District Governing Board, which voted to send a letter to the state engineer, Jason King, recommending he put out the order to limiting well drilling in Pahrump, it was estimated that somewhere between 11,000 acre-feet to just under 15,000 acre-feet of annual allocation of water rights were held by utilities that were not allocated to a commercial or residential project as of August 2017.

Oz Wichman, general manager of the Nye County Water District, estimated that Pahrump could more than double its current population to 80,000 residents by 2065. Pahrump houses more than 36,000 residents, according to information from the U.S. Census Bureau in 2010.

One of the major housing projects in Pahrump is known as Mountain Falls, where 3,200 planned single-family homes are in the works.

Other large projects in motion in the Pahrump area include the Burson Ranch at Tesora by Beazer Homes Holding Corp. That project is pegged to raise nearly 600 single-family homes in Pahrump.

The project got its start in 2005 before the recession, with the original development agreement expiring in 2015. The development, like many others, came to a halt during the downturn. About 30 homes were built before the bust. The project was readopted by the county in an updated agreement in November 2016.

The final map approval on new projects must go through the state engineer’s office, which requires a will-serve letter from a local utility. Developments are also inspected to make sure that water rights are in good standing and in sufficient quantity to serve a potential project, Nevada State Engineer Jason King said.

Many projects have already reached approval by the state engineer’s office and are awaiting development, according to King.

Mountain Falls, being developed by William Lyon Homes, also predates the recession era, and 1,000 single-family homes have already been completed on the project, with another 600 lots approved by subdivision maps, said Darrell Lacy, planning director for Nye County. An additional 1,600 single-family homes, which have yet to have a final map approved, have already been approved through a development agreement by Nye County.

Developers are also required to have a final subdivision map approved by the state engineer, which forms the lots for a subdivision, Lacy explained.

“Parcel maps are done for formation of four lots or less and usually domestic wells, so many of the (domestic) well lots in the valley are formed with parcel maps instead of subdivision maps,” Lacy said.

Lacy said these parcel maps aren’t approved by the Division of Water Resources. The county started requiring relinquishment of water rights in 1991 on parcel maps, he said.

According to Lacy, there are many lots in the valley that have water rights already dedicated to them and are exempt from the order.

“… yes, the DWR order will have an impact, but not as bad as some people assert,” he said.

Projects are also in the works and accounted for.

“There are many subdivisions in existence with final/tentative map approval that are still awaiting development. Many of these subdivisions are already on the books and are within one of the three main local utilities’ service territories and were created many years ago.”

“No new domestic well subdivisions will be allowed without the dedication of senior groundwater rights,” King said.

In an email, King said future subdivision development could require “the dedication of senior priority water rights, extremely stringent conservation measures, an additional over dedication of water rights or a new water source (importation of groundwater/reuse of effluent).”

Water levels have been dropping over the years, according to data from the U.S. Geological Survey, and King sees this continuing.

“This office projects that the water levels will continue to decline at the current rate or faster, especially on the valley floor,” he said. “However, water levels are obviously influenced by weather patterns and can fluctuate greatly …”

Great Basin Water Co., one of three local utilities in Pahrump, is “working closely with the Nevada Division of Water Resources and the Public Utilities Commission to protect our water resource,” said Wendy Barnett, president of Great Basin Water.

“Our service territory (Certificate of Public Convenience and Necessity, or CPCN), for which we hold water rights, is approved by the Public Utilities Commission of Nevada (PUCN),” Barnett said. “We file an Integrated Resource Plan with the PUCN triennially, which requires us to address expected growth rates”

According to Wichman, the removal of what the Nye County Water District estimates to be 8,500 undeveloped parcels, and cutting off future commitments to the over-allocation of water rights, could put the Pahrump Valley on more of a balance when it comes to water use in the area.

According to his estimates, the Pahrump Valley will be over-pumping its water resources by 1,167 acre-feet of water annually over an annual perennial yield of 20,000 acre-feet of available water in the Pahrump basin. That number removes the several thousand undeveloped parcels, and potential for others without existing water rights, from the mix in his estimates that span to an outlook through 2065.

Pumpage is what affects the overall health of the valley, he said.

Within the same report with Wichman’s estimates, the Division of Water Resources also developed estimates of overpumpage in the Pahrump Basin, climbing past 6,700 acre-feet in deficit to the perennial yield every year.

Wichman sees ceasing the over-allocation of water rights as a necessity and positive.

“The one thing that I think the data clearly shows is that you cannot continue to add commitments on for water in that basin in perpetuity,” Wichman said.

Wichman estimated the Pahrump area water right commitments to roughly 63,000 acre-feet of water rights allocated, against the perennial yield is 20,000 acre-feet. This commitment included roughly 11,000 existing wells and water rights held by local utilities and other sources including the 8,500 undeveloped parcels.

Stopping the over-allocation of water rights in the Pahrump area could change the face of the unincorporated town, as some of those water rights are set aside for agricultural use.

“The big assumption is that the ag rights will continue to give way to development but not all of them,” Wichman said.

During a Dec. 11 meeting of the Nye County Water District Governing Board, where Wichman presented his data, it was brought up that there might not be enough existing water rights available for the 8,500 property owners.

Former water board member Michael Lach brought this to the attention of the board during a public comment period at that meeting. By his calculation, using only the water rights of agricultural use, which he believed were the only water rights available for sale in the valley, about 3,500 people would not be able to use their property going forward.

Wichman said there are other sources of water rights available beyond agricultural.

Nat Hodgson, CEO of Southern Nevada Home Builders Association, said that it’s “always better to have a predictable system on how to proceed with development when it comes to water.”

There are pulses and minuses to the situation as it stands for property owners.

“The obvious would be raw land is worth a little less without the rights but if you can obtain water rights then you don’t have to depend on a case-by-case approval,” Hodgson said.

Dennis Smith of Home Builders Research said many of the water rights available in the valley were picked up by investors and land owners prior to the recession, though developers could still purchase them.

Jack said it’s too early to tell what might happen going forward on pricing but did have a prediction.

“What I would anticipate would be the attractiveness of a one-off lot development just became a lot less here,” Jack said.

The cost for water rights in the Pahrump area have varied over the past several years, but Jack said he’s seen some allocations going for about $3,000 to $4,000 per acre-foot, with other deals hitting as low as $1,500 for an acre-foot in early 2017, according to data from Jack, which he pulled from the Nye County Recorder’s Office through early June.

A check of the recorder’s office in Nye County showed prices per acre-foot of water heading over $4,000 during the last three months of 2017. No transactions for water rights have been recorded in 2018 as of Jan. 11.