Skip to content
Sign up for our newsletter
section-ads_high_impact_1
By Robert Horne Special to the Las Vegas Business Press
July 6, 2015 - 3:00 am 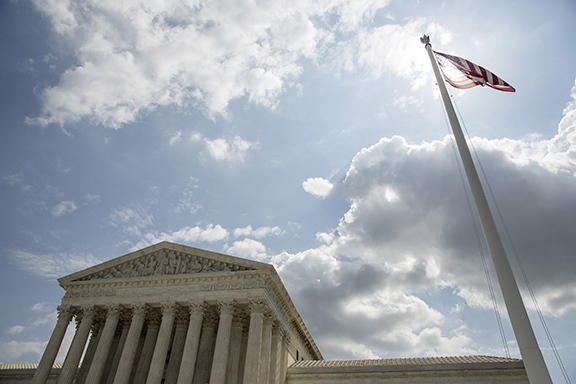 The U.S. flag flies in front of the Supreme Court in Washington, in this May 18, 2015 file photo. REUTERS/Joshua Roberts/Files

Amid a flurry of major rulings from the U.S. Supreme Court, the one that might affect local businesses the most might have gone unnoticed.

In a 5-4 vote June 25, the Supreme Court ruled that the Fair Housing Act of 1968 can be interpreted broadly, allowing lawsuits under a legal theory that civil rights group claim is a crucial tool to fight housing discrimination.

The ruling in Department of Housing v. Inclusive Communities Project Inc. allows people to challenge lending rules, zoning laws and other housing practices that have a harmful effect on minority groups under the “disparate impact” theory, even if there is no proof that companies or government agencies intended to discriminate, according to The Washington Post.

Inclusive Communities brought a discrimination claim against the Texas Housing and Community Affairs Department, alleging it was violating the Fair Housing Act by allocating tax credits to inner-city housing projects in minority neighborhoods, while simultaneously denying tax credits for projects that were to be built in wealthier, predominantly white Dallas suburbs. This meant that the housing options for Section 8 tenants, who were predominantly black, were often in the poorer, minority communities rather than the suburbs, according to an article published by the law firm Fisher &Phillips, which has an office in Las Vegas.

Alyssa Engelberg, an associate attorney with Fisher &Phillips’ office in Portland, Ore., said that because disparate impact claims are easier to bring than claims of intentional discrimination, this ruling would have a bigger effect for lawyers.

If any property managers or private landlords are concerned about this ruling, however, the first thing to do is to make sure the Fair Housing Act applies to them, she said. If those entities covered by the act are concerned there is a disparate impact linked to their policies, they should review those policies and contact an attorney, Engleberg said.

“It doesn’t apply to small, owner-occupied buildings with fewer than five apartments and one is occupied by the owner or to single-family homes that are sold or rented without a broker,” she said. “It generally applies to bigger entities. As a whole, if an individual is concerned about it, they should keep an eye on the effects of their policies and practices. You don’t want to have obvious policies that are racially discriminatory.”

Kami Zargari is a broker with Triumph Property Management, a local property management firm. Triumph manages properties that are covered by the Fair Housing Act. Zargari said the Supreme Court’s ruling is a victory for housing advocates, civil rights groups and the federal government.

“(The ruling) has also placed new standards and limits regarding how and when disparate impact claims can be heard in court,” he said. “Even though the Fair Housing Act encompasses disparate impact discrimination, it could be more challenging for civil rights groups and individuals to bring these types of claims to court in the future.

“Moving forward, any plaintiff who brings a disparate impact claim to court, especially if it applies to housing, must show that the defendant’s policy really did cause the disparity. Also, housing developers and authorities can’t be held liable under the theory of disparate impact if they are able to show that their policies are needed to complete valid goals.”

According to statistics provided by Triumph Property Management, more than 10,000 Housing Choice Vouchers are issued each year, and those vouchers help pay about 30 to 40 percent of rent for 40,000 Clark County residents.

“Besides being an excellent program for helping individuals and working families in Clark County get into affordable housing, the Housing Choice Voucher Program also is a program which benefits landlords and property owners as well,” Zargari said.

“When a property owner receives these vouchers they are getting guaranteed rent, and they will be able to rent their vacant rental properties in a very short period of time since families who utilize the housing choice voucher program are typically on a waiting listing and will be ready to move in quickly.”

Landlords and property managers, however, will have to ensure their policies follow Fair Housing Act rules and guidelines and the court’s ruling in Department of Housing v. Inclusive Communities Project Inc.

Zargari said Triumph has team meetings to ensure employees are knowledgeable about and complying with Fair Housing guidelines.

“This ruling reaffirms the importance that property managers follow the Fair Housing Act to the letter of the law and continue working hard to ensure that they are following FHA best practices for advertising and renting their properties,” he said.

“Besides completely following the Fair Housing Act, property managers must also have consistent rules for their multifamily buildings, have a detailed eviction process and have better employee training on sexual and all other forms of harassment.”

One concern that some landlords and property managers might be concerned with is that the Department of Housing v. Inclusive Communities Project Inc. decision might move the bar to a results standard, where if you rented to white tenants the past three times then you open yourself up to a discrimination case.

Engelberg does not see that as the case.

As far as disparate impact complaints, Engelberg said businesses could use the business necessity defense, which claims that yes, the policy had a disparate impact, but it is necessary to achieve a valid goal.

Engelberg is unclear about the effect of the court’s ruling. She said the court’s goal is race-neutral policies, and the court cautioned strongly against covered entities resorting to the use of racial quotas.

“In striving to achieve our ‘historic commitment to creating an integrated society,’ we must remain wary of policies that reduce homeowners to nothing more than their race,” Supreme Court Justice Anthony Kennedy wrote in the majority opinion.

“But since the passage of the Fair Housing Act in 1968 and against the backdrop of disparate impact liability in nearly every jurisdiction, many cities have become more diverse. The FHA must play an important part in avoiding the Kerner Commission’s grim prophecy that ‘our nation is moving toward two societies, one black, one white — separate but equal.’ ”