Skip to content
Sign up for our newsletter
section-ads_high_impact_1
By Rodric J. Hurdle-Bradford Special to the Las Vegas Business Press
October 4, 2015 - 12:52 pm 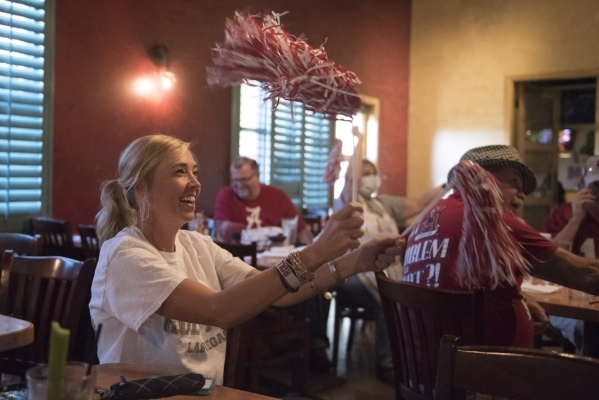 When Las Vegas revenue driven from the college football season is mentioned, it usually is in regard to sports wagering, and hosting the Las Vegas Bowl every December.

But there is another economic driver related to the popular sport — college alumni football watch parties.

With the ease of distributing information via social media, interest in college alumni social events to watch football games has risen dramatically.

In Las Vegas, every week an estimated 10 to 15 of these watch parties occur in an independent Las Vegas bar or dining establishment, keeping local money within Las Vegas establishments for an even more efficient economic impact.

“Las Vegas is such a transient city, so it is refreshing to walk through the doors and feel like you are right back at home,” says Leaa Myers, spokesperson for the Las Vegas chapter of the University of Alabama alumni association who helped set up their weekly events in two different locations. “The passion and love you receive at these events are great and the locations at these popular restaurants gives it a lot more energy. We have a location for locals in Henderson and one on the Strip for all the tourists, that way it is the best of both worlds so we all can hear that famous ‘Roll Tide.'”

The Alabama Crimson Tide’s watch parties are at Carlos & Charlies at the Flamingo and Henderson at Nacho Daddy. But either segment is welcome to attend any party for an even more interesting experience.

“They bring the energy to our restaurant every Saturday and all of the paraphernalia and apparel makes it an even more fun experience for the tourists,” says Genaro Dispa, operator of Carlos and Charlie’s Mexican restaurant in the middle of the Flamingo Hotel and Casino. “We are always hosting different sporting events and watch parties, but with them it is a totally different experience, because it is a lifestyle and it shows. When the guests hear that ‘Roll Tide’ during a game it is great because on the other side at the bar we have a popular Las Vegas DJ, so it is really a lot of fun.”

The steady business in the weekly games is definitely a shot in the arm for the local and independent restaurants and bars, especially with large universities like Michigan State University and Ohio State University. These alumni groups often have special promotional beverage and food special prices, which encourage large group orders during multiple points of the game.

Because of the camaraderie, the alumni groups often tip well, making them a favorite of bartenders, servers and cocktail waitresses. They also guarantee up to four hours straight of patronage, rare among guests at any restaurant.

“It has been fun watching them grow as a group,” says Amy Kocher, general manager of the Henderson location of the popular Nacho Daddy restaurant and bar chain. “Now, after a couple of seasons, I feel just as much as part of the family as the other alumni. It is a really fun time and we are all happy that we came together.”

With college football being such big business, especially with the new playoff system, in the last decade the heavy increase in televised games the one inconvenience is that about half the games do not receive a start time until six days before. This allows the college networks to assign the different conference and non-conference games to different television time slots in the morning, afternoon and prime time.

The alumni watch parties are also an opportunity for the alumni clubs to raise money for non-profit groups, scholarships to send local high school students to their alma mater and to pass out a wide variety of school promotional items, which includes stickers, clothing, hats, jewelry, branded beverage items foods and snacks.

For McMullen’s Irish Pub, the trend has been doubly efficient, as they host alumni watch parties every week for both Michigan State University Spartans and Clemson University Tigers. They have hosted Michigan State for four years and just started with Clemson this season.

“Most bars in Las Vegas are set up for the National Football League, but we are the opposite. We are set up for the college teams, and the Saturday experience,” says Brian McMullen, owner of McMullen’s Irish Pub. “There are a million Las Vegas bars focusing in on the NFL and since we don’t, we like to think of ourselves as one in a million, and that is why we are popular and people come. We had Ohio State before for three seasons and they grew from 100 to over 200 for the last bowl game. The continuity allows the word to spread and the group to expand.”

The trend of the watch parties continues through the fall and peaks during the holidays in December and January with the arrival of the college football bowl games. More than 30 games are contested during a four-week period, often matching teams from different parts of the country.

By March, the atmosphere is replicated for the NCAA Basketball Tournament, also known as March Madness.

For Las Vegas this revitalized interest in school spirit due to the increased visibility of college sports means that local independent dining and cocktail establishments have opportunities to identify and secure ongoing revenue from a friendly crowd that will be also be sponsoring charities and scholarships. It is a true win-win situation.

“We are very happy with the relationships we have built through the years with the college alumni,” says McMullen. “That is the foundation of any successful business and the football games have allowed us to do that with great success.”