Skip to content
Sign up for our newsletter
section-ads_high_impact_1
By BUFORD DAVIS Las Vegas Business Press
April 3, 2017 - 12:14 am 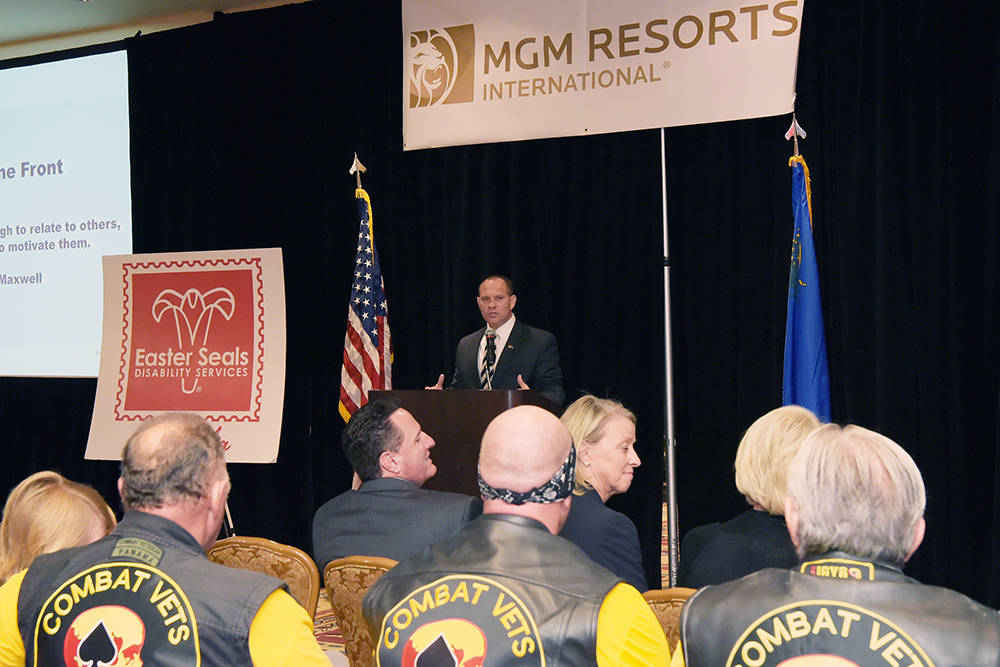 Transitioning from military to civilian life is challenging for many of the 200,000 women and men who leave the United States armed services annually.

MGM Resorts International has created a recruitment and training program to attract a talent pool that is often underutilized, and to help veterans better settle into the civilian workforce.

“Veterans are not your traditional diverse population, but in some ways they have been treated as lesser, even though they have made many sacrifices for our country,” said Phyllis James, MGM chief diversity and corporate responsibility officer.

“As war veterans are coming back from Iraq and Afghanistan and other places, we have tried to embrace that stream of talent in our talent acquisition programs. They are some of the best-trained people in the world, and that is a highly important stream of talent for us to tap into. That is why we feel so strongly about it.”

MGM hired 648 veterans in 2016 and has added 98 others to the employee ranks so far this year.

“Veterans find they are at a disadvantage when it comes to joining a company (when) coming out of the military,” said Wilson Edgell, MGM diversity and disability outreach program manager.

“Veterans need to understand how their skills transfer into our business and be able to articulate and give examples of how their skills in the military prepared them for civilian opportunities,” Edgell said.

“You can talk all day that they have the skills, the leadership and all that, but I still have to have something that a business needs. I have folks reach out to me and say, ‘Wilson, I will take anything.’ But we are not hiring for anything.

Edgell has been on both sides of the fence, serving 27 years in the U.S. Air Force, beginning at age 17. “I loaded bombs and missiles for the majority of my career,” he said. “I absolutely enjoyed each and every moment of it. I was raised in a small town in McLean, Texas. There were not a lot of opportunities unless I wanted to be a farmer, and that is not what I wanted to do. Joining the Air Force was an easy decision for me.”

Less easy was finding a direction as he was preparing to leave the service in 2012. He had always assumed his new career would relate to aircrafts or munitions, and he had never entertained the idea of entering hospitality and gaming.

“I knew I was going to stay in Las Vegas, because my wife said we are not moving, because we had a son still in high school,” he remembered. “I said ‘OK, what opportunities really are there in Las Vegas?’ There was a flyer for Boots to Business on the table at the base, and it was talking about opportunities at MGM Resorts. That is what started my journey into the company.”

Adapting to civilian life is also complicated by an absence of the camaraderie and sense of higher purpose that military life provides.

“A lot of veterans, when they transition out, are not successful at their first or even second or third jobs, because when they leave, there is a void that has not been filled,” Edgell said. “And that (void) is the esprit de corps. That sense of purpose, the ‘Why am I here and what is the purpose and what is my objective?’”

He said the company’s Veteran Employee Resource Group helps provide many of the same social elements.

“That is a great opportunity for folks to come together — veteran and non-veteran — to network and socialize and coach and mentor each other and have conversations to create that camaraderie and esprit de corps that we had when we were in the military. It gives them an opportunity to network and share their skills and experience.”

MGM’s commitment extends to supporting employees who are active service members in the National Guard and Reserves. Not only will their jobs be waiting for them when they return from service, but — depending on the position — salaries, hourly wages and estimated tip equivalence will continue during their absence.

“I wish I could help them all,” Edgell said, “but the ones that I’m able to help, it is rewarding to see them find an opportunity where they can add value and thrive in our business.”