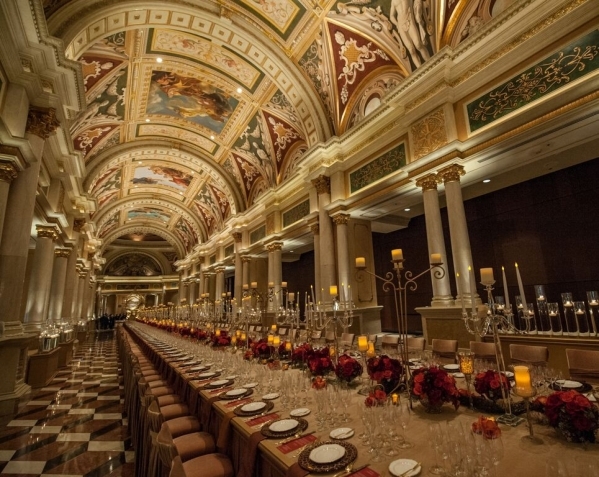 The grand banquet table at The Venetian Grand Colonnade will host the Ultimo celebration. (Courtesy)

The culinary event, Ultimo – A Weekend of Excellence, hosted by The Venetian and The Palazzo Las Vegas, will bring lavish feasts, the romance of Italy and a dash of competitive cooking to Las Vegas from Dec. 17-20.

“This will be, without a doubt, the most spectacular gathering of world-renowned chefs in Las Vegas,” Sebastien Silvestri, vice president of food & beverage for The Venetian and the Palazzo, said in a statement. “For the culinary enthusiast, this will be a weekend to remember.”

This winter weekend will feature the return of The Venetian’s Grand Banquet, which was introduced in 2013 and spans the iconic Grand Colonnade of the resort. In its first year, chef Mario Batali called it “the grandest meal ever served in Las Vegas.”

Ultimo’s theme of Earth, Water, Air, and Fire, each of life’s elements, will be celebrated during the meal experience.

The event will featurespecial festivities throughout the weekend, including a floating luncheon on the Grand Canal at The Venetian and cooking over an open flame.

For more information on the schedule of events and to buy tickets, visit www.venetian.com/ultimo.

The agency, which is dedicated to the growth and global competitiveness of U.S. minority-owned businesses, plans to award 29 individual cooperative agreements to operate MBDA Business Centers starting April 1. The awards will cover a five-year period and total $10.2 million annually. The centers will be in areas with substantial minority populations and minority-owned companies.

“Our new and improved business center program was developed based on performance outcomes of our most successful centers and where we’ve had the most impact,” MBDA National Director Alejandra Y. Castillo said in a statement. “Under the new program, the nationwide business center network is more integrated, places more emphasis on collaboration, and was designed to ensure the quality and consistency of service delivery throughout our nationwide network of business centers.”

Applications are due by Dec. 3. For more information, visit www.grants.gov or www.mbda.gov.

Award winners received a special feature in the Business Voice and on the chamber’s website and an award package.