Skip to content
Sign up for our newsletter
section-ads_high_impact_1
By Craig A. Ruark Special to the Las Vegas Business Press
January 24, 2016 - 9:34 am 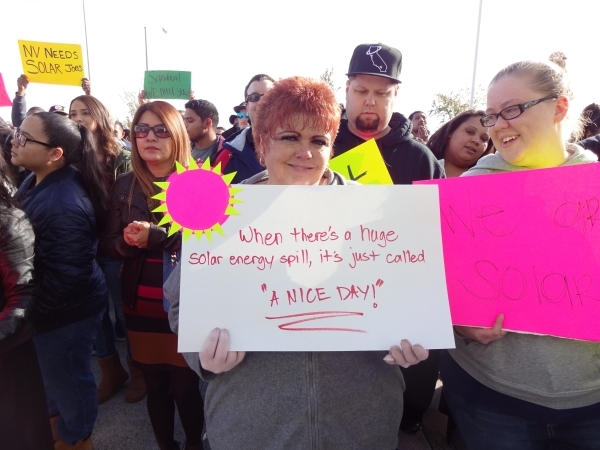 A protestor makes her point about solar energy outside a Public Utilities Commission meeting in Las Vegas Jan. 13. (Craig A. Ruark, special to the Las Vegas Business Press)

The issue of rooftop solar is not likely to be settled soon.

But the battle lines have been drawn pitting star power and protestors vs. legislative mandate, Las Vegas vs. Nevada, the public perception of Nevada as a solar leader vs. reality.

On the morning of Jan. 13, the Public Utilities Commission of Nevada held a hearing, solar advocate voices got louder, threats grew stronger, and the commission started preparations for an impending court battle.

Both sides have declared “game on.” And where that leads is anybody’s guess.

At stake for the residents with rooftop solar is a new rate that reduces the amount NV Energy pays for excess electricity that is supplied to the grid, in addition to a fee for hooking up to the grid.

The plan is designed to be implemented in steps over a four-year period. Net Energy Metering customers would see their service charge for connecting to the grid increase from the current $12.75 per month to a rate of $38.51 by Jan. 1, 2020. Meanwhile, the amount that they receive in credits for supplying energy to the grid will decrease from the 11.5 cents per kilowatt hour to 2.6 cents per by Jan. 1, 2020.

Because of the initial investment cost for solar panels, along with the reduced earning and increased connection fees, most agree that residents with solar panels will be paying more for electricity than residents without solar. NV Energy will be receiving energy to its grid without paying the cost of generating and, largely, transmitting because most energy generated by residential solar customers is distributed within the neighborhood.

The chants were led by high profile notables such as Debbie Dooley, a preacher’s daughter from Louisiana, co-founder of the Atlanta Tea Party, member of the board of directors of the national Tea Party Patriots, and, since 2012, a fierce solar-power advocate.

She, along with actor and environmental activist Mark Ruffalo, most recently known for his portrayal of Dr. Bruce Banner in “The Avengers and Avengers: Age of Ultron,” took turns speaking through a bullhorn delivering sound bite after sound bite.

Within hours, the commission would accept that challenge.

Inside the chambers, it was standing-room only during the public comment period as speakers poured their hearts out for their allotted three minutes, pleading for the commission to reverse their December ruling that instituted a new rate structure and monthly connection fee.

During the seven hours of public comment, commissioners Paul Thomsen and David Noble in Carson City, and Commissioner Alaina Burtenshaw in Las Vegas, sat stoically while being accused of everything from taking bribes to collusion to not even knowing how solar energy works.

After all the members of the public who asked to speak had their turn, the chairman declared the public comment period closed and moved onto to the next items on the agenda.

Three of the items involved the request for reconsideration of the exit fees being assessed to the Las Vegas Sands Corp. (owner of The Venetian, Palazzo, Sands Convention Center and this publication), Wynn Resorts, and MGM Resorts. The resorts want to leave Nevada Power and choose another provider. The request was denied in each of the three cases. A second request by each of the three entities to consider a different energy provider — yet to be named — was approved.

Then came the residential solar agenda item. The item itself, and the only thing that the commission was allowed to vote on during this meeting, was a “petition for a stay” of the December ruling until a petition for reconsideration could be heard.

That petition has been filed by the Nevada Attorney General’s Office, Bureau of Consumer Protection, along with the Alliance for Solar, Vote Solar, and the Solar Energy Industry Association. The petition for reconsideration will be heard during a meeting in February.

Before taking a vote on the petition for a stay, the chairman, as is procedure, made a few corrections to the draft order, then asked if there were any comments or questions by each of the Commission members. Commissioners Noble and Burtenshaw replied that they did not.

However, Thomsen said “I feel greatly for the employees that lost their jobs. Receiving that news from all of us over the holidays was heavy on all of our hearts, and we heard today, and we have the distinct decision of balancing the rates for 2.8 million people who live in this state.”

Thomsen then acknowledged Commissioner Noble “for the incredible work” that he did in preparing the order.

Thomsen pointed out that Net Energy Metering first passed in 1997 and that the commission and the “highly qualified individuals that work here have been working with NEM since that time.”

“So I take offense, and I’ll take notice to all of the comments about how we don’t know what we’re doing, we didn’t do our homework. This commission has been working tirelessly not to penalize anyone or to favor one technology over the other, but to create a path forward for rooftop solar in this state that treats all rate payers fairly.”

Acknowledging that Ruffalo’s comments were exciting, Thomsen added that it “doesn’t make me uncomfortable to try to protect 98 percent of the residents in this state who don’t have net metering on their roofs.”

Thomsen then took this opportunity to ask Commissioner Noble a list of prepared questions. One of the important questions was about the contracts entered into by the residents for the sale of excess energy. The answer is, for those who lease their equipment, their contract is with the solar company. However, for those who purchased their system, the entered into an “agreement” with NV Energy whereby the language in those agreements state that it is subject to a legislative as well as a regulatory change.

Upon hearing that explanation, Thomsen took the opportunity to interject his observation that on June 5, the Nevada Legislature passed SB374, requiring the PUCN to develop an alternative to Net Energy Metering. Prior to that date, there were just 6,000 customers in the program. Currently there are more than 17,000 customers, which means that 11,000 were signed after the governor signed SB374.

“For the life of me, I don’t know why rooftop solar companies didn’t at least let their customers know that this proceeding was going on,” said Thomsen “I am flabbergasted; I don’t know why people would do that knowing that there was a decision coming down.”

What was interesting about the Q & A between Thomsen and Noble, is that the answers prepared by Noble were clearly designed to be read into public record in reply to the allocations made by the public during the public comment period, and to establish the basis by which their December decision had been made. Noble answered each question in detail, at times explaining technical terms for members of the pubic.

In the end, the petition for a stay was denied by the commission and the new rates remain in effect as of Jan. 1. And, while it was not stated out loud, the commission lead by Thomsen answered Ruffalo with its own implied version of “GAME ON.”

Meanwhile, on Jan. 19, Steve Ross, the City of Las Vegas’ mayor pro tem, jumped into the fray stating that “Their [the PUCN] decision is a poor decision… and we need to do something different in the city and we’re going to do that.” His statement came on the heels of his proposal that the city form an independent committee of energy experts to advise the city in the development of a comprehensive energy strategy.

Part of Ross’s plan is the sponsoring of a city ordinance that would create an Energy Improvement District that would allow residents and businesses to pay for solar panels and energy efficiency improvements. The payments could be rolled into the property’s mortgage, making solar upgrades more affordable and tying the improvements to the home or business rather than the individual.

Besides the recently continued 30 percent federal rebate program on solar systems, Ross is also anticipating the development and availability of affordable energy storage systems which could make the discussion of Net Energy Metering a moot point.

“The city of Las Vegas not only supports solar energy, but has emerged as a world leader in sustainability. In this light, I am concerned by the recent ruling by the Public Utilities Commission that negatively impacts all those residents who have invested in solar in their homes, as well as those who hope to add solar in the future. I believe that this sends a mixed message to the world about the commitment that Las Vegas has to sustainability,” said Ross.