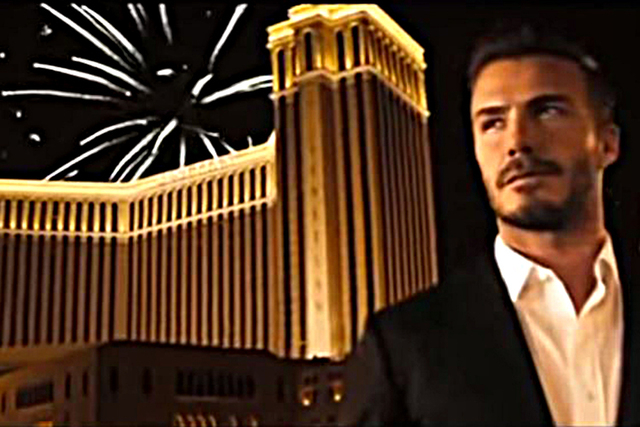 All is not well in Macau where the Sands’ problems extend beyond the disappearance of the whales.

Sands China, a subsidiary of the Las Vegas Sands, blamed “technical complexity” for an advertisement that was leaked on the Internet on Feb. 12 featuring soccer star David Beckham, according to a report by South China Morning Post.

The ad was leaked a day after the newspaper revealed that the casino had pulled the plug on it just two days before the big reveal on Feb. 12.

The South China Morning Post said after initially refusing to say why the launch was scrapped, Sands China issued an explanation on Feb. 11. “The company would like to clarify that the press event had to be postponed due to the technical complexity in adapting this internationally produced, high-quality TV commercial to various media platforms at our properties. This issue could potentially have led to a press preview experience that would not have met The Venetian’s high standards of quality if the event were to have taken place on Feb. 12 as originally planned.”

However, Sands China previously gave conflicting dates for the advertisement’s roll-out. The Venetian Macau’s Twitter account, which started a 10-day countdown, promised that “everything will be revealed” on Feb. 12.

Hours later, in a statement issued to the South China Morning Post, the firm said the launch would be on Feb. 13 “as planned”.

On Feb. 12, the video was leaked on Macau-based website WGM8.com.

According to the South China Morning Post, the casino had been promoting its ad campaign promising a world-famous icon and shot by a well-known director. The Post had confirmed on Feb. 10 that Beckham is the focus of the film.

Despite swapping multiple emails and calls with the Post, the Sands public relations team did not mention technical issues as a reason. The “Never Settle” campaign advertisement, according to the Post, shows the celebrity ex-soccer player arriving at The Venetian Sands hotel in Macau to the flash of cameras. Clad in a sharp suit, he then coolly saunters around the complex, taking in the luxury shops, restaurants and gondola rides as smiling, well-dressed Asian guests mill around him.

In one scene, Beckham toasts to a fellow guest at a Chinese restaurant and in another scene, stands on a high platform, above the cheering crowds, watching a boxing match.

In the last sequence of the advertisement, he joins a masquerade at The Venetian’s lobby, where he kicks a soccer ball over a golden chandelier, then raises a glass in triumph as confetti and fireworks rain down.

WGM8.com wrote: “In our opinion, the Venetian’s statement makes no sense whatsoever.”

Though commutes in Sin City are short, according to SelfStorage.com, the biggest reason the city made its list is because there are a high percentage of people, 33.2 percent, who leave for work after 9 a.m. predominantly due to the fact that there are a lot of casino workers.

According to the website, the average round-trip commuting time in Las Vegas is 48.2 minutes and the percentage of people who don’t drive to work is 8.9 percent.

Guests at Westgate Las Vegas can also view their personal subscribed content such as Pandora and Hulu directly on their hotel room TV. In addition, guests have access to amenities including reservations, spa, restaurants, transportation, in room dining and more.

This state-of-the-art system is not currently available at any other property.

Installation has already been completed in more than 1,000 of the resort’s guest rooms and is slated to be completed in the remaining 2,000 rooms this spring.