Skip to content
Sign up for our newsletter
section-ads_high_impact_1
By Craig A. Ruark Special to the Las Vegas Business Press
January 24, 2016 - 9:58 am 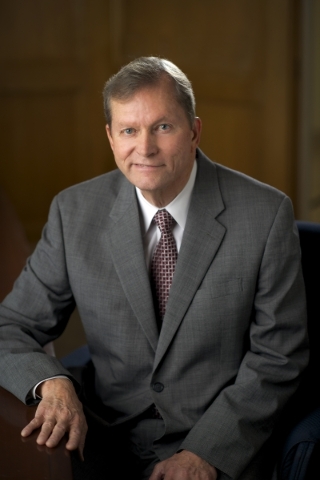 Many have seen his name on maps or posted along the 215, but Bruce Woodbury’s impact on the Las Vegas goes beyond being the visionary behind that beltway around the valley.

He’s no longer serving on the Clark County Commission, where he served for a record 28 years. But he’s still practicing law, still engaged in community projects and still advocating for transportation infrastructure.

These days, Woodbury is pushing for an extension of the monorail and sees a shift away from the fuel tax as the main source of funding for transportation infrastructure.

Born in Las Vegas in 1944, Woodbury attended historic Las Vegas High School where he was a four-year letterman and all-conference guard.

Woodbury’s son Rod penned a story for the Boulder City Magazine that recounted, “When he (Woodbury) was only 16, his father died of cancer, and his mother followed two years later. So, he married his sweetheart, started a family of seven, and ultimately graduated with honors from the University of Utah and Stanford Law School, where he took an early morning paper route and worked in a liquor bottling plant while my mom made draperies from home.”

Most people who know Woodbury describe him as shy and soft-spoken. But beneath his humble exterior is a man who almost single-handedly transformed Las Vegas from a small horse-and-buggy town to a master-planned community.

Woodbury graduated from Stanford in 1969 and returned to Southern Nevada, residing in Boulder City. He passed the Nevada Bar in 1970 and began practicing law in Las Vegas.

Among his many official titles, Woodbury is often referred to as the “father of flood control” as it was his vision in 1985 to create the Clark County Regional Flood Control District. Since that time, the District has constructed dozens of detention basins and improved miles of drainage channels throughout the Las Vegas Valley.

In 1990, as the chairman of the County Commission and incoming chairman of the Regional Transportation Commission (RTC), Woodbury saw the need for improved transportation infrastructure and began working on a new transportation plan for the Las Vegas Valley. This plan included a “fair share” funding mechanism that was approved by the voters and resulted in the creation of the Desert Inn Super Arterial, pedestrian bridges around the intersections along the resort corridor of Las Vegas Boulevard, and a new and more efficient bus system. That initiative also created a beltway loop around the valley.

The beltway project started in Henderson at U.S. Highway 95 and worked west toward Interstate 15. It soon became obvious to Woodbury that it was going to take a long time to build full freeway segments around the valley. So Woodbury came up with a plan to build a combination of frontage roads and two-lane and four-lane segments around the valley and then come back and complete the project to freeway specifications. That work is ongoing.

“I am very grateful to a lot of people that took action to have that project named after me. The issue of infrastructure was a crusade for me, and I pleased with what we accomplished,” said Woodbury.

Although Woodbury no longer sits on the County Commission or the RTC, he is still very much involved in improving the infrastructure of the community.

On Feb. 3, 2009, Woodbury was appointed as a member of the Board of Directors of the Las Vegas Monorail Co. and is working to promote the extension of the monorail from the MGM south to Mandalay Bay. In addition, he is working with a group of citizens to promote the passage of a November ballot question to extend the indexing of the fuel tax.

“This will be a very important ballot question and absolutely needed if we are going to continue with our infrastructure improvement plans,” said Woodbury.

However, with the increase in vehicle fuel efficiency and production of electric vehicles, the revenues from the fuel tax has steadily decreased each of the past five years.

“There is no question that the fuel tax is becoming less and less of a reliable source,” said Woodbury. “Part of the transportation plan that I came up with back in 1990 (with the help of others) goes well beyond the fuel tax. There are six different elements, including a sales tax component, motor vehicle privilege tax, developer tax and a hotel/motel room tax component. I think that you can expect to see more alternatives to the fuel tax similar to what we did in our 1990 plan.”

Nationwide, there are different proposals being considered, such as vehicle use and mileage taxes. However, due to the “big brother effect” of having a GPS monitor vehicle use and other types of reporting components necessary for gauging the use or miles traveled, those proposals have not been popular with the voting public.

In 1984, Woodbury joined the law firm of Jolley Urga and Worth, which later became Jolley Urga Woodbury & Little.

“I was fortunate that I had partners who supported me in my public service by accommodating my flexible hours and conflicting court dates.”

During his 28 years as a commissioner, Woodbury worked long hours. “Most of the time I had children in school and at night while they did their homework, I did mine,” he said.

Woodbury estimates that on average he split the work evenly 50/50 between his duties as a commissioner and as a lawyer/partner in the firm.

When it comes to the future landscape for lawyers and law firms in Nevada, Woodbury believes it will be challenging. He cites that the compensation for beginning lawyers has been stagnant and even down for the past five years and law school enrollments are also down. The trend for specialization has grown and will continue to grow, as well as the trend toward big multistate firms.

“But I think that there is still a place for a good, solid medium-size firm like ours that has a strong client base and solid reputation,” he said.

Over the years, the law firm of Jolley Urga Woodbury & Little has been approached numerous times by national firms to become their local branch, and by local firms to compete with the national firms.

“We have decided not to go with the trend. Whether that is smart or not, it has worked out OK for us,” said Woodbury.

The firm has a broad-based practice of which real estate and corporate law is a large part. They also do estate planning, probate, bankruptcy and personal injury work. In addition, Bill Urga, a highly respected and former member of the Nevada Gaming Commission, adds gaming and liquor licensing law to the portfolio.

With respect to the UNLV Boyd School of Law, Woodbury feels that students are receiving a high-quality education and are able to compete well with students from other universities. However, the best education usually comes after they graduate with experience.

“UNLV didn’t have a law school when I went to college, so I graduated Stanford and received a very good education,” he explained. “However, I learned far more in my first year or two after law school than I did during school.”

Woodbury did not plan to be a lawyer. He started out thinking that he might be in medicine or dentistry, following in the footprints of his father, an oral surgeon, or his grandfather and three uncles who were physicians.

“However, I didn’t enjoy chemistry lab or zoology classes so I switched major and thought — there is always law,” Woodbury said said with a chuckle, “because you can do a lot of things with a law degree. I probably was regarded as the black sheep of the family by becoming a lawyer — I tell people I couldn’t figure out anything useful to do so I became a lawyer and a politician instead.”

In addition to flood control and transportation planning, Woodbury is also responsible for the clean air we breathe, taking Las Vegas off the U.S. EPA’s nonattainment list while serving as the first chairman of the Clark County Air Quality Management Board and pressing for the county’s Clean Air Action Plan.

Woodbury also served as the first chairman of the Southern Nevada Regional Planning Coalition and served on various task forces and committees that studied the effects of growth. That growth arrived with a bang and Woodbury is looking forward to writing a new chapter in creating infrastructure to match that growth.