Skip to content
Sign up for our newsletter
section-ads_high_impact_1
By BUFORD DAVIS Las Vegas business press
March 27, 2017 - 1:41 am 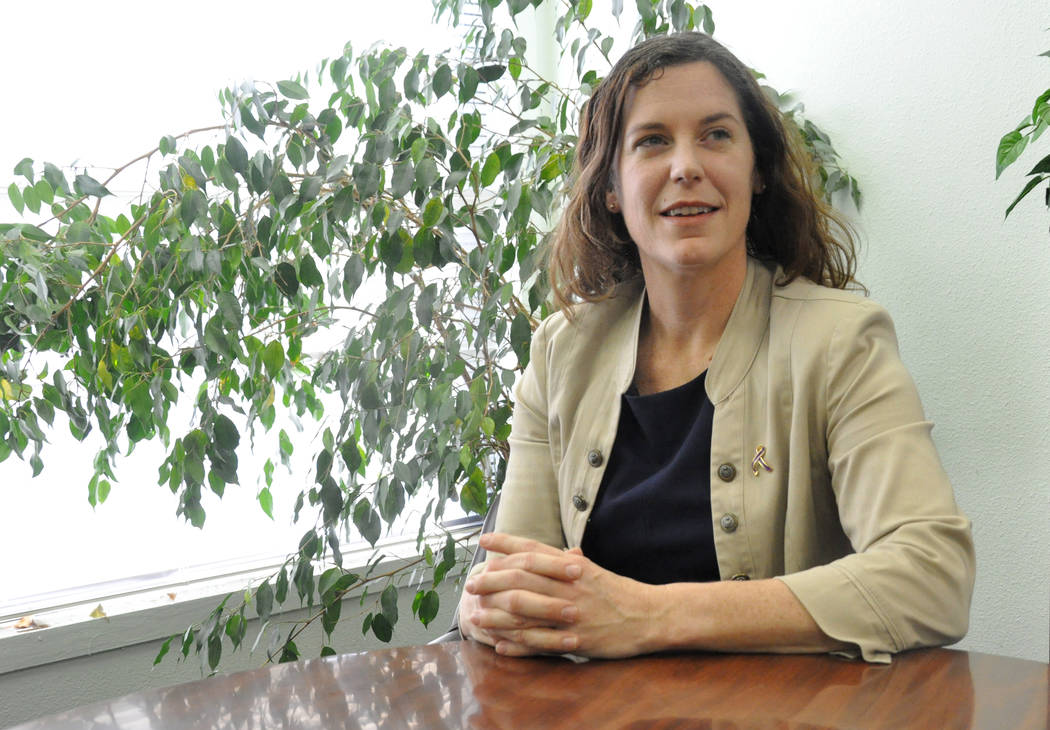 In early March, Liz Ortenburger took the reins as executive director of the Las Vegas-based charity Safe Nest, which provides support and resources regarding domestic abuse issues. She replaces retiring founder Estelle Murphy, who had served in the role since 1979.

Born in England’s Lake District and raised in California, Ortenburger worked for 13 years with Girl Scouts of Southern Nevada, serving as CEO from 2013 to 2016, prior to taking her new position.

Q: Safe Nest has not had a new executive director in 38 years. What are the advantages and challenges about coming into this situation?

A: I think the minuses are that you are stepping in for someone else, someone who founded this organization. Estelle (Murphy) has been with us since the beginning and done tremendous things. Certainly, as a new executive director coming in, that is a nerve-wracking place to be, because there is a tremendous amount of history there and she knows everything inside and out.

The plus, though, is that coming in from a completely different organization with different business elements — the changes that have happened in technology in the industry — you are able to bring it with you to help the organization figure out what the next 40 years are going to look like.

Q: Nevada consistently has one of the highest rates of domestic violence offenses in the nation. What are the reasons for this?

A: My understanding is that Las Vegas, as a municipality, is the third highest per capita for domestic violence in the country. I think there are many factors.

The city tends to be transient, with a lot of folks coming and leaving, so it is difficult to find the consistency of care that helps people actually create a framework to get out of their crisis situation.

In addition to that, we are a fairly low-income population. Domestic violence does not discriminate by income, but folks that need the support and services from organizations like Safe Nest tend to be — particularly in shelters — in our lower income brackets.

Q: About half of Safe Nest’s funding comes through grants and half through public donations. How can the public become involved?

A: There are really three ways the folks can engage with us with a fundraising standpoint. One is, if you have stuff in your house that you do not need, you can call our donation center and we will come and pick it up. Another is to attend one of our amazing events. We have a gala in the fall, and in spring we have the Spring Tea. And the other is to give us straight money, which is fantastic, and you can do that through Nevada’s Big Give. You can always go to our website and click donate.

Q: Thirty percent of Safe Nest funding comes from multiple federal grants, mostly available through the Department of Justice. How concerned are you that the new presidential administration will reduce or eliminate that funding stream?

A:I think that everybody in an organization in the nonprofit world that is focused on funding from the federal government is nervous right now. I think the energy that you saw around the Women’s Marches the day after President Trump was inaugurated is a great indicator of the emotion that is tied to women’s issues.

Q: There is speculation that the Violence Against Women Act, which provides grant funds to Safe Nest and groups nationwide, may be eliminated or greatly diminished as a result of the new federal budget.

A: The Violence Against Women Act is incredibly important funding. If and when that comes up to be floated, we — as well as all of our sister agencies — will start the process of advocacy and bringing our stakeholders together to have a different voice.

We are hopeful that there are enough cool heads and women involved in the administration … we are talking about life and death, and those things need to be funded.

Q: Is it true that it takes about eight attempts, on average, for a domestic violence victim to ultimately leave an abusive situation?

A: The national statistic is that that women go back to domestic violence seven times before they can leave. It is also important for folks to understand that the greatest danger for a victim of domestic violence is when they choose to leave. That is when most of the homicides occur.

As a society, figuring out how do we make it safe for a woman to go, it is a priority for Safe Nest that we are improving on all the time. We also have to look at our judicial system and say, “How do we effectively punish domestic violence in a way that is safe?” Because what we are doing is not working to the fullest extent now. We are seeing the murder rates go up among domestic violence victims locally.

Q: What are some of the things you are doing to try to make this process safer?

A: We look at the continuum of care. If a woman needs to get shelter (the organization currently has 71 shelter beds), then figure out how to get her – and often her children — to a safe place. A victim maybe doesn’t have access to a checkbook, she can confidentially apply for a micro-loan that can get her into her own place.

How does she afford a down payment if she does not have access to her money? How can we help them find those opportunities, be safe and confidential, and get them into a place where they are home? These are all very complex. FWe look at it as not just serving a victim for one night and creating one safe place but creating the continuum of care so that the victim can find her place in the world.

A: We try to define abuse for both our victims and our staff and anybody who will listen. We talk about the power and control dynamic. Is it economic, is it physical, is it emotional, is it sexual? Are the power and control such that one party is solely dependent on the other? When we start to break it down in that way, it is helpful for folks.

Q: Although we think of the domestic violence model being male-female spousal model, with the male being the aggressor; cases stem from a wide range of relationships.

A: Primarily we still tend to see that traditional relationship, but as society becomes more accepting of these realities about domestic violence, then people are more comfortable to use the services. So we do see more same-sex domestic violence calls and the need for support than we did 10 years ago. And that is within the entire LGBTQ framework. We see that expanding the work of Safe Nest and preparing us for the next generation of what domestic violence can look like as well.

Q: You work with abusers also?

A: A lot. Our therapists are trained and licensed and take a lot of courses about aggression. The therapists work to help abusers recognize their triggers, help abusers figure out how they are going to not abuse.

Many of our abusers come through court-mandated counseling. We try to create a dialogue in which they accept responsibility because that is step one for being able to change behavior. But it is not an easy road, and sometimes it is three steps forward and two-and-a-half steps back.

The counselors tell me they have much better success with people that come to counseling voluntarily than those who are court-appointed. That does not mean court-appointed cases can make no difference, but there is a better path to success.

Q: Tell us a little known, and preferably, shocking secret about yourself.

A: (laughing) While I was with the Girl Scouts for 13 years, I cannot make a fire, and I do not really like cookies!