Skip to content
Sign up for our newsletter
section-ads_high_impact_1
By Stephanie Annis Special to the Las Vegas Business Press
January 12, 2015 - 3:15 pm 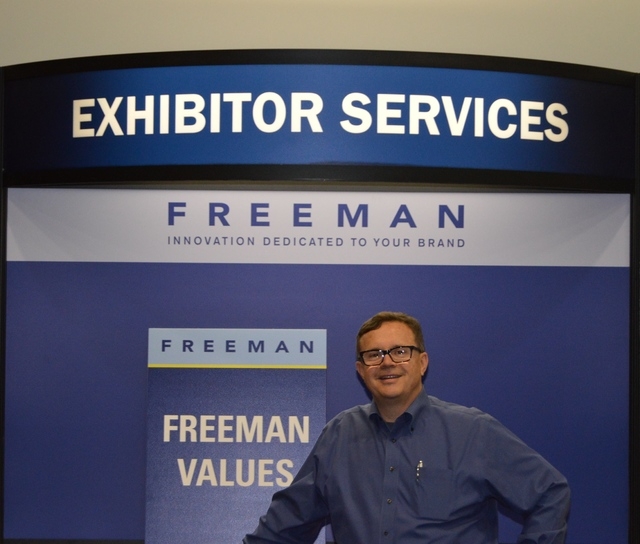 He’s vice president of sustainability for Freeman, the Dallas-based company that describes itself as the leader in face-to-face marketing. From its Las Vegas facility on West Sunset, Freeman provides tons of materials to trade show exhibitors.

And Chase wants to make sure as little of that material as possible ends up in a landfill.

That’s a tall task at events like International CES, the consumer electronics event that wrapped up last week at the Convention Center, the Sands Expo Center and Aria.

Chase is a veteran at staging trade shows and conventions. He was working for Champion Exposition Co., focusing on green events, when the firm was bought and absorbed by Freeman in 2011. As he became integrated into Freeman’s business, he realized the vast array of “green” opportunities already in place.

He began to see all the different areas in which Freeman already had sustainability efforts, he explained. “It’s like opening this big cupboard with all these green things.”

When Chase started, he was “only able to identify about 20 shows — less than $100 million worth of business” ­ that could be considered green. Today, he can identify “85 accounts which is worth about $350-$400 million worth of business” that are green. He explains that companies “like Microsoft where asking for sustainable things to happen and Freeman was doing them but no one was talking about it.”

Chase says sustainability “is not always profitable but cost neutral” is the goal.

He explains Freeman operates a triple bottom line method; focusing on people, plant, and profit at the same level when making any business decisions. “Whenever we make a company decision,” Chase explains, Freeman wants decisions that “benefits our people, that the Earth is taken care of, and we have to make some money, so profit.”

For last year’s CES show, Freeman was able to reach “65 percent diversion rate” for bulk trash, which means only 35 percent of waste was taken to the landfill while 65 percent was recycled.

“We’re trying to beat that this year,” Chase says, pointing to a goal of 75 percent diversion of bulk trash.

“This is all driven by our clients,” he explains; they requested green efforts and Freeman is working to coordinate efforts with everyone involved.

The challenge is “the amount of waste that’s left from a show,” Chase explains. And one of the places targeted for improvement is printed materials. “An awareness campaign” encourages everyone to consider the “pack in, pack out” philosophy. For example, if a show is expecting 3,000 people, exhibitors don’t need to print 3,000 flyers because not every person in attendance will make it to that one booth; they may only need about 1,000 flyers.

“Working with exhibitors is a key component,” Chase says. Last year, Freeman “tested the waters” on encouraging recycling and this year a formalized program has all the vendors looking for solutions.

Freeman has some allies in the effort.

At the Sands Expo, the Sands Eco360 Global Sustainability Program focuses on ways to eliminate waste. Lisa Witherell, the director of sustainable operations, recalls: “Last year, when there was flooding at the reservation in Moapa, we delivered several thousand square feet of leftover visqueen that helped the Red Cross in their repair efforts.”

Carpeting and plastic visqueen (a plastic floor covering) are two of the major items that need to be recycled. A Sands employee found a way to recycle the plastic visqueen which is now donated to farmers for use in the fields. The farmers are thrilled to have this material because they usually have to pay for it.

Finding new homes for leftover goods is also a solution. Several booths will be donating leftover materials to Habitat for Humanity or Opportunity Village.