Skip to content
Sign up for our newsletter
section-ads_high_impact_1
By VALERIE PUTNAM SPECIAL TO LAS VEGAS BUSINESS PRESS
March 13, 2018 - 1:38 pm 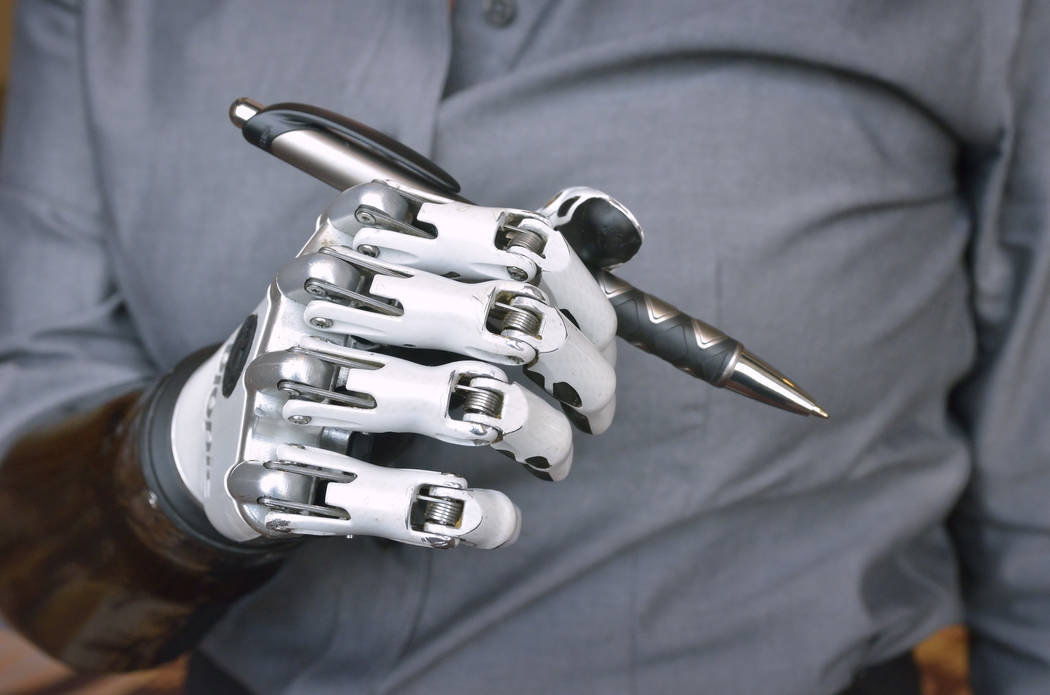 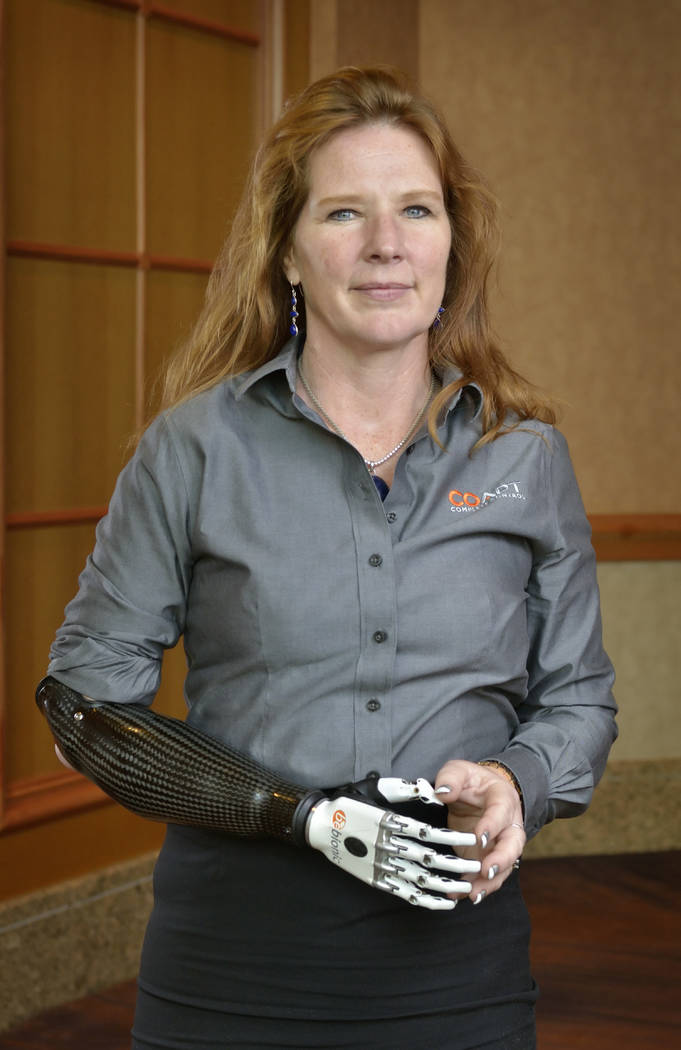 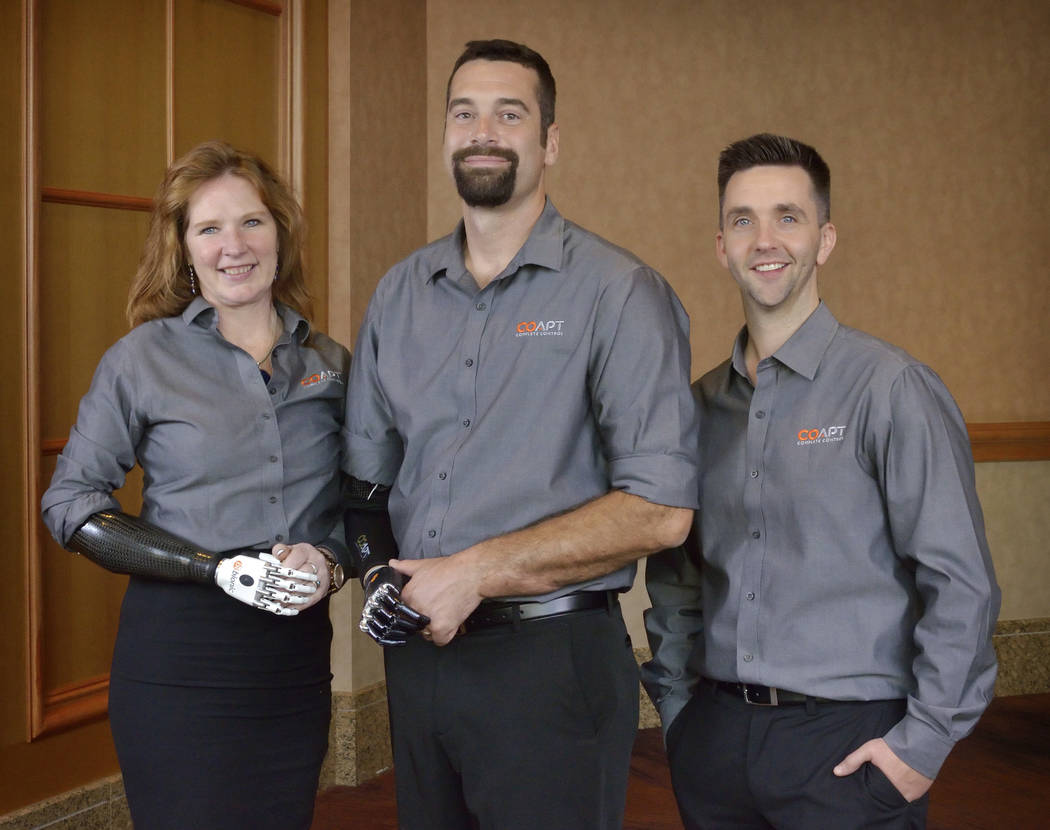 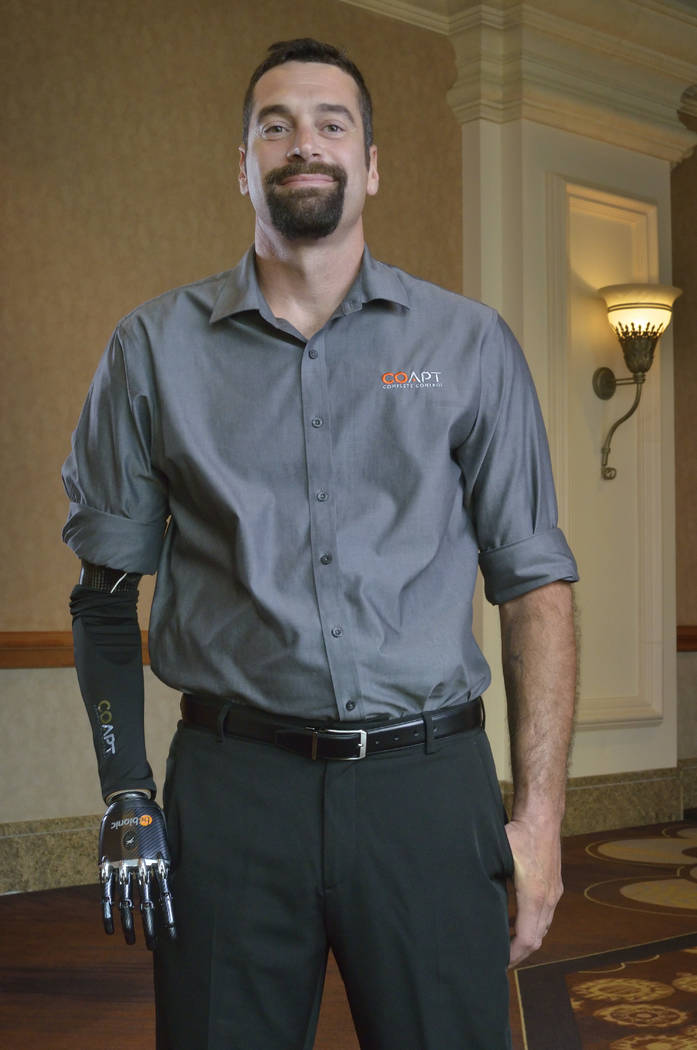 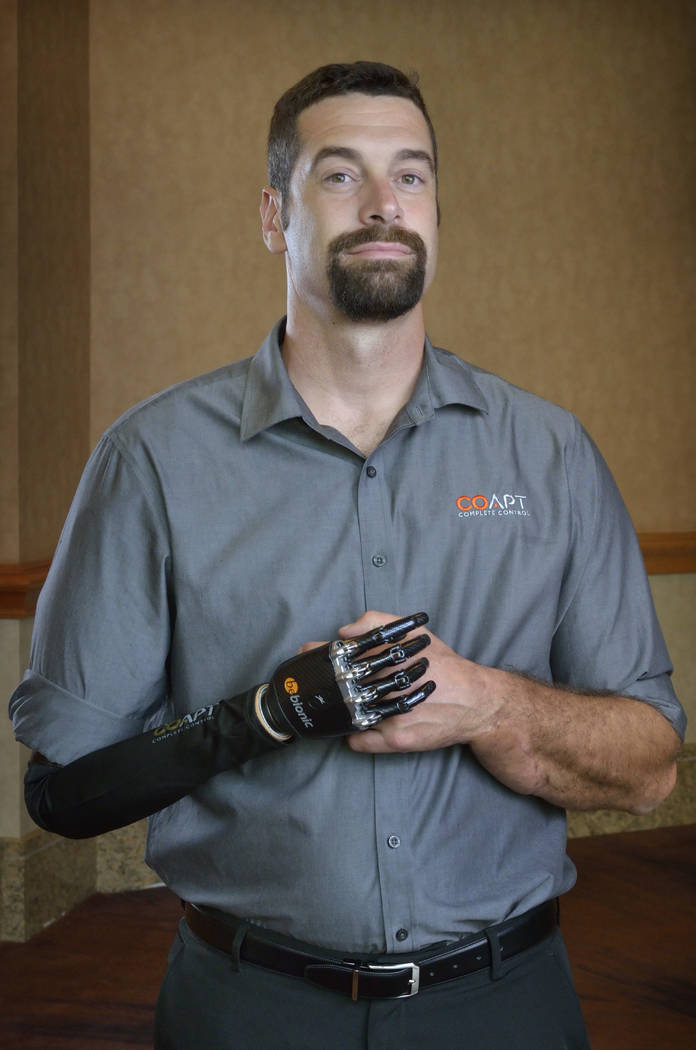 Jodie O’Connell-Ponkos will never forget the first day of summer before entering her junior year in high school 32 years ago.

On that day she was working at a deli in Bradford Connecticut. While pushing meat into an active meat grinder, her fingers got caught pulling in her arm. Losing half her right arm and hand, O’Connell-Ponkos had to learn to do life differently — choosing to go without the use of a prosthesis.

“I struggled with it,” O’Connell-Ponkos said about her artificial limb. “I was always taking it off and putting it back on, trying to get the sensors to line up. I did not like it.”

Her view on prostheses changed about two years ago when she learned about andeveloped by Coapt, a small niche company based in Chicago.

“I started seeing it on social media,” O’Connell-Ponkos said about how she found Coapt. “I found a good prosthetic office to work through and they set this whole system up.”

Coapt’s Complete Control system allows the amputee control over their device through their thoughts.

“It’s the first of its kind of technology,” Coapt CEO Blair Lock said. “Not just by what it does but in our field. I think that it has signified a change, the start of a different direction to be more connected to the human body.”

“This is a big game changer,” Lock said. “Because you just think about it and do it.”

“The system runs on similar mathematical algorithms to voice recognition systems but has to do so with more challenging input signals,” Lock said. “Every intended arm or hand motion gives off a subtly different pattern or signature of muscle signals. It’s like every muscle is a different radio station and they’re all playing at the same time.

“Muscle signals recorded on the surface of the skin occupy what we would consider a very low-frequency spectrum,” he continued. “From about 10 to 500 hertz, similar to the low notes we hear in music.”

Going through a set of programmed movements, the user gains proficiency controlling the limb. The first time O’Connell-Ponkos was fitted with a test socket, she was stacking cups and moving blocks.

“It wasn’t long before I started figuring out how to do more,” O’Connell-Ponkos said about the ease of use. “Putting my hair into a pony tail and tying my shoes.”

“The more you practice the muscle activity of controlling the (device), the better your body adapts to it,” Lock said. “And changes the way you’re doing it.”

It also functions with different degrees of amputation.

At the convention, O’Connell-Ponkos and Retired U.S. Army Sgt. First Class Glen Lehman — both considered Coapt Patient Advocates — showcased different ways the technology can be adapted. Turning their hands or moving their arms naturally without much thought.

O’Connell-Ponkos’ device is attached below her elbow. Lehman lost most of his right arm when an improvised explosive device exploded his Army convoy in Iraq. His device is attached above the elbow incorporating a more complex set of motors including an elbow joint.

“It’s simple, fast and intuitive,” Lehman said about his Coapt device. “I have seamless sequential control and access to all my motor movements at one time. Normally with a prosthesis you would have to switch or sequence through.”

A recalibration function allows the user the ability to reprogram the arm with a touch of a button. The recalibration runs through specific programmed movements while the user mimics the movements in their thoughts. The system adapts by listening and learning the signals for each muscle movement.

“The control and power are back with you,” O’Connell-Ponkos said about the recalibration function. “It makes you want to wear it. It’s not a tool for me but an extension of who I am.”

Coapt’s Complete Control system can be adapted and tailored to any prosthetic arm manufactured. Movement is dictated by the type of device the amputee is wearing.

“We don’t fabricate the parts and pieces you see,” Lock said. “We just make the brain for that system.”

“You can’t put a price on it for what it does,” O’Connell-Ponkos said. “The quality of life and what it gives you back its pretty amazing.”

Coapt’s system and several stainless-steel sensors are housed under the plastic outer shell of a prosthetic arm.

“Coapt’s technology is relatively small,” Lock said. “It is about the size of a pack of chewing gum, weighs a few ounces, and has about the same memory capacity as a smartwatch.”

The 3/8-inch circular metal sensors connect with the user’s skin to analyze electrical information from the brain toward the missing limb. This allows the person to perform complex motions naturally. The device houses four bendable, rechargeable batteries with voltages that range from 6 to 14.4 volts. The batteries are good for up to eight hours of use and last approximately 18 months.

“The Coapt system works with any of the prosthetic device batteries on the market,” Lock said. “One of these options happens to be a flexible cell technology. The flex batteries are quite thin — like the thickness of a leather belt and have a rectangular shape similar to a business card.”

According to Lock, the specialized technology Coapt markets and sells is a product of 30 years of research, designed specifically to control arm prosthetics.

“It’s traceable back to the 1960s,” Lock said. “One of the earliest knows areas this was looked at was a research group out of the U.S. Navy. They were looking at doing this thing with human body signals to control underwater submarines.”

“It’s been a global effort for decades,” Lock said. “Mostly academic research groups. There wasn’t one clear entity that we can point to and say they started it.”

Lock first learned of the academic research when he went to work for the Rehabilitation Institute of Chicago (RIC) in 2005. He realized it was time to release the software after years of successful clinical trials and medical professionals requesting the software.

“For many years we said its only a research study, have to wait,” Lock said. “Until it got to the point we realized no one was going to end up doing it. They’re (RIC) not a commercialization entity. We were the ones that also invested in it so why don’t we try to spin this out.”

Lock, along with co-founders Todd Kuiken, Levi Hargrove and Jonathan Sensinger formed Coapt in 2012, releasing Coapt software commercially the following year. Lock is the CEO and active partner in commercializing the product.

Coapt signed a traditional licensing agreement with a royalty going back to RIC per device sold. Coapt sells the devices to medical professionals trained to fit amputees, who can attain a Coapt device through a prescription given by their physician.

Coapt is selling the devices in the United States, Lock estimates they reach between 300 to 500 patients a year, 10-15 percent of the market share. Lock plans to expand globally this year after releasing a second generation of the software. The expansion will be executed through regional distributors.

“We don’t want more people to need this,” Lock said. “But we certainly want to serve the amputees the best we can.”

Earning approximately $2 million in annual revenue, the company employs 10 employees. Funding comes primarily through commercial revenue with 15 percent of it coming from grants and paid research.

“We’re a cash-positive company,” Lock said. “What we licensed to start this was a turn key platform. We started the company selling product so we are financed through our commercial revenue.”