Skip to content
Sign up for our newsletter
section-ads_high_impact_1
By Buck Wargo Business of Medicine
December 5, 2017 - 8:53 am 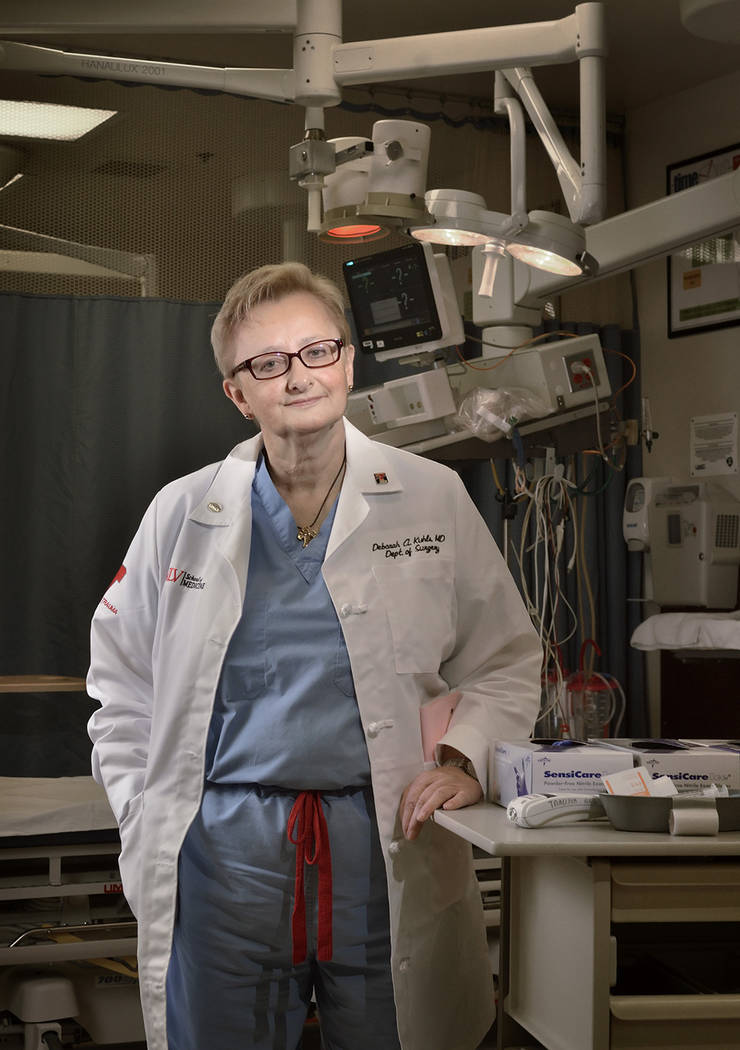 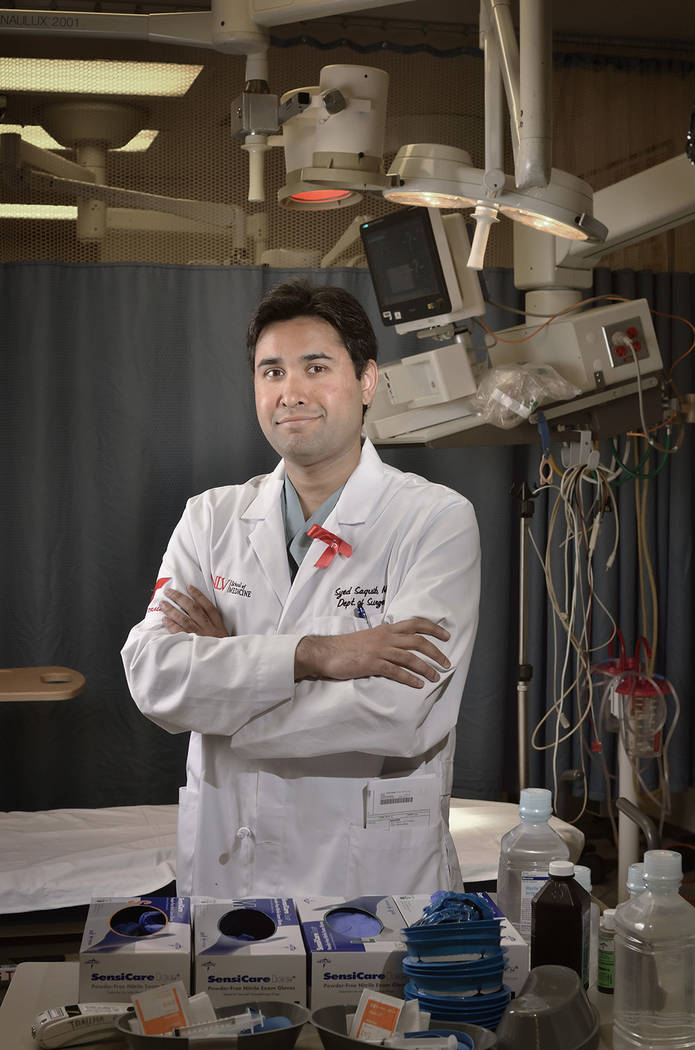 They work at different hospitals, but Dr. Alan MacIntyre and Dr. Syed Saquib shared a common bond Oct. 1 — they were two of the first trauma surgeons on duty waiting for a rush of causalities from the mass shooting on the Strip.

The doctors have dealt with multiple gunshot wounds and accident victims at Sunrise Hospital and Medical Center and University Medical Center, but this was a night like no other for them and other medical staff at Southern Nevada’s two leading trauma centers. It will forever define the careers of doctors, nurses and other staff, and it has left a mark on health care workers who are emotionally recovering from the ordeal as well.

MacIntyre got a call just after 10 p.m. on Oct. 1 to “get ready.” He had been on duty since 7 a.m. as part of a 24-hour shift when he got a page letting him know what was coming — “mass casualty, multiple gunshot wounds.” It was like nothing the 51-year-old surgeon had ever seen.

MacIntyre walked over to the Sunrise trauma bay to put on his surgical attire and waited until the victims arrived. The first came in pickup trucks and vans. When ambulances arrived, they were packed full of people.

“I got a lot of training in trauma and mass causality through the years, and we never expected that volume,” MacIntyre said. “You never get trained on what to do with 200-plus patients.”

MacIntyre proceeded with surgical triage to determine which patients were the most critical. There were several gunshot wounds to the head. They were given pain medication, intubated and moved into the trauma intensive care unit until the neurosurgeons arrived. He did the same with cardiothoracic gunshot wounds and with those shot in the abdomen, directing the flow of patients for more than six hours.

The 35-year-old Saquib, who has been at UMC a little more than a year, had been on duty for three hours when he got a similar notice of “a mass casualty situation from the Las Vegas Strip.”

Dr. Deborah Kuhls, chief of critical care in the surgery department and professor of surgery at the UNLV School of Medicine, was supposed to complete her shift at 7 p.m., but was still working with her team and had yet to leave UMC.

Both Saquib and Kuhls sprung into action and implemented the mass casualty plan for which the hospital had been practicing for the dozens of wounded they expected. Kuhls triggered the contact of doctors, nurses and other staff.

“That we had two teams there was very fortunate,” Kuhls said. “It allowed us to sufficiently handle the first people who came in. We went from zero to 10 patients in five minutes, and then it was 50 to 100,” she said.

“Every bed was soon taken. Patients waited in the hallway, some sitting down with bandages on and waiting to receive medical attention. It was what we called controlled chaos. After we got all the people to come in, which they did in a very timely manner, we were in pretty good control shortly thereafter.”

UMC got more than 100 patients, the overwhelming majority of them gunshot victims, said Saquib, who performed one of the first surgeries that night for a patient shot in the abdomen.

“Those we could save we did save,” Saquib said. “There were very few patients that had some devastating injuries that couldn’t be rescued. As much as we are saddened by these events, I’m glad (I) and my colleagues were able to make a difference and to help people out and try to save as many lives as we could.”

MacIntyre said 15 patients were dead on arrival at Sunrise, but the staff was able to care for others who arrived with four health care providers for every patient. He credited their drilling with helping prepare them for the deadliest shooting in modern U.S. history, and he looks forward to sharing his knowledge in presentations to doctors and by publishing papers.

It’s “simple stuff,” MacIntyre said. He said he would have moved all the carts in the trauma bay into the hallway because the patients arrived in carts and caused clutter. The biggest lesson, however, is what he learned about himself.

“I always wanted to be a surgeon and was always interested in trauma, so it was a great fit for me,” MacIntyre said. “This has taken me to the next level. If I get another mass casualty incident, I have learned a lot and was exposed to a huge volume of people and how do we move people through the system. You can’t teach that.”

Trauma doctors have to stay calm amid the chaos to do their job to the best of their ability, Saquib said. His thoughts going through his head, he said, were to stay organized and focus so he could best help his patients.

Saquib said he was aware of the amount of people who died and were injured, but he didn’t dwell on that too much.

“A few days later when I was watching CNN and Anderson Cooper went through, one by one, the people’s names who died and a testimonial from their loved ones. That’s when it hit me about the enormity of the situation,” Saquib said. “That’s when my heart sunk for those folks. It made it very personal at that point.”

Methodically managing a mass casualty was a mental test, Saquib said, but after going through the ordeal, he said he feels like he can handle any trauma incidents that come his way. He hopes, however, he never has to do so on that magnitude again.

One of the lessons Saquib said the medical community is learning is the importance of hospital staff and health care workers taking care of one another from a mental health standpoint. He said he appreciated the gesture of a co-worker giving him a day off after he got six hours’ sleep in 48 hours.

“This has been multiplied many times over in the community to make sure we take care of each other,” Saquib said.

Most doctors will “do pretty well” with coping based on their experience, but some could deal with problems with relaxing or losing sleep, according to Lesley Dickson, executive director of the Nevada Psychiatric Association.

Alison Netski, who chairs the department of psychiatry and behavioral health at the UNLV School of Medicine, said she’s spoken to health care professionals who’ve worked the mass shooting, and some continue to have feelings of anxiety and feel like they’re reliving the whole night of gunshot victims coming in and thinking about those they saved and those they couldn’t.

“I think people who got into this field have an overwhelming desire to try and help people, and when you feel you couldn’t help everybody, then people struggle with guilt,” Netski said. “While it’s easy for all of us from the outside to say that’s misplaced guilt because they saved so many people, that’s not an uncommon reaction. Everybody in the community is feeling tremendous sadness and anxiety and anger about this whole situation, but for a certain group of people who witnessed the severity of these injuries and saw this horror firsthand, it’s very traumatizing. It’s one thing to deal with a gunshot victim when you have one, two or three people and you are fully staffed and fully ready and you can easily manage the small amount of chaos, but to have over 100 at UMC and 200 in the case of Sunrise, nobody does that all the time. Someone was successful at inflicting a tremendous amount of terror on a community by injuring hundreds of people, and sometimes that’s hard to take.”

Dr. Douglas Fraser, vice chief of trauma at UMC and section chief of trauma at the UNLV School of Medicine, said some residents in training have had trouble sleeping and recurring nightmares after seeing so many gunshot wounds. There’s a concern because some residents who dealt with the Pulse nightclub shooting in Orlando in June 2016 got divorced, quit medicine or changed their residency because of the stress over the constant reminder of working in a trauma center.

It’s not only doctors who are impacted but also nurses and housekeeping staff who had to clean up, Fraser said.

“No one thinks about that stuff, but they’re going home and maybe they’re having nightmares because they had to clean up, and that was overwhelming,” Fraser said.

The 39-year-old Fraser said that’s one of the lessons he’s learned over the years working in trauma. He said you see the “worst of the worst,” but doctors need to understand they’re there to help and didn’t cause the injury.

“You have to compartmentalize that for yourself to have sanity and continue to do your job,” Fraser said. “It’s very stressful, even going on rounds and seeing them in their purple wristbands from the concert and seeing marks of triage on them and listening to the stories of the families there.”

The media attention has turned away from Las Vegas to other events, but therapists will be busy for years helping those impacted by the shooting, Fraser said.

Surgeons even had to serve as on-the-spot counselors, Fraser said. He had a case with two sisters who each thought the other one was dead. One bought tickets to the Route 91 Harvest country music festival for the other and felt guilty when she was hurt.

“Stuff like that tears at your heartstrings,” Fraser said. “I not only had that patient but the whole family and sister in need who become another patient in the room. I was trying to coach here how that was a nice thing she did and it wasn’t her fault but a crazy person who did this. I told them they had to talk about it and not sit here in silence.”

Saquib said he’s impressed how the community banded together to deal with the tragedy. It goes beyond the hospital staff to the first responders who risked their lives and good Samaritans who helped strangers.

“I felt we had a tragedy but met the worst in humanity with the best in humanity,” Saquib said. “We should never forget what happened, but the response we had not just in the medical society but in the community has been phenomenal. We had 22,000 people helping each other out. And what we’ve all seen from the hospitals is show we’re not just a tourist city, although we appreciate tourists. We’re a community, and we’re united in the face of adversity. I’m proud to see that happen.”