Skip to content
Sign up for our newsletter
section-ads_high_impact_1
By Buck Wargo Business of Medicine
December 11, 2017 - 2:54 pm 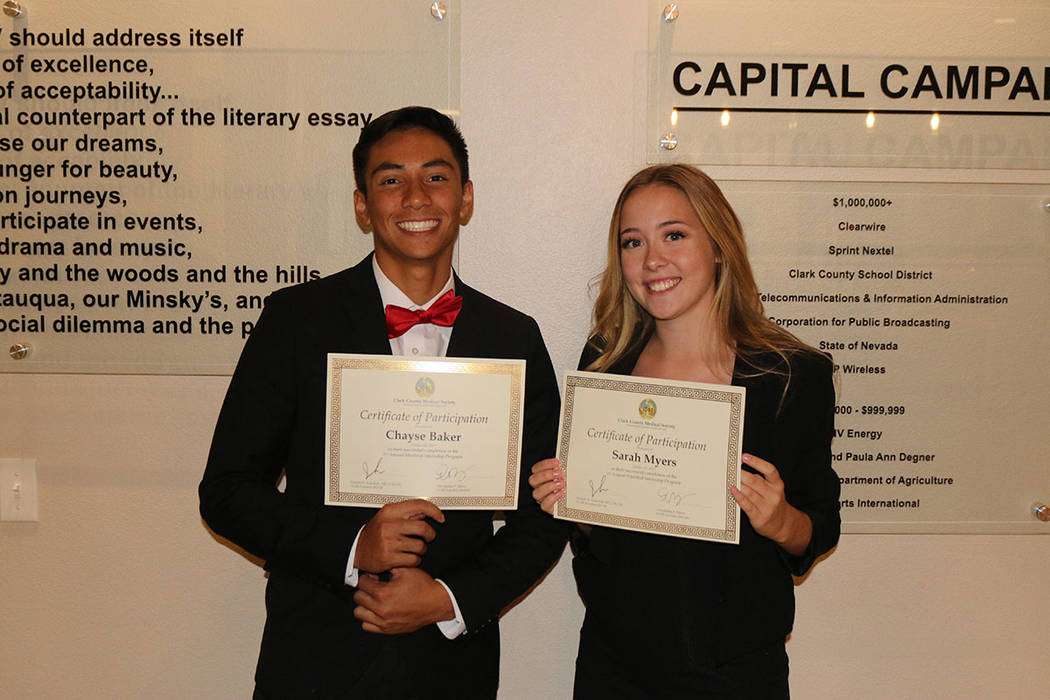 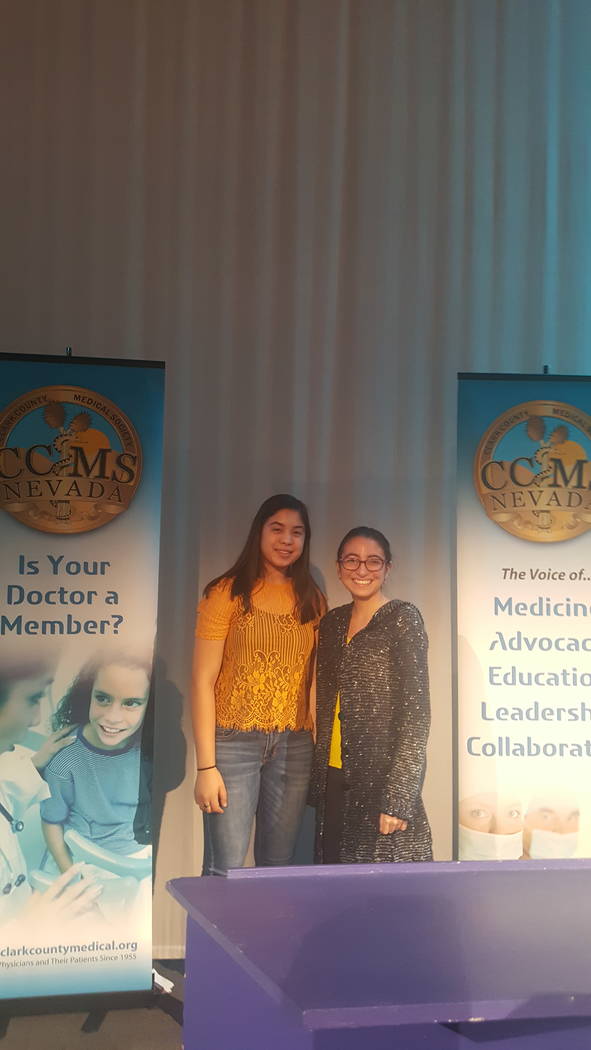 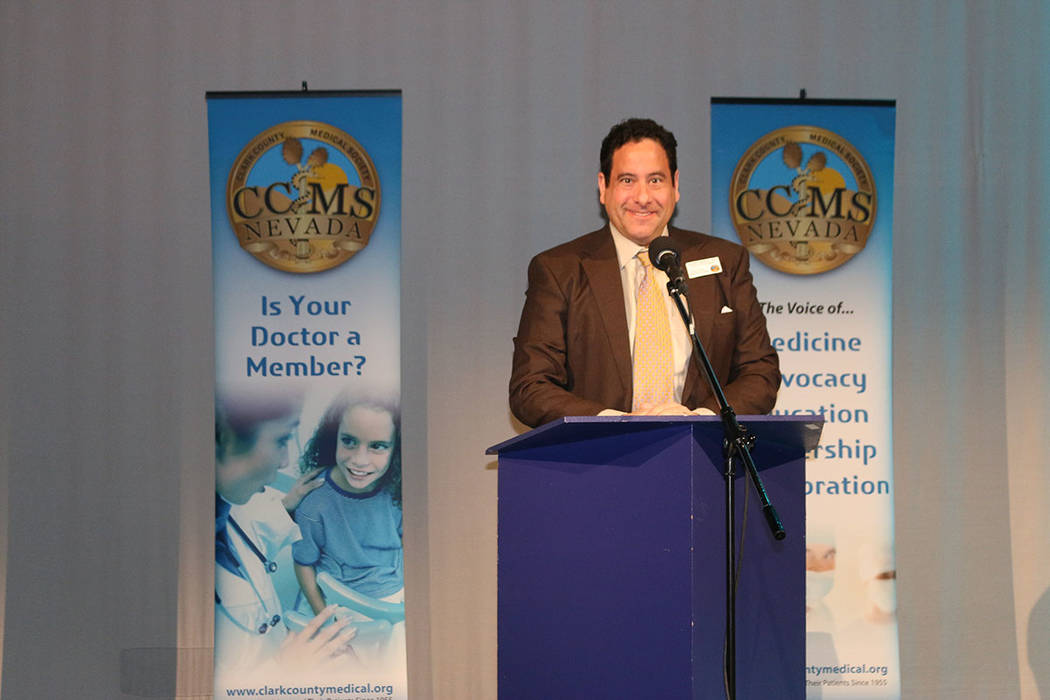 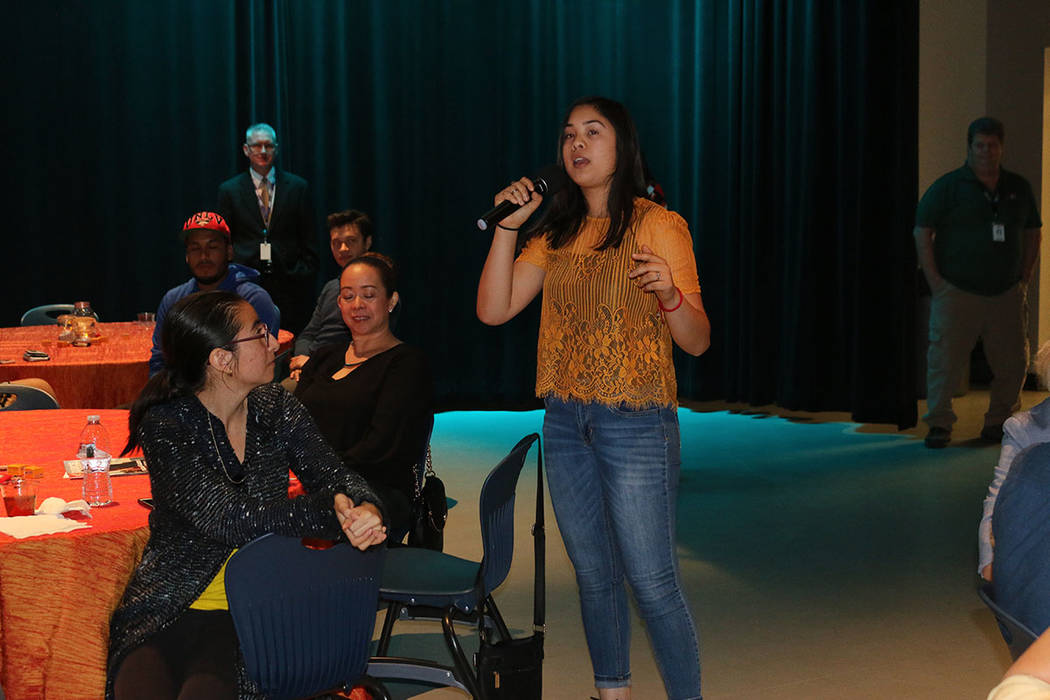 Briana Santana, 17, talks to other students about why she wants to be trauma doctor. (Clark County Medical Society) 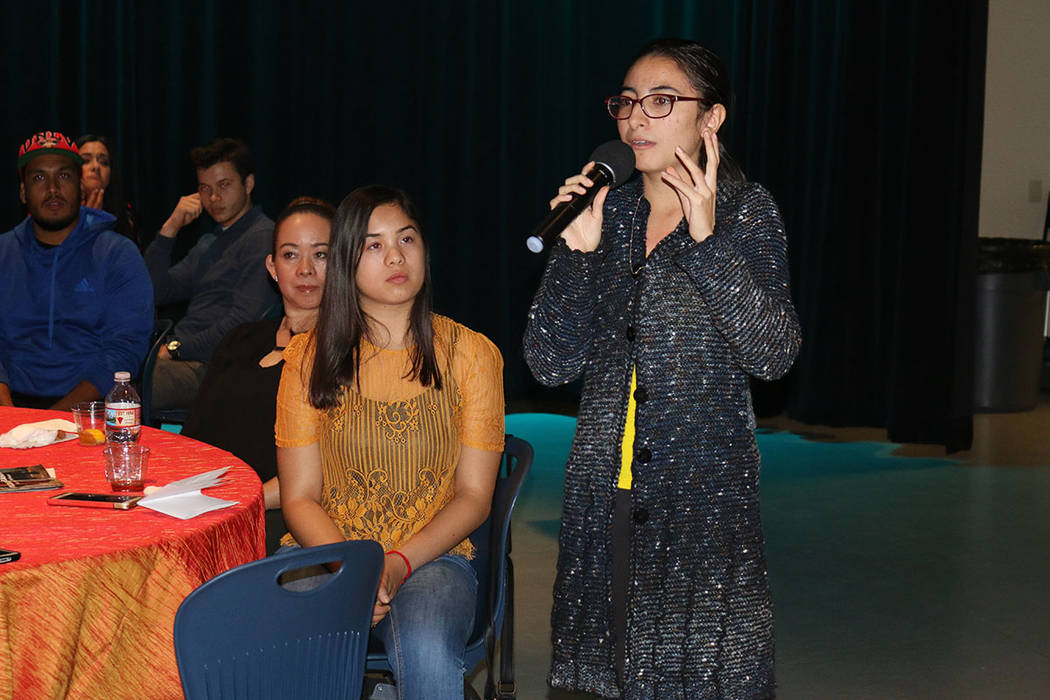 The medical profession’s response to the Oct. 1 mass shooting in Las Vegas has only confirmed to Clark County high school students like Briana Santana that they’re making the right choice to pursue a career in medicine.

The 17-year-old senior at Southwest Career and Technical Academy was one of 70 high school juniors and seniors who shadowed doctors as part of the third annual MiniMed internship program sponsored by the Clark County Medical Society.

The goal of the program is to inspire the next generation of doctors and health care professionals in Clark County, especially in light of the region facing one of the biggest physician shortages in the nation.

Santana had already wanted to pursue a career as a trauma doctor after watching medical-based television shows and seeing the profession up close a few years ago after her dad was injured in an accident with a saw. She witnessed how a team worked together under pressure situations and how they made a difference in people’s lives. What she saw unfold Oct. 1 and beyond convinced her she’s making the right choice.

Santana wants to attend UNLV next year and ultimately attend the UNLV School of Medicine to purse a medical degree.

“It makes me more motivated to go into that field,” Santana said. “I know I’m able to help people affected by situations like that.”

Santana and her classmate, Kelly Trigueros, a 17-year-old senior, participate in a nursing program at their school. Both shadowed bariatric surgeon Dr. Thomas Umbach as part of their mini-internship.

“I learned a lot and was astonished how they were in unison and people working together,” Trigueros said. “It was teamwork with nurses very involved with surgeons and how everything was organized and how strict they were about the safety of the patient.”

Trigueros wants a career in pediatrics because she loves working with kids. She said she’s aware of the physician shortage in the state and feels she can “make a difference.” She’s applied to attend UNLV for an undergraduate degree and said that, in the aftermath of the Oct. 1 shooting, she’s making the right choice.

“It inspired me even more, because it made me realize that a lot of health care workers are needed for that type of crisis,” Trigueros said. “We need brave people to go and help out. It was the same with Hurricane Harvey, when nurses and doctors took care of people. It inspires me to become a doctor and help those in need.”

Santana’s and Trigueros’ instructor, Kathy Strader, a registered nurse who teaches freshman introduction to health occupations and seniors in the certified nursing assistant program, said students were impressed with first responders and those who work in health care and how professional they were in dealing with the mass shooting.

“I think some of the students felt more than ever that they want to go into health care because of how people responded in that setting and how the community helped each other,” Strader said. “They were inspired how strangers helped strangers with no first responder skills. Overall, it did impact them in a number of ways.”

CCMS Executive Director Alexandra Silver said the tragedy of the mass shooting showed how the health care community “rose to the occasion” and showed the city and the world Las Vegas has world-class medical care. The students “are our future” and will help build the medical community, she said.

Dr. Joseph Adashek, president of the CCMS, said students have seen what’s been accomplished in Southern Nevada with a shortage of doctors and how they can contribute by pursuing a career in medicine. Students who study in Las Vegas and complete their residencies here are more likely to practice here, he said.

Adashek, a maternal-fetal medicine specialist, said the students thought the internships were “the coolest thing they’ve ever seen,” even getting the perspective of how busy doctors are between and after seeing patients.

The students know patients who arrived at hospitals on Oct. 1 had a high rate of survival, and Adashek said that has motivated students and encouraged them.

“They thought it was something they would love to do and help people in an atmosphere like that and make such a difference,” Adashek said. “They were 100 percent inspired by it and thought, ‘Wow. I could do that for a living.’”

One of those is Olivia Norander, a 17-year-old senior at West Career and Technical Academy. She shadowed Adashek and wants a career as a labor and delivery nurse. She has been accepted at the University of Nevada-Reno, where she will pursue a nursing degree.

Norander said she loves the aspect of a labor and delivery nurse as a career of bringing life into the world instead of preventing it from leaving. She said she was inspired by the medical community’s response to the mass shooting and donated food and water to families at the hospitals and the medical staff.

“I think it was amazing how many people stepped up to the plate and took on extra hours and making a difference in saving lives,” Norander said. “It’s one of those things that, when it happens, you feel helpless of not being able to do anything. I think that motivates me to keep going and pushes me to want to help others.”