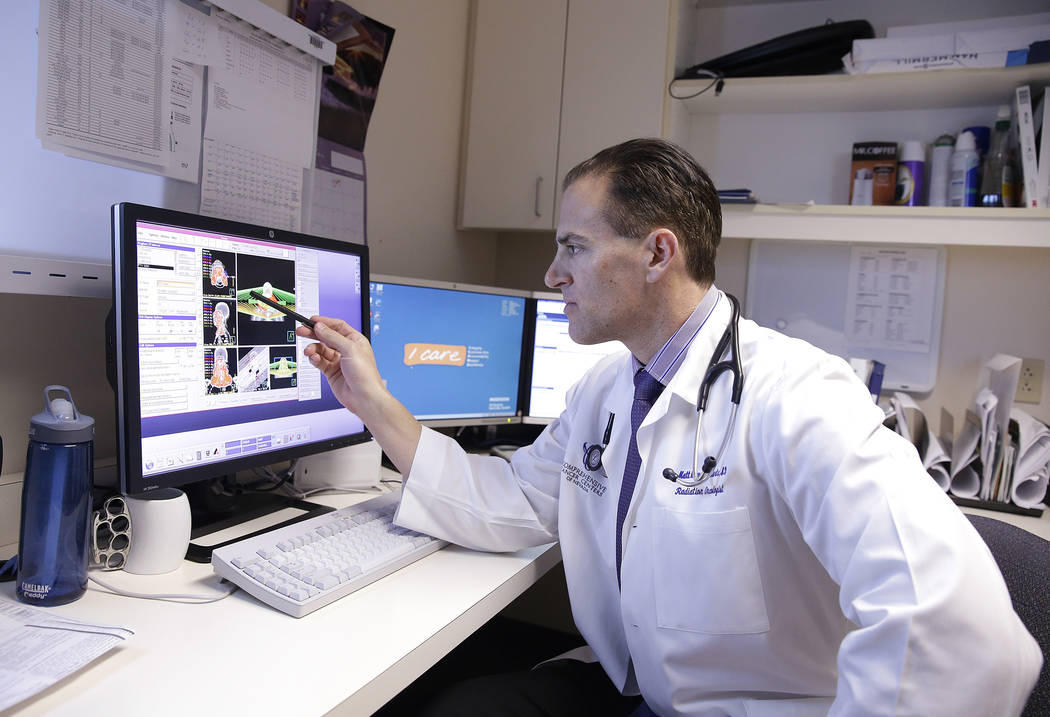 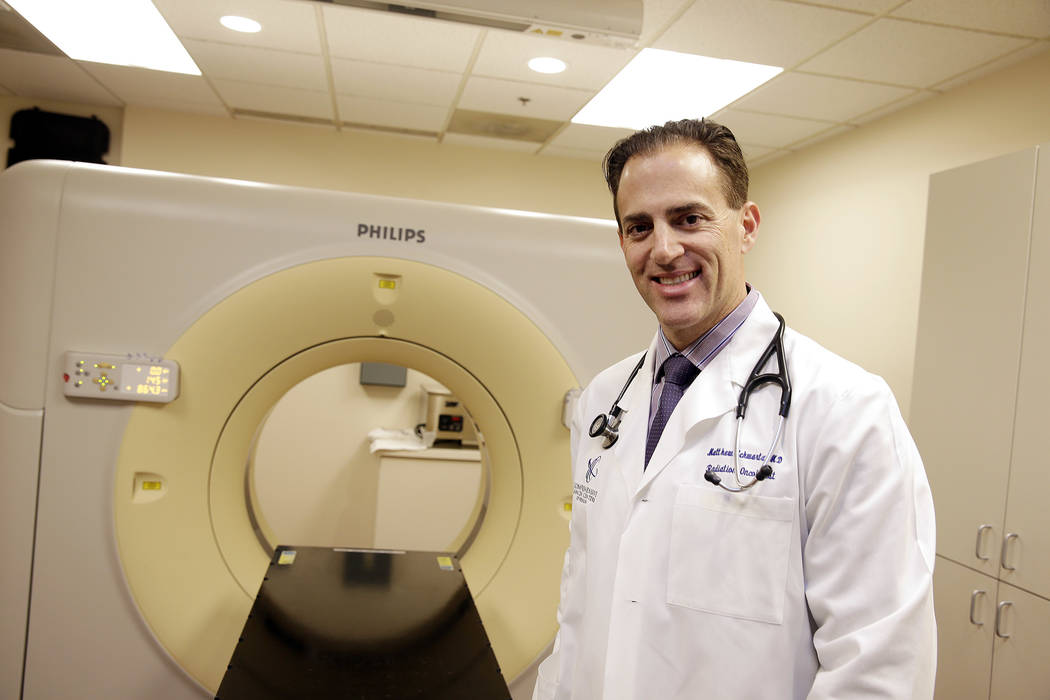 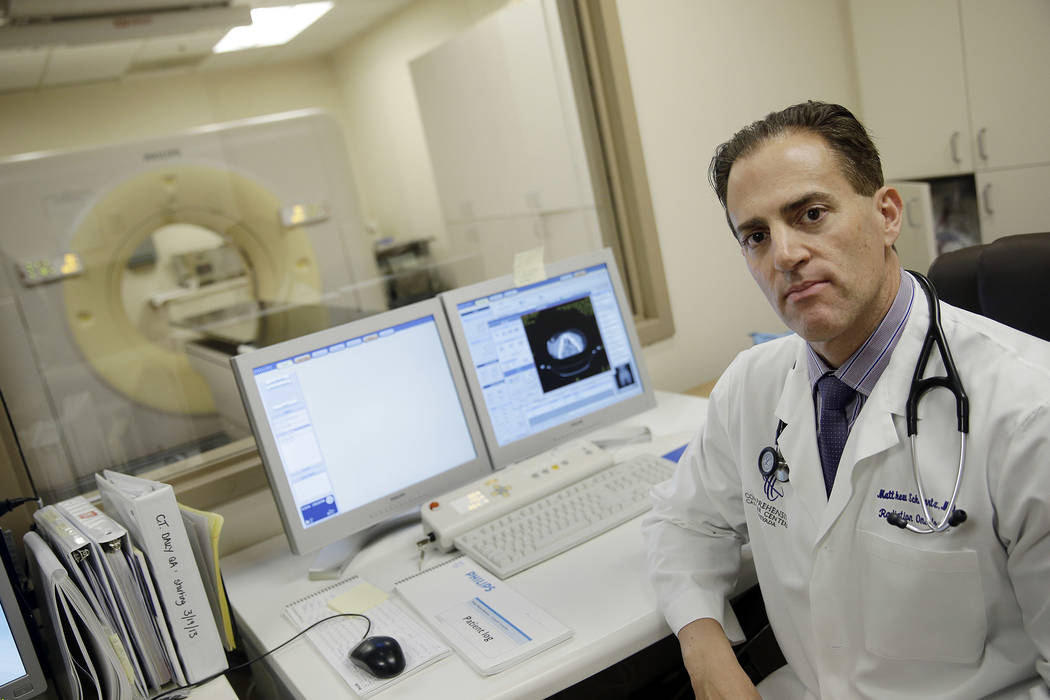 Matthew Schwartz, a radiation oncologist with Comprehensive Cancer Centers of Nevada, said people should look at cancer trends on a nationwide basis and over time. (Bill Hughes Business of Medicine)

Cancer deaths and diagnoses are projected to rise in Nevada in 2018, but oncologists said the best news is that the number of treatments are escalating and more people are surviving longer became of them.

More than 1.7 million Americans will be diagnosed with cancer this year, according to the American Cancer Society. That’s a grim number at first glance but the good news is the cancer death rate has decreased by 1.5 percent a year since 1991.

David Sampson, director of Medical & Scientific Communications for the American Cancer Society, said people shouldn’t draw any conclusions in comparing one year to the next because numbers go up with population increases and as the population ages, deaths and diagnoses will increase.

“Cancer is a disease of aging, and that number goes up when older people are alive, even though the individual risk of dying of cancer goes down,” Sampson said. “People are quitting smoking and with better treatments people are surviving longer.”

Matthew Schwartz, a radiation oncologist with Comprehensive Cancer Centers of Nevada, also said no one should draw on any conclusions based on one year’s statistics and projections. Instead, people should look at the trends on a nationwide basis and over time.

“It’s very hard to discern one state versus the national numbers,” Schwartz said. “I like to look at trends, and my take on those numbers is the cancer death rate is going down, which I believe is due to better treatments and more effective treatments where we cure more cancer and don’t hurt the patient. As a cancer doctor, we’re living in exciting times.”

Schwartz said people should focus on “the big picture that we’re in the middle of a revolution in cancer care” in which more drugs were approved by the Food and Drug Administration last year to fight cancer than in the last 20 years. Comprehensive Cancer Centers was involved in four of the studies approved in 2017, he said. It is involved in 170 drug trials currently.

“Progress is coming to fruition after decades of research, funding, innovation and technology coming together to treat cancer,” Schwartz said. “That means more drugs and more options for patients and means more chances to cure cancers that may have been previously incurable or had minimal treatments. These are all good things.”

Not only are there better and additional treatments, incidents of smoking declining nationwide is why the death rate is decreasing, Schwartz said. He agreed one reason why more people are being diagnosed with cancer nationwide because people are living longer.

“Most patients who get cancer tend to be older because we’re able to keep people alive, and they don’t die of a heart attack, diabetes high blood pressure or other common things that kill people. Those people will now have a chance to get cancer. We believe anybody if you live long enough will probably get cancer.”

Schwartz said people have so many cells in their bodies that are constantly turning over that there’s a small chance of mutation. If an autopsy was conducted on everyone who died of a heart attack, disease or other cause, a medical examiner would find a lot of little cancers of which no one was aware, he said.

Smoking is the No. 1 cause of cancer and lung cancer is at the top of the list of cancers, but obesity is the second leading cause as people’s waistlines continue to rise in Nevada and nationwide, becoming a growing problem, Schwartz said.

“Everybody always focuses on smoking, which is the biggest one, but obesity is the No. 2 preventable cause of cancer, and most people don’t know that,” Schwartz said. “As our population becomes more obese, the risk of cancer unfortunately goes up significantly.”

“Most of them are non-aggressive types and they end up dying from something else,” Schwartz said. “Some of them end up being the aggressive type that can metastasize and do bad things.”

There’s a lot of confusion about screening for breast cancer, and women should talk to their doctor about mammograms, Schwartz said. Generally, women should have them yearly after age 50. Some women should start earlier if there’s a higher risk from family history, he said.

There are other cancer concerns that are alarming with teens, Schwartz said. E-cigarette usage has increased as has vapor products and flavored tobacco.

“The smoking rate has gone down, but the rate of alternative tobacco product use has gone up,” Schwartz said. “That’s a concern because we made so much progress in trying to reduce tobacco use, and it seems like we’re sliding the other way. There’s no safe use of tobacco.”

Comprehensive Cancer Centers of Nevada has teamed with UNLV to reduce cancer deaths with an I Quit For campaign since college students are at risk of becoming tobacco users, Schwartz said. Students are encouraged to use social media to post they have quit using tobacco for someone other than themselves, he said.

“It’s so they can become accountable,” Schwartz said. “We find it help and another way to quit smoking.”

As for the legalization of marijuana for recreational use in Nevada, Schwartz said that’s a touchy subject for cancer patients since it can help selected patients with chronic pain and nausea.

No one knows what the impact of increased marijuana usage will have on the general population because there aren’t any studies, Schwartz said.

“The federal government needs to seriously look at a study to learn what the negative side effects are,” Schwartz said. “There’s no literature on it. It’s a Class 1 drug and that has prevented research from being done.”

Some of the bright spots in Nevada cancer projections in 2018 shows the number of new cases of colorectal cancer will decline. In addition, the number of deaths for lung cancer and non-Hodgkin lymphoma will drop.

There are projected to be 1,120 colon and rectum cancer cases and 520 deaths.

Schwartz credits better screening for identifying cancer cases. Colorectal cancer linked to obesity and as society gets more obese, there will be more cases.

“The number of cases will go up over time, and the death rate will go down as we are screening more and find them it earlier and cure them,” Schwartz said.

One of the new innovations is a low-dose CT scans that help find lung cancer cases earlier. Lung cancer is deadly when it doesn’t get diagnosed until the later stages, he said. Early detection cure rates are high, he said.

“If you don’t know you have it until it’s very advanced, at that point it’s very difficult to cure,” Schwartz said. “If we can find them very early, the cure rates are 80 to 90 percent.”

For those who want to reduce their risk of getting cancer, quit smoking, eat organic, eat less, exercise more as part of an effort to lose weight, Schwartz said.

“Those simple things can make the biggest difference,” Schwartz said. “You can’t change your genetics.”