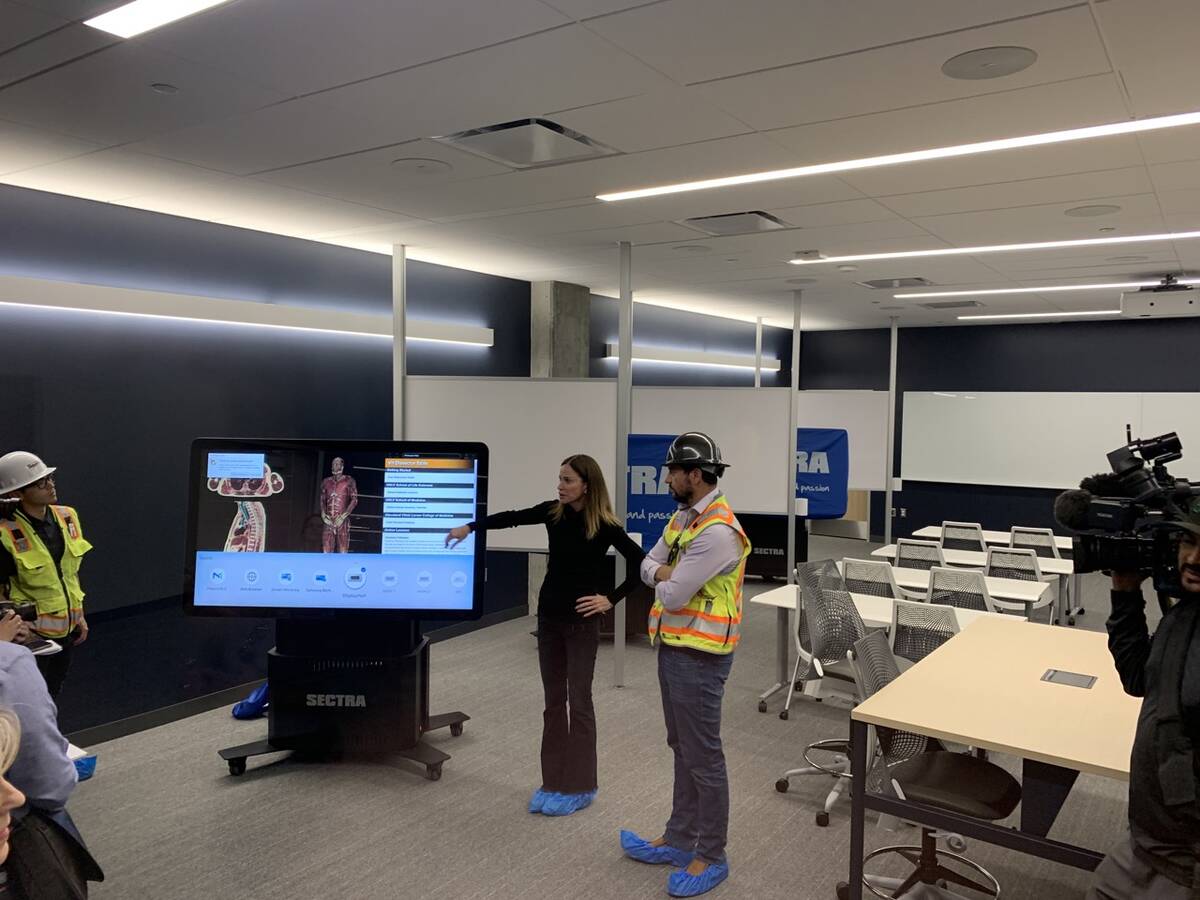 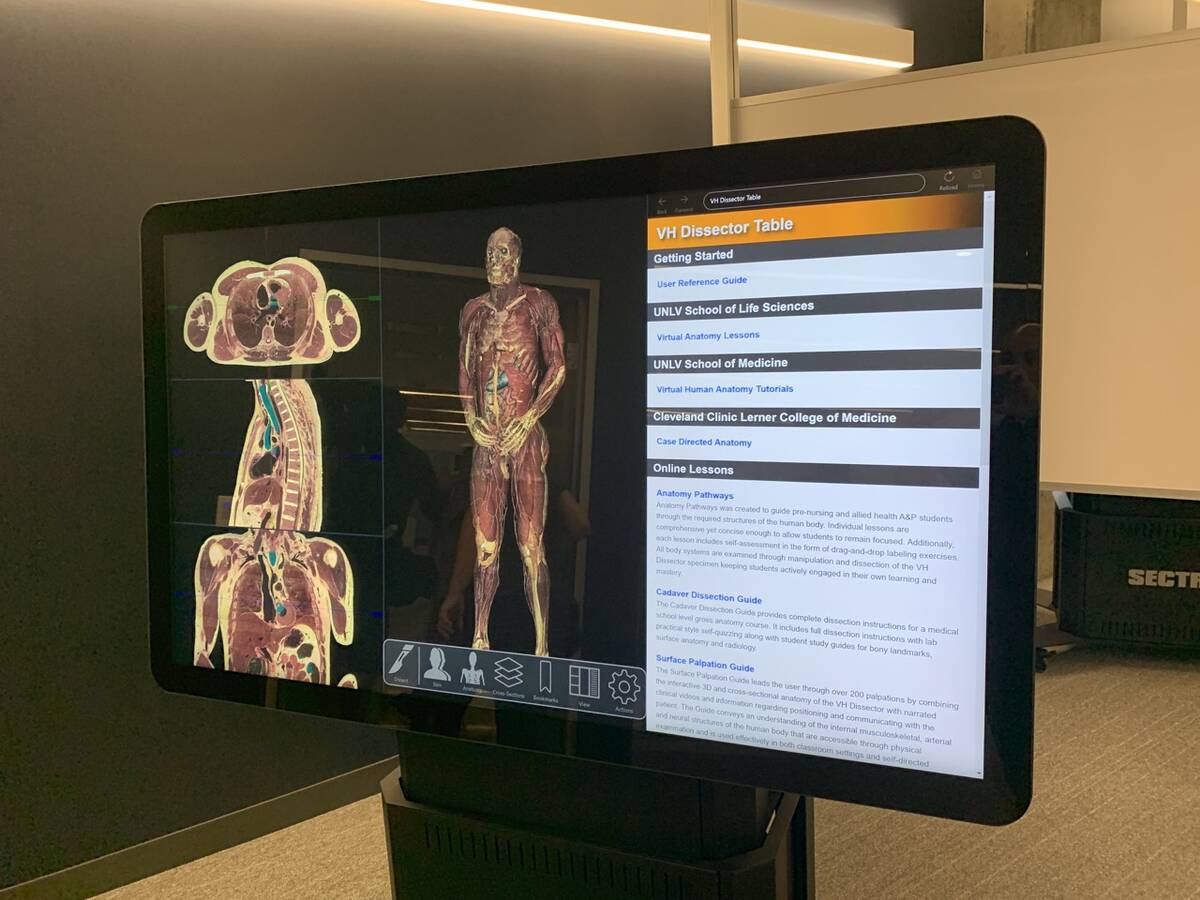 Gov. Steve Sisolak spoke about the legislative appropriation of $25 million with the matching $25 million donation from the estate of Kirk Kerkorian to the Medical Education Building project.

The approximately 135,000-square-foot, five-story medical education building sits on a 9-acre campus at 625 Shadow Lane in the Las Vegas Medical District. Sisolak told the guests that it was the best investment made by the state to develop high-paying jobs for the residents. Sisolak also said the medical school would significantly impact the economic development of Nevada and that it was just a start to building a future together.

Maureen Schafer, president and CEO of Nevada Health and Bioscience Corp., gave the opening remarks celebrating the achievement. NHBC was responsible for funding and overseeing construction of the project. The majority of the project was funded by more than $150 million in private donations, including contributions from the estate of Kirk Kerkorian and Engelstad Foundation, among others. The state of Nevada contributed $25 million to the project and the largest corporate donation, $1 million, came from Bank of America.

NHBC is a nonprofit organization with the mission of developing health care research, education, clinical assets and programming in Nevada. NHBC’s first project was the Kirk Kerkorian Medical Education Building in Las Vegas. The nonprofit received additional funding to build a future ambulatory care clinic and pathology lab on the campus of the medical school. More information is available at nevadahbc.org.

During the event, Lindy Schumacher, a board member of NHBC and daughter of Anthony Mandekic (the executor of the Kirk Kerkorian estate), spoke about the privacy of Kerkorian and that this would be the first building to bear Kerkorian’s name. After the ribbon-cutting, the crowd mixed and mingled and then revealed the lighting of the building’s name with an explosive fireworks display.

“The new MEB (medical education building) will allow for modern medical education including simulation, standardized patients, anatomic dissection and team-based learning. The MEB will allow us to train the future physicians for our community in a state of the art facility. The building also will allow us to gradually increase the size of our medical school class,” said Marc Kuhn, MD, MBA, MACP, FRCP, dean of the Kirk Kerkorian School of Medicine at UNLV.

The new facility can accept up to 120 students, double the number that could be accommodated in the former building. Fewer students will have to leave the city to attend the University of Nevada, Reno, or an out-of-state school to attend medical school.

The second incentive is to attract, train and retain doctors and other medical professionals in Southern Nevada, broadening the health care system. The third objective is to bring affiliate businesses to serve the medical district’s students, staff and patients with the opening of the new medical school.

In a report developed by Tripp Umbach, a national consulting firm involved in the development of numerous medical schools, for NHBC, the medical school will generate general fund revenue through various taxes. As stated in the report, it is “estimated that every fresh dollar in economic impact from the UNLV School of Medicine would generate 4.9 percent in state general fund revenue. As the UNLV School of Medicine matures, the return on investment to the state of Nevada’s economy will grow.”

In 2030, the report estimates the UNLV School of Medicine is projected to generate $58.7 million in government revenue.

Completed two years before schedule and about $2 million under budget, the NHBC oversaw the project. The state-of-the-art facility classrooms are designed for smaller classes to accommodate different learning styles where students work in small groups. A large meeting room is available, but there are no lecture halls. Simulation rooms, including mock exam rooms, offer hands-on experience. The surgical simulation room, with a hand-washing station outside, features a two-way mirror for faculty to observe students.

Another notable feature is the high-tech virtual anatomy room. Gross cadaver anatomy class is when medical students perform on donated human bodies, a requirement for surgeons. In the state-of-the-art virtual anatomy room, medical students entering other medical fields can receive instruction on digitized structures of the body without incurring an exorbitant cost or finding available cadavers.

“(This was) one of the things the founding dean of the medical school did when she came to the school, which is a paradigm shift in medicine. This has been going on in academic medicine across the country past five to seven years,” said Schafer, during a tour for the media before its opening.

The centerpiece of the building is the landscaped terrace outside the interior amphitheater-style gathering space divided by floor-to-ceiling windows that can be opened like a garage door for an indoor/outdoor space.

“I love the progress; it feels exciting and see and feel something that will bring so much to this community,” Schafer said.

The Nevada System of Higher Education Board of Regents approved funding for the medical school on Aug. 22, 2014. The Kirk Kerkorian School of Medicine at UNLV opened in 2017, graduating its first class of medical doctors in May 2021.