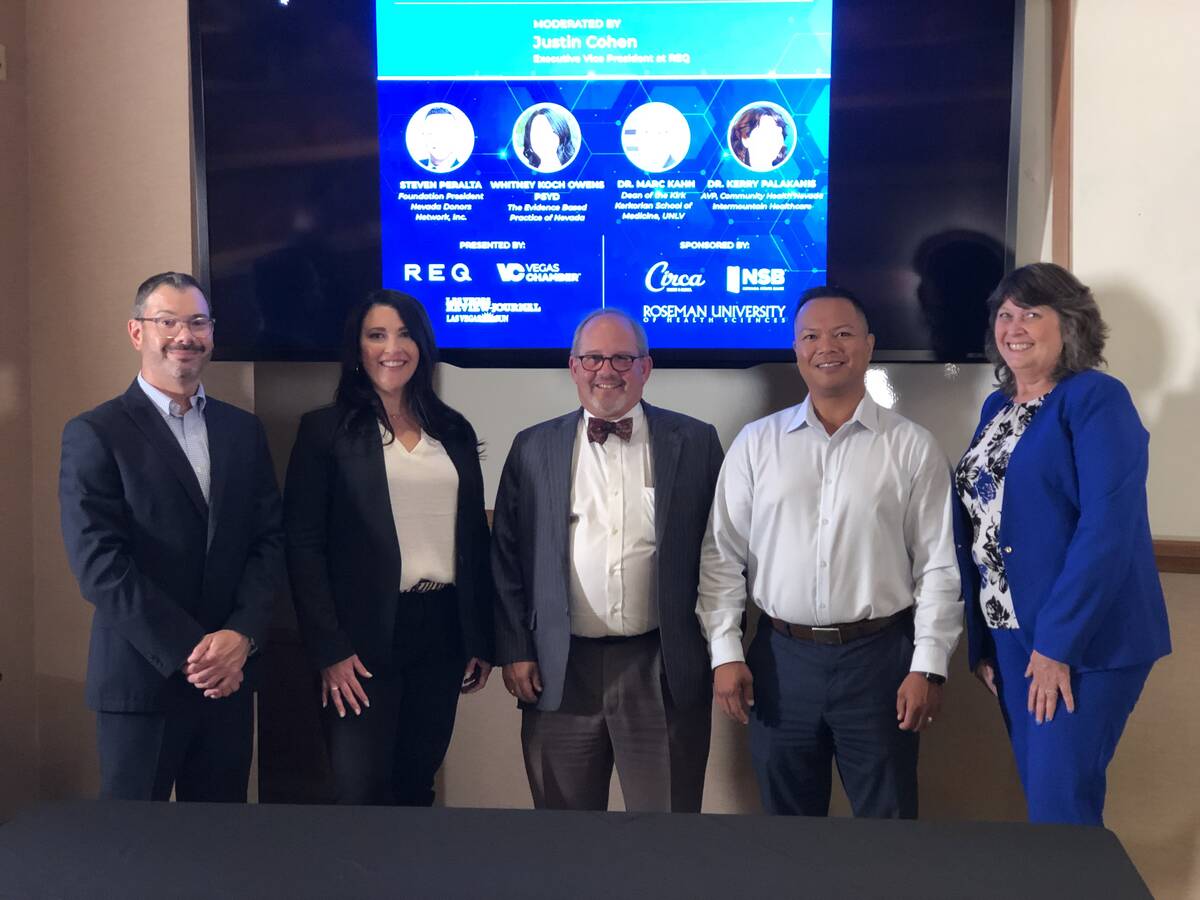 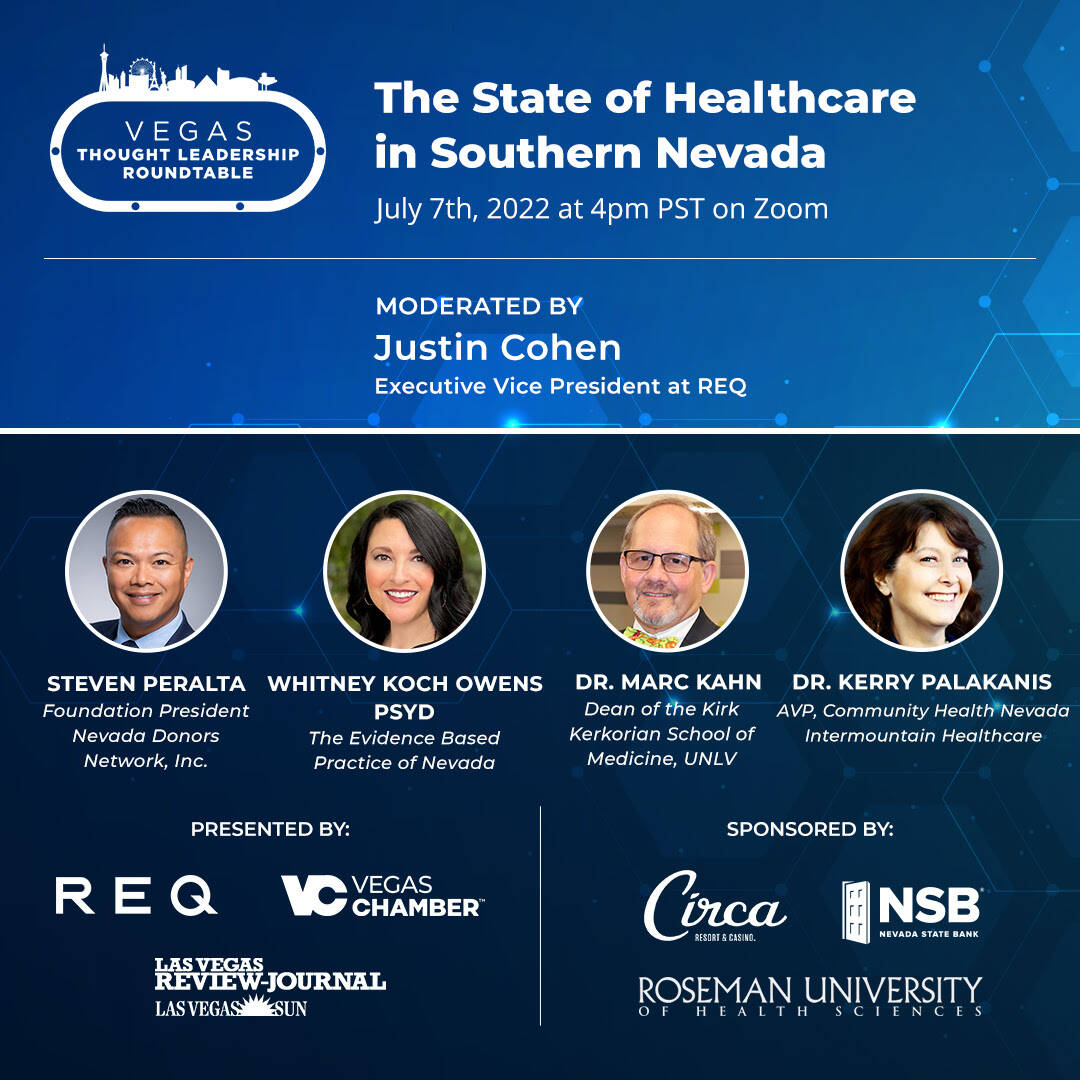 The Vegas Thought Leadership Roundtable presented by REQ, Vegas Chamber and Las Vegas Review-Journal hosted a discussion on the topic July 7 at Roseman University with Justin Cohen, executive vice president at REQ as the moderator. They touched on everything from how to attract more physicians in Las Vegas, expanding mental health and expanding the level of medical services provided, including rebutting the notion that people can’t get quality health care here.

“I think it’s our responsibility as a health care community to change that narrative,” said Dr. Kerry Palakanis, assistant vice president community health Nevada for Intermountain Healthcare. “I will lean on one joke with another and say what happens in Vegas, stays in Vegas. What happens in Vegas health care-wise should be treated in Vegas when and wherever possible. We have a lot of resources now, such as telehealth so if someone wants a second opinion or wants to have surgical intervention outside of our area (they can but) still the vast majority of their care can be provided here in the Vegas market. We have the ownership to change that joke to one that has a more positive spin and help consumers understand what is available here. We need to listen to consumers on what they want brought here that they don’t currently have available.”

Dr. Marc Kahn, dean of the Kirk Kerkorian School of Medicine at UNLV, said that’s a joke that keeps him up at night and when he hears about people having to leave the community for health care, it’s a problem that has to be fixed. But that won’t happen overnight, he added.

“Right now for a city of 2.5 million, there are services that aren’t offered that are offered to cities much smaller than us,” Kahn said. “We can go down the list, but let’s start with liver transplants and bone marrow transplants, and we can keep going. We have to improve the availability of comprehensive care and total care. Telehealth is great, but you can’t do a liver transplant by telehealth.”

Steven Peralta, foundation president of the Nevada Donors Network, said the world of transplants is in a dire situation. UMC has the only transplant program servicing the state, but that’s just kidneys, he added.

“More than 90 percent of all the organs we transplant from Nevadans are leaving our state and going to another transplant program,” Peralta said. “What keeps us up at night is hearing the statistics of us going to the bottom. We have great doctors and nurses, but we know our population has skyrocketed. Everybody wants to live and work here so we continue to press forward in changing this landscape. We are working with our hospitality systems and our community partners, and hopefully we can do the first liver transplant soon.”

Kahn talked about the need for residencies for those who graduate from medical school in order to build up the number of doctors and specialties in Southern Nevada.

Those residencies are predominantly funded by the Centers for Medicare & Medicaid, and Kahn said it has about 403 funded positions compared to New York state that has almost 17,000. Residency programs were frozen by a federal balanced budget act in 1996, but Nevada is a much different state than then, he said.

“The reason this is critical is that when we look at doctors per capita, we’re at the bottom across the board,” Kahn said. “There is only one speciality where we approach the national mean, and that’s cardiology. We need to get doctors to stay in the state, and we know that if you do medical school in Nevada you are about 55 percent likely to stay here and practice medicine. If you do your residency in addition to doing medical school here, that goes up to almost 80 percent. We have to expand residency positions, and we have to do it quickly if we’re going to have doctors (to fill the needs).”

Palakanis said people can graduate from medical school and not go into residency in the U.S. because there isn’t an available slot. She called it criminal that during a health care crisis that these graduates have no opportunity.

Mental health care was an important discussion point. Funding for mental health is political and critical, and Nevada ranks 51st in mental health care, Kahn said. The state needs more practitioners, and the health care community needs to work with government officials on how to deal with today’s needs, he said.

Whitney Koch Owens, a psychologist with The Evidenced Based Practice of Nevada, said the Nevada Board of Psychological Examiners worked with the state Legislature to ensure students who worked with licensed professionals were reimbursed by Medicaid. Insurance companies haven’t followed suit and aren’t willing to work with students, she said.

“Insurance companies create a huge barrier to health care from reimbursement rates and also the burden they place on practitioners, especially independent practitioners and make health care quite arduous and not a great profession to be in,” Koch Owens said.

Kahn said UNLV’s medical school gets more than 2,000 applications for 60 spots a year, which means there is interest in the profession. But he added there are barriers to entry for doctors that need to be fixed, he said. The licensure process in Nevada is “abysmal for physicians,” Kahn said. With a clean application, he said it took him months.

“We are one of the few states that don’t have any willing provider laws,” Kahn said. “They are laws that say third-party commercial payers cannot grant exclusivity to a given group of doctors. If I were today to hire 10 cardiologists, today, I couldn’t get them on a single commercial-payer package because they have already given exclusivity to other groups. We know monopolies aren’t good. That’s why they tend to be illegal. We need fixes in our state or we are not going to get the doctors that we need. We know monopolies don’t drive down costs, and they don’t drive up quality.”

Palakanis said Nevada should be declared a federal health enterprise zone where doctors can get medical school debt relief and employers can get tax credits for hiring. She also said Nevada needs to embrace health care instead of being the lowest denominator when it comes to expenditures.

“It needs to be part of what we do,” Palakansis said. “We have both sides of the state covered by medical schools that are phenomenal. Everybody wants to move to Vegas. We want those businesses in the health care industry to come here, too. The more that they come here the better we will be able to expand our opportunities.”

Kahn told the audience that Nevada needs integrated care like what is provided in other parts of the country. People shouldn’t have to see a surgeon who refers them to an oncologist who refers the patient to other professionals.

“It shouldn’t be that way,” Kahn said. “You should see a team of doctors and have care coordinated in one stop where people are talking to each other in teams. That’s what we need in this community, and that’s not done in this entire state.”

Kahn also said Las Vegas needs a stand-alone children’s hospital so doctors could take care of many childhood malignancies that have high cure rates. He also said Nevada needs to increase its Medicaid reimbursement rates to attract pediatricians to the state.

“We make it difficult to get a license and difficult if not impossible to get on commercial insurance payments and Medicaid, which is what’s left, is one of the lowest in the country,” Kahn said. “We are defeating ourselves every step of the way.”