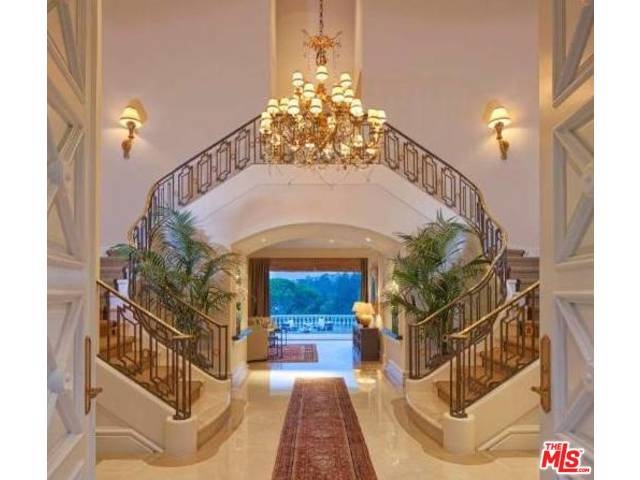 He has put the Los Angeles property on the market at $17.45 million after he bought it, Variety reports, just six months ago for $16.25 million.

The entertainment trade magazine said the mansion was built in 1991 and backs directly up to the Bel-Air Country Club. The 11,027-square-foot residence stands three stories tall at the back and contains a total of five bedrooms and eight bathrooms.

The home features a double-height entry with twin staircases, formal living and dining rooms, a paneled library, an oversized kitchen and a family room with a fireplace and wet bar.

Upstairs, a master suite with windowed walk-in closet/dressing room, dual marble bathrooms and views over the golf course looking toward the UCLA campus can be found.

There is also an additional guest suite on the lowest level along with a screening room and gym. There’s a staff bedroom and bathroom on the service wing of the main floor. A semi-circular terrace overlooks the swimming pool and spa, which hover over the golf course.

Variety said it was unclear why Wynn wanted to unload his Bel Air mansion so soon. However, it wasn’t the first time the Las Vegas-based casino executive has had a change of real estate heart when it comes to the selection of a Los Angeles residence.

Multiple sources said Wynn initiated escrow but bailed out on a 24,000-plus-square-foot mansion in Beverly Hills then listed at $43 million and owned by apparel mogul Armand. He reportedly took a serious look at financier Howard Marks’ Brentwood estate, which eventually sold for $33.7 million to Marks’ Oaktree Capital partner Bruce Karsh.

The Vegas Season Tour will bring giveaways, exclusive performances and Las Vegas showgirls to cities across the nation and Canada this summer.

On June 19, Kardinal Offishall, the fabulous Vegas showgirls and DJ Starting from Scratch hit the streets of Toronto to celebrate Vegas Season.

The pop-up, sponsored by the Las Vegas Convention and Visitors Authority, offered a glimpse into the carefree ambiance and unrestrained style of Las Vegas in the summertime, pointing to pool parties, nightclubs, entertainment, shopping and culinary offerings.

The tour is also stopping in New York, Chicago and Los Angeles.

CreditCards.com reports that 62 percent of Americans are losing sleep over at least one financial problem.

The most common money worry, according to the website, is saving enough money for retirement as 2 in 5 Americans said this keeps them up at night at least occasionally. Also, people ages 50 to 64 were the most concerned.

The second-biggest concern is educational expenses as 50 percent of 18- to 29-year-olds are losing sleep worrying about how they’re going to pay for schooling.

“The biggest change over the past eight years has been the steady increase in the number of people losing sleep over educational expenses,” Matt Schulz, CreditCards.com’s senior industry analyst, said in a statement. “That’s the only one of the five categories that has gotten worse since the Great Recession. Unless something slows the rapid rise in college costs, this could soon be Americans’ biggest financial fear.”

The survey, which was conducted by Princeton Survey Research Associates International, can be seen in its entirety at: http://www.creditcards.com/credit-card-news/financial-worries-losing-sleep.php.